My Summer As a Painted Turtle

California for a 20-year-old from Indiana is mystical—a dream world filled with granite ridges dotted with green and brown pines; miles of beaches sprinkled with blues, reds, and pinks deposited from the seemingly infinite ocean; and endless streams of sunlight that warm the skin and spirit.

When I was hired to work at The Painted Turtle, a camp at Lake Hughes, CA, for kids who have been diagnosed with serious medical conditions, I prepared myself to work in beautiful California. I prepared myself to travel around the state, taking in as much of its natural treasures as possible before my time was up. I prepared to bring back stories of spiritual journeys through the towering sequoias and whimsical follies on the beach.

I had not prepared to see the world’s unlimited, unlabeled, and unavoidable beauty as seen in the lives of Nando, Roy, and Nathan.

Nando embodied cool, maintained an “I’ve been here before” air about him.

Regardless of the unshakable California heat, Nando committed to a look featuring black high-top Vans with white accents streaking from heel to toe, black denim cuffed to reveal the socks covering his ankles, T-shirts that ranged from all white to black with “Thrasher” sprawled across his chest, and always topped off with a headband to maintain the center part in his swirling, dark hair.

Nando calculated when to show his personality but would always humor us counselors with a slight chuckle and sly grin whenever we would crack a bad joke or make fools of ourselves.

Nando knew camp, and you could tell.

Roy’s facial expressions provided the counselors with everything we needed to know about his thoughts and feelings. Roy was nonverbal—the few times he did speak his voice was faint, and he never spoke more than five words. He used a wheelchair to get around and braces to help support his legs. Roy’s fluorescent shirts and pants mirrored his personality.

Roy loved camp, and all you had to do was look into his eyes and his broad, beaming smile to see it.

Nathan loved theater. He knew by heart parts of his favorite musical, Hamilton: An American Musical. He would quietly perform the songs, accents and all, as we wandered from activity to activity.

Nathan quickly became a leader for the others in our cabin. He was always one to crack jokes and fuel the silliness camp promotes, but he was just as willing to be vulnerable, to provide eye-opening insights that forced us to think, to feel.

Nathan wanted others to feel the magic that camp had instilled in him, and he would do whatever it took to pass that gift along.

But Nando never danced with us, never felt compelled to participate in that, our favorite post-meal ritual. Which was fine. At camp we believe in challenge by choice. Everything is possible and encouraged, but nothing is forced.

Soft-spoken, Nando never embarked on long-winded responses or contributed to the pool of goofiness that amassed whenever the cabin had some downtime.

That changed when our cabin paired with another, and the campers in my cabin got the chance to mentor younger campers. Being a mentor gave Nando a way to show everyone who he truly was. He began engaging more with his cabinmates. He allowed more of himself to show. He was a tremendously supportive mentor, and would do anything to encourage the others.

He became the heart of our cabin. A grin that defined camp’s power and magic.

And by week’s end, Nando could be seen dancing next to the camper he mentored, joy in his face and moves. Nando was always compassionate, loving, and intelligent. He was just never given the chance. Camp gave him that chance.

Roy rarely stopped smiling. From shooting arrows at the archery range to swimming in the pool, Roy’s smile came to be standard equipment.

Nothing ever got to Roy—until he encountered the high-ropes course.

The most emotionally and physically demanding activity at camp, the high ropes force campers to face their fears and doubts, to search for courage they may not know is within them. For a camper who relies on a wheelchair, the high-ropes course can seem impossible.

For Roy, the ropes course was the impossible.

Under a cloudless blue sky we harnessed up and prepared to take on the ropes course, Roy included.

He was nervous. The beaming smile faded to a frown. He had overcome so many challenges in his life, but you could tell that the ropes course was something else. Bigger. Still, Roy prepared to take on the challenge. We transferred him into the black mesh sling that would cradle him as he ascended to the top of the course, where he was placed into the wheelchair waiting for him.

I followed behind to lend a helping hand. A tension-filled exchange of commands flew from counselor to counselor to ensure that Roy was safely locked into the rigging. The stress showed on Roy’s face. He stared off into the distance. Then he reclined in his sling and was guided to the ledge of the 30-foot-high platform, and on a count of three he was released to a whiz of cable and rigging.

For a few brief moments Roy achieved a freedom that kids with his conditions rarely, if ever, feel. He was flying.

The smile that defined Roy returned as he descended. Kids who come to The Painted Turtle camp are given the chance to live without labels, and, as the camp’s founder Paul Newman put it, “raise a little hell.”

Roy told the world that anything is possible louder than any of us could shout it, and all through a smile.

Nathan’s week at camp was nearly over, and the emotion-filled Bale Closing (we call each cabin a “bale,” the collective noun for a group of turtles) hit him with that realization all at once. Bale Closing was a time for reflection, and Nathan had a lot to think about. He had met and made friends with so many others dealing with the same condition as his own. As Bale Closing finished, the guys in our cabin began making our way to closing campfire, the official end to camp. Nathan walked alone, his head dipped and eyes closed.

I worked my way up to Nathan to check on him. We talked about some of the moments he had experienced with his fellow campers, and before rationality or pride could intervene, we were walking side by side, arms slung over each other’s shoulders, crying. Not tears of bitterness or regret, but tangible reminders of camp’s importance in a time when joy and love are hard to find. As we neared the campfire, Nathan mustered enough composure to mutter, while shaking his head, “Best week of my life.” 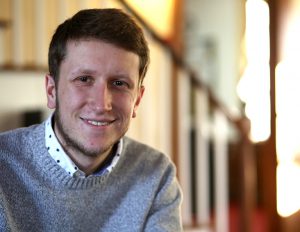 Nando, Roy, and Nathan each have given me more than I ever deserve. They taught me how life should be lived, regardless of our circumstances. Nando’s love, Roy’s smile, and Nathan’s vulnerability each hold more meaning than any of those solitary moments on a trail or beach parties I had imagined for myself when I dreamed of California. They taught me to be true to myself and love completely and wholly, to live unlabeled and unlimited, to live unafraid, to be emotional in times when emotion and genuineness are needed more than ever.

They teach me to be a Painted Turtle, wherever I go.

Aaron Webb is a philosophy and pre-med major and received the Dr. Paul T. Hurt Award for All-Around Freshman Achievement at Awards Chapel last April. The Painted Turtle is a summer camp program in the Los Angeles area for children with cerebral palsy, hemophilia, kidney and liver disease, and a variety of other chronic and life-threatening medical conditions.