Bennette ’19: At Home Off Shore

SaVonne Bennette ’19 knew next to nothing about Nantucket when he applied for the Nantucket Bike Tours internship on the island. “I didn’t even know it was an island.” He smiles.

But you can’t tell that was ever the case as he leads this bike tour on a warm, sunny Thursday morning in July. He’s a natural on the bike, calmly surveying the road in front of him while offering the tourists in tow a smile or an encouraging word. His delivery is calm, confident, and knowledgeable.

He’s a guy you can talk to.

The eight adults on the tour are riveted as the junior rhetoric major from Carmel, IN— via Portland, OR, and Chicago—talks about Absalom Boston, the first black whaling ship captain; Frederick Douglass’ first speech to a white audience at Nantucket’s Athenaeum; the island’s Quaker heritage and history of equality among the sexes and races and stand against slavery and support for women’s suffrage.

“It’s amazing what being just 30 miles offshore can do for you,” SaVonne says.

Leading the group down Woodberry Lane he casually points out a classic Nantucket-style home with a cobblestone driveway, a wraparound porch, and a guest house.

“That’s the house I’m going to buy someday when I make my wealth and come back,” he calls out to the cyclists. “You’re all welcome to visit!”

SaVonne reflects on why he feels so at home in a place he barely knew two months ago.

“Where I’ve grown the most is in the way I think about myself. I used to keep pretty much to myself. I never felt like I had a reason to smile at somebody I walked past on the street or to get to know somebody I met in a coffee shop. But you just don’t know how simply speaking to someone can change their day.”

For SaVonne, that change began on day one when he was waiting for Jason to pick him up at the Handlebar Café and one of the staff members approached him.

“I’d never met Avery before—I thought he was going to tell me to move my bags off the bench.” SaVonne laughs. “Instead, he asks my name, he’s friendly, we start talking.” 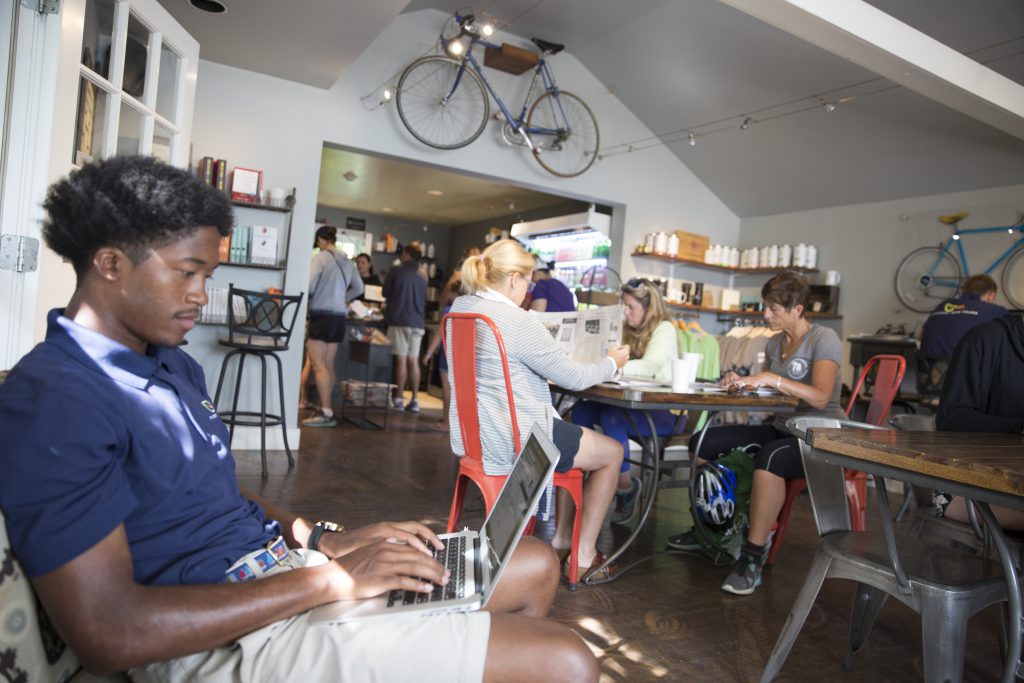 “It was a wake-up call the first week we were here, figuring out everything we’d be doing—that this was about so much more than bike tours,” SaVonne says. “We learned to be comfortable with being uncomfortable.”

That discomfort led to a new understanding of the place where he was living.

“The only thing I was expecting when I came here was that, because Nantucket is such a wealthy area, the people were going to be a little snobby. But it’s really not that way at all. The people here are rich in character, very friendly.”

What he prizes most about Nantucket is the sense of belonging he felt there.

“The way the people of this community interact with each other is like no place I’ve ever seen before. They treat each other like best friends.”

He has tried to bring that back with him.

“I was in the club, not very active, and Kaz Koehring ’18, a friend of mine who was an intern at Nantucket a couple years ago, suggested I do it. I was hesitant; Kaz pushed me a little, and it’s been good.

“It’s good to have guys like Kaz and Joey around to give you that push you sometimes need.”

“I was going to get a job in business straight out of college, but now I believe I’ll move to China, teach English awhile, then take the business track internationally.”

“I feel like I left Nantucket a better person,” SaVonne says. He believes he has a more positive outlook and can now “picture the cup half-full instead of half empty.”

It is amazing what being just 30 miles offshore can do for you.