Leading and Learning “Away Off Shore”

Leveraging the power of “emotional intelligence” to become a business and community leader, Jason Bridges ’98 hosts an internship program that is transforming Wabash students’ lives.

It’s a breezy Thursday afternoon in July on Nantucket Island, the hydrangeas are just a week past peak bloom, and Cole Crouch ’17 is steering a pickup down Cisco Brewery’s tree-lined gravel lane toward a sun-soaked swirl of tin roofs, tourists, townies, food trucks, and beers of varying shades.

He parks at the edge of the Belgian-block courtyard and smiles as he hops out of the truck, calls out to a guy in a black Cisco Brewers T-shirt pulling kegs from the storeroom, and walks toward the bikes he’s here to retrieve.

He takes his time, too, transforming the crowd into a procession of one-on-one introductions. He greets the guy checking IDs at the door by name.

Those who knew him on the Wabash campus as the quiet, intense, and studious editor of The Bachelor might be surprised to see this joyful, gregarious Cole Crouch managing Nantucket Bike Tours.

Cole will tell you the change is intentional and heartfelt.

“I’m thankful for the people around me,” he says, “I’m happier than I’ve ever been.”

It’s an awakening familiar to the 14 Wabash interns who have worked for Nantucket Bike Tours (NBT) and lived with Courtney and Jason Bridges during the past seven summers.

None of this happens by accident, yet none of it would have been possible without one.

In October 1991, Jason was a 15-year-old sophomore riding with two friends to Wapahani High School near Selma, IN, when the driver lost control of the car and hit a utility pole. Jason’s skull fractured in five places; his brain was hemorrhaging.

“When my family arrived, doctors told them to expect the worst,” he says.

Two weeks in intensive care and a month later, he walked out of the hospital.

“We all felt it was a miracle,” he says. “But I had some brain damage. I couldn’t think as well, I couldn’t remember very well, and everything was slower. I was a straight-A student before the accident, but now I was struggling for D’s.”

Jason credits faculty, friends, and family for helping him through high school, and though he was challenged at Wabash, he made the Dean’s List his senior year.

But along with the obstacles came a gift.

“Right after the accident I couldn’t move very fast. I started watching more. I found I could practice being aware of where I was in a room, body language, the emotions I was feeling, and self-manage them in real time.”

He didn’t know this “practice” had a name, but Jason was developing his “emotional intelligence (EQ).” New York Times science writer Daniel Goleman defines EQ as a set of skills, including control of one’s impulses, self-motivation, empathy, and social competence in interpersonal relationships.

When Jason was 23, he found similar principles in a much older book—Dale Carnegie’s How to Win Friends and Influence People—and began to use them in his life and work.

“I saw it as my golden ticket—I didn’t have the IQ; I could never outsmart anybody. But I could do this.

“These are the things that really matter in life but they’re not taught at any school: Who do you want as a friend? What do you want in a spouse or in a co-worker? Nobody ever says, ‘Man, if you only had a higher GPA then we could be friends.’ You want trust, honesty, gratitude.

“I was working in the service industry; I had grown up in a restaurant, so I applied this throughout my 20s and I started to get better and better the more I practiced.”

He was about to find a place to teach it.

“It’s called a ‘pirate’s toenail,’” NBT intern Joey Lenkey ’19 says gleefully. He is describing a shell to the family of four he’s leading on a bike tour stopped at Nantucket’s Brant Point Beach. “Can you find one?”

The kids race to the sand and spread out to find the shell, their parents not far behind.

Jason’s mantra for the interns is “Be Interested, Not Interesting (BINI).” He stresses listening and paying attention to others’ needs. Later in the tour, when Joey notices that the mom is lagging behind, he pedals back to encourage her up a cobblestone hill. There are no small moments.

But when you’re leading kids, interesting matters, too, and you can feel the energy level rise as the family hunts for the pirate’s toenail. The kids are only mildly disappointed when Dad is the first to find one!

courtney and jason met in 2009 while competing in Nantucket’s annual Rock Run 50-mile endurance race. They dated long-distance for a year while Courtney finished grad school. She had returned to the island to teach when the couple took a bike tour in Boston that would reroute their lives.

Jason: And we really had a great time.

So on the two-hour, fifteen-minute ferry ride back we’re just chatting, and one of us is, like, “Why doesn’t anyone do this on Nantucket?” 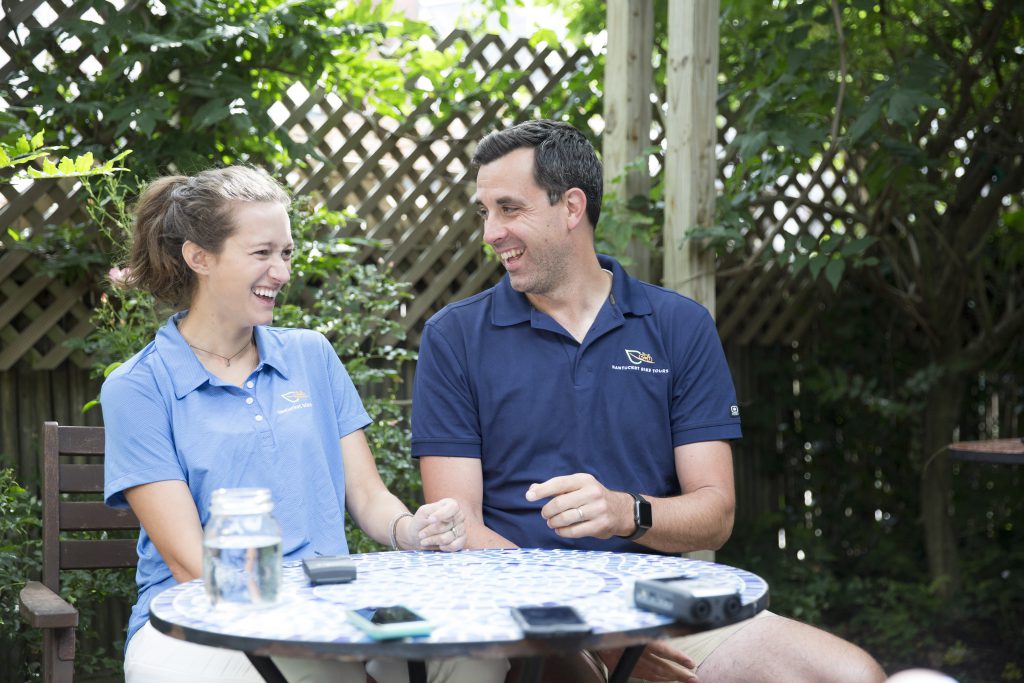 We pulled out a piece of paper and started sketching it out—“You could go here, and here.” But my mindset was for someone else to do it.

Jason: And then you said…

Courtney: But I think we were ready. He’s always been an entrepreneur at heart. He was running a business as though he was the owner, so it was time to take on the challenge. I was a teacher, so I had my summers free to help with the bike tours.

Jason: Right, that was big.

Courtney: I believe in you.

Jason: I think she believed in me more than I did.

Courtney: And we went for it. Before we knew it, we were building 25 bikes in our living room and opening the next summer as Nantucket Bike Tours.

There was one problem: finding people to lead the tours for such a short summer season. Enter the Schroeder Center for Career Development and the Dill Small Business Internship Fund.

“I hadn’t really been in close contact with the College until this point, and I didn’t know this program existed,” Jason says. “We had two applicants the first year and Ryan Cronin ’13 said yes.”

Ryan worked, lived, and ate meals with Courtney and Jason. Jason taught him accounting, marketing, and strategic planning. But Ryan was learning something more essential.

That changed the internship program.

“As a 20-year-old, Ryan didn’t have a lot of experience with EQ,” Jason says. “I just naturally started coaching him. He was ripe for it. And that’s when I saw this could be an experience where they’d learn these skills they could use for the rest of their lives, no matter what they did. At first the internship was 90 percent business, 10 percent emotional intelligence. Now that’s flipped.

“We teach the value of taking the focus away from yourself and toward others. It’s about asking questions, being curious, but it has to be genuine and sincere. You can’t manipulate. All of this builds up to becoming a community leader.”

Jason’s confidence as both an entrepreneur and a leader has grown with each passing year. He received the most votes in the island’s Board of Selectmen election in April, is a board member of the town’s New School, and serves as the town’s outreach manager. And in 2014, he and Courtney opened a second business on the island, The Handlebar Café.

“Today when it comes to running a business, I’m like, ‘I’ve got this! We can do this,’” Jason says.

The Handlebar Café is definitely not a Starbucks.

A “community space disguised as a coffee shop,” it’s Jason and Courtney’s take on emotional intelligence incarnate with—if Facebook reviews are to be believed—the best morning buns and coffee on the island.

With its picture window up front, the building feels more home than business. There are bikes on the walls and a mix of comfy couches and bar stools, and customers are greeted the moment they walk in and the screen door closes with that “thwack” only wooden screen doors can make.

It’s an intimate, relaxing place where Jason and Courtney hope “islanders and visitors alike can connect with the world on their own terms.”

On this warm July evening, Cole, Joey, and fellow intern SaVonne Bennette ’19 are walking from the café down the brick walks past the manicured hedges and window boxes full of hydrangeas to meet Jason and Courtney for seafood at The Charlie Noble restaurant.

Courtney suggests a vegan dish to Joey while SaVonne razzes him for being vegan and Joey razzes SaVonne for ordering meat, meat, and more meat. The friendly teasing continues as Joey recalls the night it was his turn to fix dinner a few weeks ago. He decided on campfire meals, got the fire started late, and no one got to eat until 9:30.

The entrées arrive and plates are passed around amidst the conversation. Courtney swaps food with a couple of the guys—“I know you don’t like asparagus, so I’ll take it, you can have this”—and Jason—“Try these carrots, they’re so good!”

For five weeks they’ve eaten most of their meals together. Joey says this is the time they feel most like a family—and he hopes to bring what he’s learned back to campus when summer ends.

Jason calls the internship program “one of the best things I’ve done.” He believes Cole, SaVonne, and Joey will carry their new skills and vision to whatever community they live in.

But right now, this meal, this conversation, this community—this Wabash family in Nantucket—is enough.