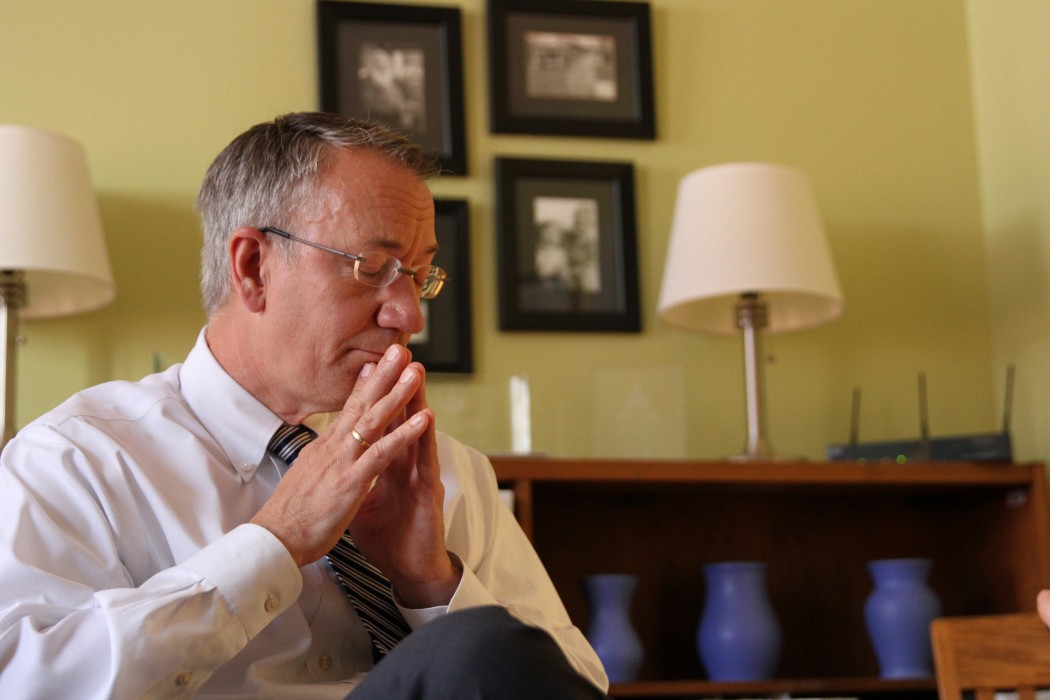 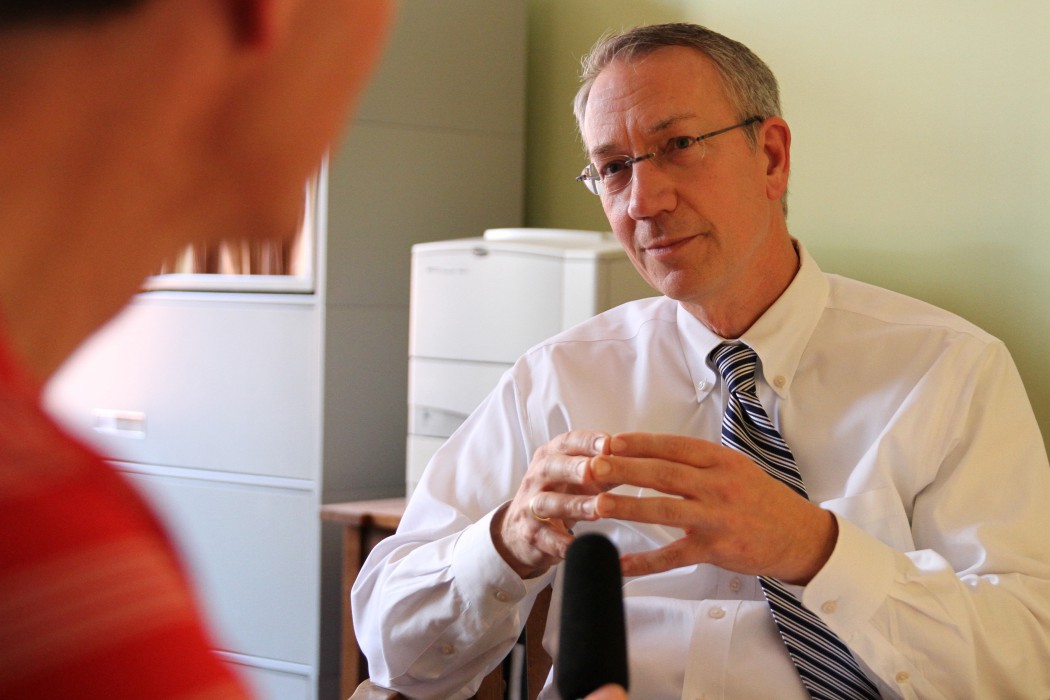 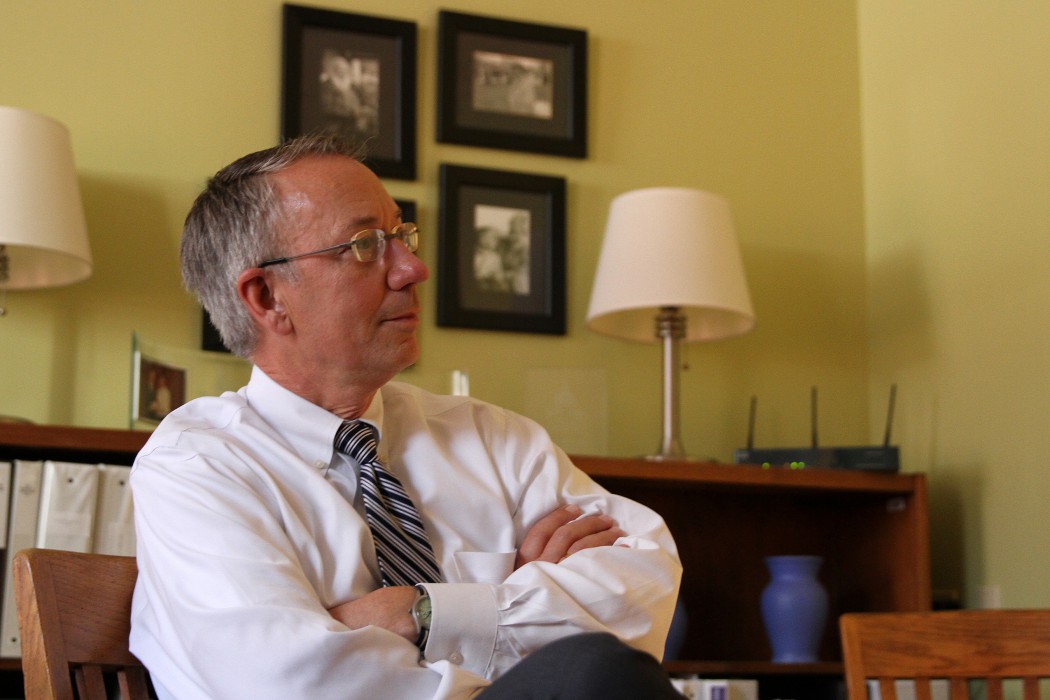 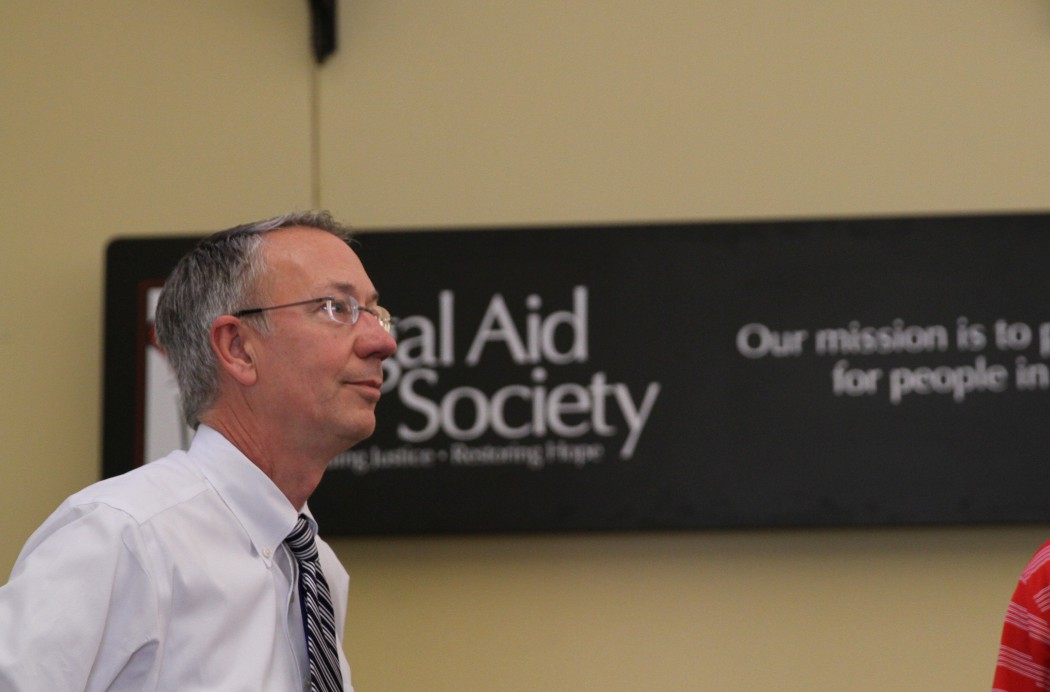 When he retires at the end of 2015 as executive director of the Louisville Legal Aid Society (LASL), Jeff Been ’81 will have established a legacy of using the law to help those in need.

The founder of the HIV/AIDS Legal Project in Indianapolis, Been did similar work at LASL and was named executive director in 2006. Under his leadership LASL doubled the number of clients served annually and established more than 15 collaborative partnerships to help clients on economic, housing, or family law issues. The group received more than $1.2 million in technology grants to expand access to legal services for low-income clients.

But the true impact of LASL’s work isn’t in numbers, but in the transformed lives of clients like Brenda Hall. She came to LASL facing a wrongful eviction.

“I was heartbroken, I was a nervous wreck,” she recalls in documentary for the organization. “It touched my heart that someone cared that much about me and my kids.”

“Oftentimes the legal issue which they’re confronting is, for a lawyer, not that complex,” Been explains. “But in their lives it’s a tremendous burden, and they don’t know how to get out of that.”

For Verette Hyder, a victim of identity theft who turned to LASL, the experience was liberating.

“My attorney freed me from being oppressed. It’s a time in your life when you feel like nobody. But by taking my case and going to court, he let me be somebody again.”

Earlier this year Been was honored for his work by the Kentucky Bar Association, but he deflects praise to the generosity of the people of Louisville who “understand the reason we have safety net organizations, the reason we are here for our neighbors,” and to the 39 men and women at LASL.

“We have an incredibly talented staff, and they know that when you speak from the heart, you can connect with any person. That’s what forges the bond of trust.

Been’s sense of community and trust was born of the work ethic he learned growing up on the family farm in Delphi, IN, and nurtured by the legal career of his cousin, Delphi attorney Courtney Justice ’63.

“My father was a carpenter by trade, and he took jobs out to make money while we helped maintain the farm,” Been recalls in an upcoming article in Wabash Magazine. “Mother was there hauling corn and bailing hay; we would feed livestock and do our chores. We could play, but you worked first.

“It was a community—you could go up and down the road and find the same thing. There were tasks to be done, and others were depending on you.”

Been’s introduction to Wabash came via his cousins, Courtney and David Justice. As a six-year-old boy he attended Courtney’s Commencement, and when he was in high school, Courtney ’63 joined Been’s English teacher and counselors recommending Wabash. Courtney was also his first role model as a lawyer.

“Courtney was really there for the small guy, the underdog. He showed me what good you could do with a law degree.”

An English major at Wabash, Been echoes his mentor Professor John Fischer’s characterization of the College.

“He recently spoke of Wabash as ‘intimate,’ and it was that for me. Whether it was sharing late night chats with fraternity brothers, or opening night jitters in the green room before a play, or sitting in Con-Law class with Professor Ed McLean, you could make mistakes and live another day. You knew people cared and supported you.”

Fischer was chief among those people for Been.

“John would see a student on campus and say, ‘You need to come to dinner at my house. John’s invitation to a meal was really an invitation to share and relish life. And he has a special gift: He can see into a soul and see a potential and nourish and encourage that. He did that for me and for so many Wabash students.”

Been has never been one to plan his life, much less his vocation.

“I don’t know that I found the law as much as it found me,” he says. “The law and working in the legal arena became a way to discover new communities, appreciate different experiences.”

Working in Chicago as a law clerk for James Parsons—the first African- American federal district court judge—taught him “how important it is that our courts be open to all people, regardless of economic circumstance.”

In his second year at Indiana University—Purdue University Indianapolis Been worked at a clinic for Indiana Legal Services, representing a family whose child was being taken away from them.

“The action brought against them claimed the child was being deprived of nutrition, but the parents were putting on the table the best food they could. I thought, Man, I’m going to screw this up. But we won, and that was my first experience of understanding what good I could do with a law degree.”

From 1984 to 1987 Been taught legal writing at the IU School of Law, and in 1991 he founded the HIV/AIDS Legal Project. When he and partner Eric Graninger moved to Louisville he took on similar work for LASL.

“I got into AIDS work because I saw a need and nobody was pitching in,” Been says. “It wasn’t organized, and I could see the need within the circle of friends I had. You just answer the call.”

Been and his team had to fight to establish adoption rights, custody, and patients rights. When they began there was only one nursing home in Kentucky that would accept patients with HIV. He traveled the state talking to nursing home administrators.

“I would tell them that refusing these people wasn’t only against the law, but it was wrong. These patients were people facing the last days of their lives.”

Fighting for one patient, in particular, taught him that “there’s point in a person’s life, whether you’re poor, rich, pleasant, unpleasant, you’re entitled to the same level of care and compassion as everyone else.”

Memories of those he worked with during some of the most trying days of the HIV/AIDs epidemic move him still.

“When I announced my retirement, I got a letter from a woman whose brother I had represented,” Been says, tearing up. “He had died of AIDS, but she wanted to thank me. She said, ‘You were just great.’ Somehow I had helped in ways I didn’t realize at the time.

“I feel very privileged to have done the work I have done. I’m proud that work is going to continue and that I’ve been able to leave the organization so that it has a stable and secure future.”

As Jeff Been ’81 ends his nearly three-decade tenure with the Legal Aid Society of Louisville (LASL), we asked four of his most recent Wabash interns to describe him:

Jacob German ’11, Barnes & Thornburg, Indianapolis
Jeff’s lasting impact on me really came from his desire to help anyone, whatever the time or circumstances. He had confidence in the Wabash men to come and work on complicated projects that made actual impacts on the lives of poor people in Louisville. He continues to check in and offer advice as I launch my own legal career.

Jacob Burnett ’15, Project Manager, Oxford Pro Bono Publico, UK
That summer at LASL unleashed and channeled a floodgate of passion in my life. Jeff is able to articulate the need to care for all people of a community, and he goes out of his way to truly help anyone who needs it. I wouldn’t be where I am today without his generosity and mentoring.

Seton Goddard ’15, Cigna Global Health, Wilmington, DE
On my second day working at LASL, Development Director Julia Leist and I attended a meeting for nonprofit fund-raisers. I sat down next to a woman from a local organization and told her where I was working. She looked at me with a huge smile and said, “So, you must get to work with Jeff Been? If I could be half the leader that Jeff is, I would be one hell of an executive director. You’ll have a hard time finding someone who has as much respect in Louisville as Jeff Been has.”

Nicholas Maraman ’10, Legal Aid Society of Louisville
Jeff hired me as both a summer intern and an attorney after law school. He has been a role model for me. He is polished. He is poised. He is kind and generously shares credit and offers praise. And it all seems effortless. Jeff Been is Legal Aid, and it is hard to imagine the Legal Aid Society without him leading us.