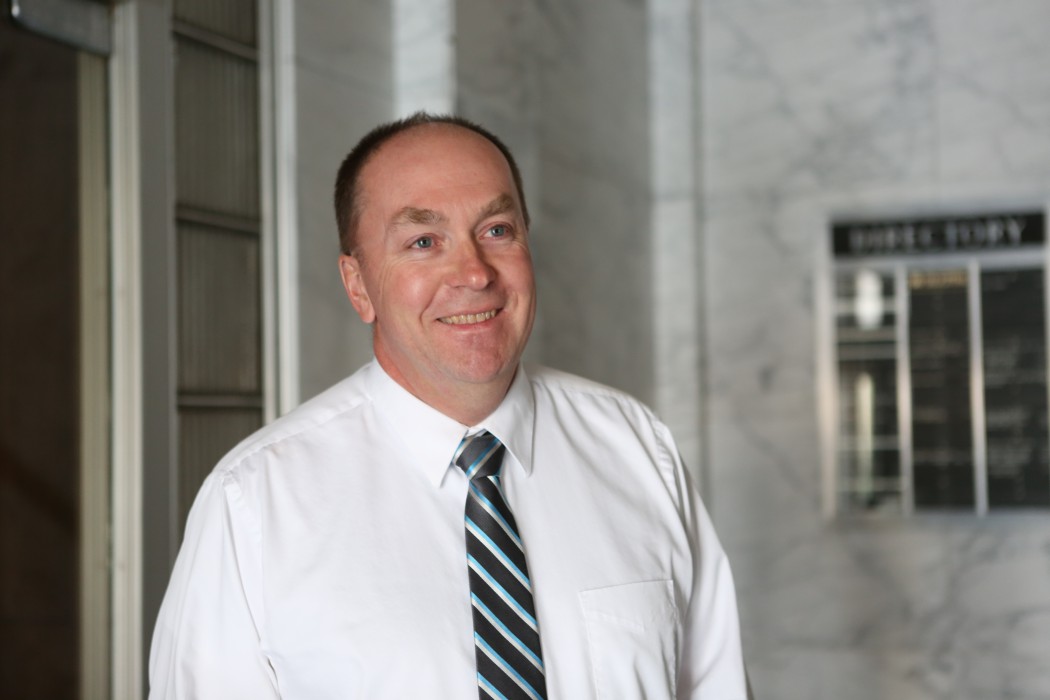 Mayor Todd Barton ’00 talks about the future of his town in the marble lobby of the soon-to-be-renovated Ben Hur Building. 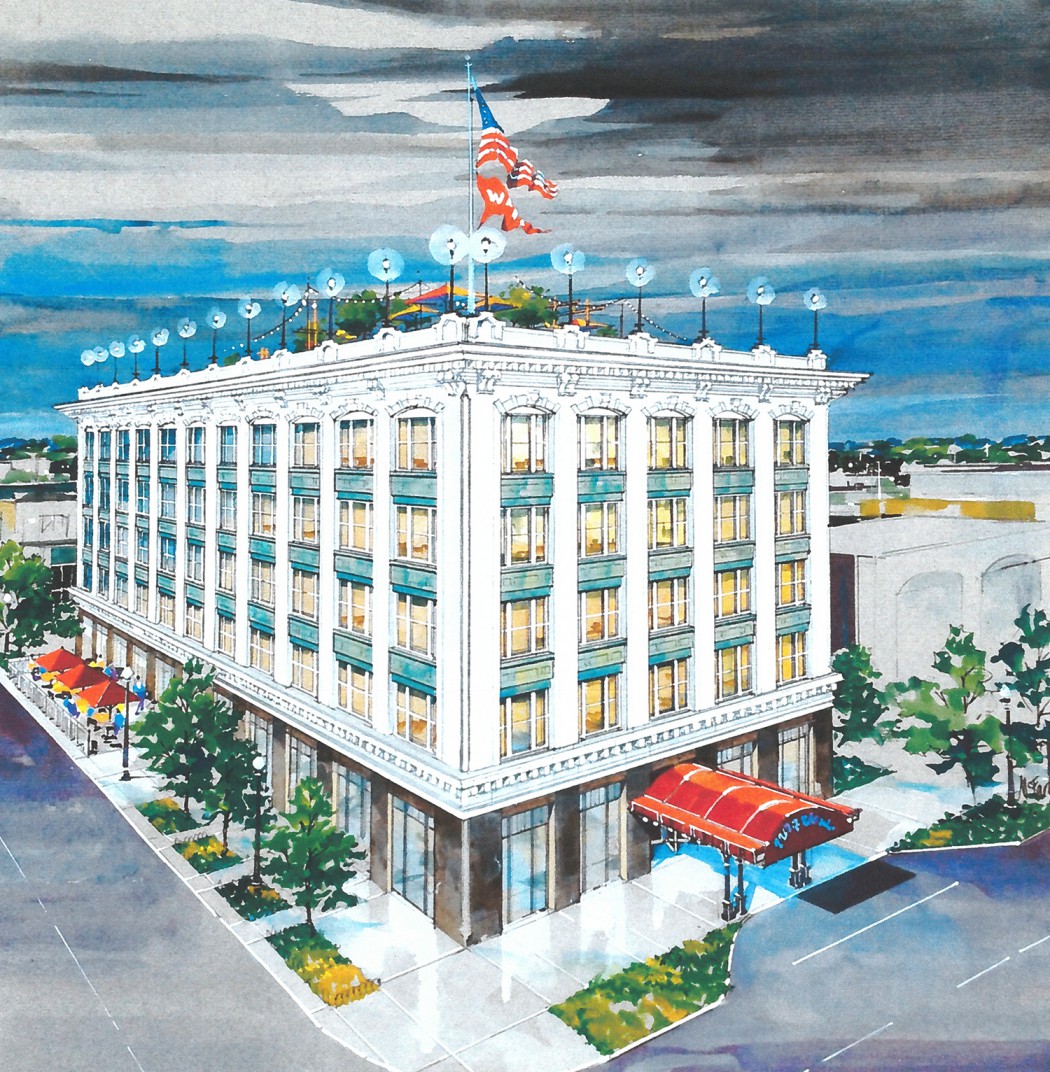 Artist's rendering of the renovated Ben Hur Building, which includes a restaurant, condos, hotel rooms, and a rooftop terrace. 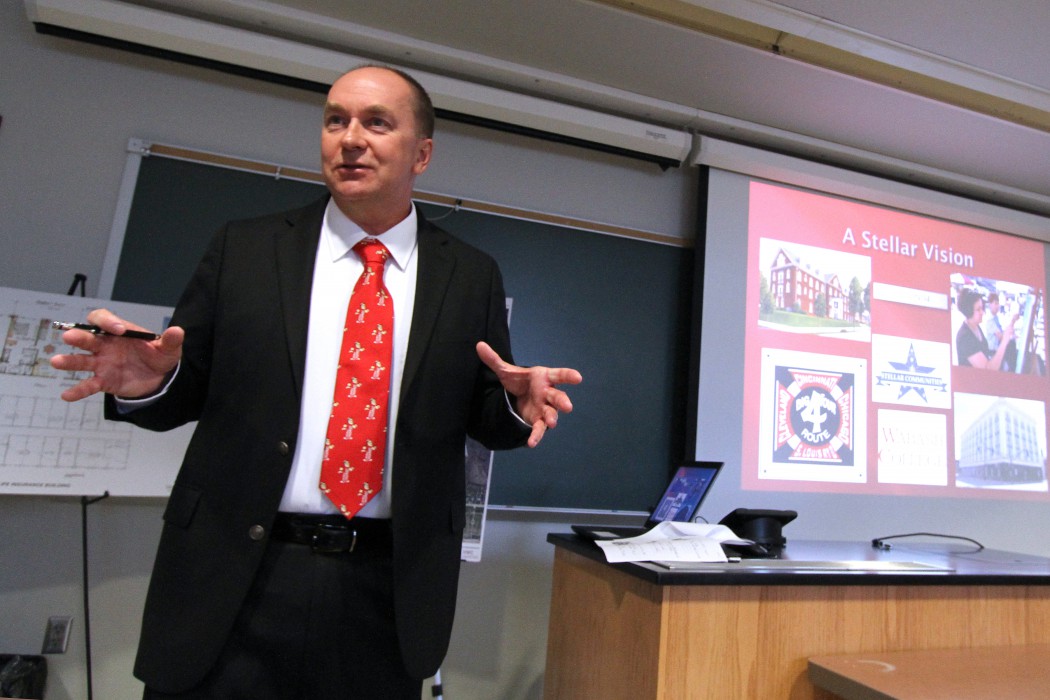 Barton brought alumni up to speed on the Stellar proposal during last summer's Big Bash Reunions.

A Crawfordsville-Wabash partnership with deep benefits for both, the Fusion 54 building will house County Visitors Center, the Wabash College Center for Innovation, Business, and Entrepreneurship, Chamber of Commerce, Indiana West Advantage, small business incubator space, a senior center, a volunteer center, light retail space and a coffee shop near the College’s southwestern entrance. 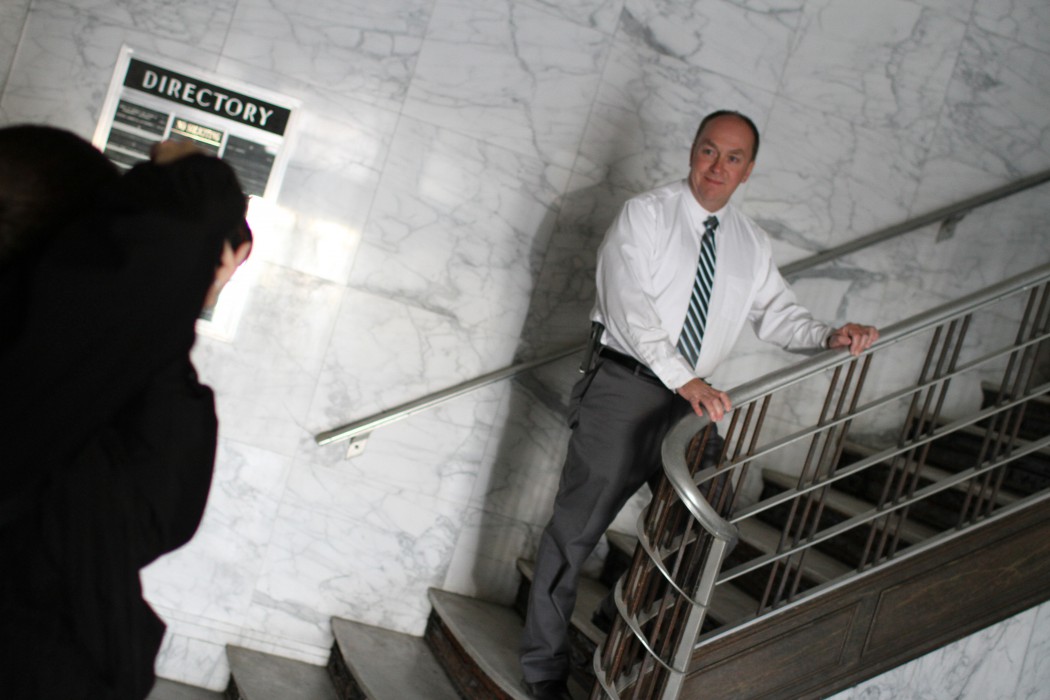 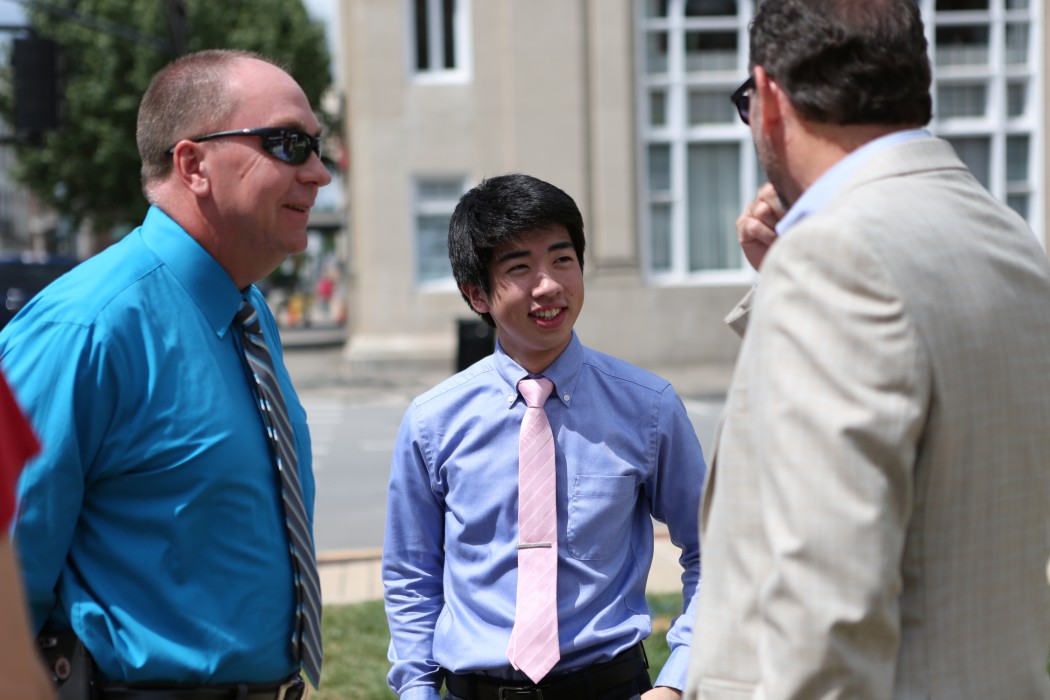 Several Wabash students worked with Mayor Barton on past Stellar Designation efforts, and Niki Kazahaya ’18 worked on this year’s application.

Adjacent to the already-successful location for the Farmer’s Market, the Pike Street Pocket Park will be used for everything from performances to lunch in the park.

A ground-level view of the pocket park. 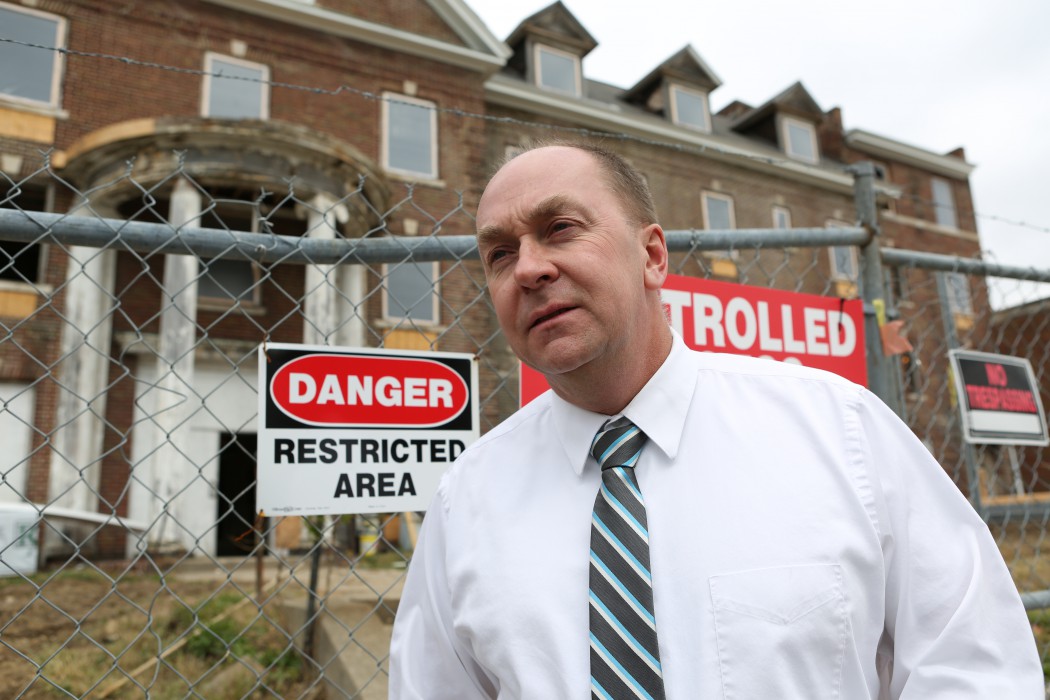 Barton at the renovation site of the old Culver Hospital. 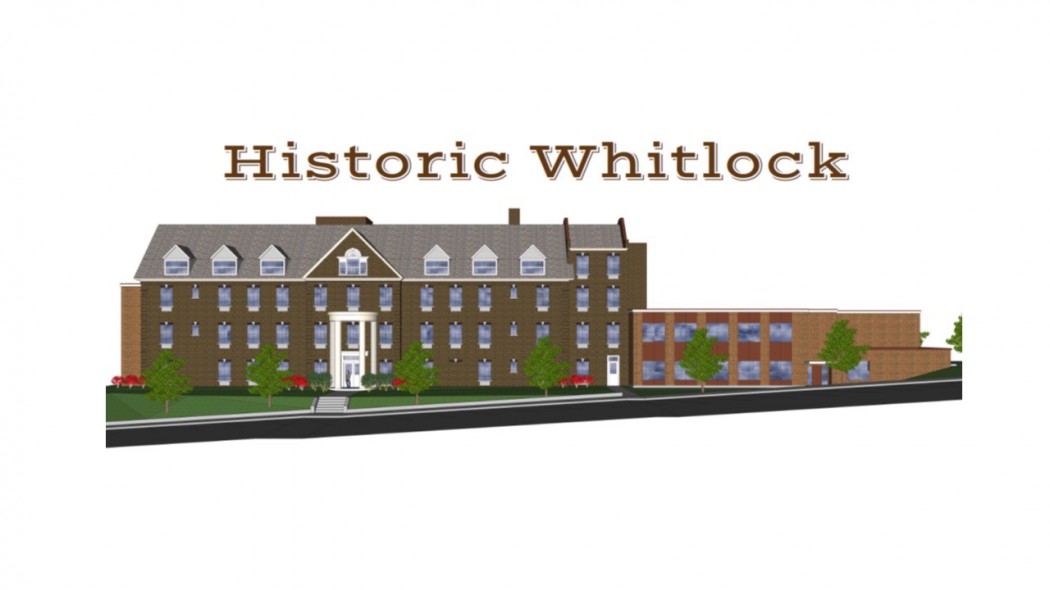 The rehabilitation of homes in the Historic Whitlock neighborhood is a companion project to the Culver Hospital renovation that will dramatically boost the appearance of the area adjacent to downtown. 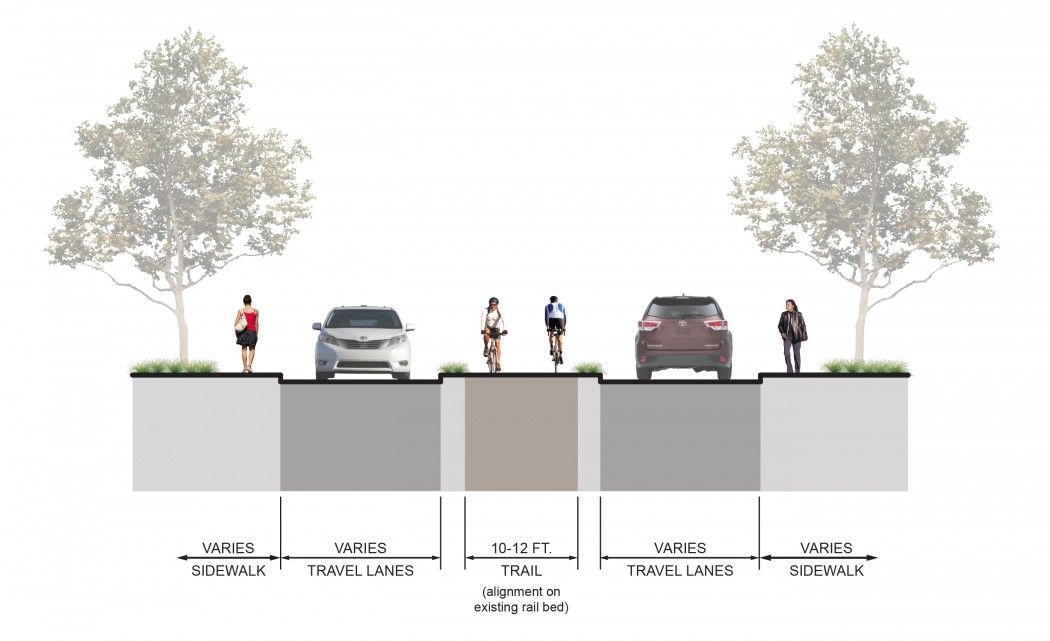 The Big Four and Downtown Loop trails will extend the five-mile Sugar Creek Trail through the Wabash campus to downtown and the Amtrak station and will create bike/pedestrian friendly streets. 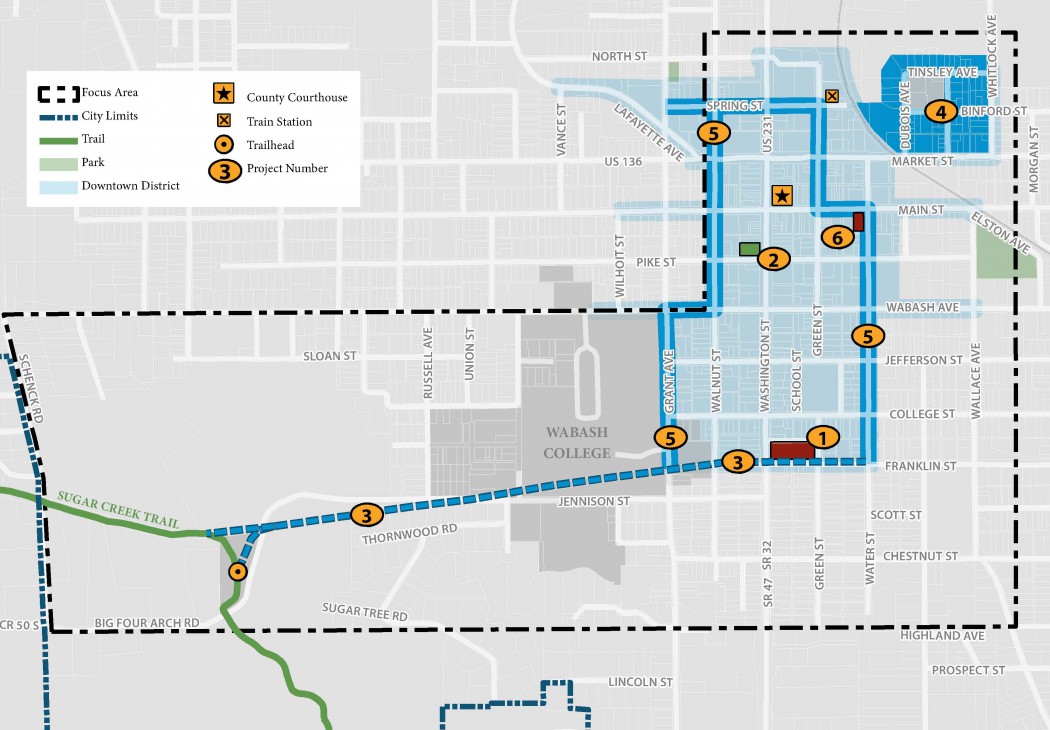 Locations of the Stellar projects.

Crawfordsville will look a lot different in the coming few years thanks to a big win by a team led by Mayor Todd Barton ’00. Those changes include the strongest partnership yet between the city and Wabash College. Here’s an excerpt from our story in the upcoming edition of Wabash Magazine.

Last August Crawfordsville was on the verge of scoring one of the biggest economic victories in the city’s history, and Mayor Todd Barton ’00 didn’t have a speech.

He didn’t want to jinx it.

“I’m superstitious,” Barton admits as he recalls last summer’s announcement at the Indiana State Fair of the 2015 Indiana Stellar Community designee. The city had applied for the designation—an award that could bring the city $17 million in grants and access to state funds—five times. We’d been a finalist once before. And Barton always had a speech ready.

That decision was even more ironic because the city’s previous applications had been penned by consultants, but this one was all Barton and City Planning Director Brandy Allen.

“Consultants do great work, but each year we didn’t win I’d look back and think, Those weren’t our words. They didn’t have the passion and the feel that came from the heart, from Crawfordsville,” Barton says. “So this year we decide to write it ourselves, and we went below the surface. Most communities talk about the nice things they’re going to do, the pretty things, but we said, ‘Those things are great, but we’re also going to change the way we do business.’”

It was a risky decision that could put the city either over the top or out of the league.

The former Crawfordsville fire chief and Wabash political science major thought it was time to go for it.

“When I chose to run for mayor I was so upset with the mentality that had crept into our local leadership, that we should just roll over and die, that we don’t deserve to be better,” Barton says. “I don’t believe that. I don’t roll that way. That fire comes from within.”

Nearly winning the Stellar in 2014 only made Barton more determined. So he and Allen put hundreds of hours into the writing and presentation.

The writing was personal, but the process was more collaborative than ever. In multiple sessions—including some led by the College’s Democracy and Public Discourse Initiative students—Barton had listened to what citizens wanted and needed.

“The College was really engaged and a full partner in this process, and President Hess and I meet on a regular basis to talk about our projects, our vision, and how we can work together,” Barton recalls. As Indiana Lieutenant Governor Sue Ellsperman put it: “The other impressive piece of this [application] was the Wabash College connection. It wasn’t just having them on the sidelines, but integrating them into this plan. I think that put Crawfordsville over the top”

“Crawfordsville had not had a huge win for a long time, and we needed one,” Barton says.

And we got it!

See the album above for a glimpse at what some of the coming changes will look like and some outtakes from photographer Kim Johnson’s session with Barton. And listen now to Richard Paige’s interview of the mayor on Wabash On My Mind podcast. Read the complete story in the upcoming Wabash Magazine in February.