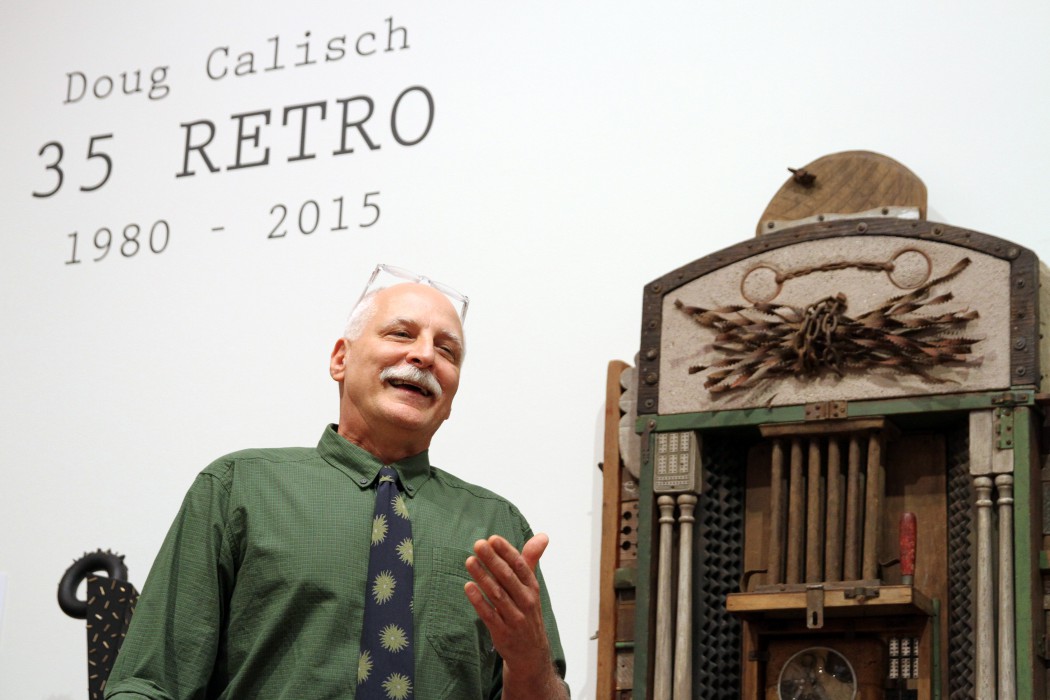 Calisch welcomes guests to the opening reception of 35 Retro. 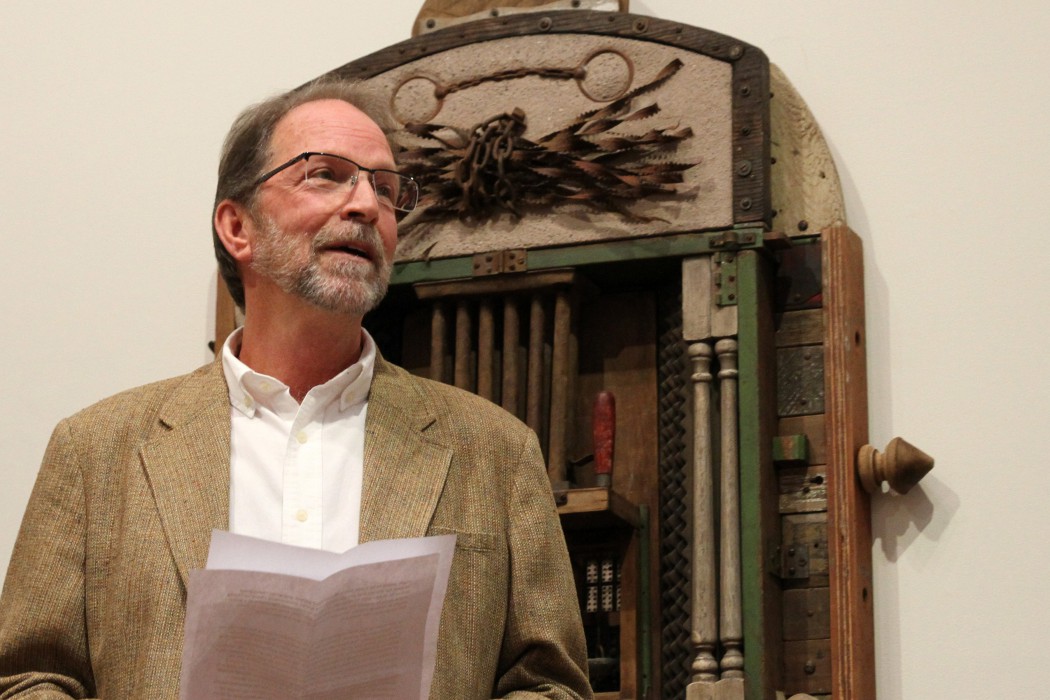 Professor of Theater Dwight Watson introduced his friend with admiration… 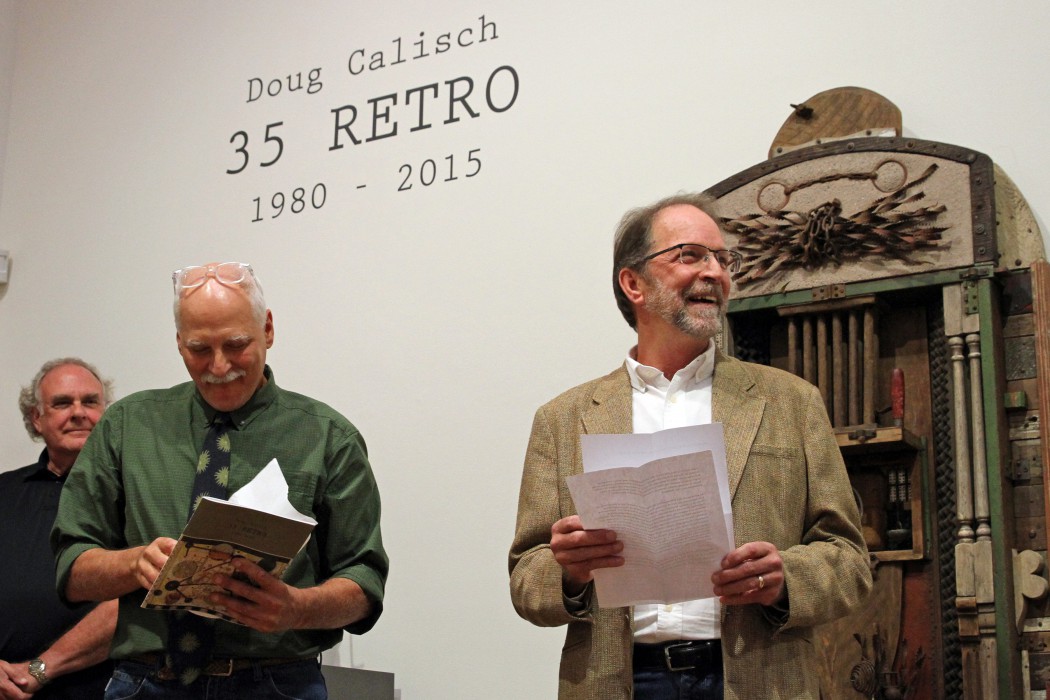 …and some lighter moments. 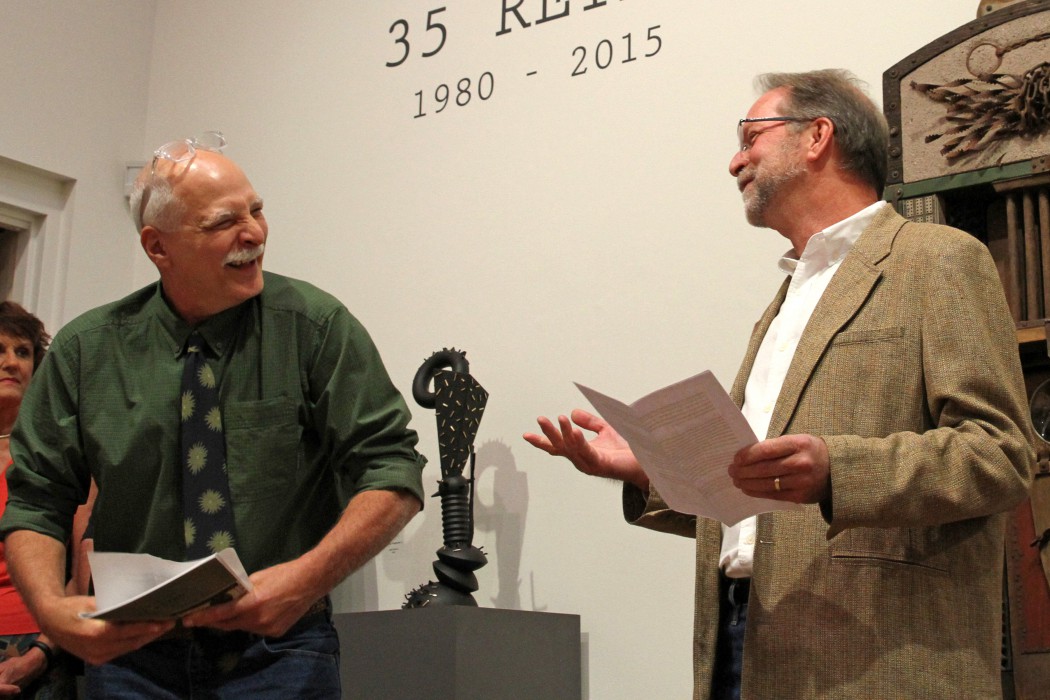 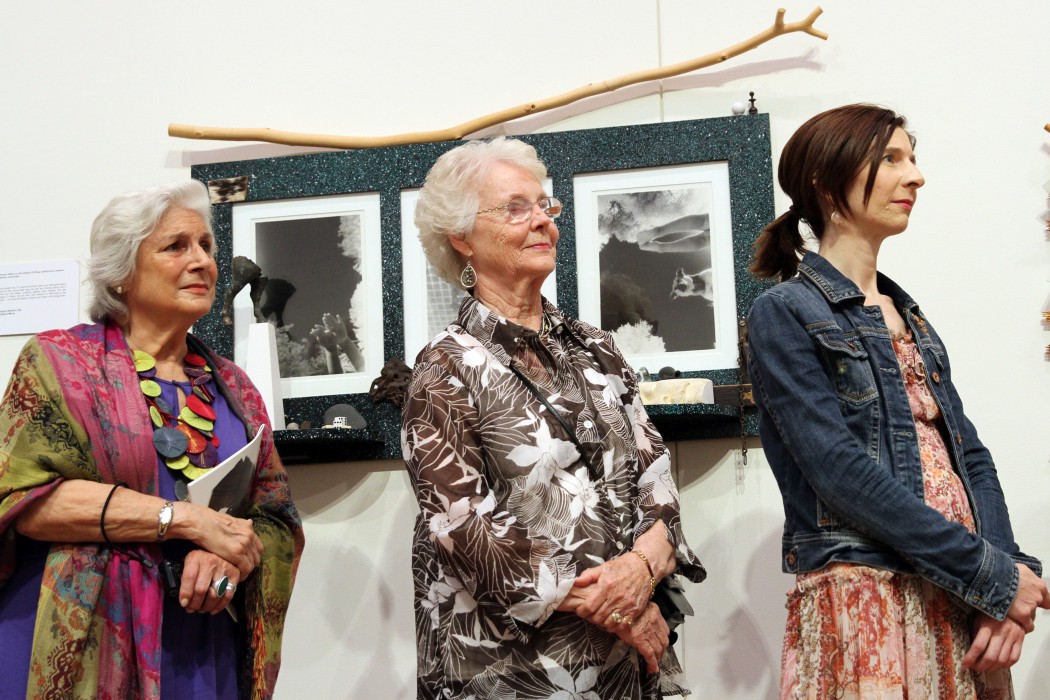 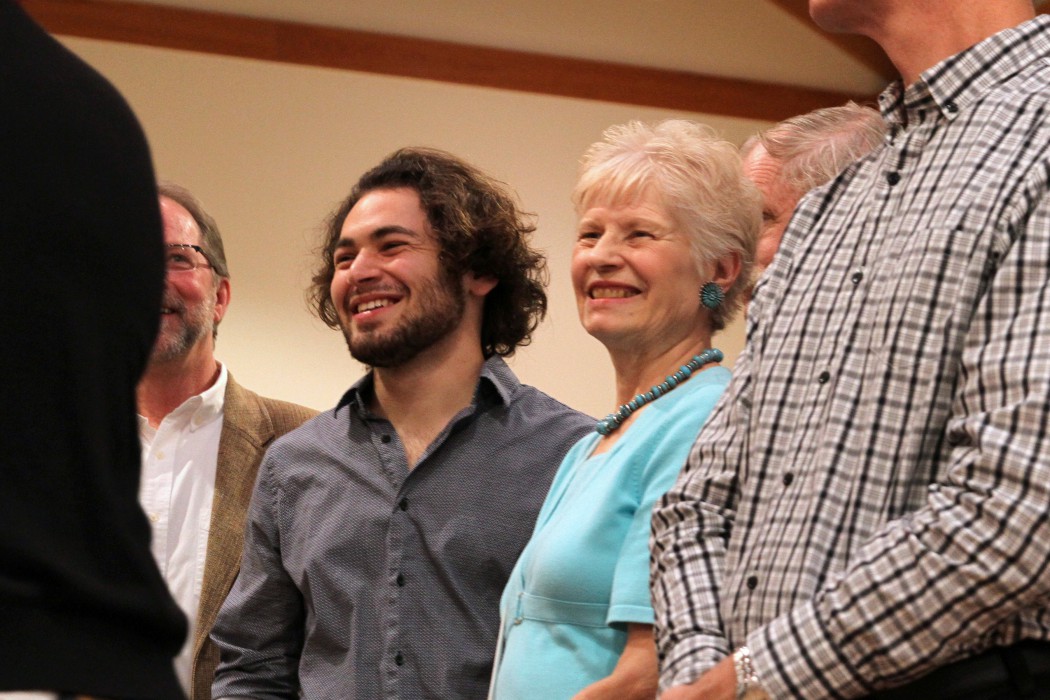 Abel Becker ’17 (center) worked with Calisch during the summer. 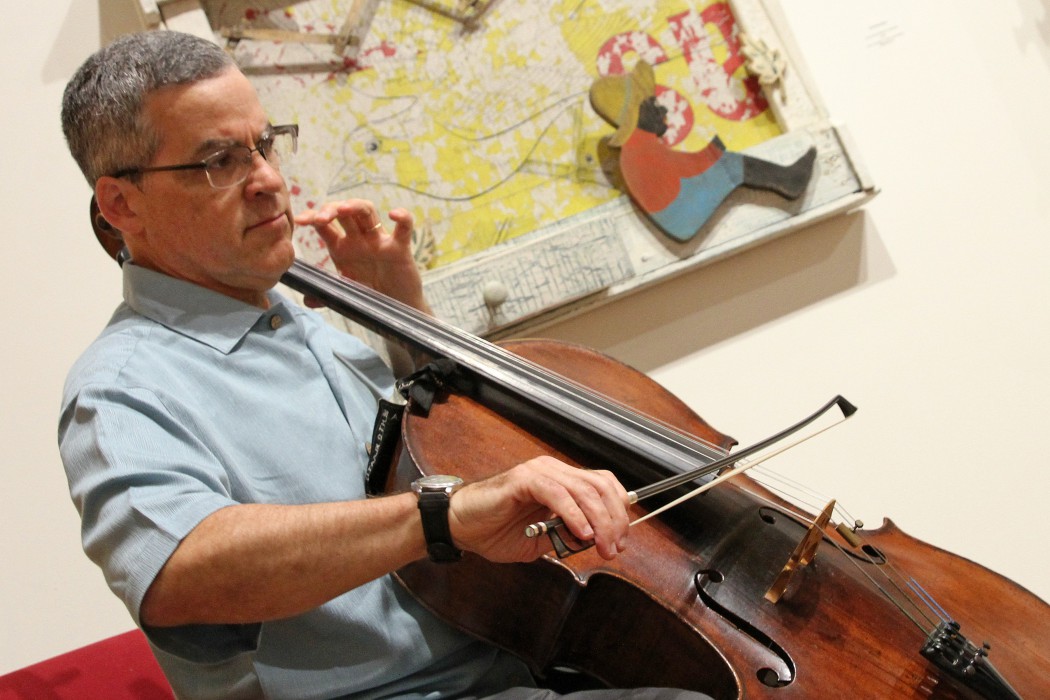 Calisch's childhood friend Lawrence Leviton provided music for the reception. Leviton is cello instructor at the University of Wisconsin-Stevens Point. 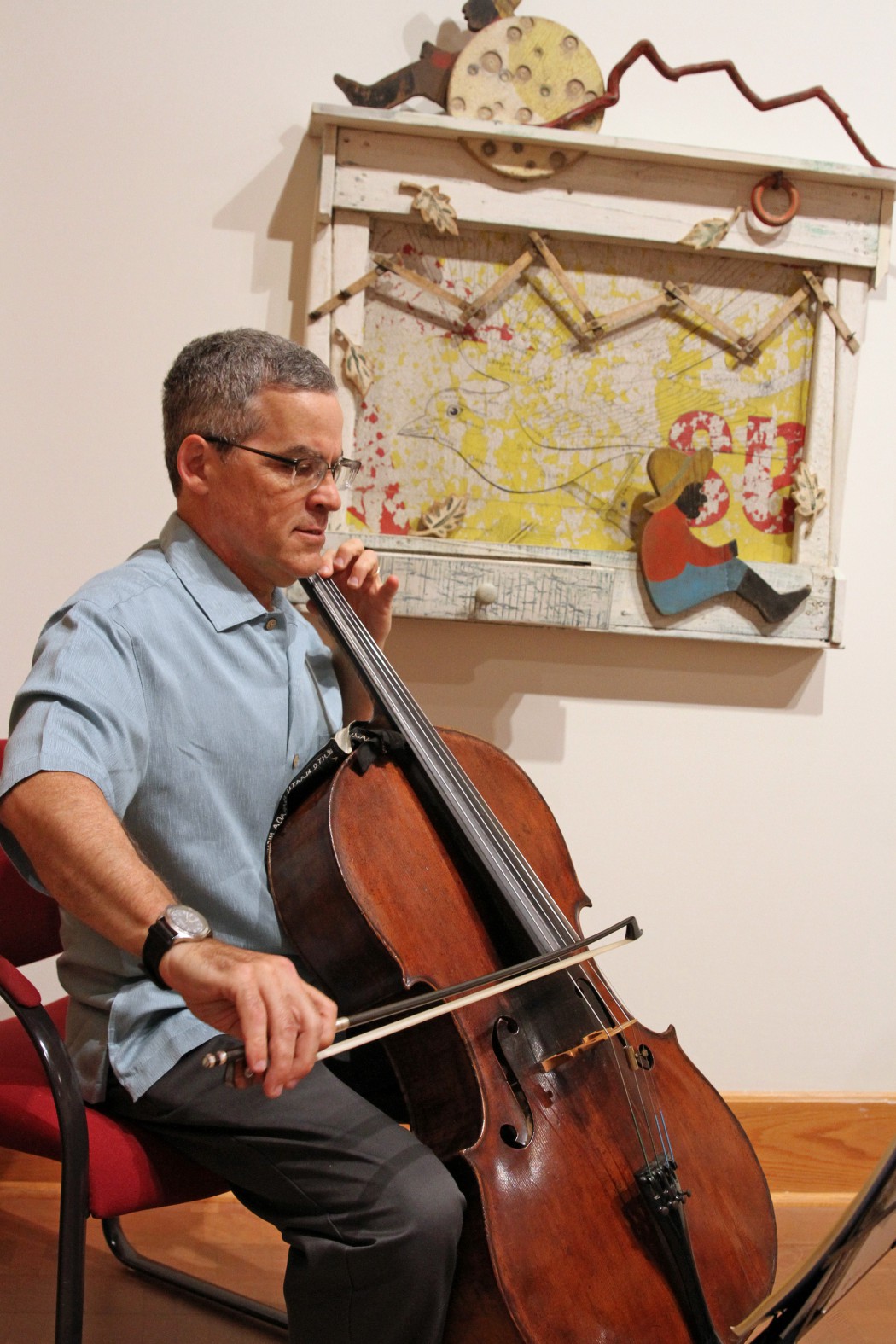 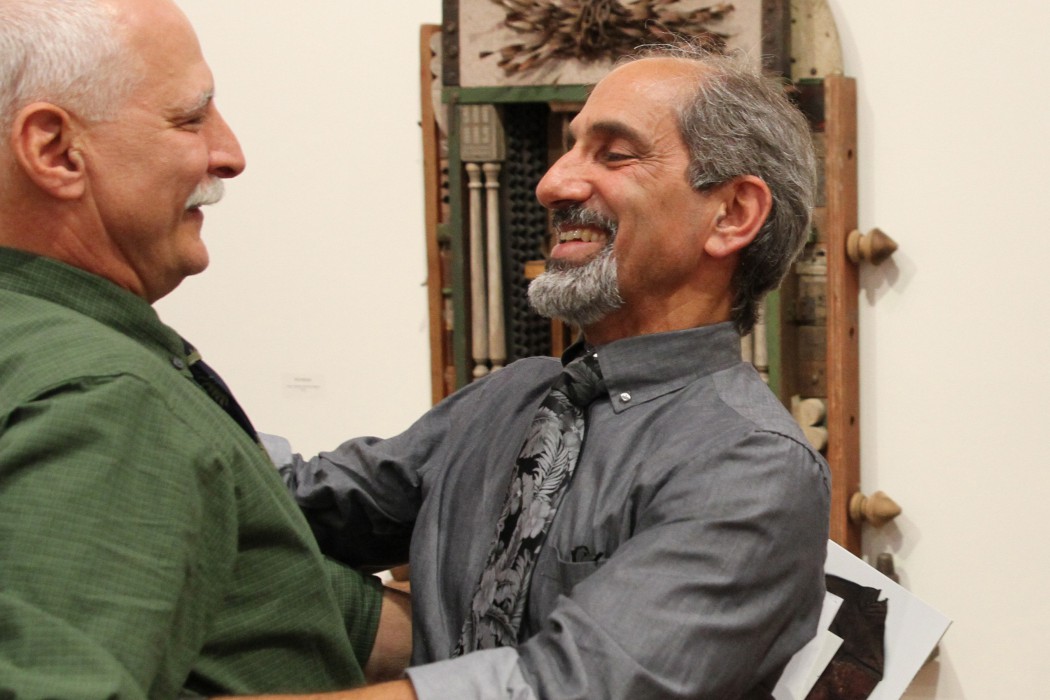 Childhood friend Ken Fein drove in from California for the reception. 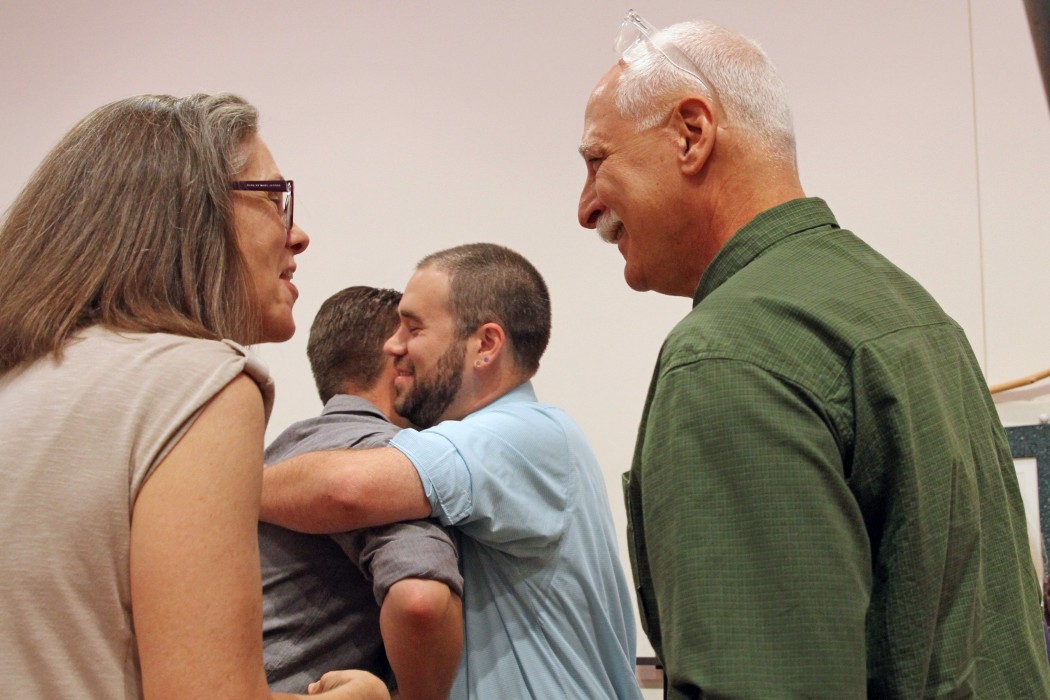 Nic Bitting and Shay Atkinson greet one another as Laura and Doug Calisch enjoy the reunion. 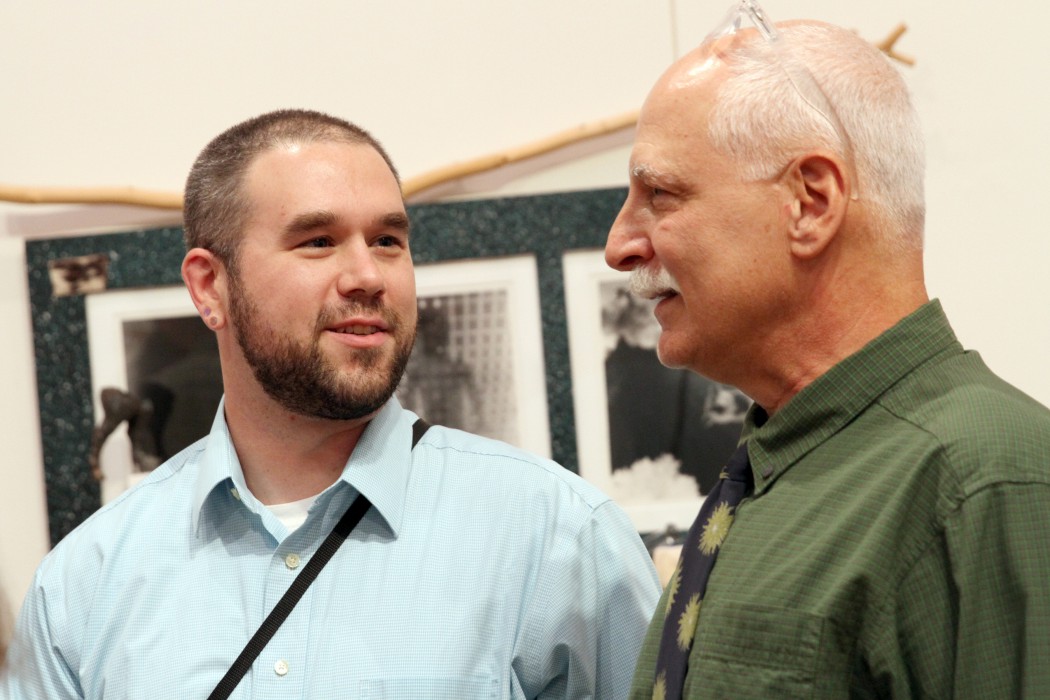 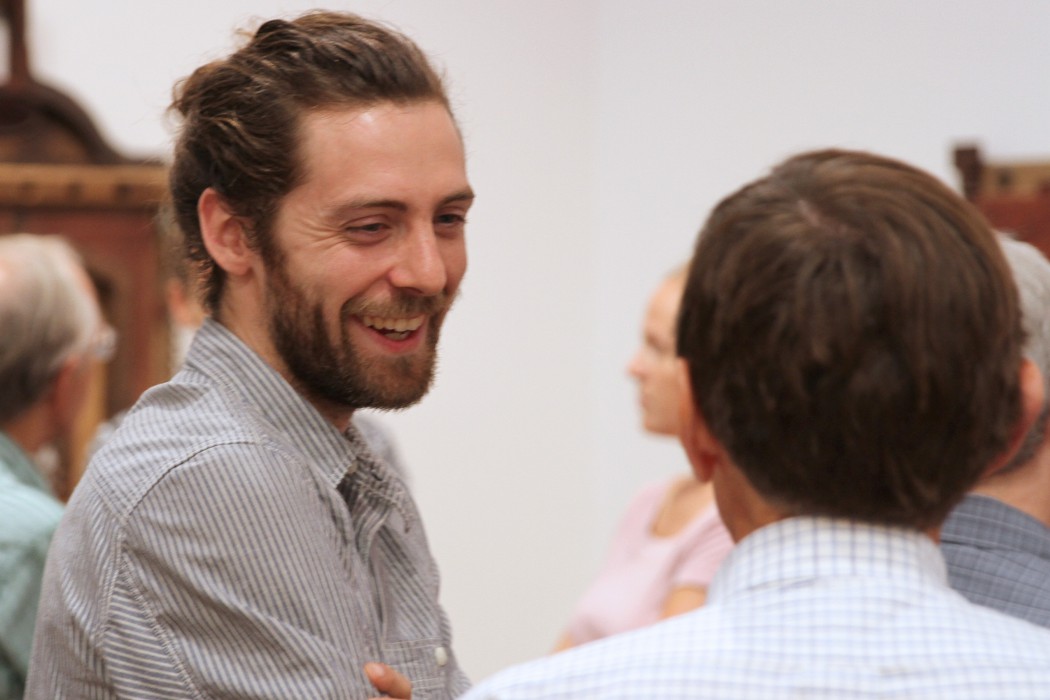 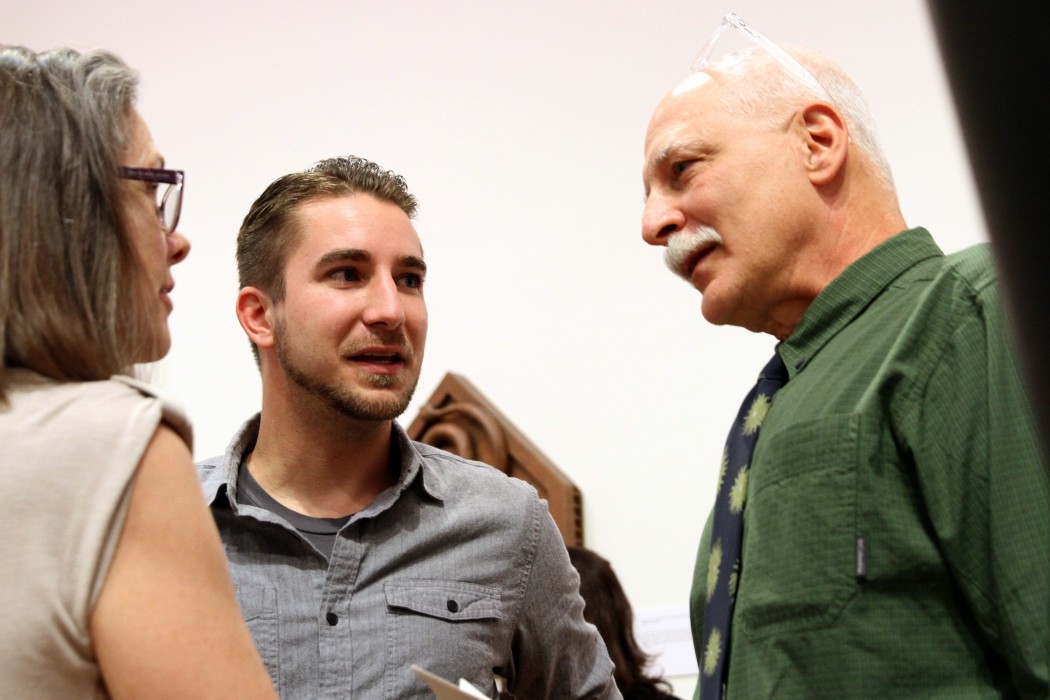 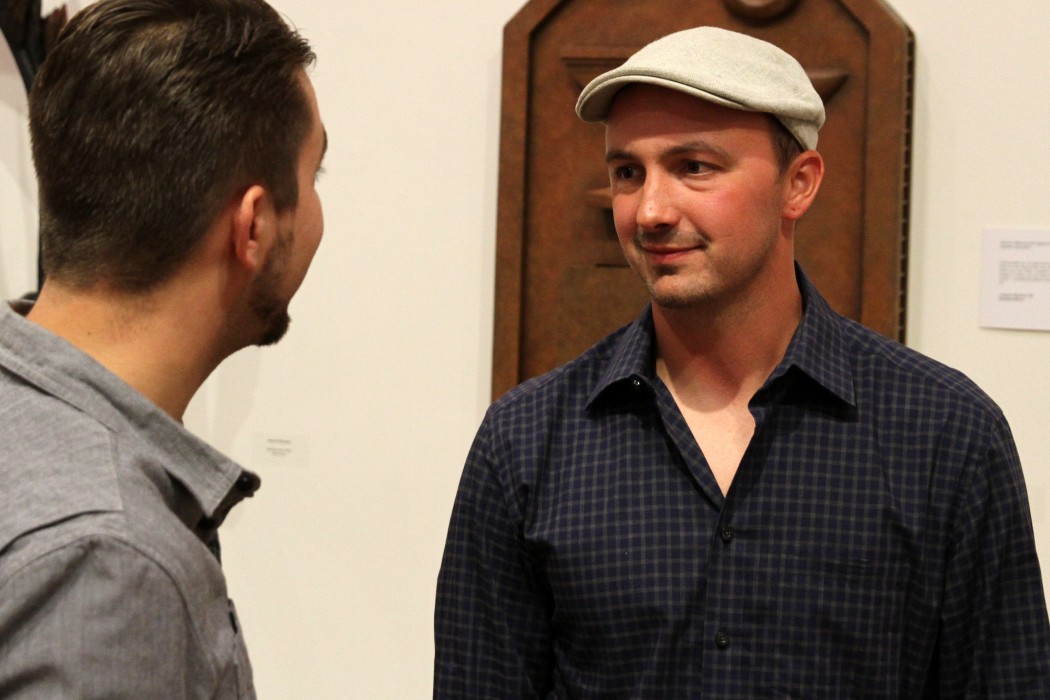 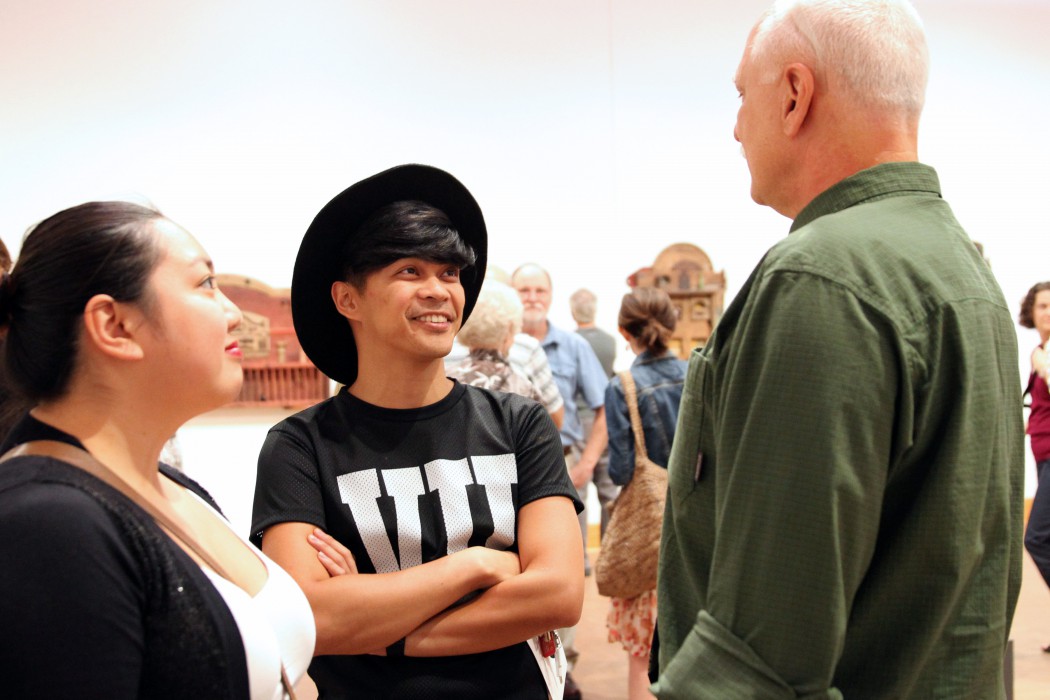 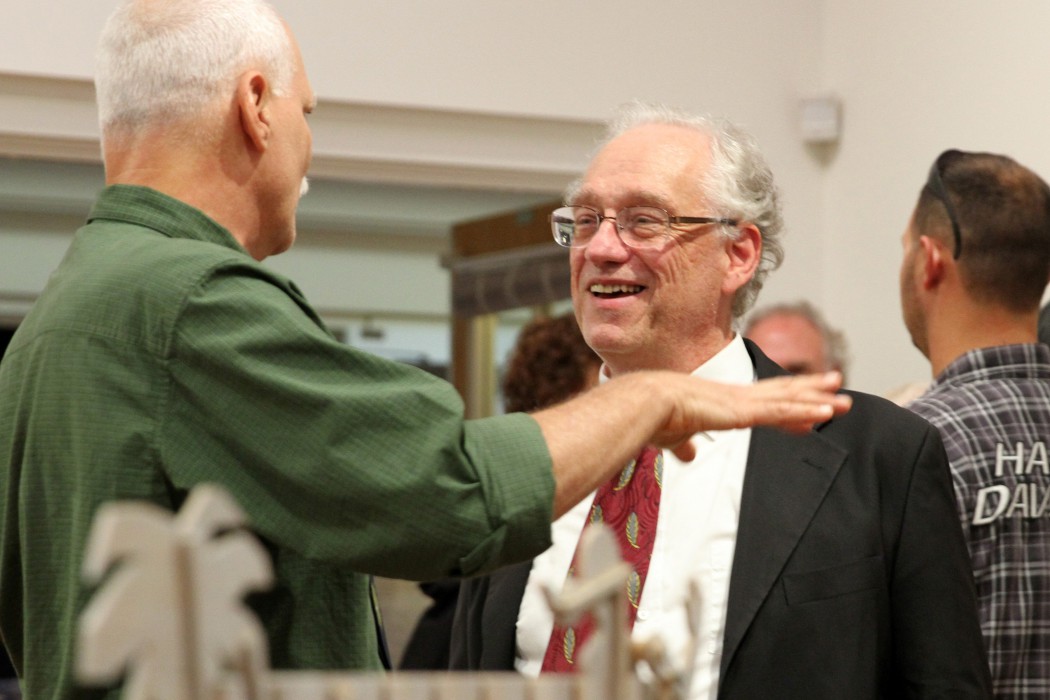 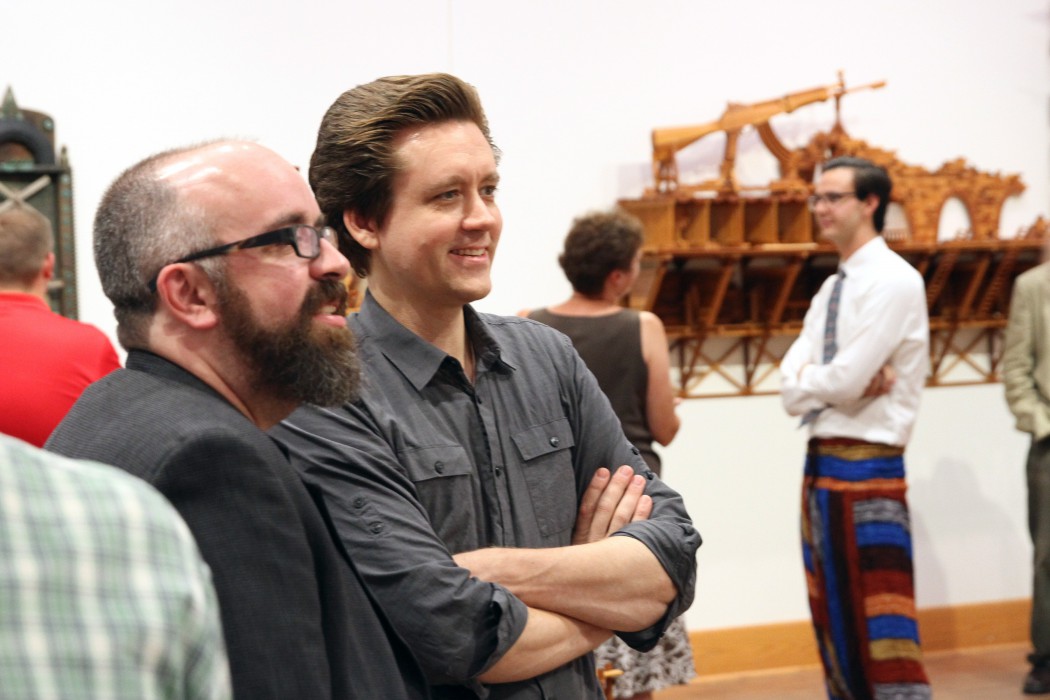 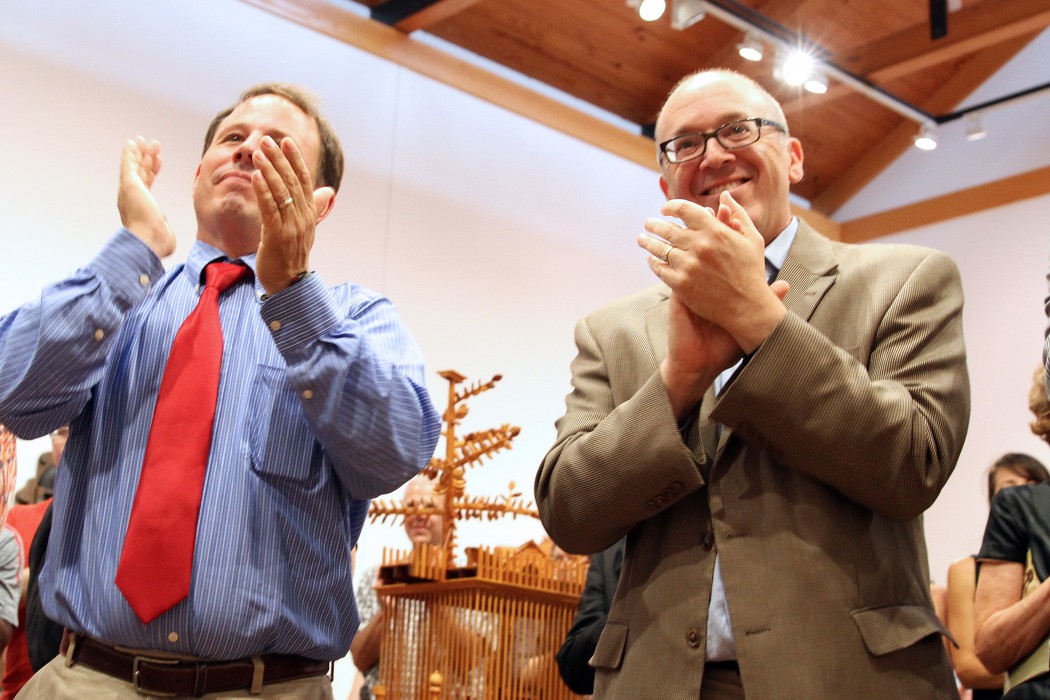 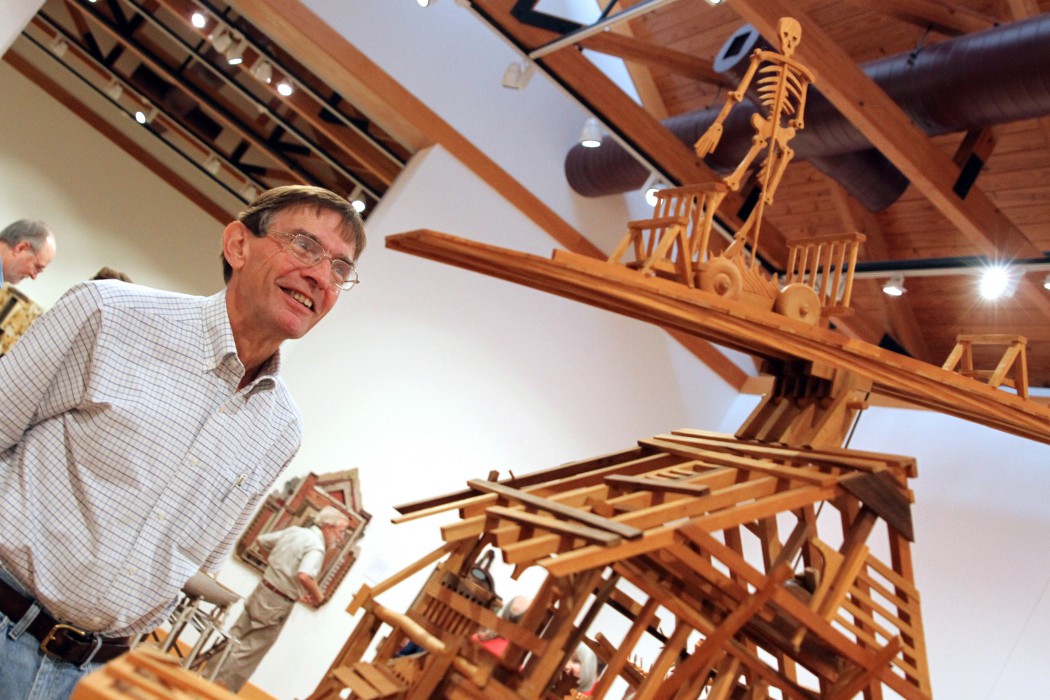 Professor Emeritus David Maharry checks out "Roughhousing with the Sorcerer." 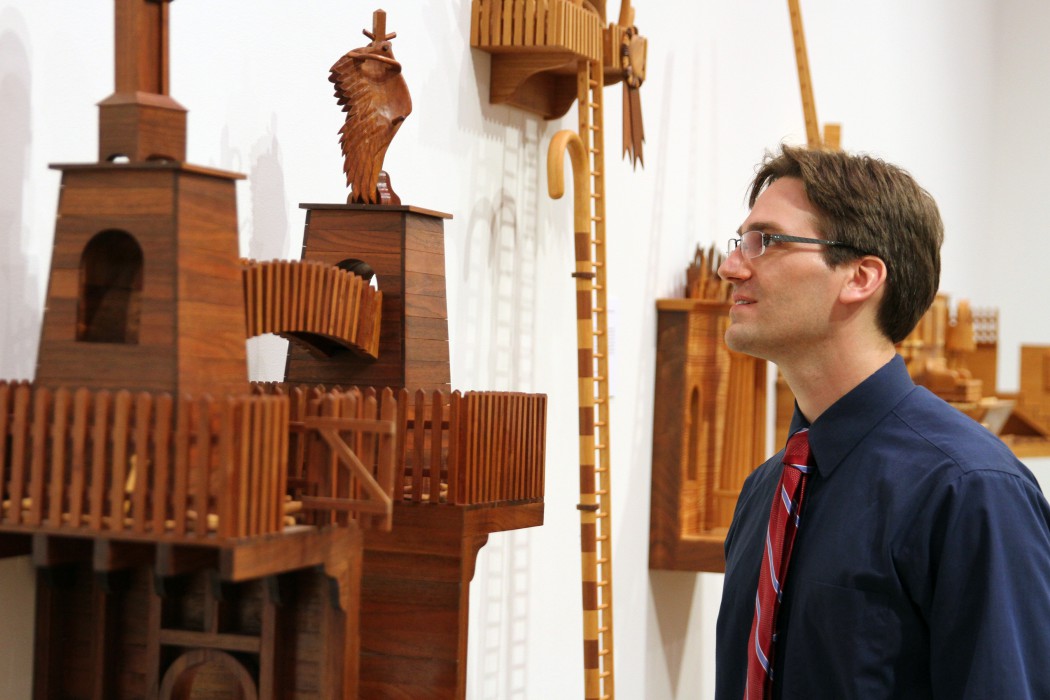 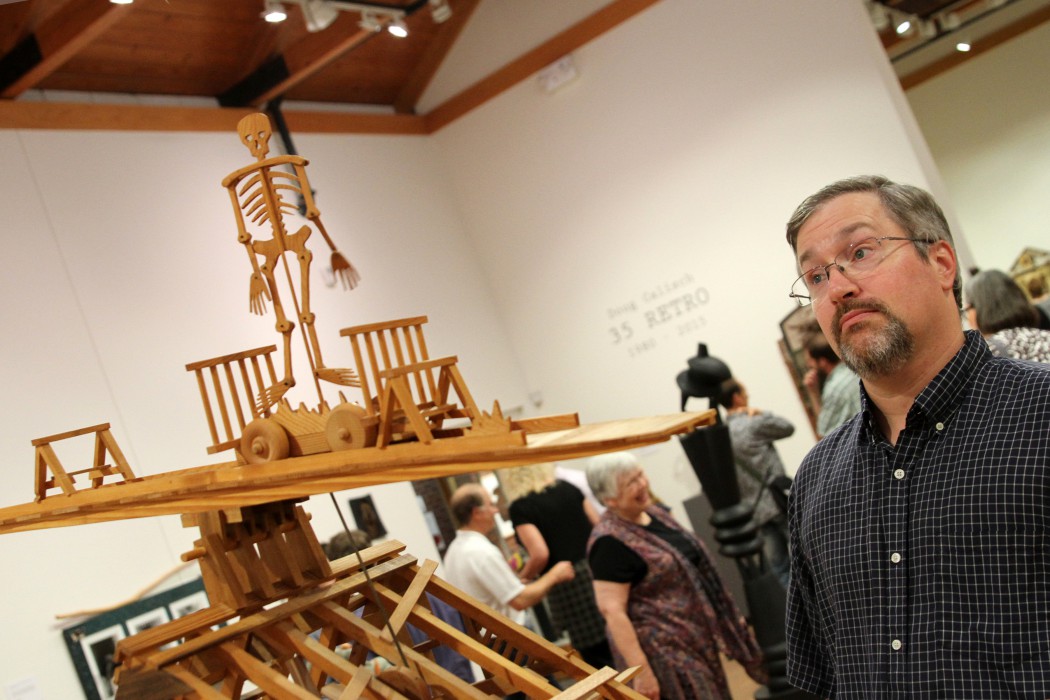 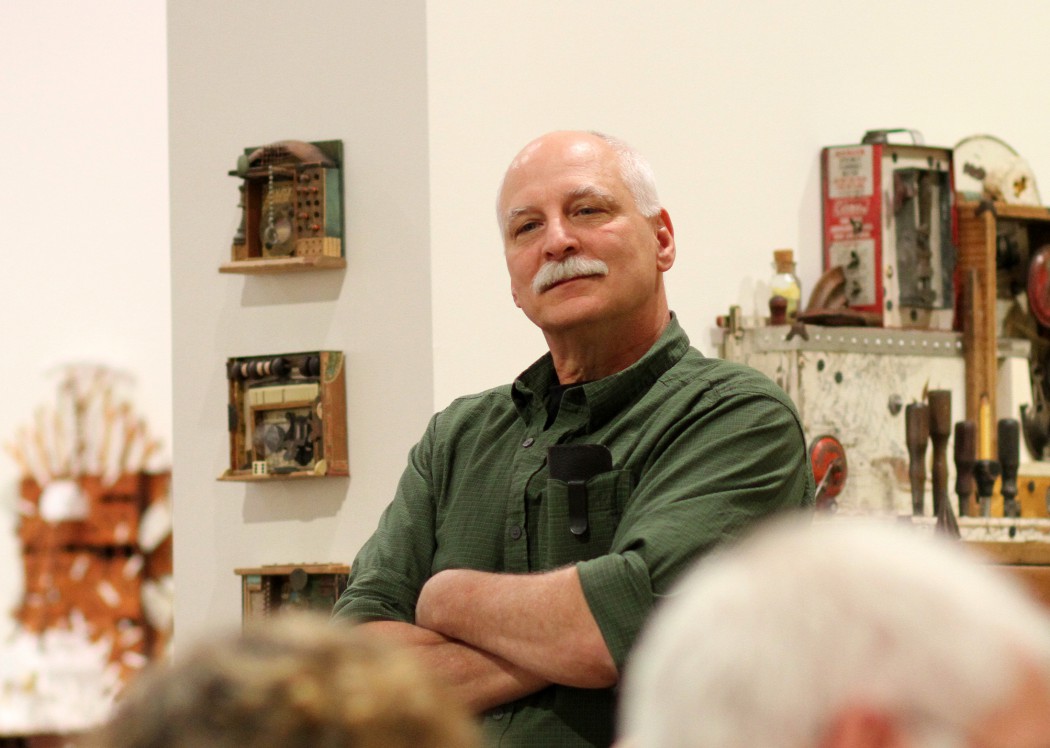 Calisch listens to a question. 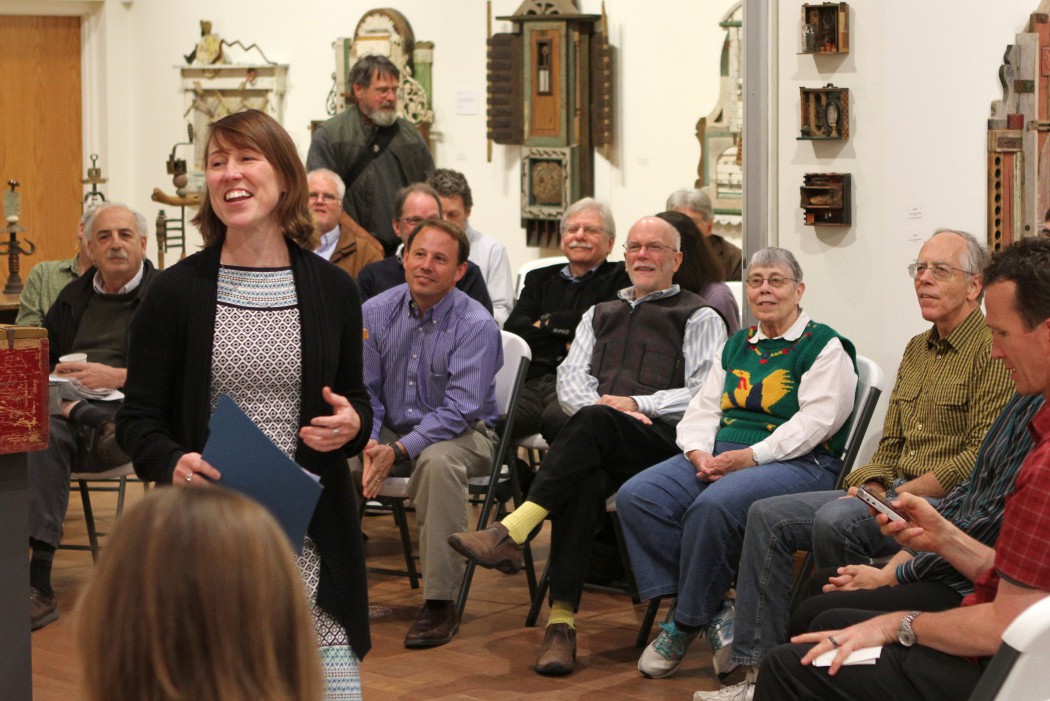 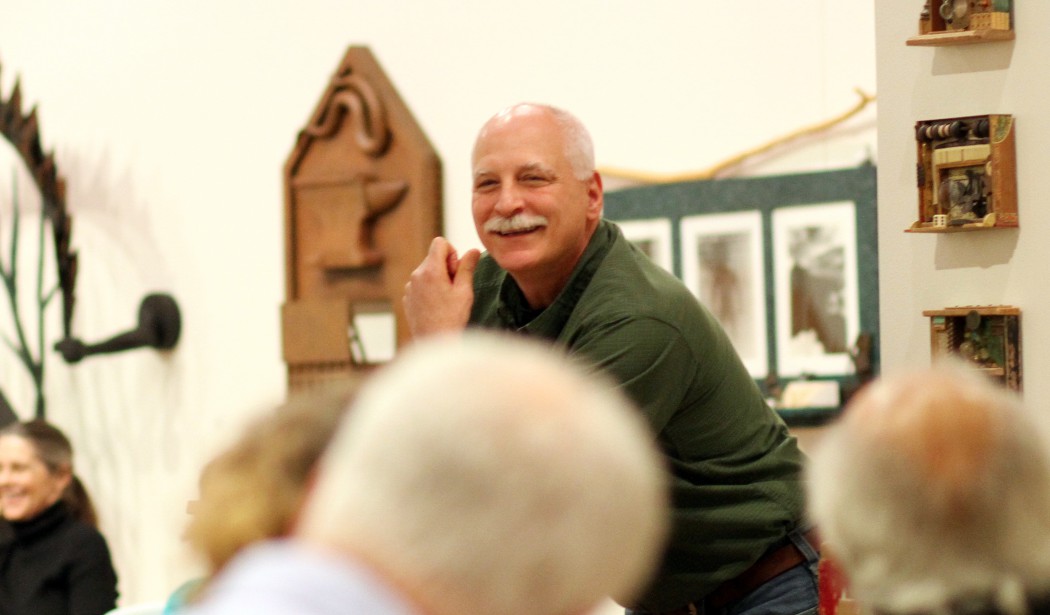 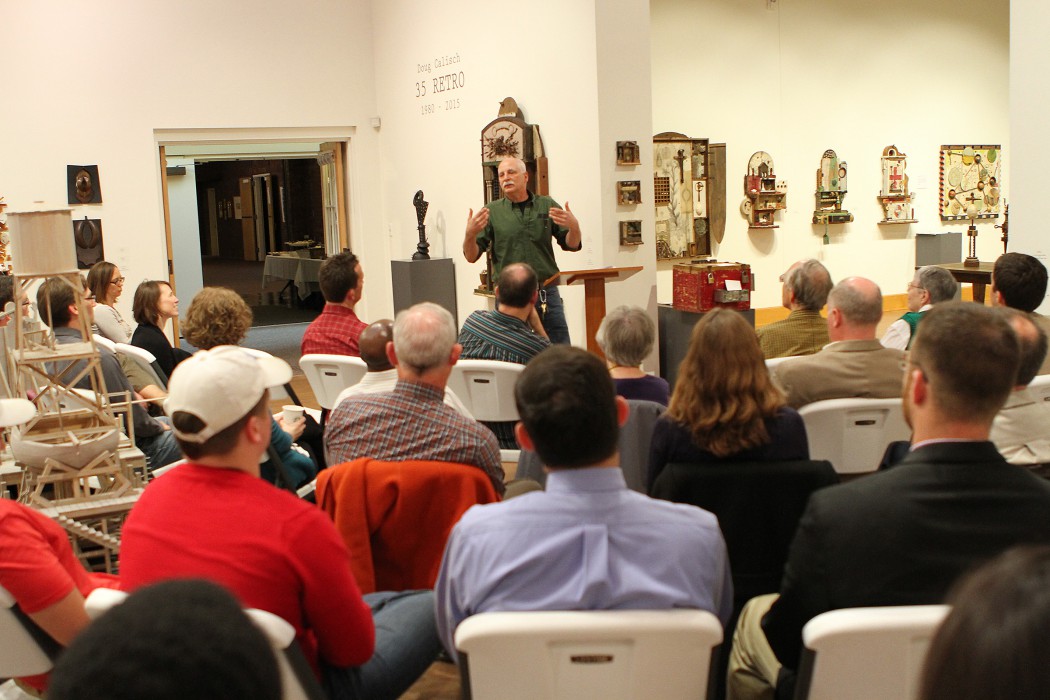 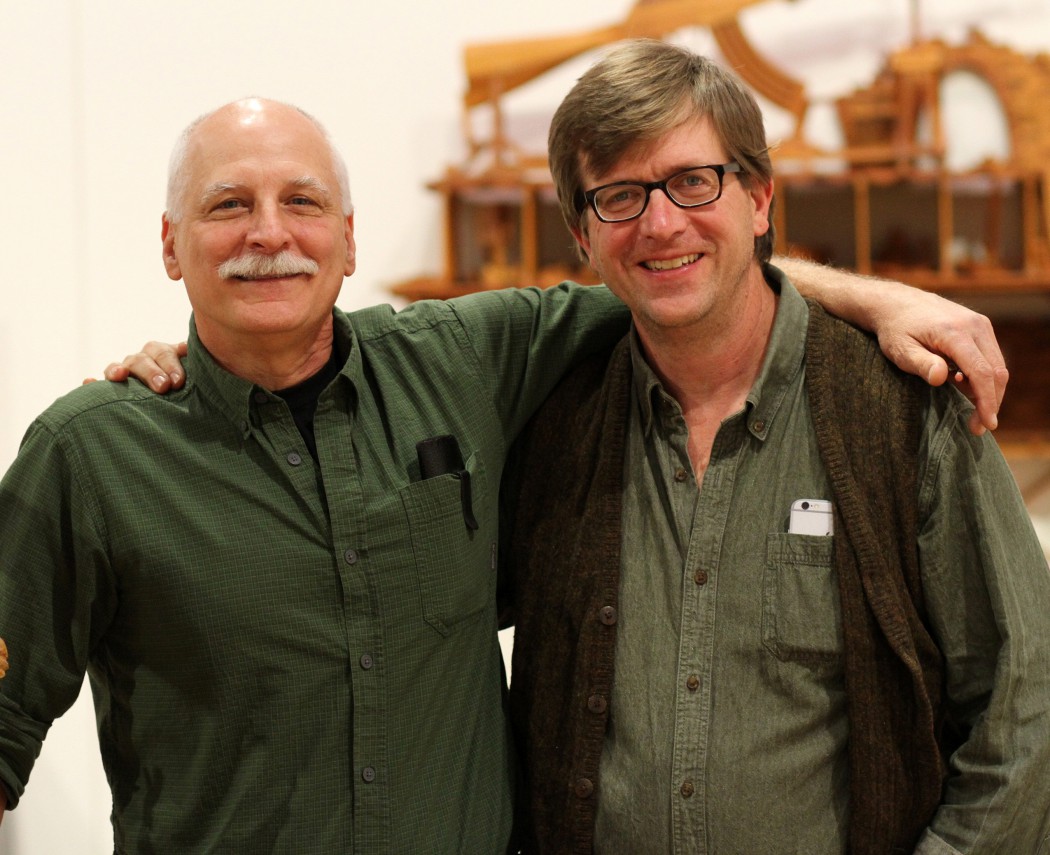 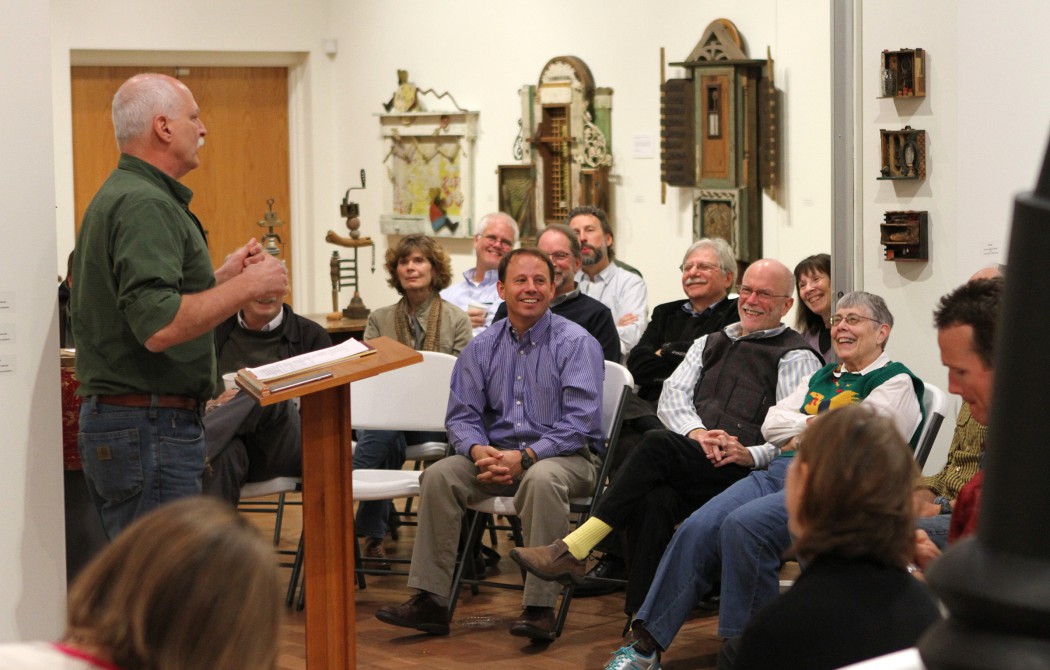 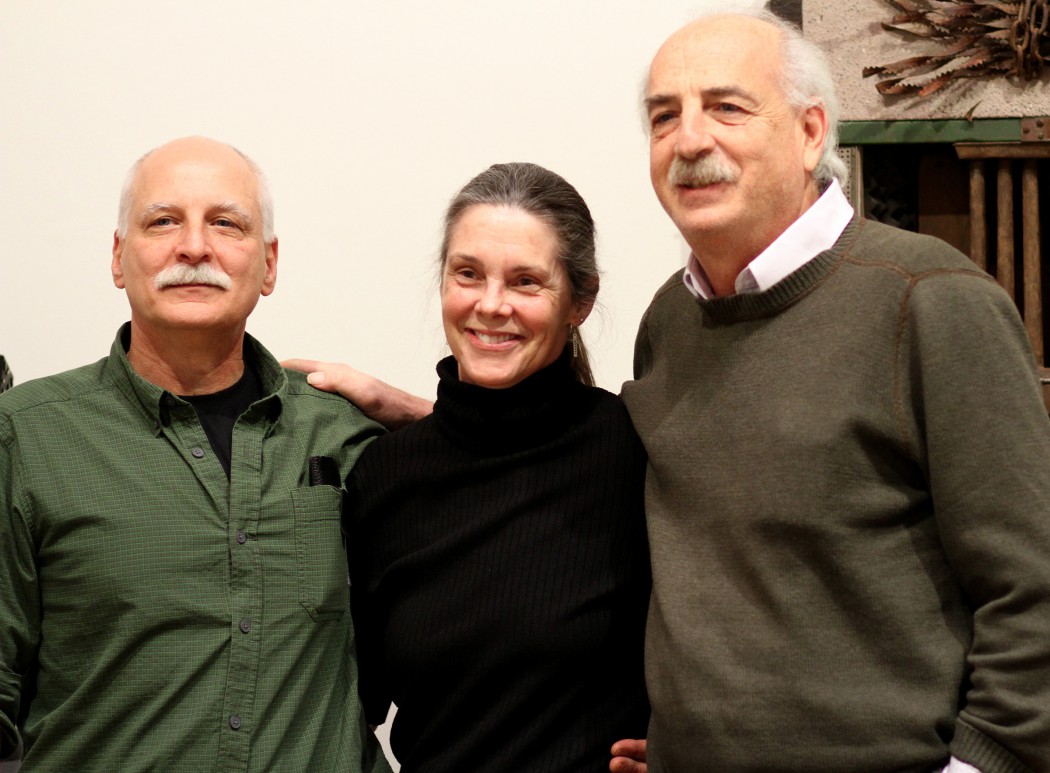 The artist’s boyhood best friends drove in from California and Wisconsin.

Former students came from as far as Washington State and as close by as Marion, IN.

His mother was there, and his sons Nolan and Sam, along with his wife, Laura, who helped design the show.

Then there were the 100-plus admirers and friends and Wabash faculty, staff, and current students who attended not only the opening night, but also the November colloquium talk of 35 Retro, Wabash Professor of Art Doug Calisch’s exhibit in the Eric Dean Gallery covering more than three decades of sculpture and photography.

So a show in which “home” and the search for connection were repeating themes became both a housewarming in which the people themselves were the gifts and a series of lessons—not only on how to create art and teach, but also how to live an artful life.

35 Retro ended its fall run in early December, but the impact of that art, teaching, and life is really just beginning. Calisch will retire this spring after 36 years at Wabash, and that transition stirred reflection in his friends and former students.

Joe Trumpey ’88 is both. He captured the impact and temperament of the artist/teacher when he wrote to Associate Director of Communications Richard Paige not long after the opening reception:

“Doug Calisch was just the mentor I needed to launch my creative life. He is a calm, patient, and caring man. It was that demeanor that swayed me into a dual major. As a freshman I was a biology major thinking about an art minor. Getting to know Doug in 3-D design as a freshman, I realized that ‘making stuff’ was an important part of who I am. I saw that creative quality in Doug and his work. He gently encouraged me to complete a dual major. He was not high pressure. Just an idea. Just there. Listening to me. Paying attention to me. Talking with me. Caring for me. Holding me accountable. Challenging me.

“How could I refuse? I valued those qualities then and still today. I learned a lot about being an educator from Doug and still strive to be the calm, attentive mentor that he was to me and countless others.”

Now an associate professor of art at the University of Michigan, Trumpey tells a story that gets at Calisch’s long-term influence on his students’ lives.

“I was the student representative on Doug’s tenure review committee. Once he successfully achieved the tenure he deserved, he went on sabbatical and began building the home he designed. I spent a good part of that summer working in a bio lab on a research project during the day and spent nights and weekends helping Doug and Laura build their home. Twenty-three years later, after I achieved tenure at the University of Michigan, I began building my own home. Doug and Laura’s son, Sam, contacted me interested in green building. Sam came to Michigan and lived with us for more than a month working hard in building our home. It was a fulfilling and beautiful thing.”

Of course, not every one of Calisch’s students went on to build a house. But reflections from many of them were part of the show, placed on the wall between photographs, their thoughts and ways of seeing as meaningful to Calisch as any work of art he ever created.

“Doug made the studio a place to explore,” writes professional set and lighting designer Marcus Doshi ’97. “He created a culture of investigation by challenging preconceived notions about what is and what is not art.”

“His ability to guide through simple ‘nudges’ allowed me to find my own creativity,” writes landscape designer John Herron ’98.

“I was a first generation college kid trying to figure out life, love, and everything in between,” writes Bobby Riggles ’94. “Doug and his family helped me realize I was not a misfit in the Wabash community and gave me a glimpse of what it means to live life well and lean in to your gifts and passions.”

“With you in the room I felt like I could breathe—as if I had found a home at this strange little college,” art professor Rafael Chacon ’85 wrote to Calisch. “You showed us how to love and respect those around us and still be men of integrity.”

That was the power of 35 Retro‘s opening reception: So much of one man’s artistic vision, effort, and life—the people Calisch loves mingling with decades of the work he created—packed into a single gallery. We’ll never see a homecoming quite like it again.

Listen to Calisch at the Wabash On My Mind podcast.