Howard W. Hewitt – Jim Davlin ’85 told a large group of Wabash students Friday that pricing any consumer product has many variables, some obvious and some less so. 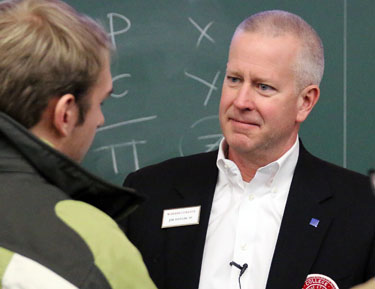 Davlin ’85 talking with students after his lecture.

Even though he is at a corporate level now, he has had “a lot of line development for products.” He used the example of dish soap or laundry detergent to start his talk. The components of cost, competition, are relatively simple, he suggested, but packaging can also have a huge impact with consumer goods.

While at Lilly, he learned pricing of drugs is very different. “The insurance market clouds the cost of health care,” he said. “The raw materials cost very little to make one pill. What’s expensive is all the cost that went into the drug (research) to make it successful. One in 10,000 compounds will be a successful drug.”

The market is fickle. Drugs can greatly aid one healthcare affliction while causing other patients side effects. The customer, Davlin said, must weigh price against result in unique ways no at all like buying dish soap. 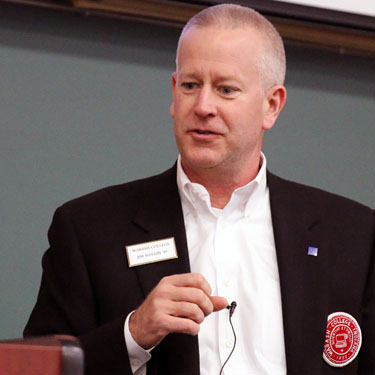 Davlin’s time at John Deere gave him a new-found respect for agriculture. “Farmers are dramatically underestimated for their financial savvy,” he said. He explained farmers will weigh the benefit and gain of buying new equipment, its impact on harvest, prices, and labor in determining what they will pay for a new tractor.

He jokingly noted that most of the young men probably wanted to hear more about selling Cadillacs than tractors so he used Cadillac’s 2013 introduction of its new ATS as an example. He explained how the company tried to position the vehicle in comparison to a similar BMW.

But the other factor for pricing in the auto industry isn’t just market demand, raw materials cost, and the other components.   Auto manufacturers also must consider how a vehicle price-wise fits in its own lineup.

Students peppered the GM executive with questions for the remainder of the hour. He talked about targeted advertising, GM’s downsizing, and the company’s substantial financial turnaround since 2008.