As alumni made their way on campus for Big Bash many stopped to gaze at the Bell they once fought for as students. Tom Verachtert, a former football player and Chemistry major from the Class of 1963, recounted many of his Wabash memories: the traditions, his favorite clubs, most memorable moments, and more. For Verachtert, the sight of the Monon Bell was a bitter-sweet moment.

As we talked about Wabash’s current four-year reign over rival DePauw, he said the tables were once turned. Over his four years at Wabash, Verachtert never rung the Bell in victory – Wabash went 0 for 4 from 1960 to 1963. “At the end of the last Bell Game of my career,” Verachtert said, “I was moved to tears because I never won.”

We continued to talk about Wabash, about the once proud Little Giant debate team, hometowns, my plans after school, and such. We acknowledged the changes to the campus over the years, change in landscape, buildings and building names.

What doesn’t change at Wabash is the branded bitter-sweet memory of victories, defeats, and an undying love for the hallowed halls.

The Long Grove, Illinois native Verachtert offered a little advice as we wrapped up our conversation.  “Enjoy this school. This is a special place.”

Zach Canon ’16, Brookhaven, MS., is a summer intern in the College Communications and Marketing Office. 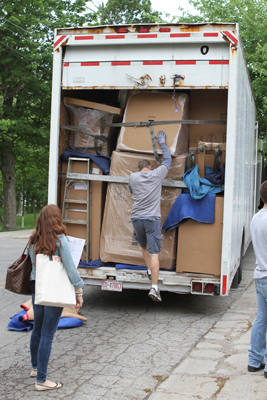 Just in time for Big Bash, many of the public areas of campus received a facelift that included fresh paint, new seating, display cases, and tables.

A generous donation from an alum brought east coast interior designer Sarah Kennedy Dolce from shea dolce interiors to campus earlier in the year and again last week to unload and set the semi-trailer full of new furniture.

Dolce collaborated largely with First-Lady Chris White to identify spaces on campus that could benefit from new décor. All of the furniture came from Chaddock, in Morgantown, North Carolina, one of the few American made furniture companies remaining.

To see photos of the furniture installation click here.

Jim Amidon — How nice it was last Thursday to attend a reception honoring a long-serving colleague at Wabash College and not have to say “goodbye” when it ended.

A huge swath of the Wabash community gathered to celebrate John Zimmerman and his 50 years of service to the College. 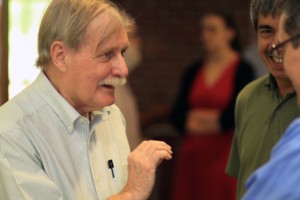 Dr. John Zimmerman has taught (and learned) at Wabash for 50 years. Photo by Steve Charles.

Hosted by the Chemistry Department, the event paid tribute to “Dr. Z” for a half-century of teaching, learning, and contributing to the life of the College. While specifically a chemist, Dr. Z’s influence can be felt all across Wabash — yes, from the labs of Hays Hall, sure, but also to the Glee Club, Theater, and sports teams.

You see, Dr. Z is almost never without his camera — or at least that’s been the case for the 30 years I’ve known him. He’s made it his life’s work to chronicle and document (on slides, film, chip, card, tape, and disc) the most important events that happen at Wabash.

I had very little time to spend at Thursday’s reception, but I wanted to thank Dr. Z for what he’s meant to me — and give him a hug and handshake to congratulate him on his career. He and I have “covered” a thousand Wabash events and more. The difference is that I get paid specifically to do that; Dr. Z does it because he loves the students, faculty, and staff of Wabash College.

He said to me Thursday, “If I had to give a talk about photography I might start it with, ‘There was a time when Jim Amidon and I were the only ones on campus who had decent cameras.’”

He was right, too. And time changes everything.

Some of my fondest memories of my years as the sports information director in the late 1980s and early 1990s are of early morning cross country races — standing next to Dr. Z as we snapped scores of photos. The same was true during football, basketball, and track seasons — if there was a sporting event happening at Wabash, Dr. Z was there to capture it.

Typically, he’d drop by my office a couple days after an event when his prints had arrived from Target to show me his “wow” photos. (Though you really know when Dr. Z likes one of his images because he always says, “Stunning!”)

For about three decades, he’s been the official photographer and videographer of the Glee Club and Theater Department. He’s traveled the world to capture the history of the Glee Club with images and video from the Sydney Opera House to the old castles in Scotland — and all points between. 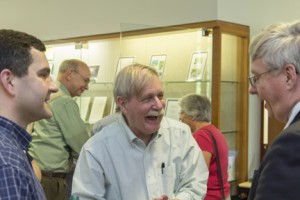 Last Thursday lots of memories came back to me as I gazed into the display cases in Hays Hall, where many of Dr. Z’s images and mementos were spread out. To show how this scientist has evolved and adapted to technological change, there was a slide dated 1959 that he had reproduced digitally (this week) using a scanner and desktop printer. Back in 1959, you sent film to a lab and you might get it back a week later! And if you used Kodachrome, you needed a slide projector to see the images!

Right next to that image was a large-format digital disc — the size of an old vinyl record album — made in 1995. Dr. Z and some chemists at the University of Wisconsin recorded lab demonstrations and “burned” them to the large videodisc — it was literally the beginning of “distance education” because that disc could go anywhere to provide virtual instruction.

Dr. Z has spent his entire life learning (though his title is professor). We chatted last week about the summer he spent in Greece to photograph Professor Leslie Day’s archeological dig in Crete.

We laughed as we recalled the afternoons we spent in my office darkroom prior to his departure, when I taught Dr. Z how to develop film and make prints — all of which he recorded on a video camera (in near-darkness). Weeks later, he created a makeshift darkroom in Crete and repeated the whole process so the archeologists would have a record of their finds.

There was fondness in his voice as we talked about the funny darkroom scene. It was then that it occurred to me that I had – in my 20s – served as a teacher to a man I have always regarded as one of the College’s finest-ever teachers.

As I left the reception, I overheard Dr. Z and others recounting old chem lab shenanigans and interesting characters — professors and students alike. And it was with a bounce in my step that I walked to my next meeting knowing that I didn’t have to say goodbye to this Wabash icon. He’ll begin his 51st year of service to Wabash standing beside me this Sunday as together we photograph the 175th Commencement Ceremony on the College Mall.

And be sure of one thing: Dr. Z’s images will be stunning!