The event co-sponsored by the College Republicans and Democrats as well as the Political Science and Rhetoric Departments, provided students with a unique opportunity to view the address while having a little fun. 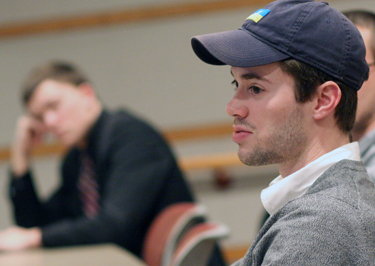 “I think it’s a great experience,” Derek Andre ’16 said. “I would feel pretty silly if I was clapping while watching sitting in my dorm room by myself, but it’s just good to be able to come and be with your buddies and those who both agree with you and disagree with you on this sort of thing. It was just neat to be able to watch it together to get at each other and also figure out why people think like they do.”

The flash discussion featured two screens for those in attendance. One featured the President’s address, and the other featured a constantly refreshing Twitter feed started by the sponsors with the hashtag #WabashFD.

The Twitter feed was a unique twist to the discussion which had never been used before at such an event. “The great thing obviously by going through Twitter we had some alumni comments,” BKT Assistant Professor of Rhetoric Sara Drury said. “They weren’t here with us, but they were able to be part of the conversation happening on campus which is cool.”

Many of the students in attendance enjoyed the ability to communicate with the world via Twitter as well. “I liked the fact that we had the tweets going at the same time because you had people giving their concerns like ‘well the President really addressed this’ or maybe he addressed foreign policy a little bit more than people thought,” Fabian House ’16 said. “I wasn’t surprised by any means by the speech itself, but I did appreciate the interaction of the people to give me a little bit more information.” 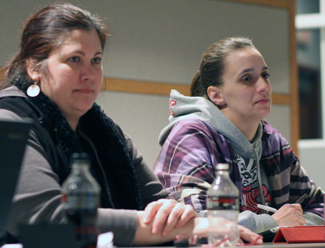 Individual political science and rhetoric classes have had flash discussions before, but this was the first time that such an event was College-wide. “I think that there is something to be said for bringing people together to watch and respond to the issues of the day,” Drury said. “I think that event of bringing people together and watching it together and having conversation as it’s happening and afterwards is the beginning. I am confident that those conversations then continue beyond the event. I think that is really the benefit of having it as a central event on campus. That’s part of the reason that those of us in the Political Science and Rhetoric Departments wanted to team up and meet to keep doing these flash discussions for relevant contemporary political events, because it brings people together to talk about the things that are happening in the world around them.”

Overall, the atmosphere of the event was fairly lively. Pounding of desks for approval and hisses of disapproval were common with a bit of occasional laughter at the Twitter feed. See more student reaction below:

“The reason why I came is not only just to watch it in a group of people while live tweeting it, but also the discussion afterwards. It gives you a deeper understanding and more perspectives on the different issues and everything that he was talking about in his speech.” – Carter Adams ’15

“I could have just as easily sat in my room and watched it, but being able to have the environment is a good idea. The State of the Union is a give and take I suppose. It’s not going to be exactly what you want to hear, but it’s also not going to be a total insult. It’s been better than in some years. He seemed to have toned it down a little bit on who he was trying to make upset. There are some things that can be worked on, but there are other things that pretty much are dead on the water. Time will tell.” – Nick Freeman ’15

“The people who stay behind are able to get a lot of insight on what other students have to say especially with the conversation we have. It really allows for a lot of bipartisan consideration and deeper discussion of the issues. There weren’t a whole lot of surprises. Like Dr. Drury said, you can lay a lot of these State of the Union speeches on top of each other and they would make up pretty well. With that being said, there were a couple of surprises that are pretty significant. There were a lot of omissions in certain areas that are highly contentious including the ACA and work force and unemployment rates that misled some Americans, and he didn’t do a great job of providing some of the proper statistics and information that he should have.” –Nate Manning ’14