Brent Harris – Wabash College students peeked behind the theater curtain Tuesday afternoon thanks to a visit from Donald Claxon ’06. 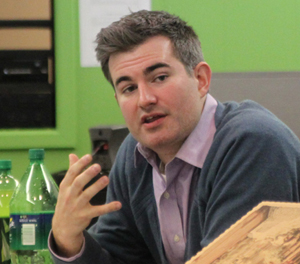 Claxon returned to his alma mater to discuss the duties and responsibilities off stage in both theater and opera productions. He also brought a wealth of experience and personal stories from his work in Chicago.

“When I was at Yale, some production managers were only known by the color and number of post-it notes on their desks,” Claxon said. “I enjoy being back stage and getting to know the actors. My job is to assist them in any way possible so they can focus on their role. 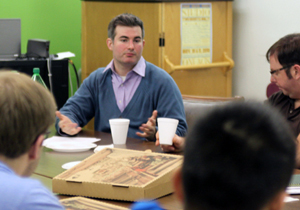 “Part of an actor’s job is to be perceptive. They know if you are assisting them. I worked with an actress who was diabetic. She wore an insulin pump during rehearsals, but it would have been impossible for her to wear it in performances due to her movements on stage and her costume. I asked her if it would be helpful to have some glucose tablets on both sides of the stage just in case she needed them. She told me no one had ever asked her that, and she was grateful that I considered that option.”

Claxon, who worked as a production assistant with Nathan Lane and Bebe Neuwirth in “The Addams Family: A New Musical” in 2009, talked about the different challenges created by different types of shows.

“Working with the Grant Park Music Festival, we have a different performance every night. We have roughly 21 hours to change out the set and prepare everything for the next performance. In some theaters, you might have two different shows in the same day. You have to take all of those things in consideration when preparing the budget and planning the design and construction of the set. What might work perfectly for a show that will run over a series of days or weeks might not work at all for a traveling production.”