The first wave of “finishing touches” are being applied to the Mud Hollow Field projects as the new school year draws ever closer. 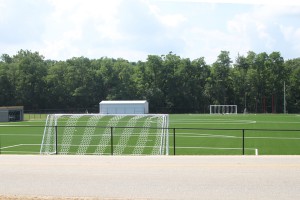 With the installation of the FieldTurf Duraspine Pro at the soccer stadium completed and sod filling most of the new practice and intramural/recreation space at Mud Hollow, the major focus of the project now turns to a long list of smaller items that will provide the final detail to the construction.

New goals and team benches were completed early this week and will be waiting for the arrival of the 2011 Wabash soccer team for early season practice in few weeks. Actually, the nets got some early work when senior players Ian Kelly and Mike Hegeman took some of their lunch break from summer campus jobs to kick around on the field on a warm Tuesday afternoon. You can view photos from their impromptu practice session along with some of the other project items here.

The new scoreboard will installed the first week of August, with handrails and fencing to go up around the facility during that time, as well. Everything is on schedule to be ready when the stadium gets its first real shakedown on Sunday, August 28 when the Little Giant soccer team scrimmages against St. Joseph’s College of Indiana at 5 p.m. The first official match at Mud Hollow Stadium will take place on Saturday, September 3 when Wabash plays Trine University at 2 p.m. in the opening match of the Second Annual Robbie Dreher Classic.