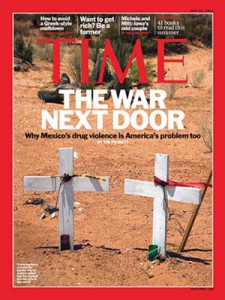 Steve Charles—For decades now, TIME Latin America Bureau Chief Tim Padgett ’84 has been American journalism’s voice crying out in the wilderness, warning us to pay attention to events in and the people of Latin America.

As the president of the Columbia University Graduate School of Journalism said in awarding him the Cabot Prize for his commitment to covering Latin America: “Tim has doggedly covered the region despite his own news organization’s reduction of space for Latin American coverage.”

So when I saw the cover story for the July 11 issue of TIME and read the headline—“The War Next Door”—I should have known there was only one person TIME would trust to get that story right.

Even the subhead—“Why Mexico’s Drug Violence is America’s Problem too”— sounded much like the title of a talk Tim might give to students and faculty at Wabash.

Introducing the story, TIME’s Managing Editor Richard Stengel writes, “As Tim Padgett’s powerful story makes clear, Mexico is approaching a danger zone. Tim, who has been covering the Mexican drug wars for more than two decades, finds the present moment a perilous but hopeful one. ‘While the drug-cartel brutality is the worst we’ve ever seen,’ he says, ‘the clamor for the rule of law among victims’ groups is the loudest we’ve ever heard.'”

For a man who has worked so hard to keep the people of Latin America in focus for an increasingly myopic U.S. audience, seeing the story on the cover was “a shot in the arm.”

“They wanted an essay that would put more of a human face on the drug war for a change, so it felt good to get these people’s stories out this way,” Tim responded after I wrote him to congratulate him on the piece.

I was reminded of the Cabot Prize committee’s praise not only for the stories he writes, but for the way he writes them: “The breadth of Padgett’s knowledge and the gracefulness of his prose make him a worthy model for new reporters and a reminder to editors that good coverage is based on deep commitment, long experience and frequent publication.”

Not to mention a worthy exemplar of the power of a liberal arts education.

Read the article here.
Read an interview with Tim here.
Read more of his writing about Latin America here