Brent Harris — On Tuesday afternoon, the first two pieces of FieldTurf Duraspine Pro were laid out on the new soccer stadium at Mud Hollow Field.

View the latest photos of the project here. 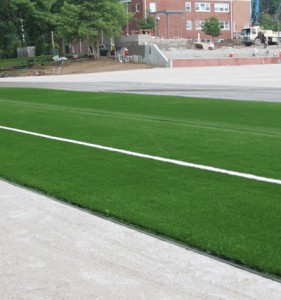 The first section of FieldTurf Duraspine Pro is now in place on the soccer field.

Bob Horchar, senior installer for FieldTurf, said he and his crew will spend the next two to three weeks getting every detail completed.

“We will start sewing the turf panels together, working from the south end of the stadium to the north end,” Horchar said. “After that, we will install the sidelines and the rest of the markings to the surface. That takes about four or five days to get all the soccer lines in place.”

Heavy rains and wind Tuesday evening washed away a small corner of sub-material that will need to be replaced before the final edges of the turf panel can be completed. Otherwise Horchar and his crew were unaffected by the strong storms that have hit the area over the past few days.

“Generally the weather doesn’t affect us at this point of the installation,” Horchar said. “Winds can sometimes be a problem. I’ve had turf panels move around in heavy wind, but unless we had a day we are working with electrical equipment, rain really doesn’t stop us at this point.” 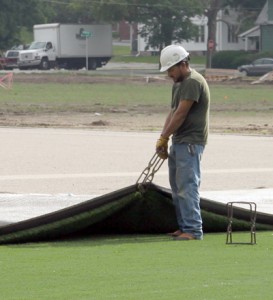 A worker stretches a section of FieldTurf to make certain the seams match.

Once the lines are cut and glued in place, the infill mixture of sand and rubber pellets can be added to complete the surface installation.

Work continues on other portions of the stadium, as well. Crews were pouring cement into forms for the new stands on the west side of the complex. New restrooms are also being constructed on the south end of stands. A brand new white storage building is also nearing completion on the south end of Mud Hollow Field. This structure will be used to store soccer and track and field equipment along with any other items that might be needed as part of the new fields construction project.

Portions of the east section of Mud Hollow Field are also beginning to take shape. Landscapers will prepare that area over the next two weeks before installing new sod for the fall practice and intramural season.

If everything is able to stay on schedule, the new soccer field should be complete “green” shortly after the Fourth of July holiday.