While the 2011 spring sports season ended a few weeks ago for the current Wabash College teams, a former Little Giant claimed an Indiana High School Athletic Association girls softball championship and a future Wabash student added a high school baseball title and mental attitude award to his list of achievements.

Chris Jones ’04 took head coaching position for the South Putnam girl’s three years ago. Since that time his Lady Eagles have posted a 71-4 record. However, the team’s biggest accomplishment came two weeks ago when South Putnam won the IHSAA Class 2A state softball championship with a 5-1 victory over Woodlan in the title game. 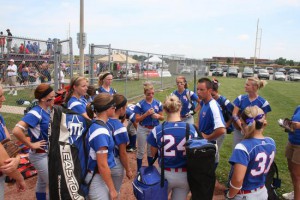 Jones’ transition to coaching came about in a unique fashion.

“I did my student teaching at Tri-Central and Taylor High Schools. While I was at Tri-Central, my sister – Tricia Hall – was teaching and coaching softball at Lewis Cass. She had me help out as her out with her team. We made it to the semifinals of the state tournament that season, eventually finishing fourth. That kind of got me started in the coaching business.

“When I took the teaching position at South Putnam High School, I started as a basketball and baseball coach. The next year South Putnam needed a softball coach. They saw my experience with my sister at Lewis Cass and asked if I was interested. The team had just won a sectional title when I took over, but we’ve really had some talented student athletes who have put in a lot of work on and off the field to get us where we are now.”

Jones and his South Putnam team have a bright future ahead of them.

“We’ve only had one senior player each of my first three seniors. My rising senior pitcher is planning to attend Arizona State and a couple of my players are already getting some Division I scholarship offers. We could have some success ahead with the hard work of our younger players. My goal, however, is to just be a positive figure in their lives. This is a great group of girls. They like to have fun, but they work hard, as well. I know they will be successful in life. I’m just proud to be a small part of their high school experience.”

On Saturday, just moments after Crawfordsville High School claimed its second baseball championship with a 8-3 win over Mishawaka Marion in the class 3A state tournament, senior Adam Boehm was named the L.V. Phillips Mental Attitude Award recipient. Boehm will be a freshman at Wabash this fall and plans to play baseball for the Little Giants.