Jim Amidon — August 25 — The Field Turf crew installing the new playing surface at Hollett Little Giant Stadium is entering the final phase of work. On Tuesday, the crew began spreading tons and tons of fine white sand, over which they spread billions of pieces of granulated rubber. 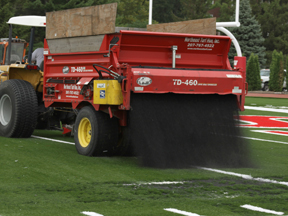 Two separate trucks were in the process of spreading granulated rubber Tuesday afternoon.

The process looks a bit like spreading fertilizer on your lawn — but using a fertilizer spreader on steroids!

After one layer of sand was spread, in came tons of tiny rubber specks. Once the rubber is spread, another tractor with a large agitating brush goes over the field, sideline to sideline, to work the rubber into the sand, even out the particles, and help the material settle as deeply in the turf as possible.

While the Field Turf guys are doing that, another crew is resurfacing all of the Owen Huntsman Track elements, including the approach area for the high jump at the west end of the stadium, and the long jump and pole vault runways on the south and north sides of the field.

Work could be completed as early as Wednesday, but is likely to continue through Thursday. The Field Turf guys like to let the materials settle for several days before players take the field.

Given how magnificent the new surface looks, keeping the guys off it could be a tough task for Coach Raeburn and his staff.