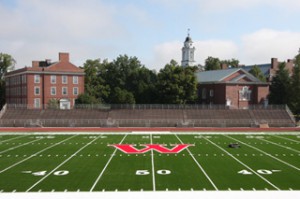 A view of midfield at Hollett Little Giant Stadium with the new red "W" now in place.

Work continued over the weekend on the FieldTurf at Hollett Little Giant Stadium. Matt Sanchez and his crew shaved and glued the giant — and I mean giant — red “W” at midfield Sunday morning. Today the crew will finish gluing the red “WABASH” logo in both endzones before starting the infill process. Once the sand and little black rubber pellets are in place and the finishing touches are applied over the next few days, the field will be ready for the 2010 Little Giant team.

View photos of progress at the stadium here.

Work is progressing on the new baseball stadium, as well. A marker is in place to designate home plate and four cement bases for the backstop have been poured. Both the first base and third base dugouts have also been defined, and will be slightly below field level. A photo album of the baseball stadium progress will be posted by Tuesday morning.

With the arrival of the freshmen class, the finishing touches nearly complete at the football stadium, and classes set to start Thursday morning, the 2010-2011 school year is underway.