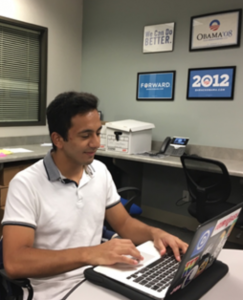 Daniel Cuevas ’21 — This summer, I have had the splendid opportunity to intern with the Indiana Democratic Party in downtown Indianapolis. For the first two weeks of the internship, I completed several small projects for all of the departments within the Party, including Communications, Finance, Compliance, Data, and Municipal. Some of the assignments I completed in those first two weeks were conducting research on the status of paid family leave within Indiana and the United States, creating social media graphics for the Party to use and checking in on the status of Democratic municipal campaigns across the state. Right from the start, I explored the various career paths that can be found within the larger field of politics.

After completing these projects, I chose to spend the rest of my internship working within the Data Department. The head of the department immediately had me work on some projects that would not only keep the Party’s large database organized and healthy but also teach me the importance of data hygiene. I assisted in updating and maintaining the Party’s database on VoteBuilder for voter and committee information. I am also starting to learn Sequel, a popular and useful programming language. Once I become proficient in Sequel, I will use the programming language to perform other functions related to voter information, including retrieving, sorting, and filtering data.

Although I serve as the Data Intern, I have still had the opportunity to perform work for other departments. I have completed assignments within our office like producing fact sheets for every mayoral race across Indiana, but I have had several experiences out of the office as well. I have assisted in organizing fundraiser dinners and lunches. I even had the chance to walk in the Indianapolis Pride Parade, which was a wonderful display of pride and resilience from the LGBTQ+ community.

I was curious to see what opportunities and experiences the internship would offer me this summer, and so far, I have been absolutely blown away. Indiana politics initially seemed like a large and daunting behemoth that I would struggle to grasp fully, but as I’ve interacted with the various departments within the Indiana Democratic Party, I have begun to see the bigger picture more clearly and understand the political system as a whole. However, I would not have had the opportunity to participate in this outstanding internship if it were not for the generous donors funding the Coons & Castle Public Service Award. If it were not for their financial support, I would not have been able to afford the rent, utilities, groceries, gas, and other expenses to be able to live in Indianapolis this summer and participate in this internship. I offer my most sincere gratitude to the donors for allowing me to take my learning outside of the classroom and explore the various career paths available after Wabash!