Tyler Ramsey ’21 LABB Intern – The fourth week of the LABB program entailed a lot of strategy and execution. The overall goal was to put each worker into a group and allow them to negotiate given a case to read from. The more detailed side of this includes each member being placed in a group which consisted of the management side and the labor side. The group 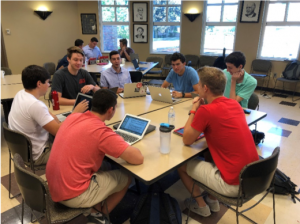 s were each assigned a reading that explained what company they worked for and what the negotiation would be about. The first negotiation was held on Monday and took approximately 2-3 hours. The negotiation required a fair amount of strategy for the groups as they planned out what was ideal for their company and their selves. Next came the execution, persuasion was a big factor in the negotiation as each side presented their argument with assurance they were correct. The overall success of the first day of negotiations was excellent as each group obtained certain knowledge about how to negotiate and what to do next time. The negotiation held on Wednesday had a lot more tension between the groups as they would not make it easy for the other side. Each group had a rather strong execution which made the whole process much longer than Monday’s negotiations. Passion was visible in each of the groups and a lot of skill was obtained during the whole process. The next round of negotiations will be held next week with the same groups. The thrill of negotiations then transitioned to a fantastic meeting with Class of 1984 Rob Shook, and Class of 2015 Corey Egler. The Wabash Alumni sat down with the LABB program and spoke about their journey after Wabash and how the college has created a platform for them that allowed them to face hardships, diversity, and simply life. The stories shared form these Wabash men gave each member of the program in the room a time to reflect on qualities like leadership and communication.