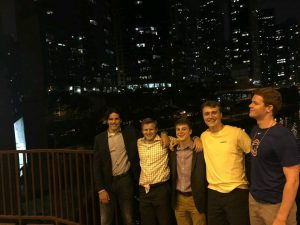 Aaron Sikorski ’20 LABB Intern – To begin, I would like to express the utmost gratitude for the Lilly Endowment for allowing me to take part in such a valuable experience. Over the course of 7 weeks, the LABB Program has provided extensive insight in many areas of business including marketing, leadership, entrepreneurship, and networking. For the past few weeks, we have applied this knowledge to a consulting project for Wabash College.

While no one seems to confidently be able to define “consulting” due to the varied applications of the word, all can agree that it involves a high degree of problem solving. Wabash College, though impressive in many ways, encounters problems every day. However, what sets Wabash apart is its confidence in the students themselves to solve the problems. Thus, when Wabash came to the LABB interns with two problems, we were more than ready to search for solutions. We split into two groups to get started; my group chose to work on the armory.

Because of its rich history and central location on campus, the armory has always been in serious discussions for potential renovations. However, a renovation has never been decided upon because of controversies with proposed budgets and other variables. Thus, we wanted to finally put the debate to rest once and for all. To begin, we targeted a budget constraint based on the results of previous budget proposals. Next, we reached out to David Morgan, who took us on an extensive tour of every room of the armory. We asked him and other campus service employees what could and couldn’t be renovated, and what they would like to see changed.

For the next few days, our group brainstormed potential changes in the armory based on what Wabash College is missing. We agreed that having two computer labs wasted valuable space in the armory, and ignored the increasing availability of computers campus wide. Along with the space currently occupied as a recreational room, we saw a lot of potential in the second floor. However, for many days, our group could not agree upon what that floor should be used for. Amid our discussions, we met with several members of faculty to discuss what they would like to see in the armory. While the faculty was very open to meeting with us to discuss, our conversations often led to listing all the problems the armory has, rather than what we could do to make it right. At the same time, we met with three local business to get estimates for painting, resurfacing floors, and designing a collaborative study area where the second-floor computer lab is currently. Finally, we worked on roughly how much it would cost to bring the recreational room into the 21st century.

Those four components alone nearly maxed out our budget, but truly did not scratch the surface on all that the armory needs. Thus, we concluded as a group that while the armory has potential, it has structural fallacies so large that a small renovation to increase student traffic into the building would be counterintuitive. In a presentation with Dean Raters, Dean Jones, and the President and Vice President of the Student Senate, we reported our findings. Although we were disappointed by our own conclusion, we were happy to finally cease talks on the armory.

This consulting project provided an incredible learning experience for myself and my peers. First, our meetings with staff and local businesses gave perspective on professional working environments. Secondly, collaborating with a group for an extensive period of time improved my leadership and multitasking skills. Finally, I realized through our conclusion that often the right decision is not the easiest one to make. I am positive that I will be able to apply the knowledge gained from this experience in many of my future endeavors.