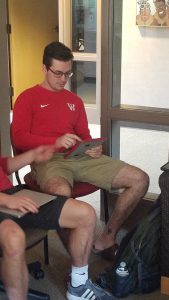 Secrest ’20 LABB Intern – First off, I would like to thank the Lilly Endowment for making it possible for myself and fellow interns to participate in the LABB program this summer. This summer has been a real eye opener as to what all it takes to start and run a business. Meeting and hearing the stories of many alumni has reassured me just how strong our Wabash Network is, or as my boss calls it, the Wabash Mafia. The LABB program also goes to show that business is in every industry so there are many benefits of knowing the basics of business. This gives me enthusiasm, being a Psychology major here at Wabash, that I can be an entrepreneur and not major in business. The program proves that having a liberal arts education can set you apart by being a well-rounded individual ready to think critically, and have the out of the box thinking that employers look for today.

During our program, we created two business plans, one for a food truck and the other for an app. The first one we completed was the food truck in which we were thrown into the lion’s den. After the learning curve my fellow interns and I experienced, we dove into our second business plan, the app. The hardest part about the app was coming up with was coming up with an idea that was not already out there in the market. However, the pressure was on because we were going up to Chicago to present our own group’s business plans in front of a tough alumni panel. The panel was made up of 5 accomplished businessmen: Howard Hallengren, Tim McHugh, Brian Mantel, Brian Ferrar, and David Bowen. My group ended up coming up with a cooking app called Fridgraid. We wanted to create a cheap and fast way to cook meals. Our app would provide simple recipes that are easy for someone who has never cooked before to follow. One thing all groups learned was make sure you research every detail it would take to make that app, because if you did not the judges would know.

With our plan for the app complete we headed up to Chicago. The night we arrived, we went to a networking event and meet many alumni who were eager to hear our business plans and our plans for what may come after Wabash. After the event, we headed to Gino’s East to get a taste of some famous Chicago deep dish pizza. We woke up the next day invigorated to give our presentations to show how much we learned from the past seven weeks. Man, did those judges grind us with questions. Luckily, we were prepared for most, but being beginners there was bound to be something that we had not researched.

Overall, the presentation was a valuable experience that I will never forget. I recommend any Wabash student wanting to go into business to apply for the LABB internship, because it will challenge you to think critically and have a great seven weeks doing it.