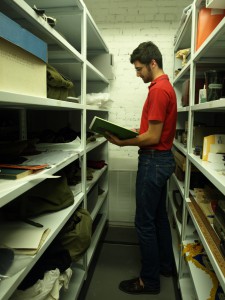 Steven Peters ’16 – This summer I am interning at The Carnegie Museum in Crawfordsville, Indiana. The Carnegie Museum focuses on the history of Montgomery County and includes a variety of interesting exhibits such as the Athens Gallery which focuses on military, political, and educational history in Montgomery County. The museum also has a summer program for children which allows them to become acquainted with the history of Montgomery County and the museum in a manner that is both educational and entertaining for them. For myself, I study classics, but have an interest in possibly studying archaeology after Wabash and decided that interning at the Carnegie Museum would be a good way to see how a museum is run and to also gain experience working with historical artifacts and researching different objects.

I have a variety of jobs at the Carnegie Museum, and no day is exactly the same. Some days I am working with collections, processing newly acquired donations. Other days I am doing minor research into objects and following that research up with a write-up. For example, we received the Tuttle time capsule from the Tuttle Middle School in Crawfordsville (which is being torn down) and I had to research the history of the Tuttle Middle School. I also on occasion have to work with children, helping them solve questions about the summer program and on Thursdays I lead the kids in “Making Stuff Safer” which is a program from Nova on PBS. Using gumdrops and toothpicks I show kids the basics of making a structure structurally sound and help them create their own structures. My main project for the summer, however, has been researching the Tribe of Ben-Hur. The Tribe of Ben-Hur was a fraternal beneficial society that was founded in Crawfordsville in 1894 and at one point had chapters in over twenty states and had over 100,000 members. It essentially was a fraternity that offered life insurance to its members. We recently received a large donation of Tribe of Ben-Hur objects and my job has been to research what the Tribe of Ben-Hur is (its history, purpose, etc.) and to identify the objects that were donated.

This project has given me a good opportunity to use skills that I have gained thus far in my two years at Wabash. One of the main skill that I have had to use is researching and being able to adequately discuss the purpose of objects and their history. I have dealt almost exclusively with primary sources, so I have to come to conclusions on my own rather than being able to simply google an answer or search scholarly articles on the subject. I have had to use some of that critical thinking that is inherent in a Wabash College liberal arts education to discern the nature of an object. For example, one of the objects that we received was a large metal key. The key by itself does not really tell one anything about its purpose, it is too large for any practical purpose. So I had to delve deep into the piles of Tribe of Ben-Hur materials to find some clue into its purpose. Eventually I found mention of a “golden key of life” within some documents (they involved an initiation ceremony). While it is not possible to say with 100 percent certainty that the key mentioned in those documents is the same large key in our possession from its description I can confidently say that it is likely the same key.

This internship has given me the opportunity to have a variety of different jobs which utilize my skill set as a Wabash student and to help me determine what my career path will be. I have learned that I enjoy the research aspect and discovery of new information aspect of the job, while tasks such as data entry do not interest me. I have also gained a greater appreciation for Crawfordsville and Montgomery County through the research I have done and the history I have learned. I thank Lilly Endowment, Inc. for this opportunity to explore a career path that I am interested in and to improve upon and use the skills I have gained while in school.