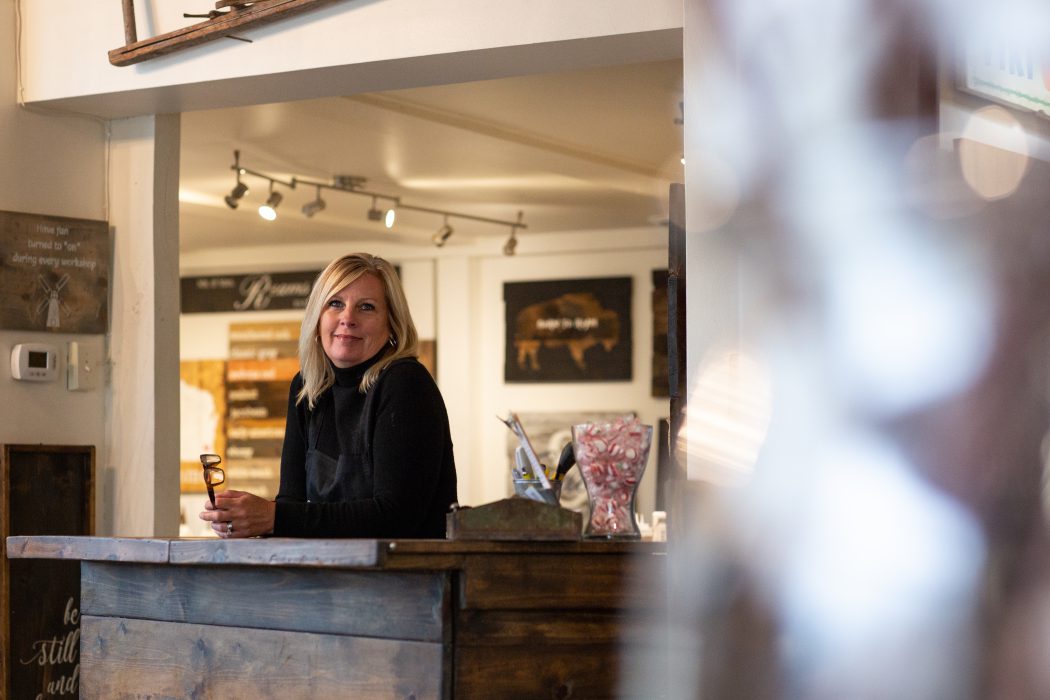 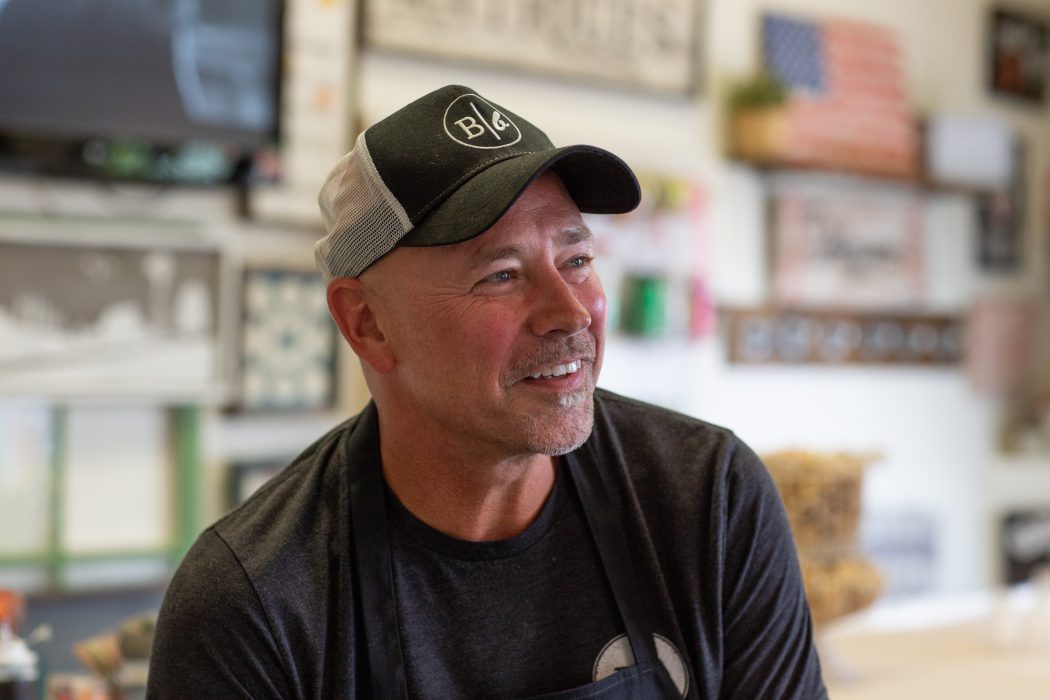 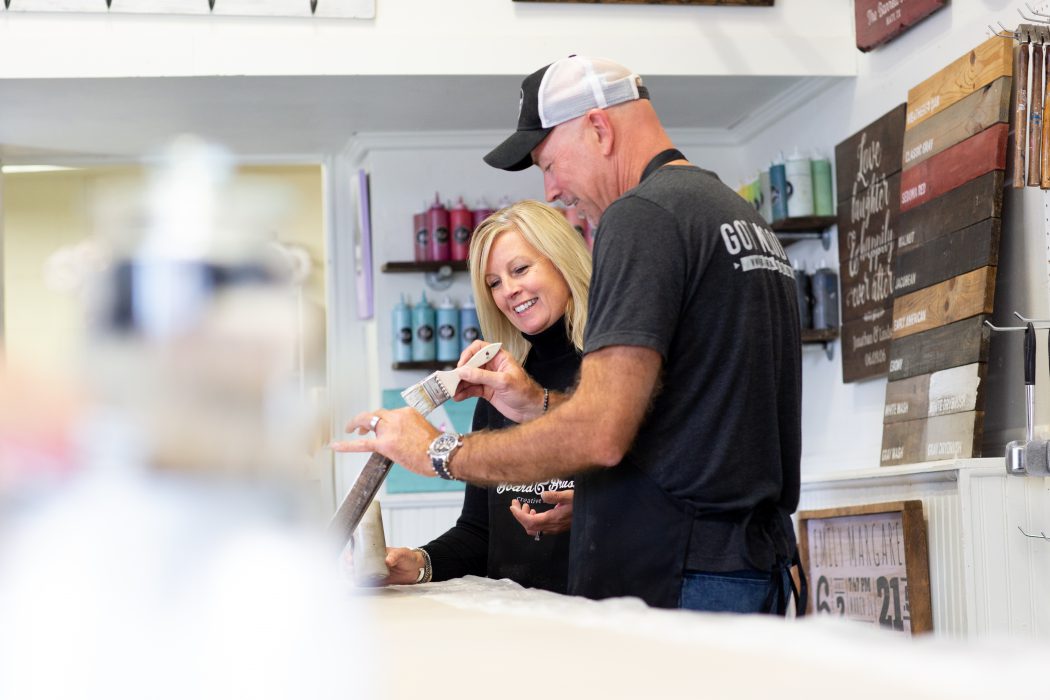 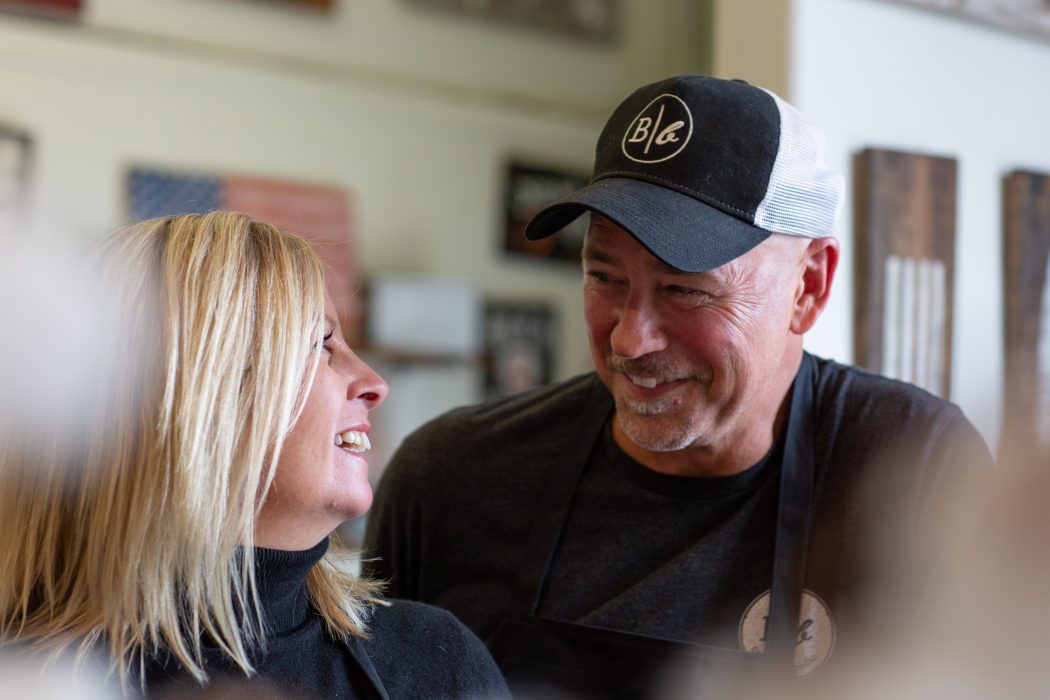 Born in a basement during a holiday craft party, Julie and Curt Selby’s Board & Brush franchise is re-shaping their lives as it inspires others to make friends and memories.

They were high-school sweethearts, like Mellencamp’s “Jack and Diane.”

“Two American kids growing up in the heartland.”

Curt Selby ’89 grins at the comparison.

“I was all about Julie and football and having a good time.”

“That song did come out during our time in high school,” Julie says.

Thanks to his strong throwing arm and recruiting by Rem Johnston ’55 and Wabash football coach Greg Carlson, Curt stepped off the field at Fort Wayne, Indiana’s North Side High School and into Little Giant Stadium.

Julie majored in marketing at Purdue University, just up the road from Crawfordsville.

“I pretty much had the world by the tail,” Curt says.

College days flew by faster than a three-step drop. Curt took his first job in human resources with Dana Corporation, while Julie went to work in the marketing department at Lincoln National Life.

“We knew we wanted kids someday, but we were also career motivated,” says Curt. “When Julie became pregnant with our first daughter, Jenna, it was pretty much a toss-up as to who had the most earning potential. In fact, Julie might have been making more. But in the end, we decided that Julie would be the stay-at-home mom and I would be the breadwinner.”

So began the Selbys’ life of “ladder climbing” and child rearing, of promotions and out-of-state relocations, of two more baby girls and 12,000 diaper changes, of volleyball-team mom and multiple home-remodeling projects. The couple shared the work on many of those efforts, but with Curt traveling worldwide for work and gone for up to three weeks at a time, Julie was a DIYer before most people knew the term.

“I was always pretty frugal,” Julie says. “If I wanted to do something, I’d give it a try. I could usually figure it out.”

That mindset would soon launch a business.

“I saw a sign in an antique shop and thought, There’s no way I’m paying that kind of money for that—I can make it.”

“I came home from work one day a few years ago and Julie was making that first prototype sign,” Curt recalls. “I had no inkling that this could ever become a business. But she put a picture of that sign on Facebook and friends said, ‘Oh, my God—did you make that? Can you teach me how to do that?’”

Fast-forward to Hartland, Wisconsin, during the holiday season of 2014. Two of the Selby’s daughters are in college, one in high school, and Julie is in a new neighborhood wanting to meet people.

“I’m not an outgoing person, but you need to have some sort of personal interactions, and I’d always gotten that from our daughters’ activities,” she says. “I was enjoying making these signs, and having people over to do a craft together is a great way to meet a bunch of people without having to be good at small talk.”

The Selbys hosted a holiday party for the neighbors. After dinner, Curt and the guys stayed upstairs and played poker while Julie and the women went to the basement to make personalized wooden signs. Those holiday signs were a hit, Julie posted them on Facebook, and more friends wanted to participate. Three weeks later the Selby basement was full of eager women wanting to make their own wooden masterpieces. All the materials needed—wood, glue, paint, hammers, and nails— were waiting for them, along with the wine. Lots of wine.

The evening was an overwhelming success, and on that cold December night Julie realized she had discovered her niche.

“As I was teaching the workshop, I realized, Hey, I’m really enjoying myself,” she recalls.

The sense of accomplishment and the easy social interactions guests found in those first “workshops” remain at the heart of Board & Brush’s success.

“People come in and make something with their own hands and are successful. They get to show others, ‘Look, I made this!’ And they get to be entertained, to socialize, be a community. That was all there that night.”

At that same time, Curt was chief human resources officer at a company in Milwaukee and was considering a change.

“I had thought about looking for another opportunity, but really didn’t know what was next for me,” he says. Hoping to support Julie’s efforts, he spent evenings and weekends building out the first Board & Brush studio, with some help from pledge brother Art Equihua ’89 and his wife, Anne.

“I enjoyed the work so much that I joked about how great it would be if I could just build out studios for a living,” Curt recalls.

A few weeks after the first studio opened in March 2015, a customer asked Julie to put her in touch with the franchise owner. The woman thought the business would do well in nearby Elm Grove, Wisconsin.

But Julie did. She met with two attorneys at a firm in Milwaukee that specialized in franchising.

“The first 30 minutes were free, and at about that point in our meeting, they started looking at their watches,” Julie recalls. “Then one of them said, ‘Why don’t you come back when you really know you’ll be successful.’

“I thought, Really?! I was very frustrated.”

She found a local attorney with business experience who hit on a solution.

“She said, ‘I think I know what you can do now,’ and she came up with our licensing arrangement,” Julie says. “She’s phenomenal!”

With new studios on the horizon, Curt’s wishful thinking became a possibility.

“We approached Anne and Art about opening a studio in Crown Point, Indiana,” Curt says. “When they said yes, I decided to roll the dice. We figured we would give it six months and if it didn’t work out, I would go find another job in HR.”

It worked out. By the end of the third quarter of 2016 there were more than 40 Board & Brush studios. The company hired a Chicago firm, and with its help, the Board & Brush Creative Studio franchise was off and running by early 2017.

Today there are nearly 250 Board and Brush locations in 39 states. Earlier this year, Entrepreneur Magazine ranked Board & Brush Creative Studio the 39th Fasting Growing Franchise and 23rd in the Best New Franchise category. Curt has settled into his role of vice president, in which he oversees the five corporate-owned studios, secures locations and provides site approvals for new franchised locations, and helps manage the support staff that has recently grown to more than 15 full-time employees.

Julie says Curt’s more deliberate approach provides “a balance” to her own style. His “calm” and his confidence in her vision keep the ups and downs of a new business in perspective. She grins as she thinks back on the way those Milwaukee franchise lawyers looked down their noses at her fledgling business.

“Those attorneys probably did the best thing they could have ever done for me.”

Curt nods, looks at his wife, and smiles.

Before Board & Brush, Julie Selby was a stay-at-home mom while Curt spent weeks on the road as an HR executive. Once he focused on Board & Brush full time, Curt took on the responsibility of getting their youngest daughter ready for school while supporting Julie’s work at the country’s 39th-fastest growing franchise.

WM asked the couple about the risks and rewards of switching roles at home and being together pretty much 24/7.

CURT: The best part of this gig is that it is our business. We work very hard, but we get to have flexibility with our time.

JULIE: The best part? I get to wake up and have coffee with my husband, best friend, and partner in business. His calmness helps provide a balance to every part of our lives now. The worst part is that running and growing a new business can be an all-consuming affair.

CURT: When you’re working with your spouse, it’s almost impossible to “turn it off.” We went from me traveling the world to working together in a 10′ x 12′ space, with me yelling, “Hey, who has the stapler?” Our work day would end, we would sit down for dinner, and 10 minutes later we would start talking and/or arguing about the issues we faced that day.

JULIE: It’s hard to put the business on the back burner and just enjoy life or each other.

CURT: We implemented a rule earlier this year. We are not allowed to talk about work after 6 p.m. unless it’s an emergency.

JULIE: The first week we did that we’d say, “Well, what are we going to talk about?!” We’re getting better at it now, though.

CURT: And unless it’s an emergency, we’re better off waiting another day to talk about it anyway.

JULIE: You’re just too tired after a long day. Just enjoy your glass of wine together and don’t stress about work.

WM: Has this change in roles, in work, changed the way you see each other?

CURT (TO JULIE): You are a completely different person. You look the same, the core is the same, but you’re different.

We’ve been married almost 30 years, and that doesn’t happen without love, patience, respect, and appreciation. And we have similar tastes, similar perspectives on parenting, on most things. But we’re almost completely different when it comes to business perspectives, how we deal with people and approach challenges.

At first the change was a struggle for the kids too, who had been used to having a mom doting on them—the team mom. Of course, they’re in college now. But with Emma, our youngest, who was still at home, that was a blessing for me. All those years I had traveled I missed a lot with the other two girls. With Emma, I was the one who made sure she was up in the morning, and fixed her breakfast.

I thought that was great, and Emma didn’t mind. But I think she missed being the focus of her mother so completely.

JULIE: It was hard for me not to do, because it’s what I’ve done all these years. But not many people get the opportunity in life to switch roles, switch goals, to get to be the primary caretaker and emotional support for a child.

CURT: Julie is very good at what she does; if she wasn’t, this would be harder to swallow.

It has taken me a while to realize just how good she is.

I used to get really frustrated with her regarding this branding stuff. She’d say, “We’re doing it this way—how many more times do I have to tell you? We’re not compromising.”

Today, what people love about Board & Brush is that brand. We’re very well known today—the brand is really important, and she saw that from the beginning. It took me awhile.