“He saved my life. How do you thank someone for something like this?”

The reality that he would be donating a kidney to his former high-school teacher didn’t hit Tom Murtaugh ’88 until the hospital called to tell him which kidney they would be taking. 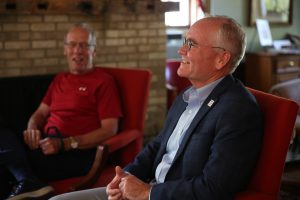 “They do scans of both to determine which one is best for donation, and a few days later a nurse called me and said, ‘They’re going to take your right kidney.’ It was like, Wow, this is really happening.”

For Dave Knott ’69, living with kidney disease had become all too real.

“You’re less and less able to do all kinds of things. I couldn’t run anymore, couldn’t play with my grandkids—I felt weak and tired all the time.

“I’d been on dialysis for five months, which kept me alive, but it was awful. I was becoming a shadow of my former self.”

So when Knott learned from a friend that his former student would be giving him a kidney and wanted to meet, Knott invited him to his home.

“He was going to change my life in so many ways,” he says.

During a Knott family dinner in Indianapolis a week before the transplant Murtaugh realized his own life was about to change in many ways, too.

“Hard but fair” is how Murtaugh remembers Knott from when he was his geometry and economics teacher and a football coach at Lafayette’s Jefferson High School.

“My first introduction to Wabash College was through Dave,” Murtaugh says. “I saw how dedicated he was to his profession, how bright and passionate he was about teaching and coaching.

“At that age, those things make an impression. I admired him.”

Years later, as Murtaugh was working in the mortgage loan business and serving as a Tippecanoe County commissioner, the two would occasionally see one another at the local YMCA.

“He was there often, working out,” Murtaugh says. “I remember once we were walking out together and I mentioned how much I appreciated him as a teacher, how much I had learned from him.”

Murtaugh had no idea that Knott suffered from a genetically inherited kidney disease called glomerulosclerosis, and that his kidneys were beginning to fail. Doctors had discovered symptoms of the disease after examining him following an injury at a track meet. His kidneys were losing their ability to filter his blood, and he learned then that someday he’d need a transplant.

In 2014 his wife, Barbara, donated a kidney to him, but it started to fail after four years.

Murtaugh read about Knott’s need for a second kidney after seeing a Facebook post by Knott’s daughter, Sarah.

“It had a link to IU Health’s Living Donor Program and a very simple questionnaire,” Murtaugh says. “I thought about that for a couple of days, then on a Sunday, I told myself, I’m going to do this. I filled out the form and IU Health called me the next day.”

He spent 45 minutes on the phone with a coordinator answering medical questions.

“She said that everything sounded fine and asked if I’d be willing to start the medical testing.”

That process began in late October, and Murtaugh wasn’t cleared for surgery until February as various tests were scheduled and completed. The final hurdle was a full day of tests and meetings at IU Health, including sessions with the surgeon, patient advocate, nephrologist, a social worker, and a psychiatrist.

Once cleared, Murtaugh set up the meeting with Knott through their mutual friend.

“That came from out of the blue,” Knott says. “I had no idea any of this had been happening. I had even called IU to see if anybody was in the pipeline, and they’d said, ‘We can’t tell you.’ And they can’t. Because you get your hopes up, and then things don’t work out.”

“I remember thinking, This is going to be awkward,” Murtaugh says of his walk to the Knott’s front door.

“I hardly had time to prepare,” Knott recalls. “He saved my life. How do you thank someone for something like this? I’m just not very good at expressing that.”

If there was any doubt about that gratitude, the entire Knott family erased it at a dinner a week before the surgery.

“It was my first time meeting the kids and grandkids—this amazing family,” Murtaugh says. “Each of the kids brought me a gift that reminded them of their dad.”

“I give my kids practical gifts at Christmas, so that’s what they did for Tom.”

“There was a rubber mallet, a shovel, duct tape, and a handful of those electrical socket adapters with his name on it.” Murtaugh smiles. “The grandkids drew pictures for me.”

“It was their way of making Tom part of the family,” says Knott.

Knott’s daughter, Betsy, told Murtaugh later, “You didn’t save one life; you saved two. You have most likely saved my mom’s life as well.”

Surgery was a rainy morning on March 28. Knott and Murtaugh drove to the hospital in Indianapolis together.

“It felt like Christmas Day!” Knott laughs. “I will never get over that—he was giving me a second chance; I was going to return to normal again.”

The two were prepped for surgery in rooms facing each other.

“His kids were checking on me, wishing me well, going back and forth between his room and mine,” Murtaugh recalls. “They sat together with my sister, cousins, and some friends during the surgery. They have all these stories about what transpired during the course of the day; they became friends, as well.”

Murtaugh’s surgery finished at 1 p.m., with Knott’s wrapping up about 3.

“The first thing I remember the surgeon telling me was, ‘You got a large healthy kidney.’ Then he said, “Welcome back—you’re one of us again.”

relaxing in the College’s Forest Hall three and a half months after the transplant, Murtaugh says he is fully recovered.

“I was off work for three weeks, and now I feel great,” says Murtaugh. “They will monitor my kidney function for about a year just to make sure, but there’s absolutely no reason to believe I won’t live a normal healthy life.”

Knott says the pain from his own surgery is nearly gone, he’s feeling great, and the transplant seems to be working very well. He praises the work of his doctors and the team at IU Health.

Murtaugh is more confident than ever about his choice.

“It’s a very personal decision, so it’s one each person should put some thought into. It seems to have turned out the best that it possibly could have.”

The bond the men share through their Wabash education played a part.

“I think we both would say that Wabash made us the men that we are,” says Murtaugh. “Without the background I had at Wabash, I don’t think I would have had the personal courage or fortitude to even run for elected office, not to mention so much else I’ve done in my life. I think a lot of this decision had roots in what I learned here at Wabash.”

“The College’s mission statement talks about living humanely,” Knott says. “That’s what Tom is doing. He’s living humanely. Think about others more than just yourself— that’s part of the fabric of the place, is it not?

“I asked my surgeon, ‘How do I thank someone who does something like this?’ But he told me that for people like Tom Murtaugh, a ‘thank you’ is usually enough.”

“The community support has been humbling.”

He still talks with Knott’s wife and family. He has those gifts and drawings from the family too.

But for Murtaugh, who knew Knott first as an inspiring teacher, now as a grateful friend, the greatest gift is the man himself.

“Truly, it’s great seeing him back to his normal self. It warms my heart that Dave is doing so well.”