What’s a 12-year-old kid to do when the 40-watt bulb that runs his blue lava lamp stops working?

For Joe Whitaker ’19, the answer was simple. Give it more heat. In the microwave.

“I had made popcorn in the microwave before, and that took two minutes. So, obviously, I knew I should put the lamp in there for 15 minutes.”

He pressed start and left. 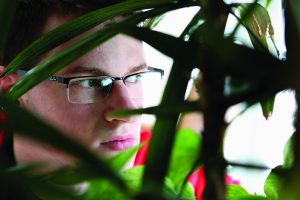 “I don’t remember where I went, but I heard what sounded like a pipe bomb go off in our kitchen.”

The wall was covered with splatters of burn marks and blue goo, and his mother was going to be home in five hours.

“I knew my mom would never be understanding of this blue goo. I had to make it look like I was making something that wasn’t a lava lamp.”

With broken glass and a can of Spaghetti-O’s, he turned the kitchen into what he thought looked like “a regular microwave crime scene.”

“Except for the blue goo, which I decided to tell my mom was just microwave fluid.”

“There’s not a lot of reasoning behind the things I do.” He smiles. “At least not solid reasoning.”

While that fiasco didn’t end so well for him, another “mistake” brought Whitaker, a biochemistry major and psychology minor, to Wabash.

“His baseball games were better because I just liked playing in the dirt.”

But then he watched the 2012 Olympics.

“It was my sophomore year of high school. I knew I couldn’t do gymnastics, and, for some reason, I thought swimming would be easier…it’s not.

Between his junior and senior year, he decided to visit Wabash. As he was filling out the admissions form, he noticed there were boxes next to different coaches’ names. Because he was a swimmer, he checked the box next to the name of then-swim coach Brent Noble.

The next year, he broke two school records, went the first eight meets without losing an event, and ended back up on Noble’s radar.

“I was invited back for recruiting visits, and that was what got me on campus a lot. Then I fell in love with the campus and really enjoyed it here.”

Still, Whitaker almost chose Indiana University. He knew Wabash would make him work. He knew that swimming in college would mean 5 a.m. practices. None of that sounded very appealing.

But he eventually decided on Wabash because “the right decision is always the harder one to make.”

He learned that from his mom.

“My mom’s made harder decisions than I can imagine. I think she makes more hard decisions in one day than I’ve ever had to make.” 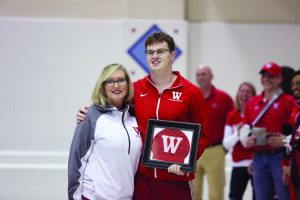 Whitaker lived in two houses on the eastside of Indianapolis during his childhood—one on 16th Street and Post Road, the other just one block over.

“When my parents divorced, we moved with my mom to the house on the other block. My dad was an abusive alcoholic, but at the same time, he was still my dad.

“There were incidents that led to us living primarily with my mom and occasionally seeing my dad on weekends.”

One of those occasional visits was Father’s Day 2007, when Whitaker was 10 years old. Not even a month later, his father took his own life.

“When that happened, my mom started to struggle financially. There wasn’t any supplemental income. I was at risk of being taken out of school because we couldn’t afford it anymore.”

An anonymous donor from his church stepped in to fund the rest of his time at a Catholic grade school. Continued financial support allowed him to attend Cathedral High School, and federal aid and scholarships have helped him through Wabash.

“That’s been a really big theme throughout my entire life,” he says. “People, out of the kindness of their hearts, helping me continue my education and make my life better.”

But still, sacrifices had to be made.

“There have definitely been negative moments and things I wish I could change,” Whitaker says. “But, at the same time, there have been so many other positive moments that it all averages out to be a really good life.”

“Joe’s perseverance is difficult to match,” former roommate Kyle Louks ’19 says. “I’ve seen Joe when he’s been beaten down, but I’ve never seen someone fight so hard to not only make the most of situations but to succeed in the hardest situations.” 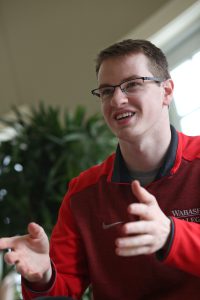 One thing he didn’t get from his mom is his sense of humor, at least according to her. However, she says her son’s passion to make others laugh was obvious from a very young age.

“Joe is one of the funniest people I’ve ever been around,” says Professor of Psychology Bobby Horton. “He’s so fast, but it’s a dry-ish humor too. He doesn’t seem to be trying. He just says these things that are hilarious and self-deprecating.

“That quick mind that produces all of these quips and stories is the same sort of quick thinking about information and material that makes him a fantastic student.”

Professor of Chemistry Wally Novak remembers the day Whitaker came in to give his final senior presentation—in an elf costume.

“He comes in with his coat on, takes it off, and he’s wearing this silly outfit. Then he does this presentation that’s, well, really funny, but also scientifically correct.”

Earlier in the semester, when Novak gave the six students in his advanced biochemistry course a particularly difficult problem, he figured he’d have to help them the next time they met.

“The next class period I asked, ‘Did anyone get this?’” Novak says. “And they all raised their hands. So I asked one of them, ‘How did you get it?’ And he said, ‘Joe helped me.’ Then I looked around the room and they’re all saying, ‘Joe helped me.’”

“Joe is probably the most amazing person I’ve had the pleasure of knowing,” friend and fellow swimmer Wes Slaughter ’21 says. “I’m not sure how he does it, but Joe manages to brighten people’s days wherever he goes.”

“There are certain students that you want the world for, and part of that is because they’re not demanding it, and Joe is one of those,” Horton says. “You just want him to feel as good about as himself as he deserves to.”

Whitaker says he gives of himself because other people have given him so much. It’s the same reason he wants to become a doctor.

“I know that seems very specific, but my nephew was born on March 2, 2011. He ended up having a heart attack and had to have open heart surgery on March 8.”

He was fascinated watching hospital staff who were dedicated to helping other people, but, back then, that’s as far as it went.

“I didn’t understand everything in that moment because I didn’t really know my nephew. To me, he had just been a bump in a stomach. And then for a few days, he was just a baby that cried. But then he became a baby that couldn’t breathe.

“I knew that I loved him, but I didn’t know him. As I’ve gotten to know him, the life that was there then has become invaluable to me.

“How do you repay something you can’t put a price on? For me, that means med school. I’d love to do that for other people.”

Whitaker, a fellow with the Wabash College Global Health Initiative, was recently accepted at the Indiana University School of Medicine and will begin his studies in the fall.

“Joe is really smart, and I would take his analytical mind as a physician in a heartbeat,” Horton says. “But when you add his personal sensitivity to it, it’s a really cool combination. Joe will be the one you’re going to want next to you, the one you want to deliver information—whether it’s positive or negative.”

“He’s just easy to spend time with,” Isaac Hunter ’19 says. “When we did biochemistry research with Dr. Novak over the summer of 2017, one of my best memories was racing around Wabash on two kid-sized electric mopeds he was fixing for his family. Even though our actual research was falling apart at every turn, I don’t think we ever went a full half-hour without a good laugh or a quality conversation.”

Whitaker’s passion for helping others turned a presentation about substance abuse in Montgomery County into volunteering at Half Way Home, a 180-day rehabilitation program for women.

“When the director of the program asked me if there was anyone in my family who had suffered from substance abuse, my first answer was no. I didn’t realize how much alcoholism is a part of it.

“Even though my dad did things that were bad, they’re not things I associate with him—it was what he was struggling with. It’s a similar story at Half Way Home.”

When Whitaker said he wanted to help out the program any way he could, the director asked if he would be interested in teaching one of their life skills classes.

He said, “Yes.” No hesitation.

Where they needed the most help was in a class that taught home maintenance and auto repair, so she asked him if he was handy.

He said, “Yes.” Again, no hesitation.

But there probably should’ve been.

Determined to be true to his word, though, Whitaker went back to his room that night and dismantled a wall socket and replaced an outlet. In a matter of weeks, he was helping his older brother with drywall and using his car to teach the women of Half Way Home how to change a tire and check the oil.

The things Whitaker was teaching were, in his mind, tasks that are often “on the man’s chore list.” He wanted to give these women the ability to do it on their own—just like his mom had done.

“I guess I don’t know what I’m missing without a dad sometimes. I don’t want to downplay my dad’s role as a father, but, for most of my life, my mom was that role. There aren’t things I can point at and say, ‘This is what a father should do,’ but I know that everything my mom did is something I want to do.

“Someone once said that they can’t remember any specific line from a book they’d read, but it changed them nonetheless. That’s what it’s like after growing up with my mom.

“If I grow up to be the best man possible, I think I’d want to be just like my mom.”