“IF YOU ASK ME, THE DRUMMER IS THE HEART AND SOUL OF THE BAND.”
—Ward Poulos ’96, co-founder, ZipRecruiter

WARD POULOS ’96 still thinks of himself as a drummer first.

He’s been playing since he was a kid. He played in bands, including one that regularly rocked out while practicing on the Ball Theater stage. He thought about majoring in music.

Even today, based in Santa Monica, California, Poulos has an electric drum set in the house and wishes his daughters would play. He and some of his old bandmates reunite regularly to play and, occasionally, record together. 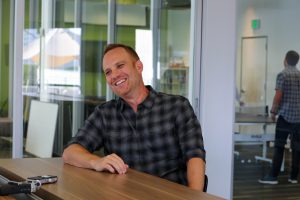 “If you ask me, the drummer is the heart and soul of the band,” he says, grinning.

It was practicality that got in the way of his march to musical stardom. Still, he’s managed to make noteworthy contributions through similar collaborations.

Today, Poulos is the co-founder and chief design officer for ZipRecruiter, an online employment marketplace with the top-rated job searchapp on iOS and Android.

“I was always the guy playing in the band who went to an office job in the morning,” Poulos says. “I needed to combine creativity with something business focused.”

He says he’s always been artistic, doodling in the margins of his college notes and simply creating. He thought about designing cars. When the Internet was gaining influence, the philosophy major learned Photoshop and how to build and code websites. It was the kind of creative outlet that could pad a paycheck.

Soon he discovered a passion for designing software and solving product problems, rather than merely focusing on the visuals.

“I found my groove in my late 20s and early 30s in creating web software that really worked well,” he says. “I think about human-centric design principles and the things that make a website work efficiently and solve problems.”

Poulos put that valuable skillset to good use with Ian Siegel, Will Redd, and Joe Edmonds in co-founding ZipRecruiter in 2010. With more than 1.8 million businesses and more than 500 million candidate applications serviced to date, he continues to improve on those human-centric design principles daily.

As the chief design officer, he heads the team that composes what is seen when users interact with ZipRecuiter.com or the app. Poulos leads a team of roughly 30 people whose job it is to solve user-experience issues, some in real time.

Poulos wants each user to get a more human feel from the app.

“It’s software that engages you on an emotional level,” says the Indianapolis native. “For today’s generation everything is instant. There is no patience for submitting your résumé to a potential employer and waiting a month to hear back. We can connect you instantly with a job that matches via text message. That’s such a personal interaction.”

As a drummer, Poulos knows there is more to the job than simply keeping time. In the same way he creates space for his fellow musicians to play confidently and freely, Poulos does the same for his co-workers. As co-founder he could have a lofty perch—a third-floor office above the fray in downtown Santa Monica or in satellite offices in Tempe, Arizona, or Tel Aviv. But until recently he didn’t even have an office; he worked in the design group’s bullpen with everyone else. In his mind, he and the rest of the “band” are still building the ZipRecruiter brand.

“I still see what we haven’t done yet,” he says. “I see all the flaws and that’s what I come in every day to fix. I’m literally in the code fixing problems on an hourly basis. If I hear something from one customer, I’ll fix it for them.

“It’s very one-to-one at the end of the day and it has to feel that way to people,” he says. “If you can’t communicate the human side of it, then you are just software and people will forget about you. I want them to know that there are people on the other side of what they are using.

“We want to put a little bit of empathy into our product for someone who is unemployed or just lost their job. We think about that all the time.”

“An Equal Partner at the Table”

Whether he’s leading his team in Santa Monica, heading up a session in Arizona, or meeting with top executives, Poulos’ number one asset is his confidence. WM asked, “Where did you get that?”

“One thing I took from my education at Wabash is thinking of things from a different angle—coming at a problem with a wacky idea to spur some other wacky ideas that eventually come back around to something that works.

“Having the confidence to do that and not feel like you are going to get laughed at is something I took away from my college experience. My classes at Wabash were an environment where I could be sitting in, say, [Professor] Glen Helman’s house or [Professor] Bill Placher’s house meeting and we could just have a chat. I felt like an equal partner at the table, even though I was a 19-year-old kid. My ideas were valued, and that instills confidence in anybody.

“I always carry around this sense of accomplishment and confidence.”