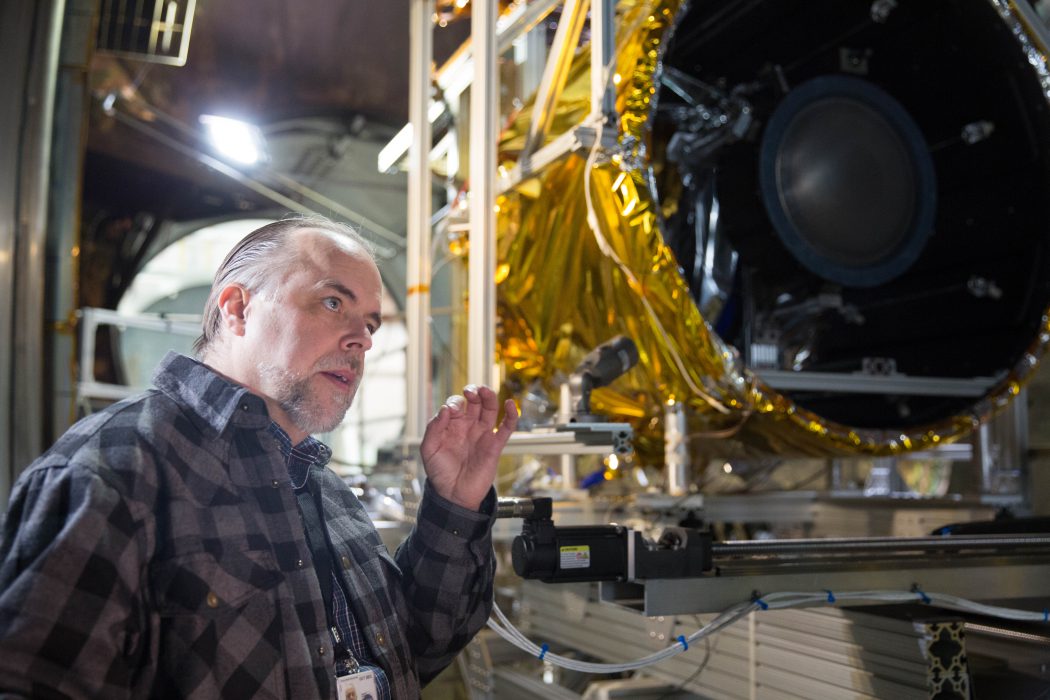 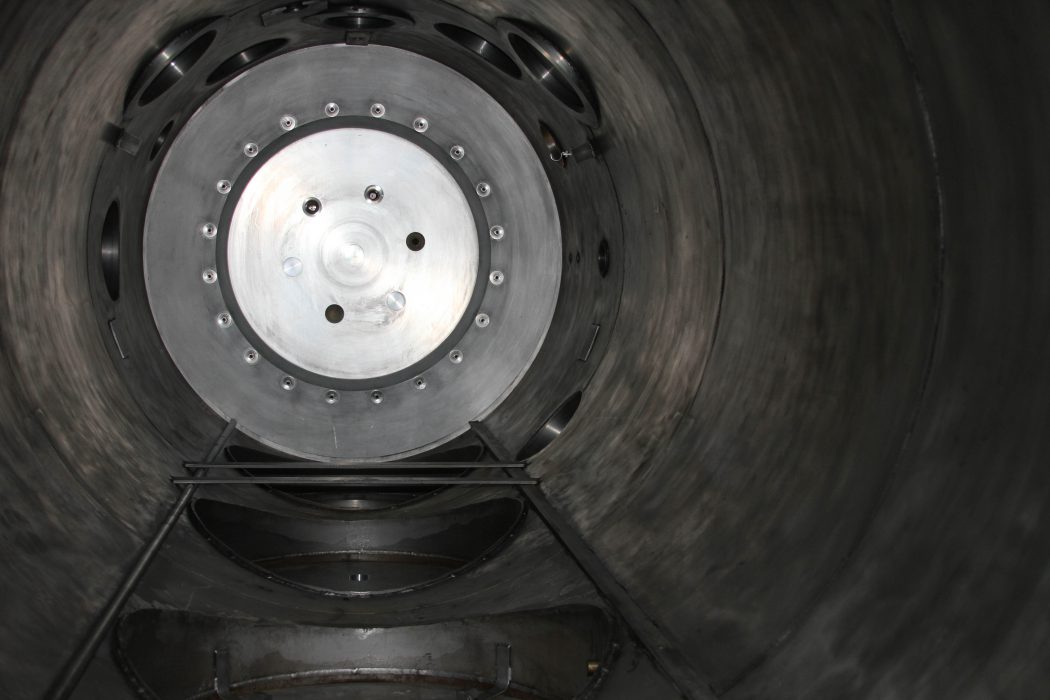 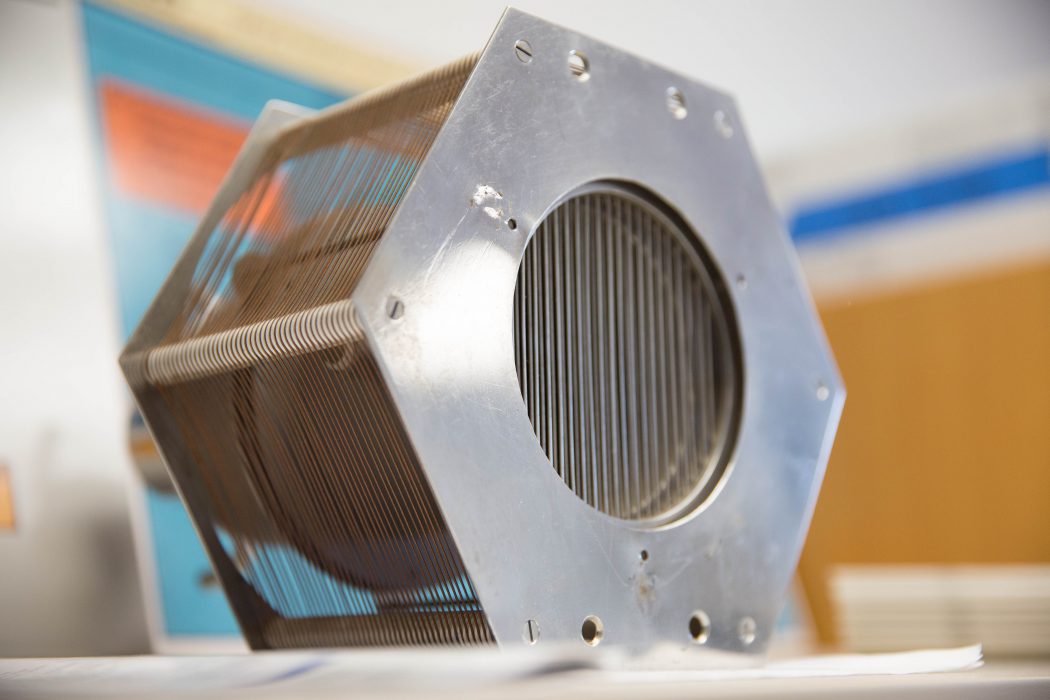 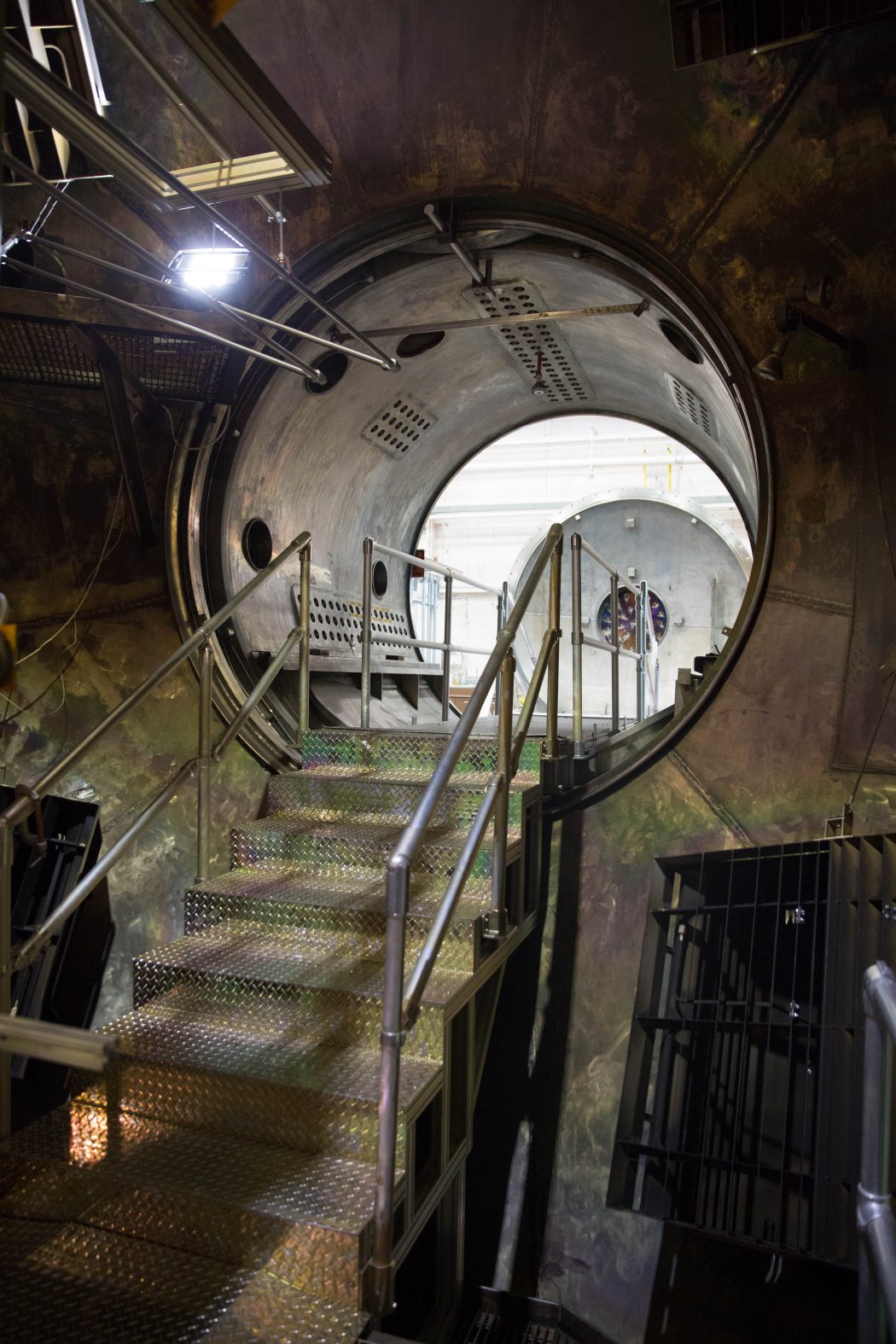 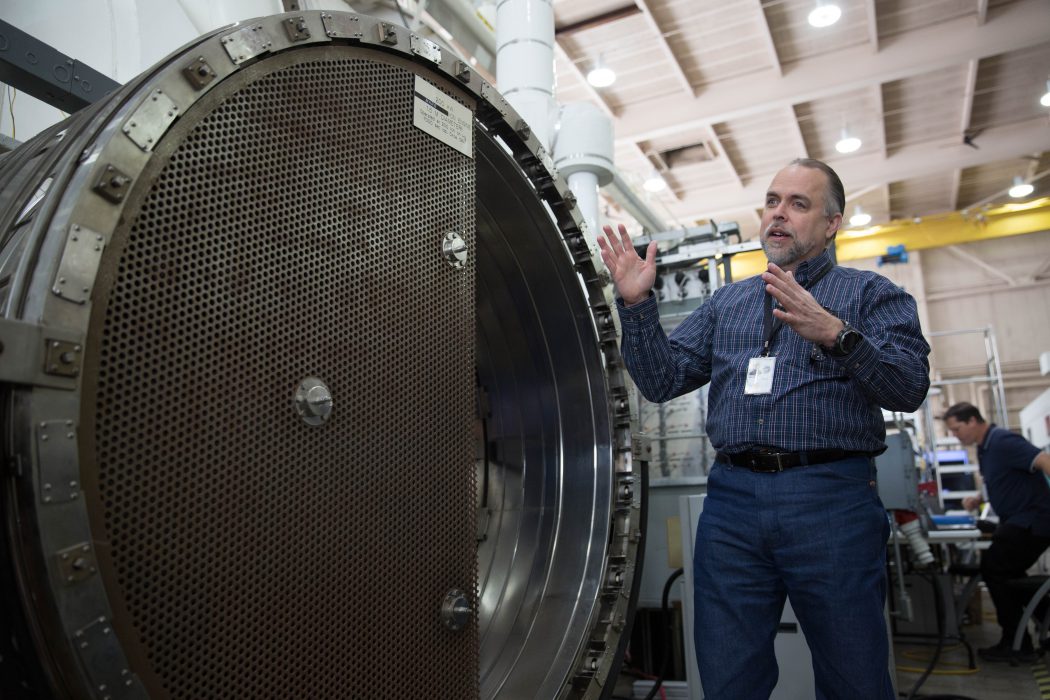 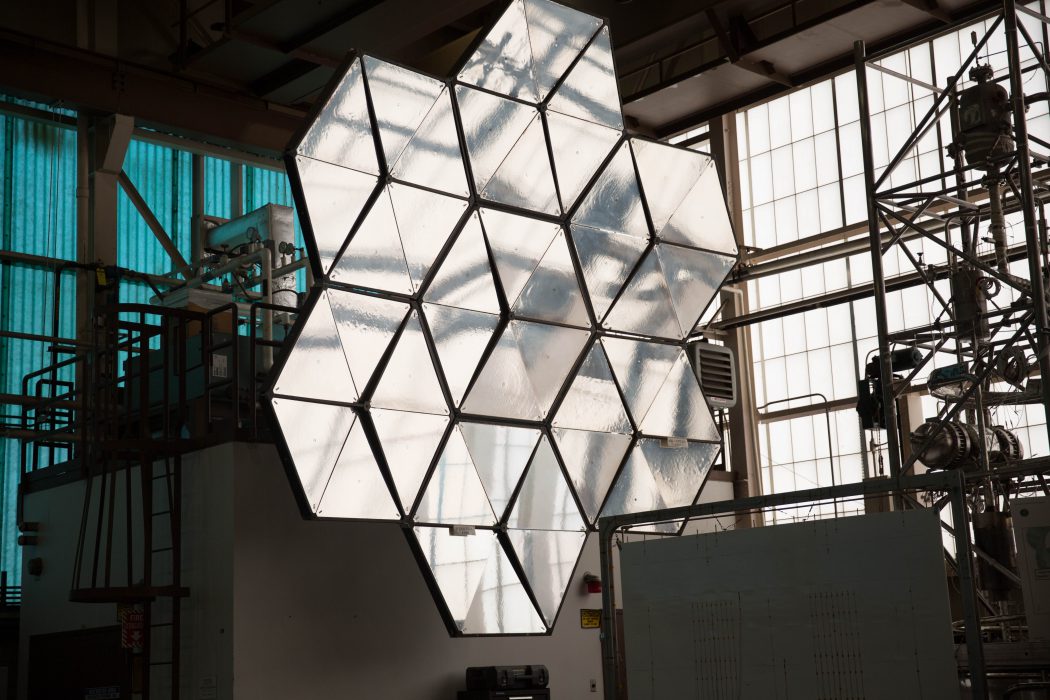 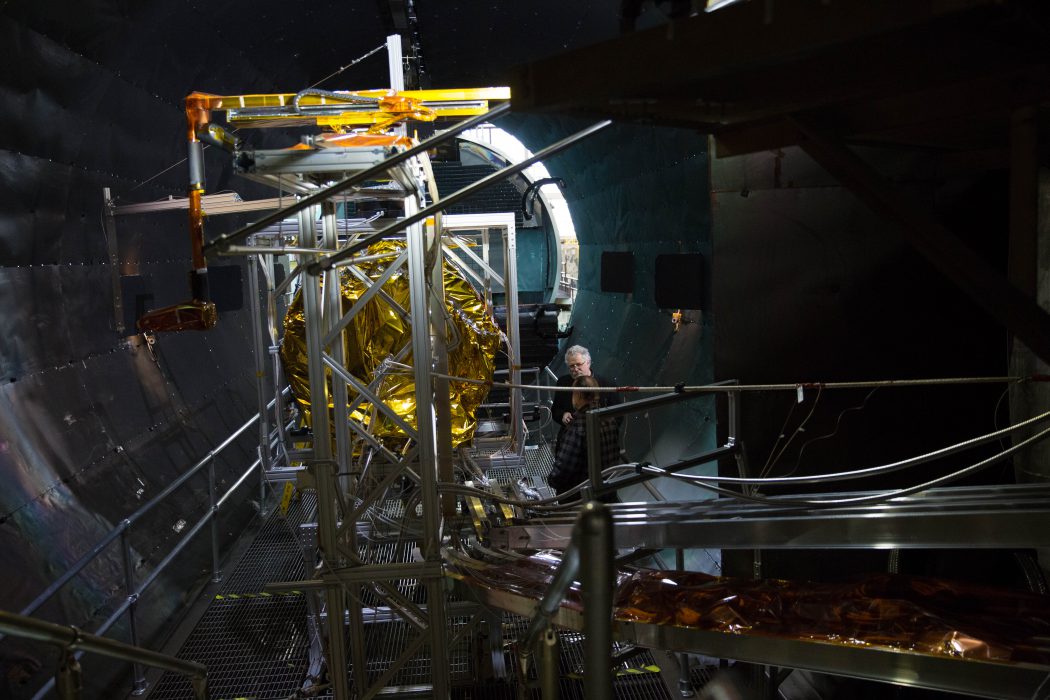 A FORMER WABASH PHYSICS MAJOR HAS BEEN DESIGNING, BUILDING, AND TESTING THE ROCKET ENGINES THAT WILL TAKE US TO NEW WORLDS, AND MAY EVEN SAVE OUR OWN.

The fastest rocket engine for deep space missions has no moving parts.

As the ion thruster throttles through the solar system at speeds of up to 200,000 mph, there will be no white exhaust plume, but a blue streak of light.

The solar-powered engine was developed by NASA not in the sunny space centers of Florida, California, or Texas, but in Cleveland.

And the guy who designed and helped build, test, and prepare the ion thruster for its first mission also led the team that set the record with it for the longest continuous operation of a rocket engine. He’s currently testing the most recent model for a NASA mission to protect the earth from asteroids.

Patterson’s earthly ride is more humble—an older red Toyota Corolla. He picks us up at the main gate of NASA’s Glenn Research Center in Cleveland wearing jeans, a dark-striped western shirt, and a bolo tie with a likeness of the “End of the Trail” warrior on horseback sculpture on it. There’s a black cowboy hat in the Corolla’s trunk as we load our camera equipment on this frigid late winter day. The cracked Wabash license plate frame clatters when he closes the lid.

Patterson has spent most of February 2019 at The Aerospace Corporation in El Segundo, California, testing the latest ion thruster for DART (Double Asteroid Redirection Test). A mission backed by NASA’s Planetary Defense Coordination Office, it will launch in 2021 to test a method of changing an asteroid’s course by slightly altering its speed. Wherever Patterson is working, government travel regulations require him to return to Glenn at least one day per month, and we’ve lucked out—today is the day.

As we drive past the landmark hangar and wind tunnels toward his office and the Electric Propulsion Lab in Building 301, Patterson recalls his internship at Glenn in 1981 between his junior and senior years at Wabash. That’s when he met Dave Byers, a leading expert on ion propulsion, who would become his mentor and who had worked with Harold Kaufman, builder of the first successful ion-propulsion engine.

“On my first day I was working with some of the guys who worked for Dave, and within 10 minutes, I was running an ion thruster,” says Patterson, his voice getting louder as he remembers the moment. “This guy told me, ‘I’m going for a coffee break—you let me know what’s going on.’ There was a panel of analog meters and power supplies in front of me. Then another guy wandered by and said, ‘Hmm, that doesn’t look right.’ I had no idea what I was doing, and I was a little overwhelmed the first few weeks.

When Patterson returned to Glenn for good in 1985, that same learn-by-experimentation philosophy prevailed.

“The nice thing about working at NASA when I got here was this: You got in the lab, and if you weren’t breaking something, they figured you weren’t learning. So we were in there constantly, testing something, seeing how it worked, trying to improve it.”

DEEP SPACE 1
Patterson’s office looks like he doesn’t spend much time here. On top of one of the filing cabinets is an original ion thruster created by Kaufman in 1958, looking a lot like a stainless steel button accordion with a lot more holes. On the desk there’s a key to Patterson’s hometown of Kendallville, a souvenir from the day the mayor proclaimed “Mike Patterson Day.” There are signed photographs from astronauts and a white board covered with equations. Awards and citations line the floor and every surface but his desk; there’s no more room on the walls for the 11 patents he’s been issued and the more than a dozen honors he has received.

We notice some stones on his desk: “Moon rocks?”

He leads us down a hallway that can’t have changed since the 1970s and into the Electric Propulsion Lab. We enter one of the large vacuum chambers being prepped to test one of the NASA Evolutionary Xenon Thrusters (NEXT) for the DART mission. The record for longest continuous operation of a rocket engine (five years, six months) was set in one of these chambers. The NSTAR ion thrusters for the Dawn and Deep Space 1 missions were tested here.

“A lot of my success is due to luck and timing,” Patterson insists. “I came on in 1985 and it had been nearly a decade since NASA could hire anyone, so all the other guys were 15 to 20 years older than me. So they put me in charge and I went into a lab and banged away for a couple of years to get the [NSTAR] engine developed. I was fortunate to have Deep Space 1 come along and to be responsible for the thruster and its first real test in space.”

Deep Space 1 was the first NASA operational mission to use ion propulsion rather than the traditional chemical-powered rockets.

“Oh man, we were scrambling to get it done and ready for that mission,” Patterson recalls. “From the time we finished the last iteration of the thruster to the time we flew was less than four years. That’s lightning quick for the development of hardware and validation.”

Deep Space 1 was successfully launched into Earth orbit by a Delta II rocket on October 24, 1998, but there was a heart-stopping moment for Patterson as the spacecraft was slipping away from Earth and the ion engine was switched on to complete the flight.

“Four minutes after turning the engine on, we had a short, a glitch.” Patterson says. “I was pretty depressed. I saw my future vaporizing.

“A tiny piece of debris had caused the engine to go into recycle mode,” Patterson explains, remembering the nervous hours he spent at his desk in Cleveland watching the engine readouts on the Internet. Controllers at the Jet Propulsion Lab in Pasadena took a conservative approach, spending weeks to shake off the metal debris.

When they finally turned the engine back on, it worked perfectly. The spacecraft flew by an asteroid and took detailed photos of a comet, a triumph that set the stage for ion propulsion to be used in many of the most important missions in the near future.

“If I had thought of it, I would have scratched my name on that one.”’ Patterson laughs.

“SO MUCH FARTHER TO GO”
He drives us to Building 16, where a collection of ion thrusters provide a timeline for Glenn’s—and much of Patterson’s—work on ion propulsion. Patterson knows most of these engines well.

“What I like about this work is you come up with an idea, put it on a piece of paper, you get to build the hardware, you test it, and see it fly.”

A similar process drew him into rocketry as a boy in Kendallville.

“In the third grade I was spending all my time making elaborate drawings of Robert Goddard’s first liquid fuel rocket and of Gemini and Mercury spacecraft,” he recalls. “So my dad and I went downtown to the hobby store and bought a kit with a launchpad. The first rocket I built was an Estes Alpha III.”

They launched the rockets from his aunt’s and uncle’s land outside Kendallville. Eventually he upgraded to larger rockets, more powerful engines.

“We didn’t get many back.” He smiles.

I ask if he has any favorite moments from his 34 years at NASA. Having seen all the accolades in his office, I assume he has plenty to choose from.

“I’m not sure I have any,” he says. “I tend to think more often of my failures.

“When a couple of guys and I got the government invention of the year award for the system that controls the charging on the international space station—well, they say that saved the space station, so we did something from concept to flight that was critical on a human spacecraft. That was a good moment.

“But some of this technology has gone through such a protracted gestation period that it’s almost embarrassing. Our young guys are working on applications of technology that some guy designed before them, but they should be the ones working in the lab and coming up with the new technology, getting the opportunity that I got. A lot of what we’re doing is polishing old hardware, when we should really be pushing the limits.

“Our customers shouldn’t be telling us what they need; we should be telling them what we can do.”

Patterson speaks hopefully even as he describes his frustration.

“We’re still in the biplane stage of this technology—there’s so much farther to go.”

Then he stops at an unfinished thruster—essentially a deep bowl with a large center post, unlike anything else in the room—and smiles.

“We could be using ion thrusters in ways that they have never been used before,” he says.

A half-hour later we’re at the NASA gift store checking out souvenirs, discussing the oddities of bureaucracies and government travel regulations. Like the speed of the ion thrusters he builds, a conversation with Patterson slowly builds in intensity. The crescendo to this one comes from out of the blue.

“You know, you asked about favorite moments,” he says. “Not long ago I was reading about something way outside the envelope that the Department of Defense wanted. I couldn’t help thinking, How would I do that? How would I build something that performs like what they’re asking for? And at first I’m thinking, That’s impossible, then, Ah, maybe, and I started sketching stuff out. That’s when I came up with the annular concept.

“I told my old boss, Dave Byers, about it, and he thought it was great. I talked about it with John Foster, one of the guys who used to work here. The longer we look at it, the better it gets. We’re going to go out to Aerospace and test it sometime soon.

“Conceiving something, building the hardware, testing it, then seeing it fly—that keeps me in this. Those are the moments….”