He’s the man you see when you’ve just lost a shot at half-million dollars and been voted off one of TV’s top-rated reality shows. Cam Montgomery ’86 is perfect for the job.

Cam Montgomery’s welcome is as warm as this August day in Studio City, CA.

Trim and fit at age 52 and wearing jeans, sneakers, and a T-shirt, he leads us down Gunsmoke Avenue and into CBS Soundstage 18 and onto the Big Brother set for our behind-the-scenes tour. We sit in a few of the 76 folding chairs where a studio audience will soon watch host and Emmy Award winner Julie Chen interview the latest person evicted by fellow “houseguests.” The “house” is about 30 feet away from us behind an icy blue and metal façade and a phalanx of large TV screens.

“It’s LA.” Montgomery smiles. “Nothing is as it seems.”

We check out Chen’s dressing room and visit the control room where a cadre of young men and women monitor 87 cameras and more than 100 microphones hidden in every nook and cranny of the house. We watch the crew build sets in the “backyard” for that afternoon’s competitions. 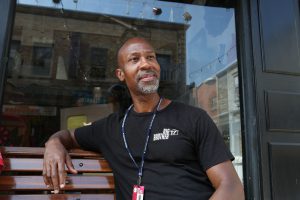 But Montgomery can’t show us the place he does his most important work.

As cast sequester manager, he makes sure that none of the show’s 16 contestants have contact with the outside world during Big Brother’s99-day run. He’s also in charge of the “jury house,” a real home a few miles away from the studio where the last nine evictees live until the show ends. Montgomery takes care of them after they have lost their shot at the $500,000 prize and the moment of fame that comes with it.

“I’m everyone’s consolation prize.” Montgomery laughs. “Often they’re bitter, because a person they trusted kicked them out, but I tell them that only one person can win the grand prize. The universe has everyone else here for a different reason. We have to figure out what that reason is for them.”

“I tell them this is a wonderful opportunity; you have to search within yourself to find it. For some, its meeting the person they’ll marry or the mother of their child. You thought you were here for $500,000, but you were really here for something else.

“That’s life in a nutshell.”

It certainly has been for Montgomery. 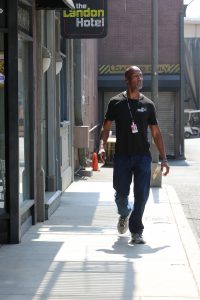 He moved to Los Angeles in 2000 to reinvent himself as a sitcom writer. A gig as a talent manager fell into his lap. The job at Big Brotheropened up when the previous sequester manager, a friend he had worked with, recommended him.

“I look at the comments on websites where my work appears, and people identify—they feel like I’ve written about them. And we really are all the same—we all want to love, and be loved in return.”
Montgomery revels in his role at Big Brother.

“I have never met a stranger in my life, so I’m a perfect fit for this show,” he says. “I feel like the cast is my brother, my sister, my son, my daughter. I try to treat people the way I want to be treated. Doing this work, to me, is like spreading love.”

What Matters Most?
“I volunteer at a residence for elderly people. They’ve shown me that you have to do something you like or you’ll wake up resentful some day. So now I do the things I like. If they make a lot of money, great. If not, great. Success for me? it’s being able to use the bathroom by myself on a consistent basis! Everything else is a cake walk!”