It’s not normal for a baby to be blue.

Yet there she was—a tiny patient tangled in tubes lying on an operating table.

Parts of her body weren’t receiving enough oxygen. The scientific term is “cyanotic.”

Standing above her, in a pediatric hospital in Guayaquil, Ecuador, was renowned cardiac surgeon Dr. Jack Myers ’74.

Watching the entire time were Joey Lenkey ’19 and Joey Ballard ’20, in the first surgery of what would be their weeklong trip with Myers. Then they followed the baby girl to the ICU.

Their work was just beginning. So was Lea’s.

“She wasn’t doing well at first and was on so many different medications in the ICU,” Ballard remembers.

“Then we saw her wake up one day,” Lenkey says. “She started moving around more. By the end of the week, she looked like a baby you could pick up and play with!” 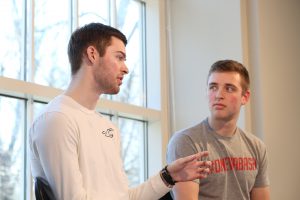 Ballard and Lenkey recall their Spring Break in Ecuador with Dr. Jack Myers ’74

Ballard and Lenkey spent their Spring Break eating, working, and even sleeping in the Ecuadorian hospital.

“I think that was something that made the trip even better than normal shadowing experiences,” Ballard says. “We got to see the patients starting on Monday and follow up with them throughout the week in the ICU. We got to see how much more is involved beyond the operating room.”

Myers is a pediatric cardiothoracic surgeon who established an award-winning congenital heart surgery program at Hospital de Niños Dr. Roberto Gilbert E. in Guayaquil. For 21 years he has led teams of health care professionals on two-week missions to train surgeons and perform life-saving procedures on children. The hospital tries to save the longest and riskiest procedures for his annual visits so children like Lea have a better chance of surviving.

His visit this year lined up with Wabash’s Spring Break, so he took “the Joeys.”

Brothers of Phi Gamma Delta, Lenkey and Ballard had lived in the same house for two years, but sharing a hospital room was different. By the end of the week, the two could communicate with one look above their surgical masks.

However, they had mixed feelings about where they were staying. Only private-paying patients had a room on the second floor of the hospital. There their families could stay with them.

“We were staying in a room, in the hospital, on that second floor,” Ballard says.

Families who couldn’t afford the second floor for their child slept on blankets outside.

“Parents love their kids more than anything and, as a doctor, you can’t show any less than that care because that’s what the parents are expecting. You’ve got to match it.”

“One of the doctors told us that, if you’re a doctor in Ecuador, it’s for the patient,” Ballard says. “You’re not doing it for the money, because the money’s not there.”

“There are going to be times when you can’t see your own family for a long period of time, and you’re going to get fed up with it if you’re doing it for the money,” Lenkey adds. “But if you’re seeing the impact you are having and making connections with the patients…that’s what made it fun for me to wake up the next morning and do it all again.”

The students witnessed the life-or-death moments surgeons face every day and what happens when the mood in the operating room shifts.

“You could feel it. I don’t want to say it went south, but it wasn’t going as planned,” Lenkey says, remembering one particular surgery that week. “Maybe nothing was said, but you could feel a different sense of urgency.

“They were starting to close the patient up. One of the doctors had already left to tell the parents everything was all right, and then the patient kept bleeding out of the nose where he was intubated.

“At first, they were just wiping it and it seemed normal. The next thing you know, they were ordering a pint of blood. Then one turned to two, five, and I think 12 by the end of it.”

“I was freaking out,” Ballard says. “I was thinking, they already talked to his parents. What’s going to happen now?

“A lot of times you don’t see when things go wrong when you’re shadowing. But it’s a part of medicine. To get just a glimpse of that was important—to see the mindset you have to have as a surgeon.”

Later, they talked to Myers about what happened.

“We spent every waking moment with him,” Lenkey says. “We would be at breakfast and then we’d think of a question from four days ago. It was like, ‘Sorry to interrupt this conversation, but I’ve really got to know this one thing.’”

“Dr. Myers told us how much he appreciates being able to do the work he does,” Ballard says. “It made me say I want to do something like this.”

“One day when we were wearing our scrubs, a little girl we hadn’t even interacted with was getting wheeled out,” Lenkey recalls. “She was so happy, and she waved at us! I’m just like, I didn’t help you, but I feel so good because you think I did! That’s what I look forward to.”

Another little girl was still recovering in the ICU, playing Peekaboo with her dad.

“That moment really drove the whole experience home,” he says. “That’s what medicine is all about. You want these kids to get better so they can play with their families. It was a really nice way to end the week, knowing these kids are now going to be able to do just that.”

“Everything Good and Noble”

Jack Myers is Professor of Surgery and Pediatrics and Chief of Pediatric and Congenital Heart Surgery at Penn State’s Hershey Children’s Hospital.

Yet he never received an undergraduate diploma.

After the death of his father, Myers’ family faced difficult financial circumstances, and his mother needed helped raising his younger siblings. So he left the College a year early. His sacrifice made it possible for his younger brother, Bill, to attend Wabash less than a decade later.

“He talked about his family to us all the time,” Joey Lenkey ’19 says. “He loves his family. He loves his patients. I think he loved us too.

“He wants to make everyone else better. For the first 15 years in Ecuador, he brought his own team, until the hospital started having doctors who were able to do some of it. He comes back to teach them, and it makes it more viable for the long term.”

Myers finally got his Wabash sheepskin in May 2017, when President Greg Hess conferred upon him the degree of Doctor of Humane Letters saying, “You exemplify everything good and noble about a Wabash College graduate. I am honored to present you with the degree you so richly deserve.”