“When you’ve got somebody looking out for you that much, you’ve got to pay them back. You do the best you can with every opportunity you get.”
—Marlon Lewis ’20

When Marlon Lewis ’20 walked into Chicago’s Museum of Science and Industry (MSI) on the first day of his internship last summer, the place felt a lot like home.

In some ways, it was.

Growing up in Chicago, Lewis and his family went to the museum at least 10 times a year on free admission days.

But it took some phone calls from Wabash to make his internship a reality.

As a member of the Wabash Liberal Arts Immersion Program (WLAIP), Lewis was guaranteed an internship between his freshman and sophomore year. He knew MSI was where he wanted to go, but he was struggling to get information about internships there.

“I mentioned this to Dean Jones about two months before school was out, and he called a woman he knows who works at the Muhammad Ali Childhood [Home] Museum in Kentucky,” Marlon recalls. “I know—it’s crazy that he reached out to Kentucky to get somebody in Chicago, but it worked. She gave us some information, and I reached out to MSI.”

“I let Dean Jones know that, and he, [Career Development Director] Jacob Pactor ’04 and [Center for Innovation, Business, and Entrepreneurship Director] Roland Morin got right on it and made phone calls.” 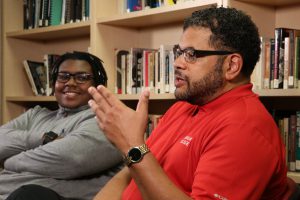 “It was a great example of how teamwork can make things happen,” Jones says. “I could see the desire in Marlon’s eyes to work at MSI, to work in Chicago to be close to family, and I know how important that is.”

Lewis’ liberal arts experience helped him get the internship, too. His supervisor, Sarah Ingraham, said it is often difficult to find students who have an eye for design, who are able to conduct quality scientific research, and can talk with people easily.

“My love of science drove me to really want to be at MSI,” Lewis says. “I’ve been able to talk and have interactions with people and write reports. I’ve been able to express my creativity. That’s why I was really striving to be there.”

Once he arrived, he was determined to excel.

“I think every person at Wabash wants you to succeed,” he says. “When you’ve got somebody looking out for you that much, working that hard, you’ve got to pay them back. You do the best you can with every opportunity you get.”