The “W” Factor: A “True Education”

You’re going to struggle here. It’s just part of the process. But whenever I’m struggling I know I can go to Professor O and talk to him. Being able to reach out is an amazing factor of Wabash.
—Kirby Cox ’18 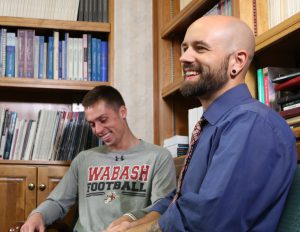 Kirby Cox and Alexis Arellano experienced this in their own classes with him.

So when Olofson asked them to work with him on summer research developing new ways to measure fathers’ parenting styles, they knew it would be difficult. What they didn’t know was how well they would get to know their professor outside of the lab and the classroom.

They didn’t work together this summer; they did life together.
Kirby: When you talk to friends at other schools and you ask, “How well do you know your professor?” They say, “Oh, I just know him in the classroom.” I say, “Well, we were at his house swimming in his pool all summer.”

Eric: And my kids. My kids still ask, “When can Kirby and Alexis come over?”

Alexis: It was nice to be able to go to the lab, take things seriously, and just get into working mode.

Alexis: Then as soon as we were outside the lab, we were able to just talk about everything. I know Dr. O and his wife helped us a lot with just future goals that we had.

Eric: We cooked breakfast for them. I roast my own coffee. They tried some of my coffee. Carrie, my wife, and I were even talking them about saving for retirement. What does it mean to make good financial decisions?

And we’d play Frisbee, and we worked out together,

Kirby [laughs]: Working out with Professor O and Alexis over the summer…what’s the word I’m looking for…

Alexis:   I would consider all three of us pretty competitive.

Eric: I might sandbag a few reps, and then when Kirby thinks that he’s done, I’d kick it back up again, and he’d see me still going. I probably wasn’t going the whole time, but he sees me, and he’s like, “Oh, man, I got to pull out another 30 seconds of this plank.” [laughs]

Kirby is quiet but intense. I saw that more in the weight room. He’s not nearly as boisterous or talkative as I am, but when the challenge came, he was just dialed in. It was serious.
Kirby:  All business.

Eric: Alexis is hardworking, but a little bit more carefree.

Alexis: Playing Ultimate Frisbee, we would be going all out. Sometimes it was not just a friendly game! I got tackled on Ultimate Frisbee by Kirby a couple times. [laughs]

Eric: The only reason a Seattle boy came to rural Indiana is for this kind of opportunity. I saw that when I first came. The students were asking such good questions.

It’s what I knew that I always wanted to do. A true education. And a life‑transforming education—not just learning stuff, but being educated in ways that cause you to think differently—requires a relationship.

The students can really see that, as professors, we care about them beyond the classroom. We want to do something that’s going to benefit you 20 years down the road. I might not even see you again; I just want to know that you’re doing well.