Ten minutes before the end of his last class before retirement, Professor Bob Foote was teaching a bunch of non-math majors about spherical geometry.

Using two Hot Wheels cars on a globe he demonstrated—to the audible amazement of several students—that there are no parallel lines on a sphere. All lines eventually intersect, no matter how close together they may be. 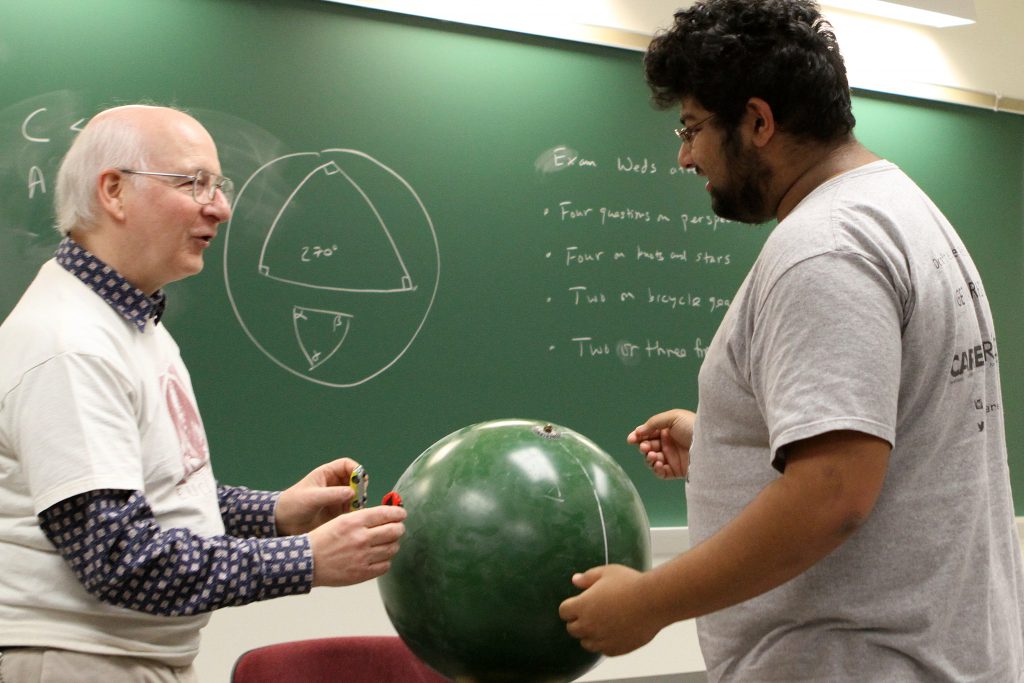 Talking spherical geometry with Richie Abedin ’17 on final day of class: “One my warmest memories of teaching.”

Senior Richie Abedin was having none of it.

So Bob welcomed him to the front of the class, where Richie moved the toy cars around the globe to respectfully but passionately argue his point, to the delight of his teacher.

“I love the one-on-one part of teaching,” Foote would say a few minutes later when his fellow profs and students crowded into the hallway in Goodrich Hall for a surprise reception marking his nearly 30 years at Wabash.

Richie’s challenge and attempt to demonstrate his point “may be one of my warmest memories of teaching,” Bob told us the next day. The back-and-forth between student and teacher was the perfect exclamation point to Bob’s time in the classroom.

The next week, WM celebrated Bob’s three decades of teaching with a photo shoot of some of the more fascinating artifacts in his office.

Associate Professor of Mathematics Will Turner paid tribute with a proclamation read at the final faculty meeting of the year, including the following:

Robert Foote has taught over 25 different courses at Wabash College running the gamut from pre-calculus and geometry for liberal arts majors to our senior seminar, methods of teaching mathematics, and special topics courses on computational geometry and computer vision.

Not only has he taught calculus innumerable times, but he wrote the book.  Literally.  We have used his book A Brief Introduction to Multivariate Calculus to introduce the subject in our second-semester calculus course for decades.

Bob has also been a staunch advocate for technology in the classroom.  He was a co-principal investigator on the grant that created the first computer classroom at Wabash.

Matt Shultz ’06 says, “Watching his eyes light up and hearing him exclaim ‘elegant’ and ‘beautiful’ as he went through the proof was pretty amazing.”

Han Nie ’16 writes: “I was deeply moved by his genuine fondness for mathematics when I took his Calculus II class during my freshman year. During one class near the end of the proof he was presenting, he took a step back and double-checked the whole process. Then, he chuckled, and was beaming with happiness and satisfaction.”

“Hearing him discuss spherical geometry was like attending a poetry reading,” Seth Tichenor ’10 says. Seth further credits Bob for instilling in him “a pursuit of truth” he still follows.

David Coddens ’08 says Bob’s geometry class had a holistic approach that put the responsibility on the students to present proofs, and he credits it as one of the reasons he enjoys teaching geometry so much today. Josue Gutierrez ’11 recalls how positive Bob was and how he encouraged him to follow his dreams and earn a Masters in Acting. Cam Stewart ’15 says he would not have majored in mathematics without Bob’s intervention: “Dr. Foote went above and beyond and this set the foundation for my future success at Wabash.”

Former chair of the Mathematics Department J.D. Phillips added these words: “The department that Bob is retiring from is an excellent one—one of the best math and computer science departments in the country. And one of the chief reasons for this excellence is its culture of hard work and seriousness of purpose. I know of no one more responsible for this culture than Bob Foote.”

—Will Turner, Associate Professor of Mathematics