A Wabash Man, A Family Man

When Professor Jennifer Abbott spoke about Delon Pettiford ’17 at the Senior Rhetoric Dinner last spring, she said she will always remember how special he was. Contrary to many people on campus, though, Abbott won’t recall Pettiford for his accomplishments on the football field, but because, as she said, he’s “a family man.”

A native of Indianapolis, there is nothing more important to Pettiford than family. He and his two younger brothers have always been close, but their relationship changed once his parents divorced.

“When my dad no longer lived in the house, my mom felt that there were some things that were awkward to talk to my brothers about growing up, so I would step in and fill that role,” Pettiford says. “She would always tell me I didn’t have to and I shouldn’t have to. But I still sort of feel like it’s necessary.”

Even as a high school student, Pettiford would switch between being the fun brother who would wrestle with his younger siblings when mom wasn’t home to being more of a father figure who would get on his brothers when he needed to.

“I’m like their best friend, but, at the same time, if they’re getting smart with my mom, I’ll yell at them,” he says. “We’ll go back and forth with that relationship because they’ll tell me that I’m not their dad and I can’t tell them what to do. And sometimes they’ll listen.”

It would have been easy for Pettiford to leave that all behind once he got to Wabash (which he chose partially because of how close it was to home). He now had time to focus only on himself—his athletic career, his academic career, and his social life. But he could not stand to be away from home.

“It was really bad the first couple of years here,” he says. “It was my first time being away from my brothers for more than a week. When I was a freshman and sophomore, I went home at least two to three times a week. And, yeah, it was only an hour drive, but those were hours I probably should’ve been studying. But I’ve never regretted what I’ve done.”

He’s driven home to as many of his brothers’ sporting events that he could get to. Not a birthday or a Christmas goes by without Pettiford spoiling his younger brothers. And even throughout his senior year, he would still drive home to see his family at least once a week.

Going to college, though, might just be the best thing Pettiford could have done for his younger brothers. 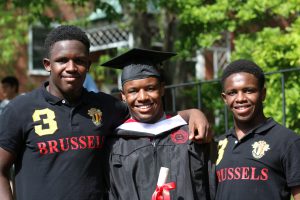 Delon with his brothers at his Wabash Commencement in May: “I’ve just shown them the path to take.”

“I didn’t really know anything about college until my sophomore year of high school,” Pettiford says. “I realized I actually might be able to go, but the only reason at that point was to play football in college. In high school, I’ll be honest, I loved to party. I ended up getting good enough grades to get into Wabash, but I could’ve done a lot better, so I try to teach them to be better than what I was.”

Pettiford’s brothers often came to campus to hang out with him and his friends and teammates. The middle brother would watch the football team at practice, and the younger brother followed all of the Wabash wrestlers and is, as Pettiford puts it, obsessed with Riley Lefever.

Pettiford takes a lot of pride mentoring his younger brothers – and even their friends. For some of them, he’s the only person who has made it college and has succeeded both athletically and academically.

“I’m the first person in my family to go to college, and then to make it to Wabash was pretty cool,” Pettiford says. “I’m from the eastside of Indianapolis, which isn’t that great of an area. A lot of my friends didn’t have good enough grades to go to college. Some of them spent time in jail. Some of them actually died. So obviously, I did this for myself, but I think I’m also setting the bar for them by showing them that you can go to the next level of your education and you can graduate. And I think they’ll do a lot more than I’ve done. I’ve just shown them the path to take.”