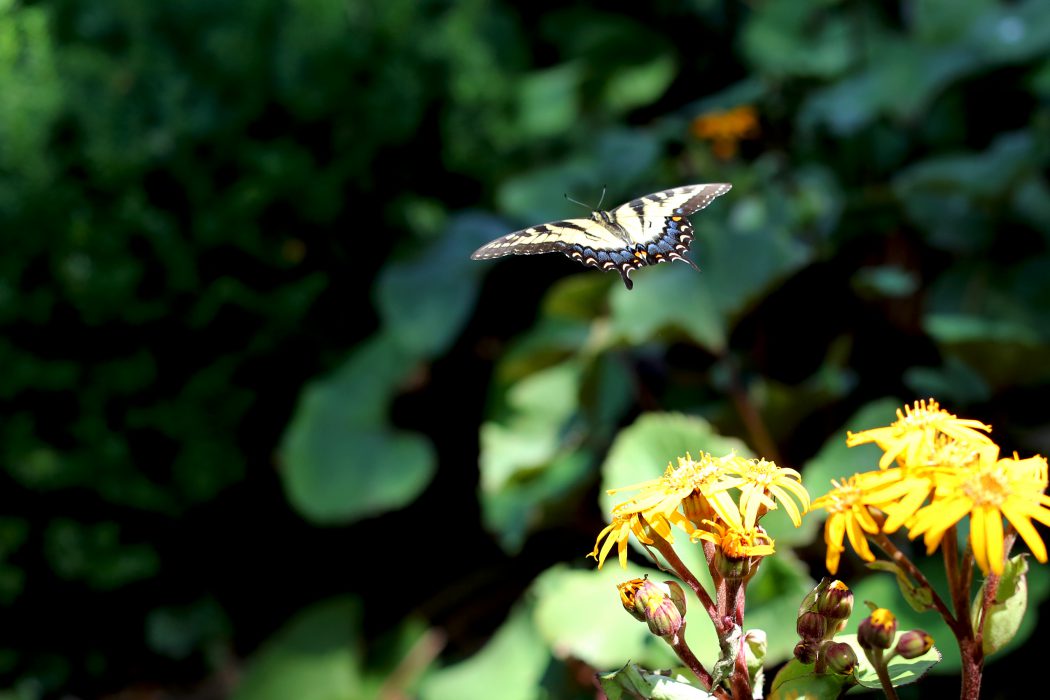 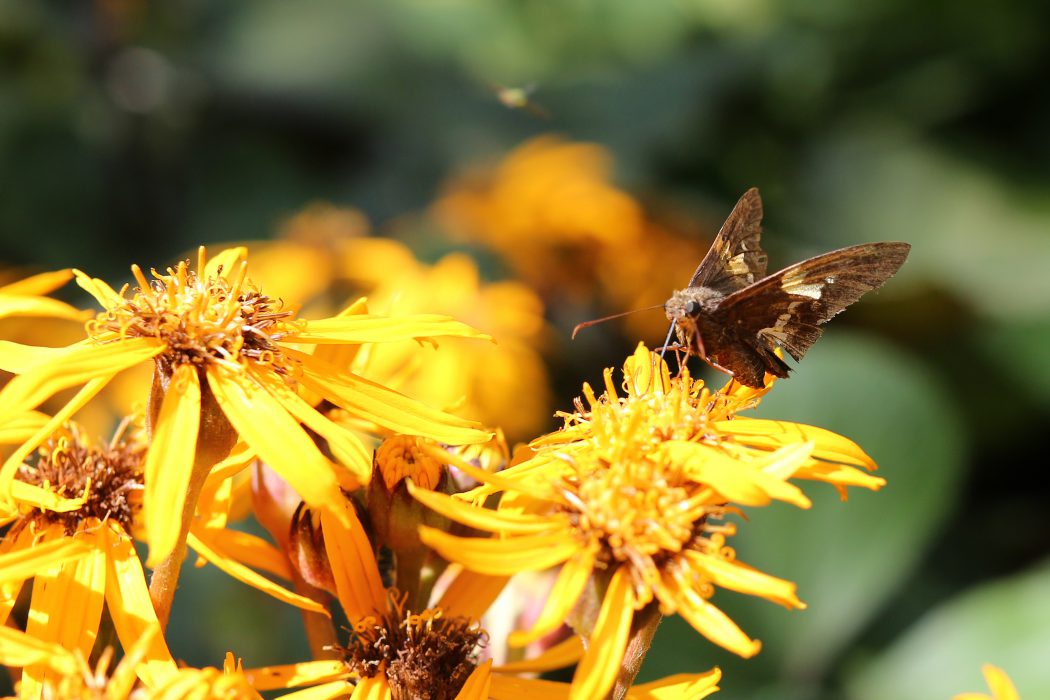 Sphinx moth on a ligularia flower 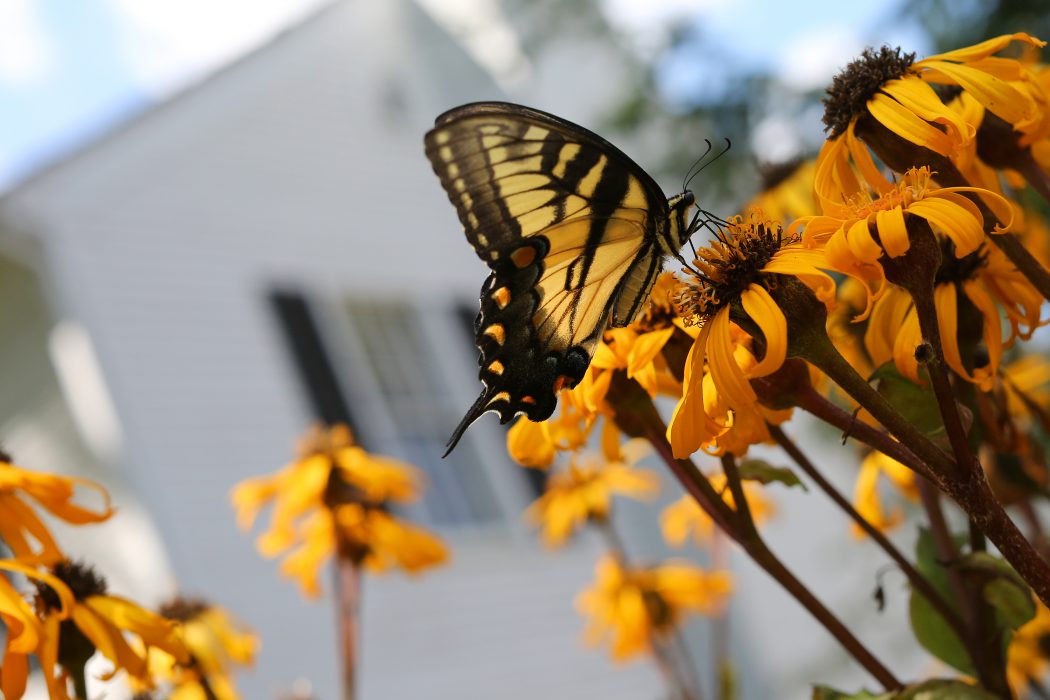 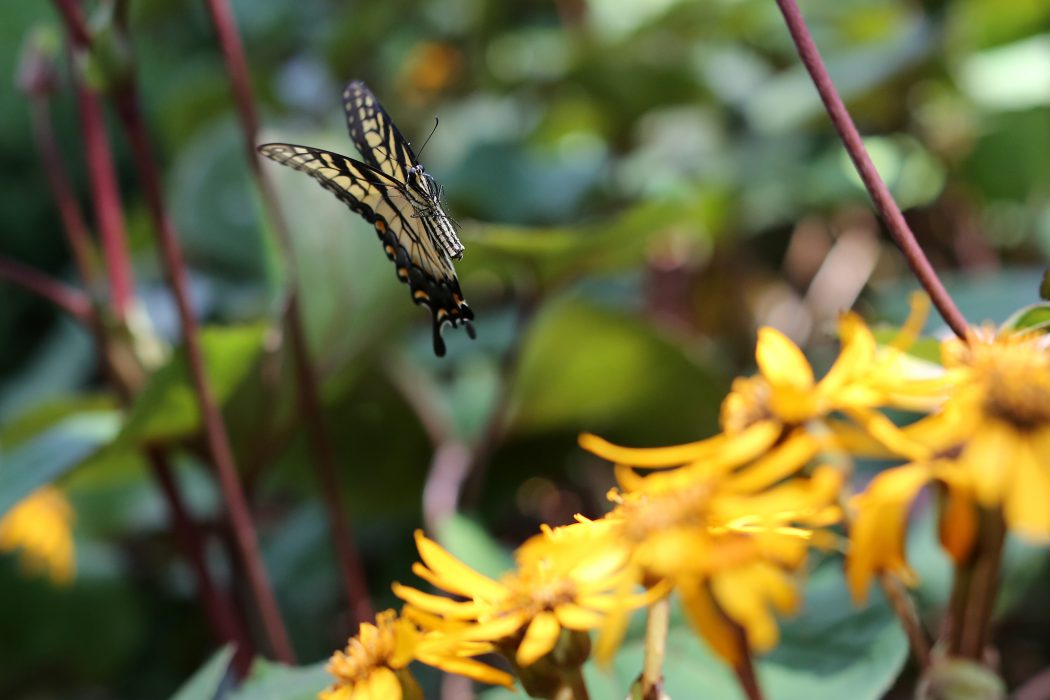 A swallowtail leaps into the air with a single beat of its wings. 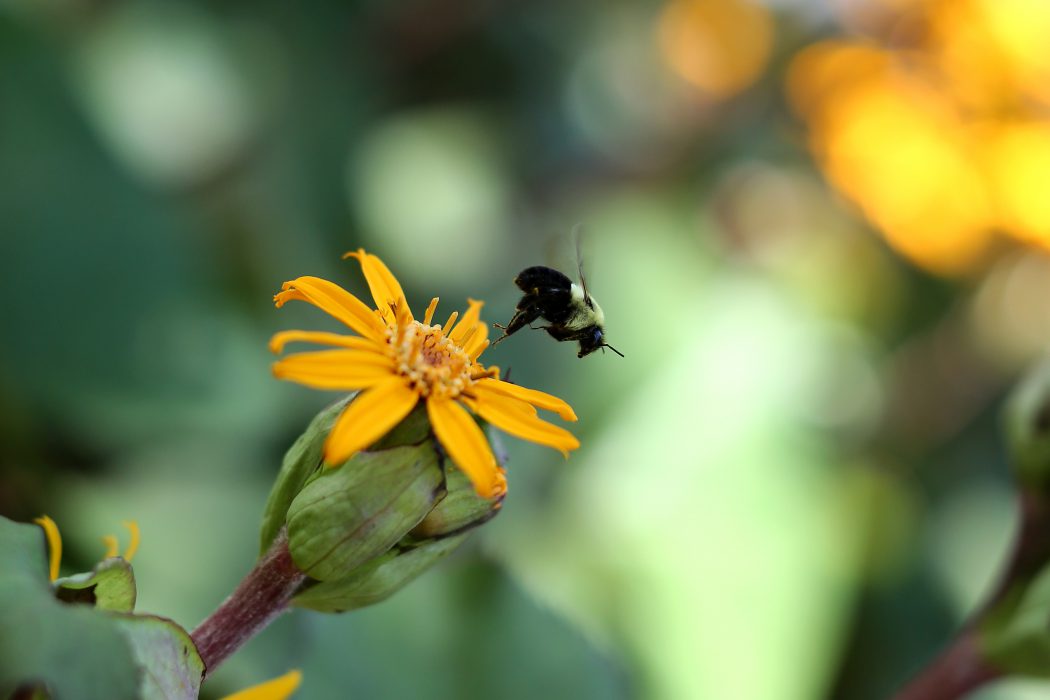 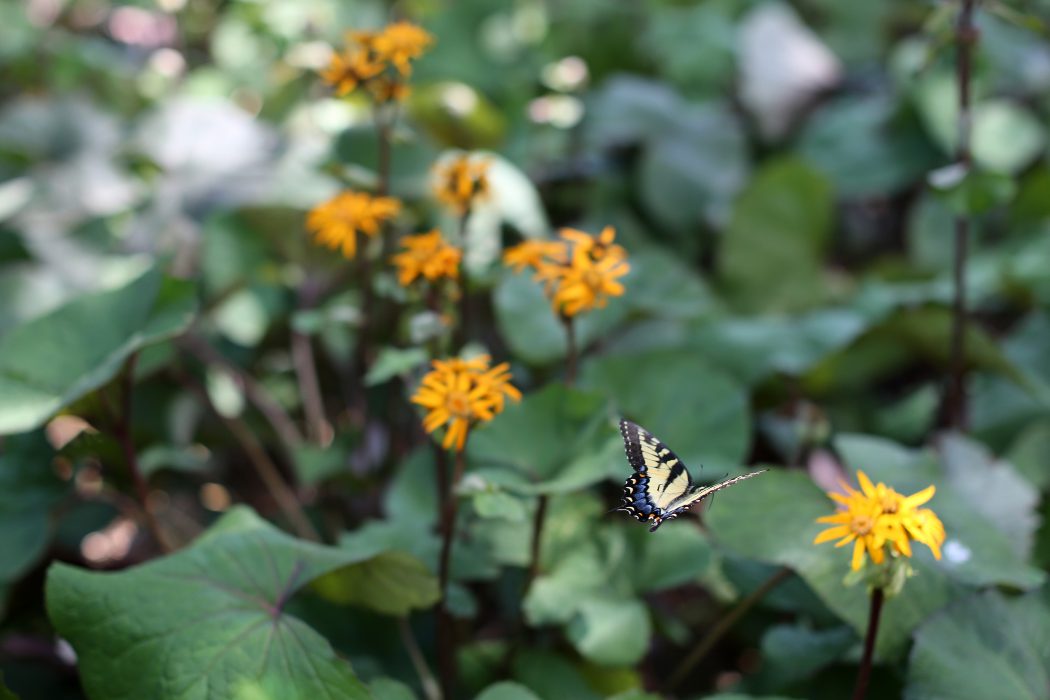 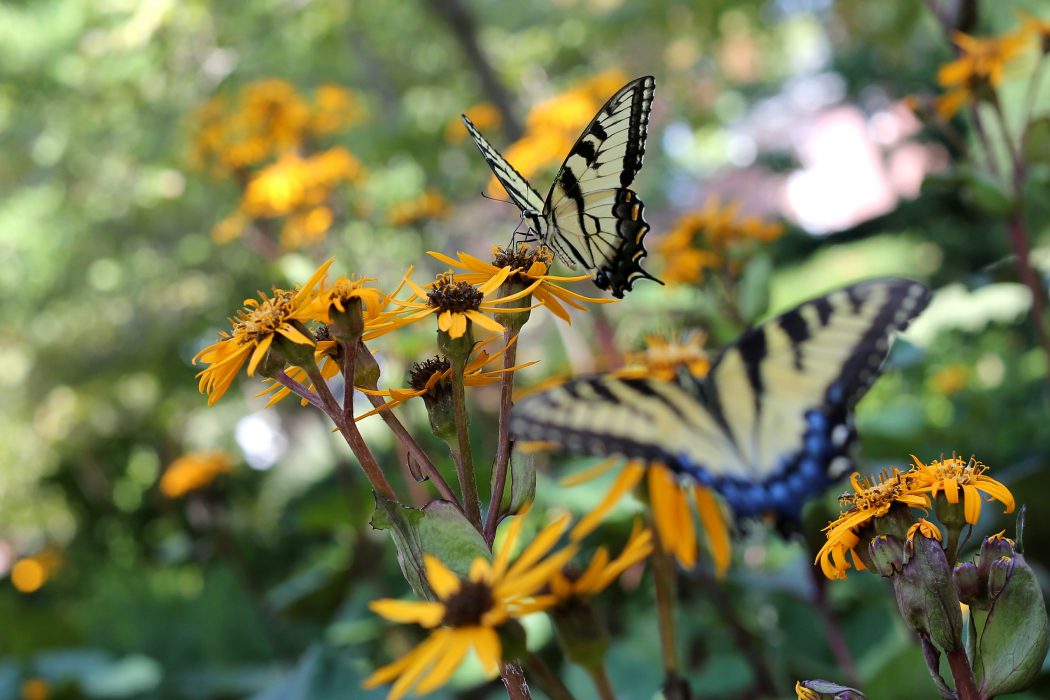 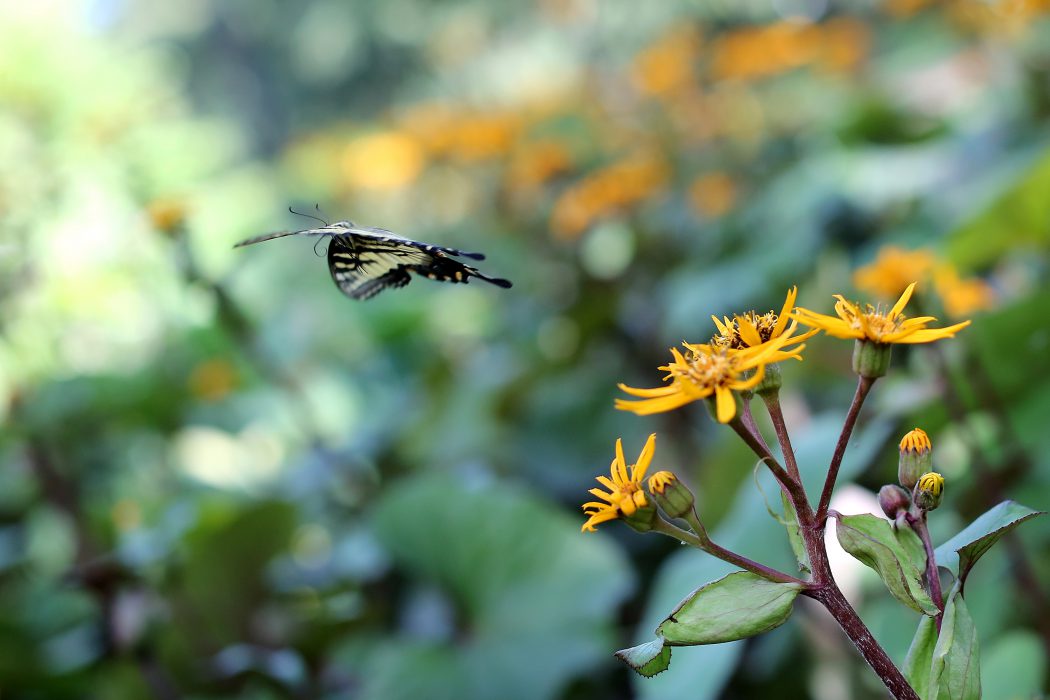 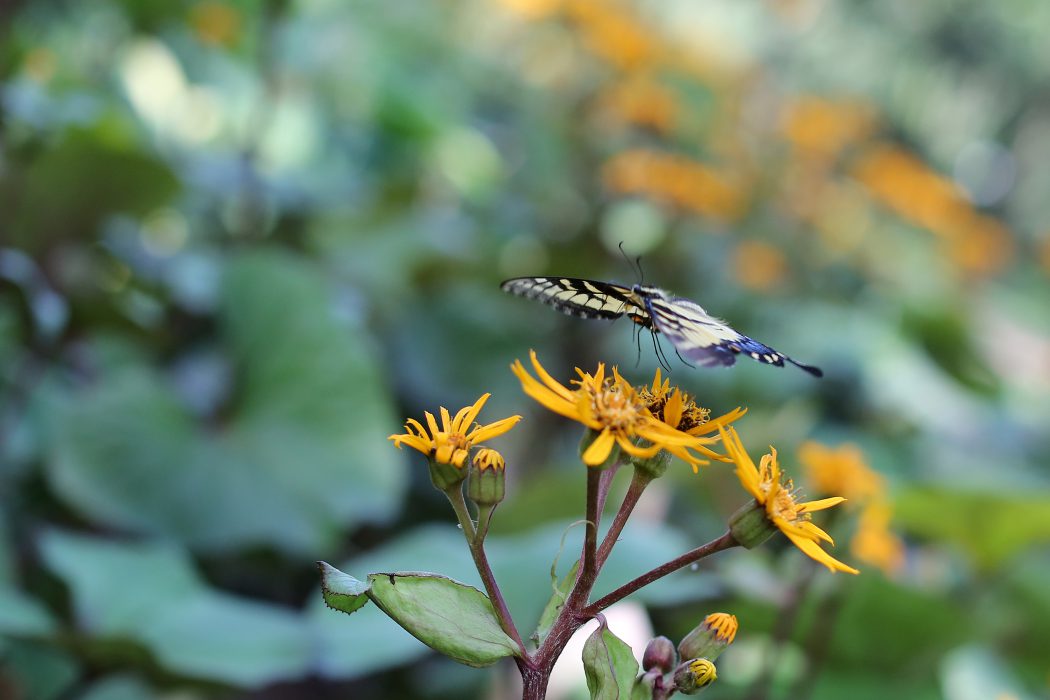 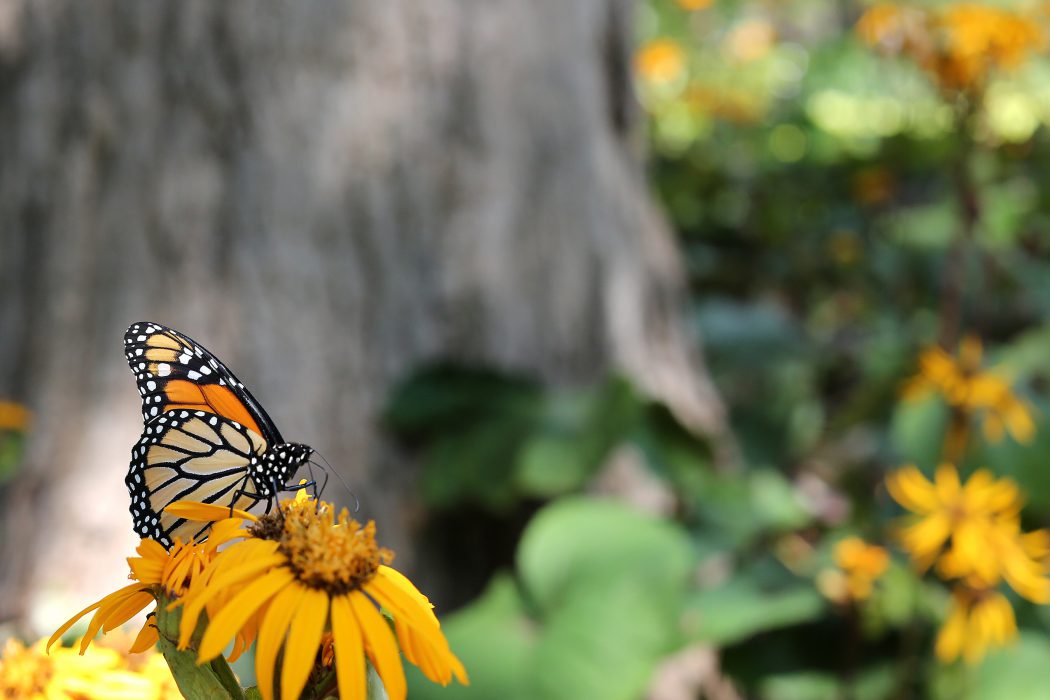 A monarch rests on a ligularia flower. 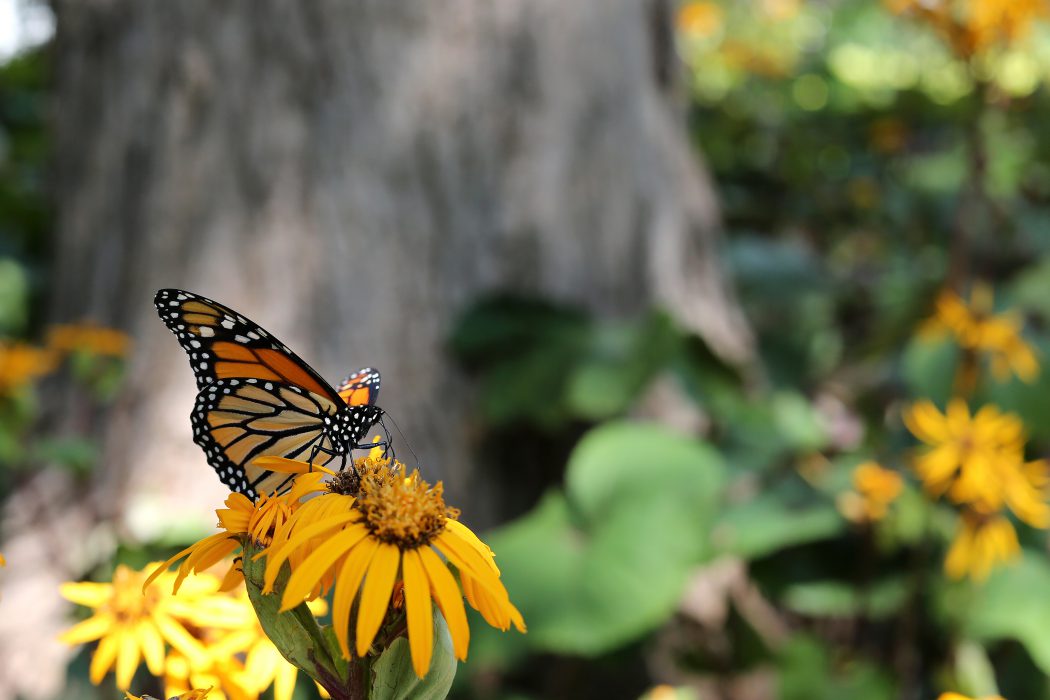 A monarch rests on a ligularia flower.

Take three weeks off work for the first time in 37 years and you come back seeing things differently.

Some more intensely, some for the first time.

I’d noticed for many years the butterflies lured to the ligularia that Grounds Manager Tim Riley planted in front of the Caleb Mills House in 2000. But I’d never seen the whole garden stir to life in mid-August when that kaleidoscope arrived en masse—the ripples of yellow, orange, black, and blue as swallowtails, monarch, coppers, sphinx moths, and bumblebees flit and float between the flowers.

The wonder is as much in the motion as in the vivid colors, so I decided to spend my lunch hour my first day back from vacation chasing it all over the garden with the office’s new Canon 5D and a 50mm 1.2 lens. I wasn’t having much luck until I stopped to talk to a friend. When I turned back there were four swallowtails and a bumblebee within a foot of my lens.

Be still long enough, and beauty will come to you.

I published one of those photos in the Spring/Summer 2017 issue of Wabash Magazine, rationalizing to my art director that Wabash was a place of “transformation.” Which is true enough.

But when I look at the photo now I think of my son, John, Wabash Class of 04, whose birthday is August 27. As a boy he was captivated by butterflies and flying insects of all sorts. So much so that for several years for his birthday my wife would make butterfly nets and we’d pack up all six kids in the station wagon and go insect hunting in the meadows outside Indianapolis.

I think Wabash was good for John, but also a rude awakening. In grade school and middle-school he loved his friends and was fiercely loyal to them. In sports he was a team-centered guy through high school. So he reveled in the bond formed with his pledge brothers at Wabash. (Friendships we saw up-close when they all slept on our floor during their walkout.)

But during junior year when their focus shifted to careers and the future beyond Wabash, he was at a loss. Fortunately in time he fell in love with the beautiful cousin of one of those pledge brothers, they were married (pledge brothers and John’s high-school friends in attendance), and she and their four kids have given him new meaning, direction, and a work ethic and resilience well beyond my own.

I saw that most keenly on June 28 this summer when his daughter, our granddaughter, Isabella, was delivered by c-section at 28 weeks gestation. Alarming changes in her heartbeat had left doctors little choice. She was 2 pounds, 14 ounces and 16 inches long at birth, her eyelids the size of my fingernails. But she survived those critical first few moments after delivery and was taken to Riley Hospital’s Neonatal Intensive Care Unit, her father by her side.

When the surgical team came to her room later that day to prep and move her to the operating room to implant a pacemaker to steady her struggling heart, John went with her. He didn’t ask if he could go, he just went. I watched as he followed her isolette down the hall through the outer operating room doors, where a nurse explained he could go no further. Even then he took a couple steps forward as they wheeled Isabella toward the OR, his hand still on the isolette; he was not going to let his little girl go. The nurse said something that must have reassured him. Only then did he turn to walk to the waiting room, and only then after Isabella was out of sight.

As fathers we want our sons to be better than us, but how often do we get to see the moments when that happens?

A few days later I received a picture over the phone of John holding Isabella against his chest, the truest smile I’ve ever seen on his face.

Today the doctors and nurses are doing all they can so that one day Bella can leave that hospital room and breathe the outside air in the beautiful, messy world she has been born into. Her progress has been incremental; sometimes one step forward, one step back. When you enter the neonatal intensive care unit at Riley Hospital you are walking among miracles. We still need a few more to get her home.

Take three weeks off work for the first time in 37 years and you come back seeing things differently.

I spent an hour and a half in Caleb Mills’ Garden, more than 600 frames, trying to photograph the waning summer in motion.

Did you know a bumblebee can fly three yards (and therefore well out the frame of your photograph) in one second? Their wings beat 125 times per second.

A swallowtail’s tissue-paper-thin wings rise and fall at a relatively languid five beats per second, but that enables them to turn suddenly and unpredictably, making them elusive to photograph in flight.

So it took a while that August afternoon as I let beauty come to me, but I finally captured a single upbeat of its wings at 1/1,500th of a second as it leapt into the shimmering air, life at its most fragile, hovering before me.