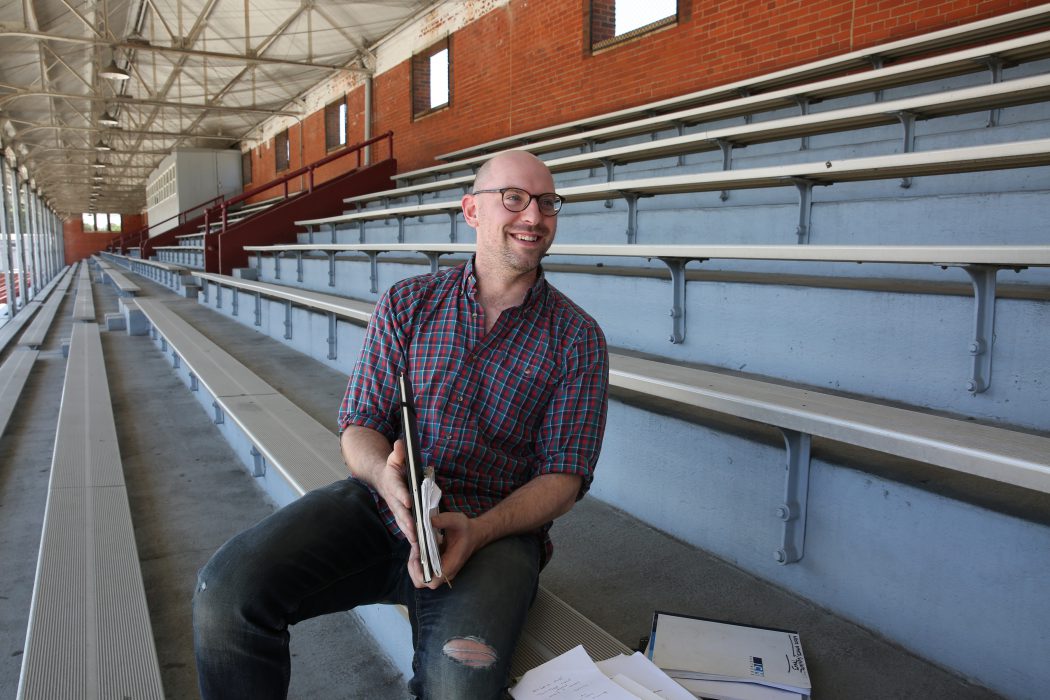 A way-too-bright July sun sent us scurrying for shade, and we found it at Evansville's Enlow Field, where filmmaker Russ Harbaugh ’06 had led the Bosse Bulldogs during his high school years. 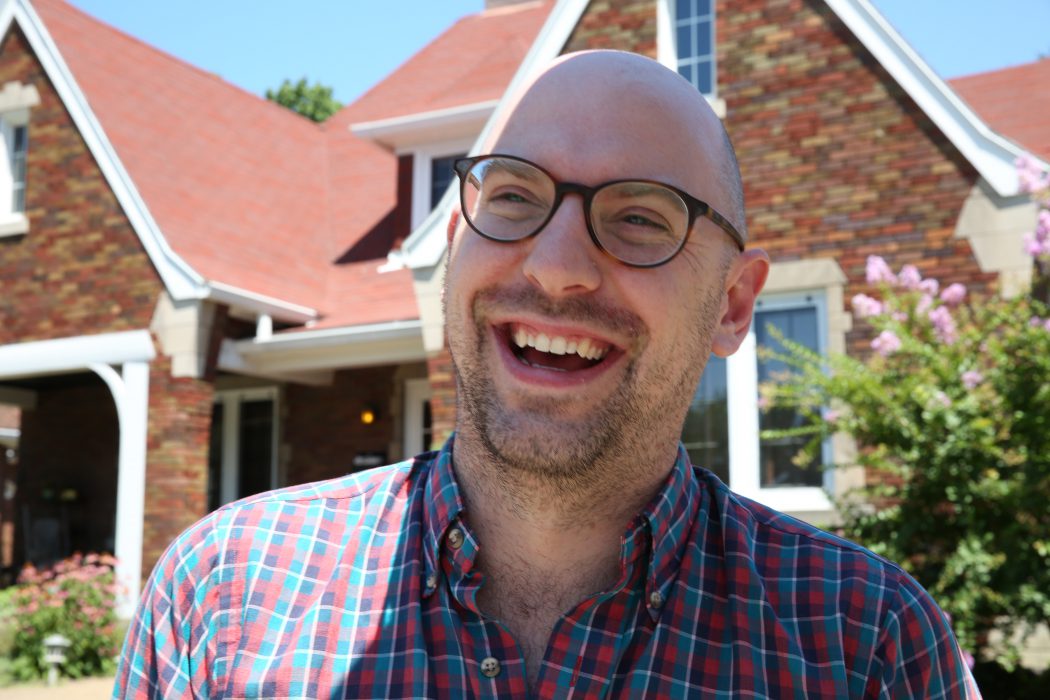 Harbaugh kept his sense of humor as our first attempt at making our own shade—with a yoga mat—didn't quite work out. 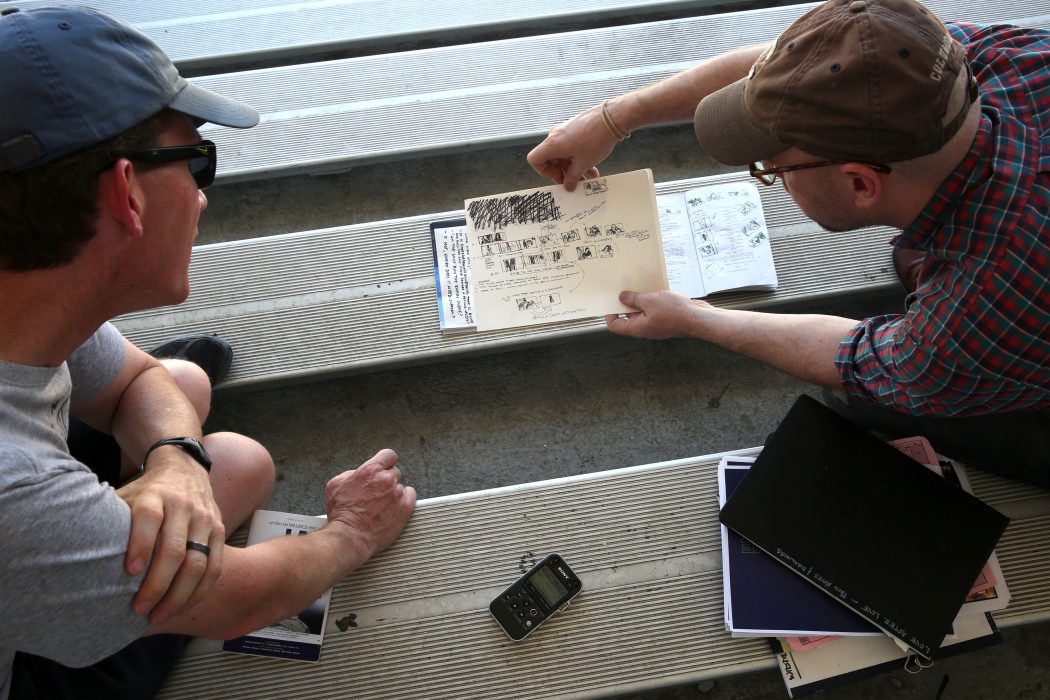 We asked Russ to bring the notes, scripts, and images he used to prepare to shoot his film "Love After Love." 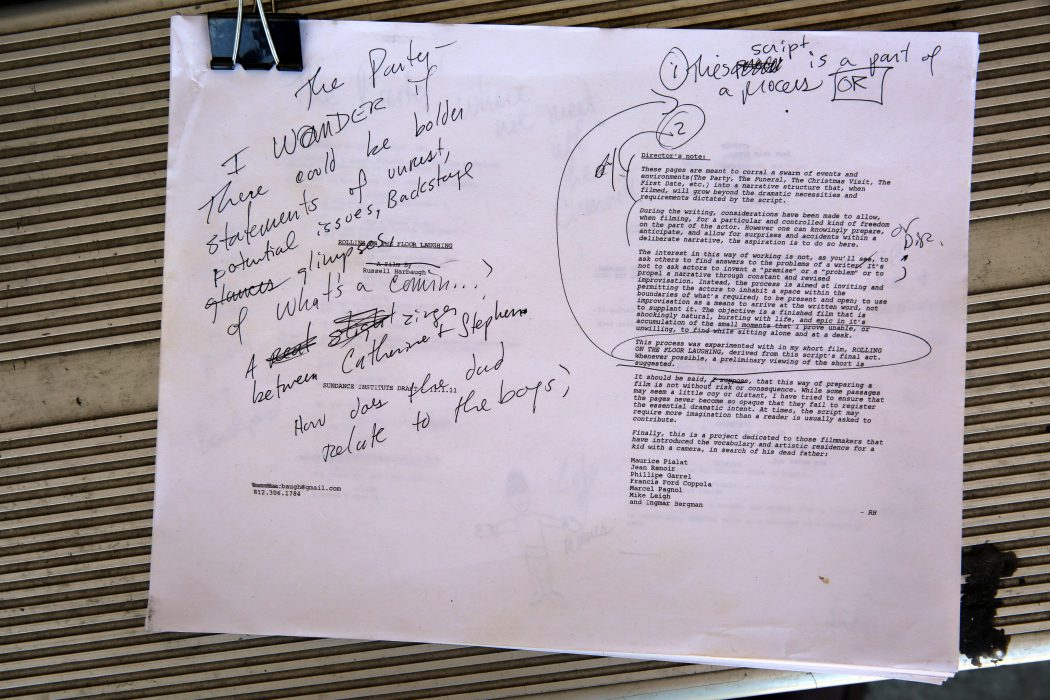 Director's notes to Russ's short film, "Rolling on the Floor Laughing," which was screened at the Sundance Film Festival. 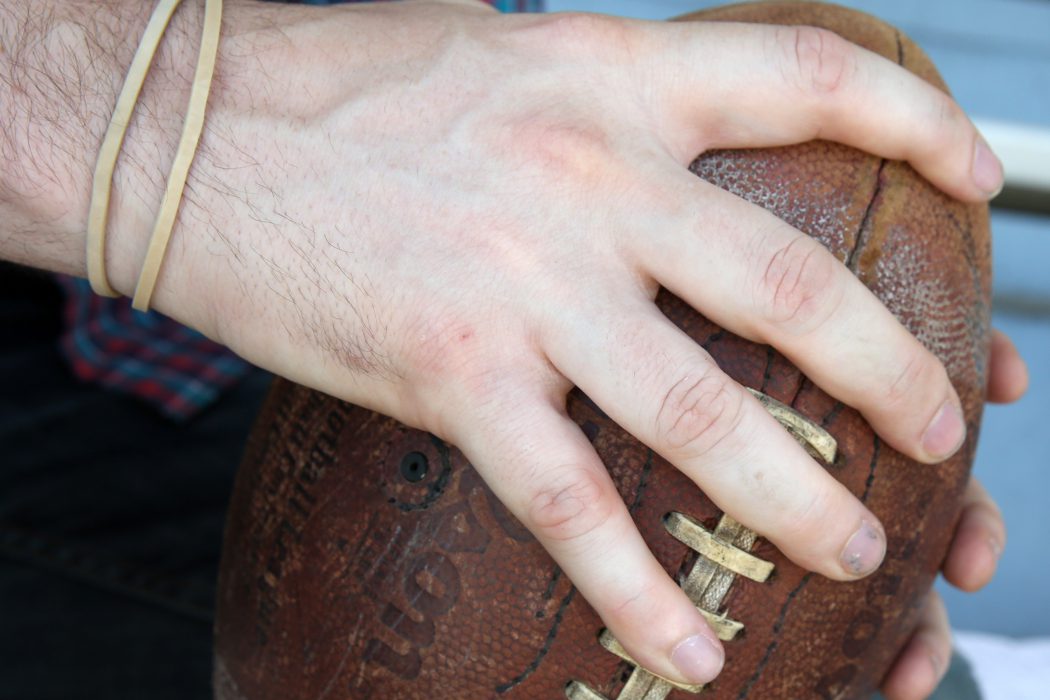 He hadn't touched a football since his Wabash days, but when writer Rich Paige tossed him one at the stadium, the former quarterback's hands gripped it like he'd never left the game! 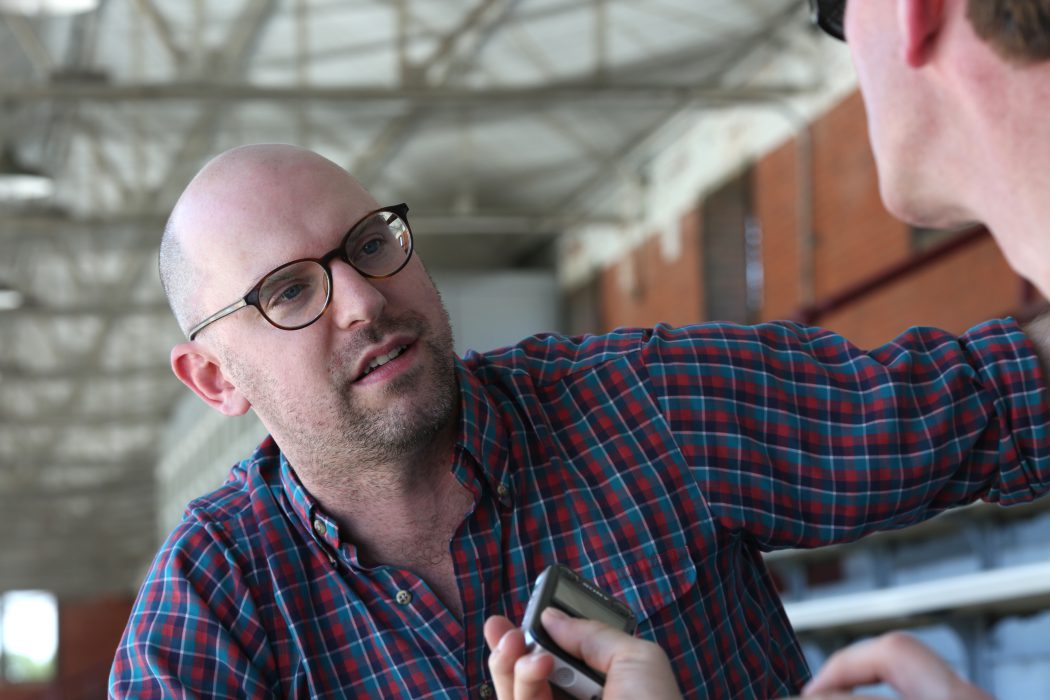 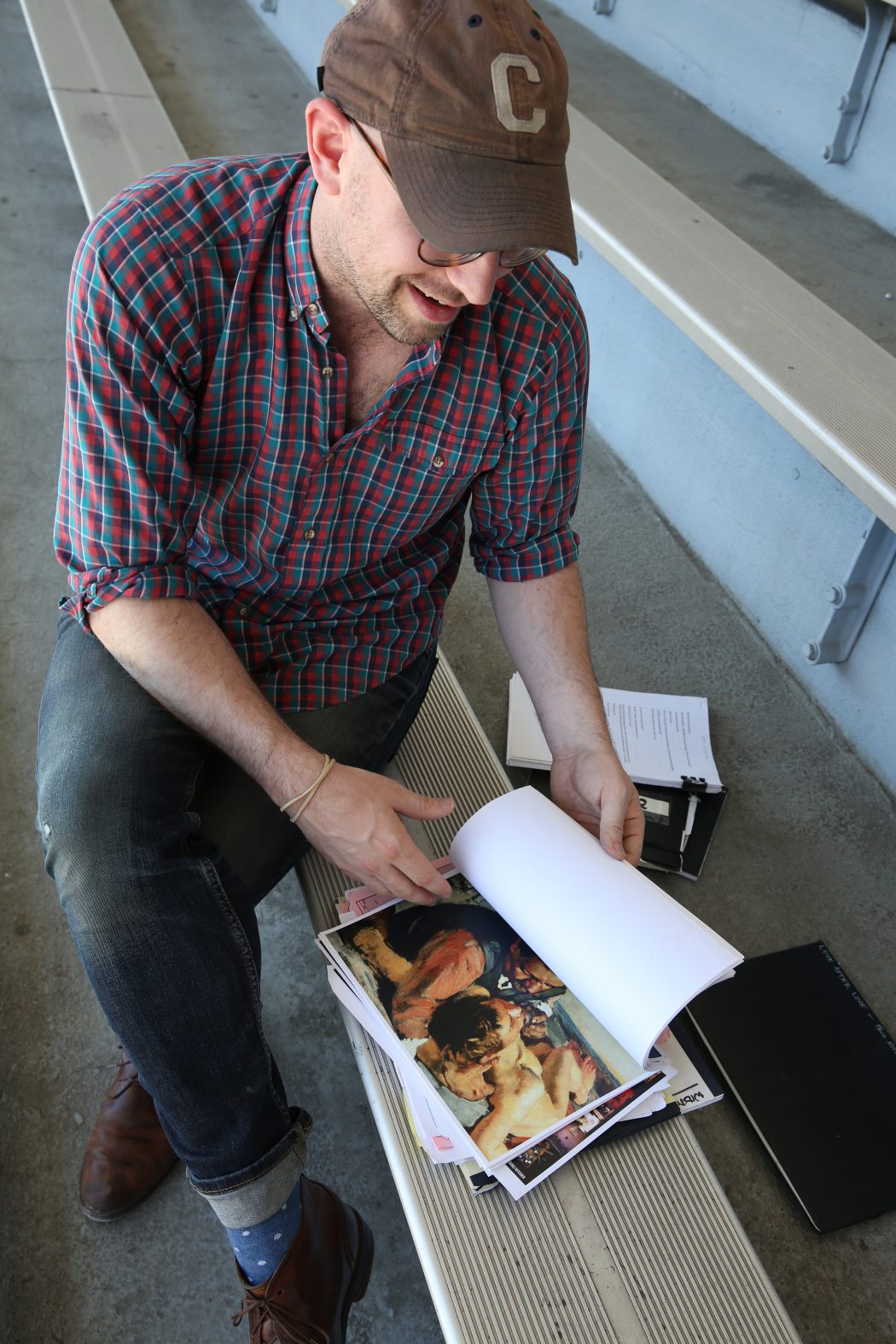 Leafing through the "image bible" for "Love After Love." 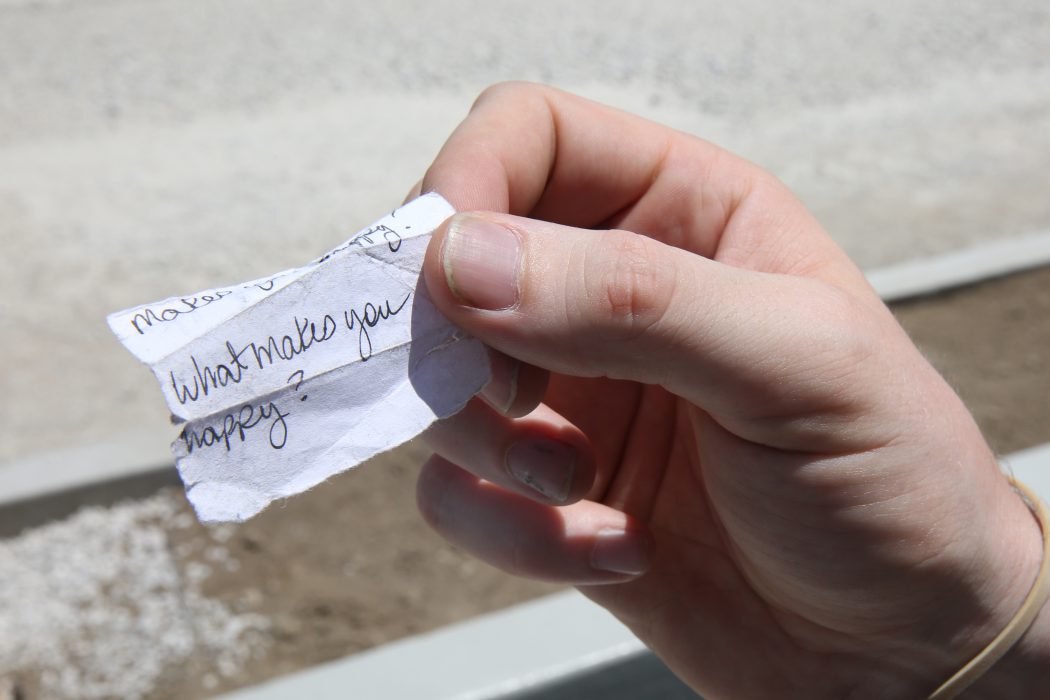 A note from Andie MacDowell to herself from the movie's opening scene. 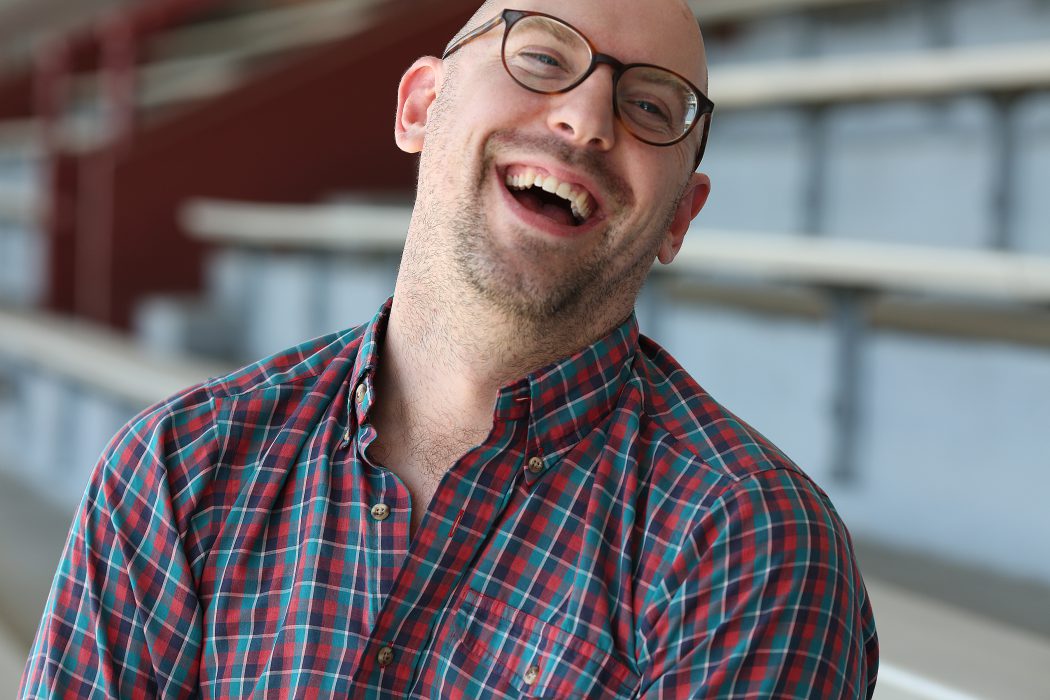 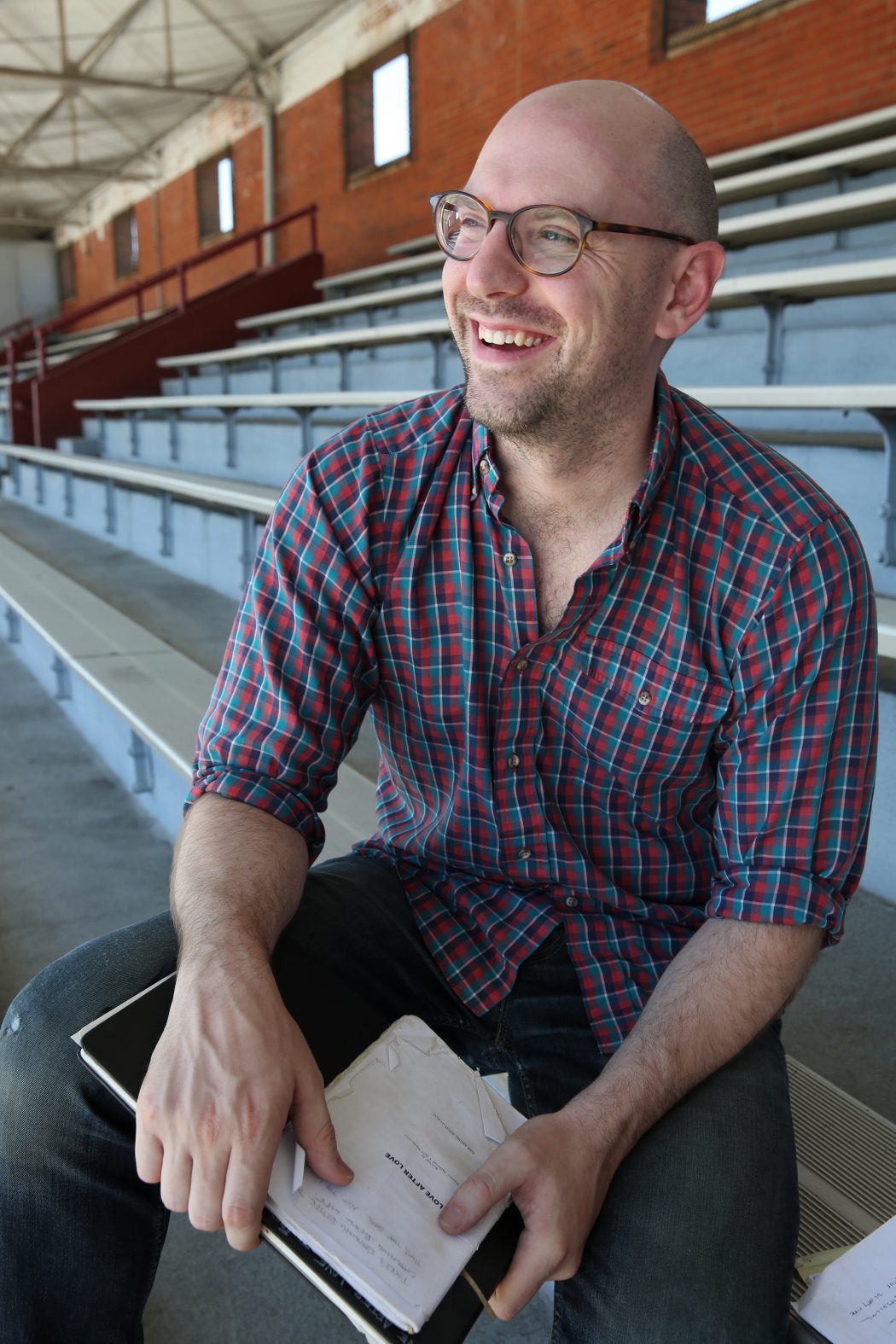 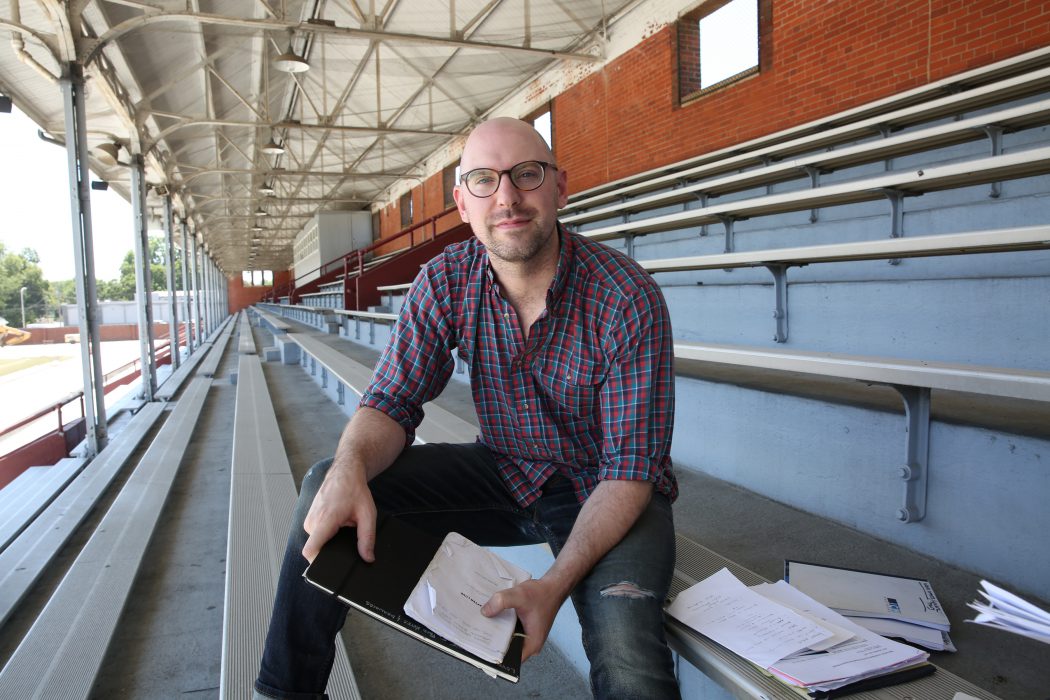 Made in the Shade

Photography is a quest for light, but sometimes there’s just too much.

Like last July 15, 11 a.m., when we were interviewing filmmaker and former Little Giant quarterback Russ Harbaugh ’06 in his old neighborhood in Evansville under a cloudless sky.

When I photograph Commencement at Wabash on these kinds of intensely bright days, people often come up to me and ask, “Beautiful day for pictures, eh?”

This was that kind of overexposed world, awash with faded colors and harsh shadows, all texture and any sense of depth blown out by the too-bright light.

Add to that the camera I was using didn’t have the pop-up fill flash I needed and I hadn’t thought to bring a reflector, and there was a good chance we’d driven four hours for nothing, at least visually.

Russ was still energized from the great reviews for his first feature film, Love After Love, starring Andie MacDowell and Chris O’Dowd, and thoughts of his next project. We could see the joy on his face when we congratulated him on the distribution deal he’d gotten for the film—a breakthrough for any young director. How often do we get to sit down an alumnus fresh from such a huge success early in his career? But now readers of WM wouldn’t see any of it, thanks to me.

I explained my problem to Russ, who was back in his hometown for just a day or two and had driven his mother’s car to meet us.

“I think she has a yoga mat in the trunk,” he said. “Would that help?”

Kind of. We tried a few shots with our writer Rich Paige holding the mat to shield Russ from the sun while I snapped away. We must have looked ridiculous—Russ standing on the sidewalk in front of the house he’d grown up in while Rich held a yoga mat over his head and I stood in the middle of the street bracketing every exposure, my embarrassment intensified by the fact Russ is a film director and knew all about light and the mistake I was making.

But he just rolled with it. Even as I apologized he told me not to worry. And when I suggested we move the shoot to his old high school’s football stadium where the covered stands might provide some shade, he said, “Sure!”

And seated on the bleachers overlooking the field where the kid who would become one of Wabash’s finest quarterbacks and a critically acclaimed director had once led the Bosse Bulldogs, we enjoyed the most relaxed, interesting, and free-wheeling interview/photoshoot I’ve done at Wabash. Rich and I had both seen the film and loved it, so we were peppering Russ with questions for most of an hour and a half. I mean, how often do you get to see a breakthrough film and a few days later get to ask the director all about making it? We ended the visit over thin crust and craft brews at one of Russ’s favorite pizza places.

Rich has written the story and we’ll post that later this week when the print edition of WM mails. But I wanted to share some of the photos that didn’t make the cut for the printed edition—one from under that yoga mat on the planet Venus, the rest from the football stands. So you can see what difference a little bit of shade can make, and you can see the happiness and generosity of spirit in Russ’s expression that turned our work that day into play.

Watch for “Making Love After Love” in the Summer 2017 edition of WM, mailing September 7.