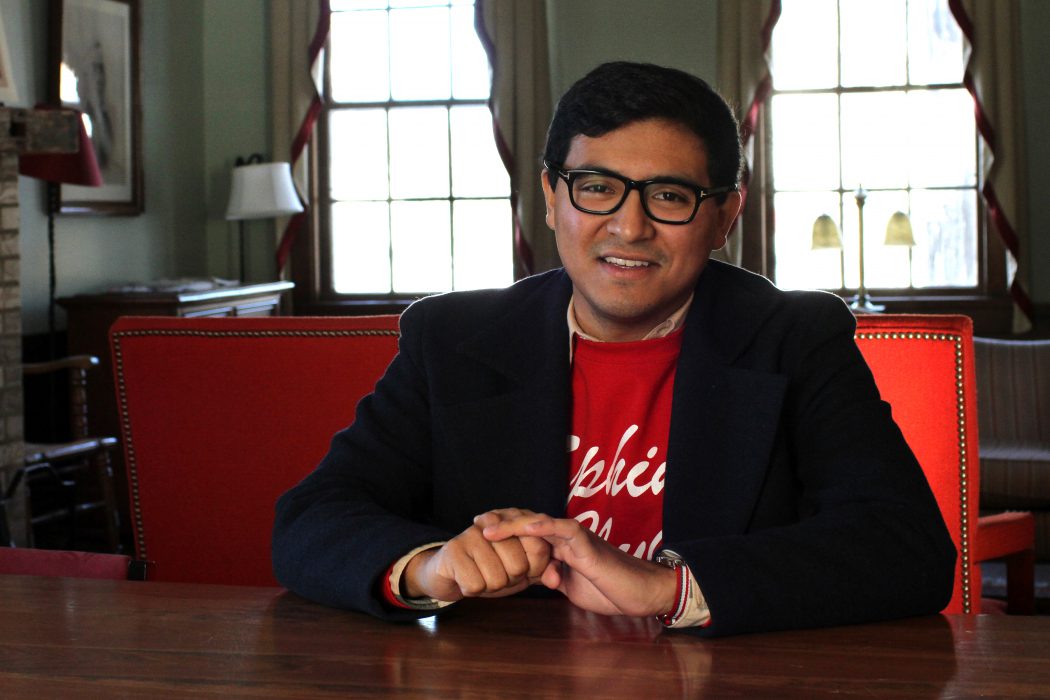 Alejandro Reyna ’17 was finishing his freshman year at Wabash when he attended a recital of original compositions by Taylor Neal ’14.

“Words always fall short of conveying the beauty of any composed piece of art,” Reyna wrote in his blog on the Wabash Web site. “Having said that, I wish you could have listened to the compositions he shared.

“That experience reaffirmed my decision to be music major, and I am eager to begin my independent study, when I will begin to apply the music theory I have learned to composition.”

That learning and inspiration come full circle Saturday, April 8, at 4:30 in Salter Hall, when Reyna will present his own senior recital of original compositions. (Click on the music slider above to listen to excerpts from rehearsals of Reyna’s oboe suite, piano work, and quintet for strings.)

The music is no less than the culmination of his Wabash liberal arts experience, four years during which he’s thrived as a singer, musician, and composer, but also been surprised by his love of subjects he’d never studied before and his participation in the Center for Innovation, Business, and Entrepreneurship.

“If I’d have taken psychology and philosophy classes earlier in my time here I would have minored in one of them,” Reyna says, noting that he saw value of the philosophy, in particular, during the senior colloquium class he completed last semester.

His time living with a host family in Ecuador, learning the folk music of that country, and performing there also inform his music and comprise an education far different than he would have received if he’d chosen the more music-focused curriculum at the other school he considered, the Berklee College of Music in Boston.

“If I had attended Berklee my focus would have been on jazz composition, I wouldn’t have studied Spanish (his minor) or philosophy, and I doubt if I would have joined a choral group,” he says.

Reyna performed his first solo with the Wabash College Glee Club last fall, and he wrote a piece for the group for his recital.

“So much of what I learned here is in the music I have written,” says Reyna, who hails from near Houston, Texas and whose family will hear his compositions for the first time at Saturday’s recital. He says he’s looking forward to seeing them, but is also a little nervous about what they’ll think of his music.

“I’ve been away from them for four years,” he says, “and this music represents what I have done.”

It also reveals much of the man Reyna has become during his four years at Wabash.

Professor Peter Hulen, his composition teacher and chair of the music department, believes Reyna has nothing to worry about. A recital like this, Hulen says, “gives full meaning to a composer’s work, allowing it to be shared as real, live music as a human process with appreciative participants. It is nothing less than finally rendering concept into art, idea into human experience. What could be more exemplary of what we do at Wabash?”