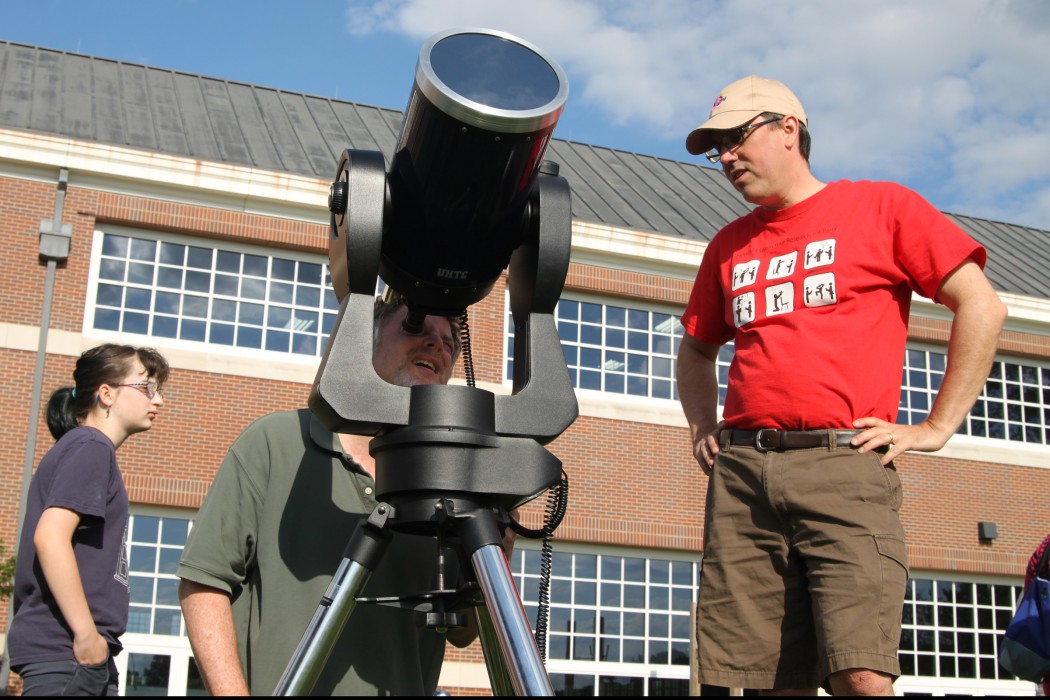 Jim Brown has taken us to remarkable destinations near and far. Thanks to him, members of the campus community got to see two transits of Venus across the sun (2007, 2012). 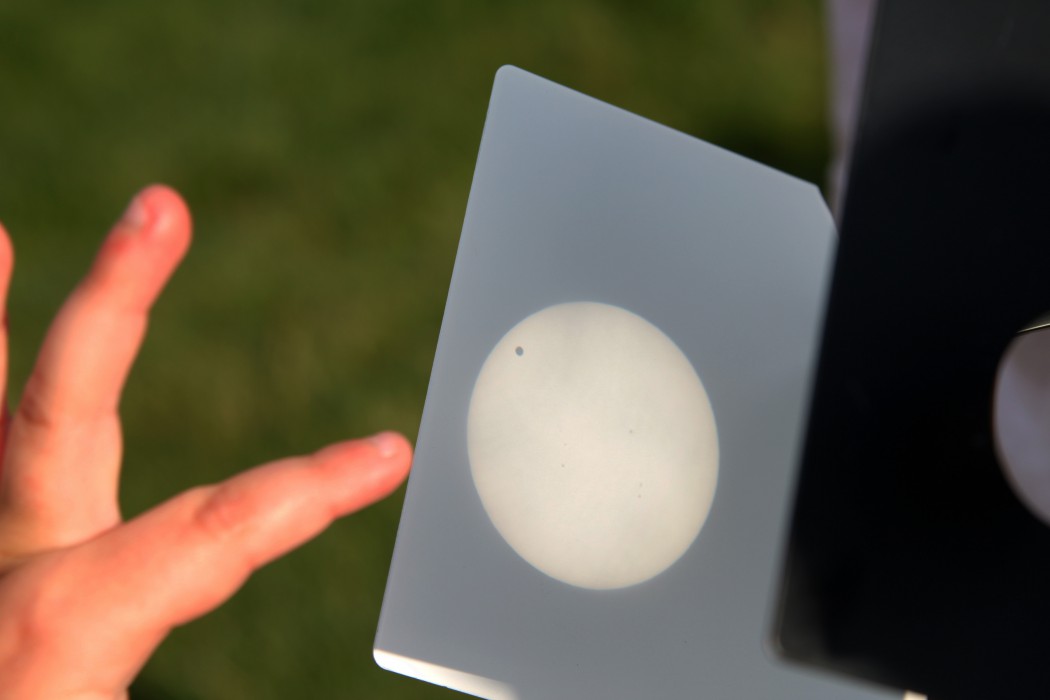 Venus (small dot in photo) crossing in front of the sun. 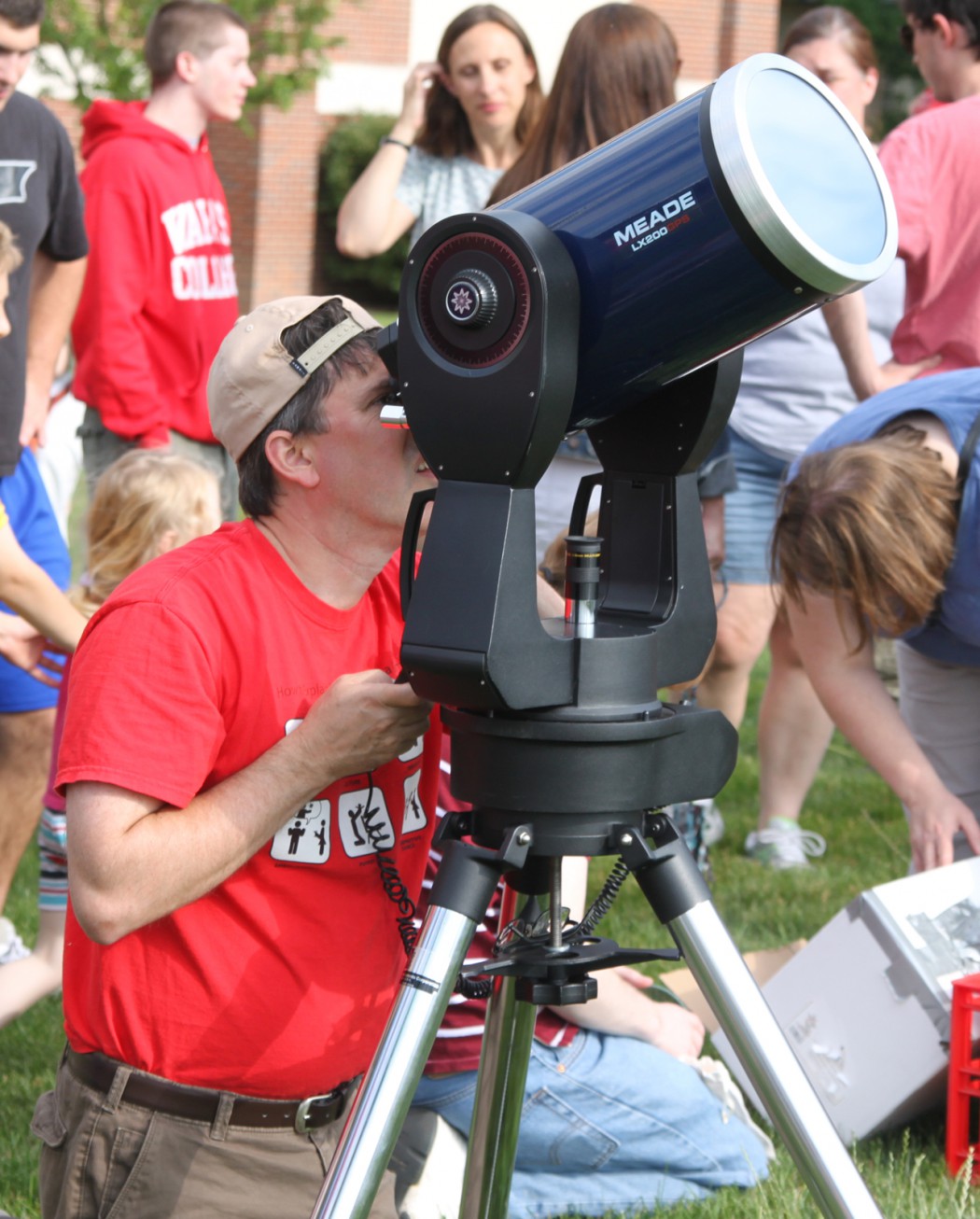 Brown dials in the telescope. 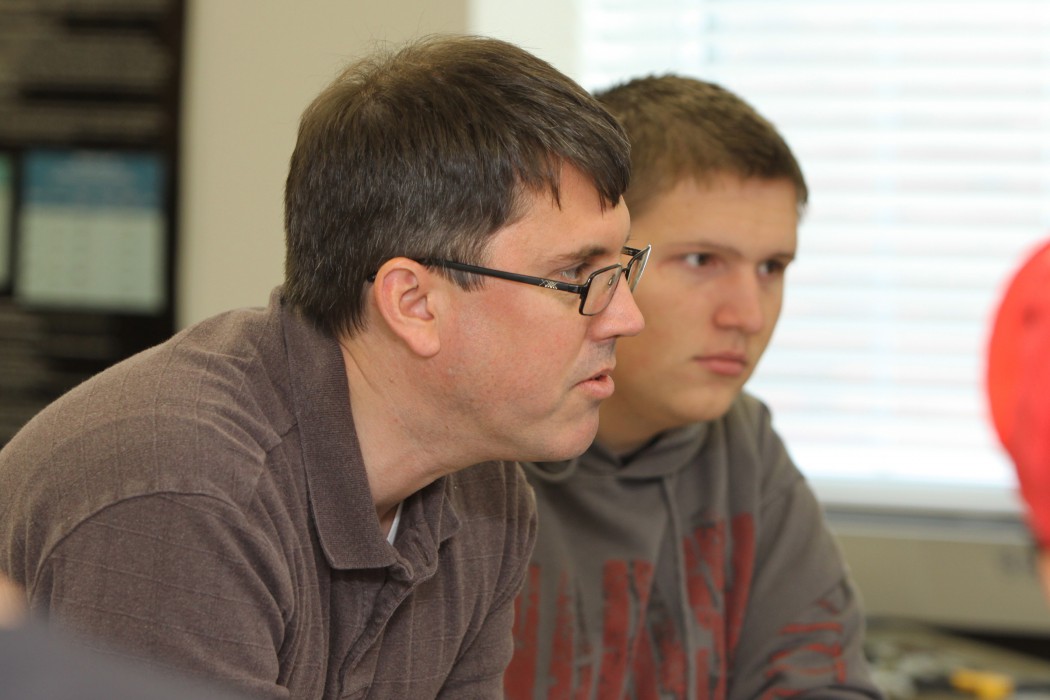 The teacher at work. 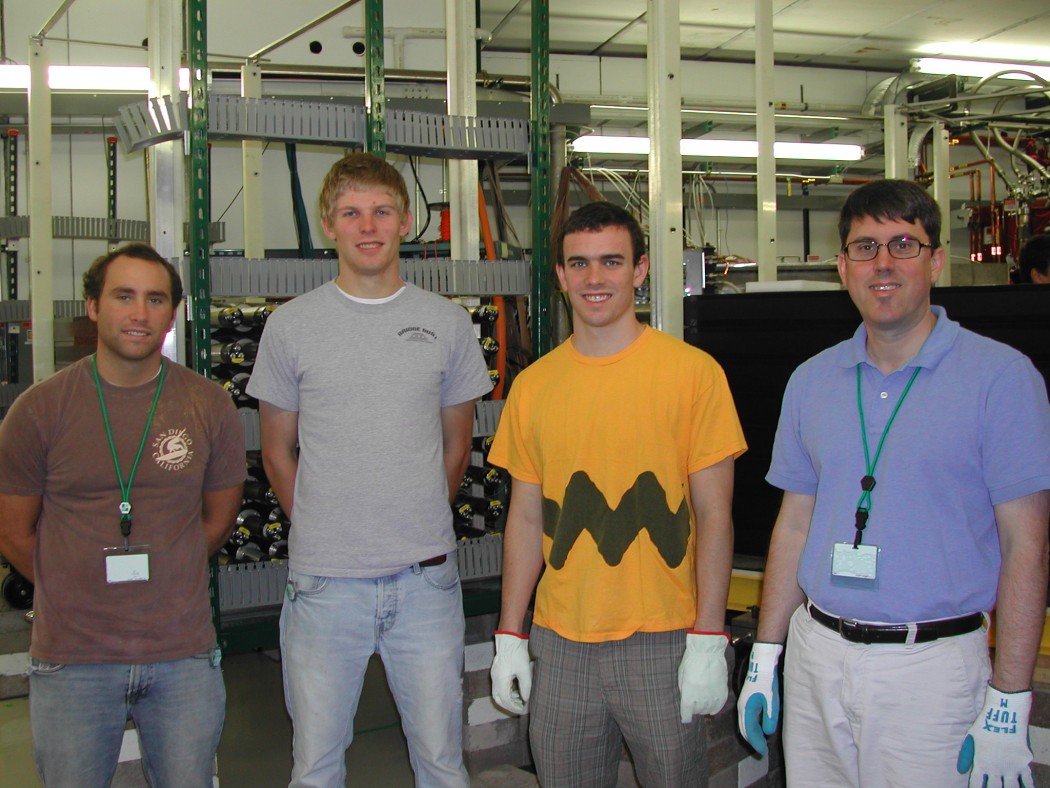 Celebrating the promotion of Jim Brown to full professor of physics, we look back to 2007 and WM’s first encounter with his research and masterful teaching. For a more recent glimpse of his innovative approach, check out this video of his freshman tutorial students performing a dance/theatrical interpretation of the making of the atomic bomb in the experimental theater.

Jim Brown makes and measures “exotic” nuclei, and his students join him for the creation.

“Serendipity is a lie,” says physics professor Jim Brown. Such happy accidents, he insists, “only happen when you work to create the conditions for them to happen.”

All the more reason for Brown to stop by the so-called “serendipitous spaces” on the third floor of Goodrich Hall—work areas designed to increase encounters between students and their teachers. And that’s where you find him today, discussing a sophomore’s physics problem. The student thinks he has solved the equation, but can’t explain it.

“I think you’re actually right, but I don’t like that you don’t know why,” Brown says.

A junior physics major asks Brown to look over the results of an experiment he is running, pointing to figures at the bottom of the page.

“Everything before this is unusable data,” he says.

“Why?” Brown asks, eyes sliding up the page and leveling off eye-to-eye with the student. When the young man’s explanation doesn’t sway the professor, Brown good-naturedly chides him to get back to work.

“The beauty of physics is that you don’t have to remember a lot. There are a few powerful ideas, and if you know how to use them to work from a starting point to a conclusion, you don’t have to remember the specific arguments,” Brown says as we walk toward his office. “But you have to work through enough of these arguments to know how to construct them.”

Brown’s students get plenty of practice at that.

“Half of our students will go on to grad school, and our goal is to prepare them to compete at that level,” Brown says. “Today that means they’ll need to have a substantial research experience some time in their undergraduate career.”

Brown can provide that as well.

From a desk cluttered with papers beside a table stacked with books, Brown talks about the research he’s most excited about—and how it benefits his students.

The photograph of Jim Brown on his Wabash Web site homepage shows him beside the College’s eight-inch Meade Schmidt-Cassegrain telescope.

“The rules of physics apply to the very large and the very small,” Brown says. “That’s something that appealed to me from the moment I first became interested in physics in junior high.

That’s when he presented a book report on an article in The Progressive magazine that contained blueprints showing how to build a hydrogen bomb.

“I probably got a little carried away on that one,” Brown laughs.

These days he’s focused on even smaller things—making “exotic” nuclei.

“Exotic” is an attention-grabbing way of describing unstable atomic nuclei—those with more neutrons than protons, or vice versa. In his research at the National Superconducting Cyclotron Laboratory (NSCL) at Michigan State University, Brown and his colleagues create exotic nuclei by accelerating a stable nucleus to a third the speed of light and letting it strike another nucleus in a target. The exotic nuclei then break up and Brown measures the speed and direction of the neutrons with the modular neutron array he helped to develop after his post-doctoral research days in the early 90s.

Most exotic nuclei can’t be found naturally on earth. But they do occur in stellar explosions and play an important role in the development of elements. Studying them paints a picture of the inner structure of nucleus and how it works, but also helps us understand how the elements evolved and how stars live and die.

Wabash interns have studied alongside Brown and others at NSCL since the professor’s arrival at the College in 2003. It’s an experience that certainly qualifies as the “substantial research” today’s physics undergraduates need.

It puts them near the edge of what Brown calls the “uncharted territory” of physics.

On the otherwise naked walls of Brown’s office is the 3’x5’ “Chart of the Nuclides,” a graphic representation of the nuclei of all the possible natural and man-made isotopes of elements from the periodic table, along with the “magic number” of neutrons and protons that make them stable. The chart has many gray boxes, which represent nuclei of isotopes you’ll find on earth naturally. There are many more orange and yellow boxes, indicating manmade isotopes. But the largest area of the chart is blank.

“All these open, white spaces—that represents the nuclides that have yet to be created and measured,” Brown says. “It’s terra incognito—uncharted territory.”
Moving further into that uncharted territory is what most excites Brown about his research. For this summer, he has funding from the National Science Foundation to continue his work with the modular neutron array at NSCL. Down the road, he’s contemplating smaller-scale but more leading edge explorations of the nuclear force and the structure of nuclei. Having earned tenure in December, Brown will be entering that unknown territory with students alongside him.

Our conversation returns to the professor’s distrust of serendipity—particularly when it comes to careers for Wabash physics graduates.

“We’re on a good research track in the department, we’ve been doing innovative things and more laboratory teaching than we used to,” Brown says. “We’ve been working our students pretty hard, and, like good Wabash students, they’re willing to work hard.”

So when Brown learned that recent physics grad Suniti Karunitillake ’01 found his dream job working with the Mars Rover team at Cornell University, he wasn’t surprised.

“Good things happened to Suniti at Cornell, but it was hardly serendipity,” Brown says. “He chose that place for good reasons, he searched for opportunities, and he had worked hard. When the job came up, he was up to the challenge and ready.”

When it comes to exploring uncharted territory—whether on Mars or inside exotic nuclei—Brown says, “Our students are ready.”