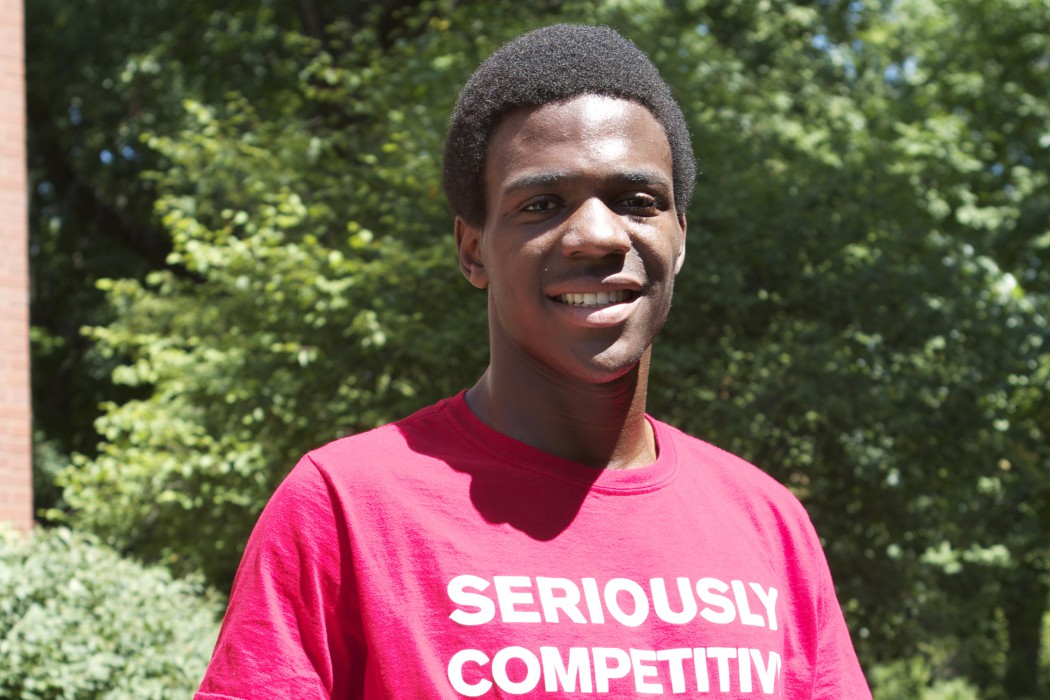 Fabian House through the years: 2012, his freshman year. 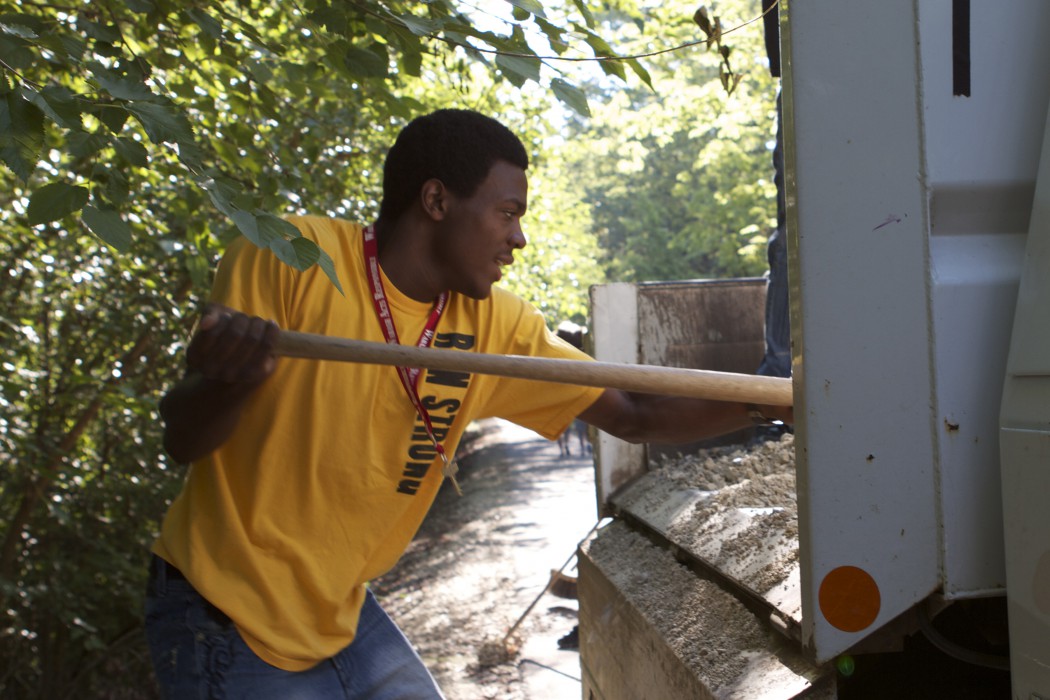 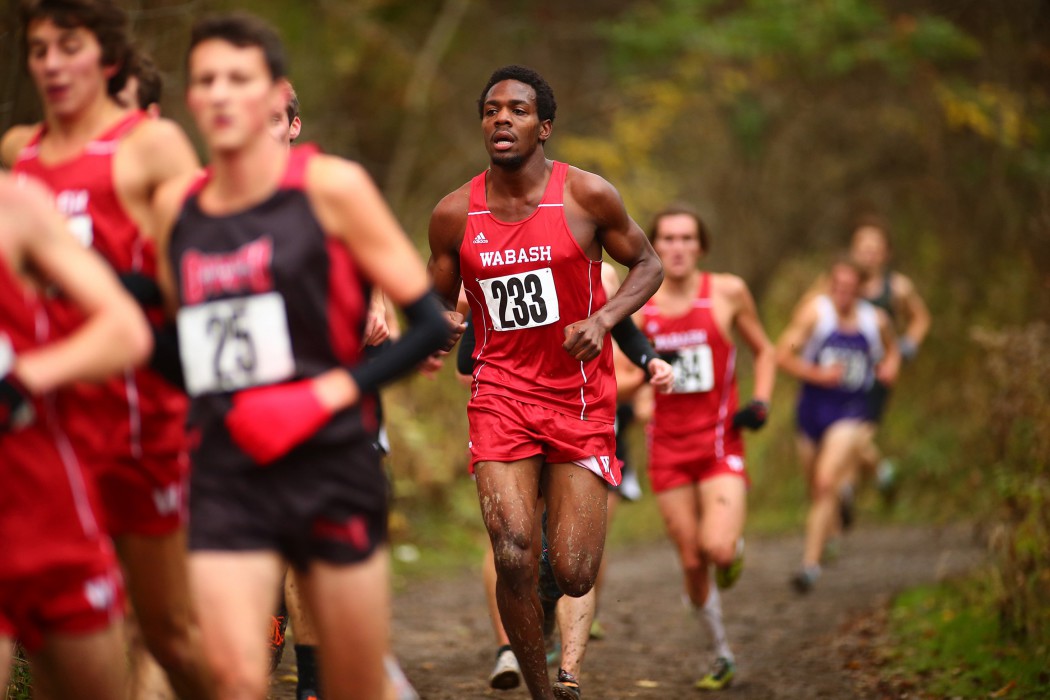 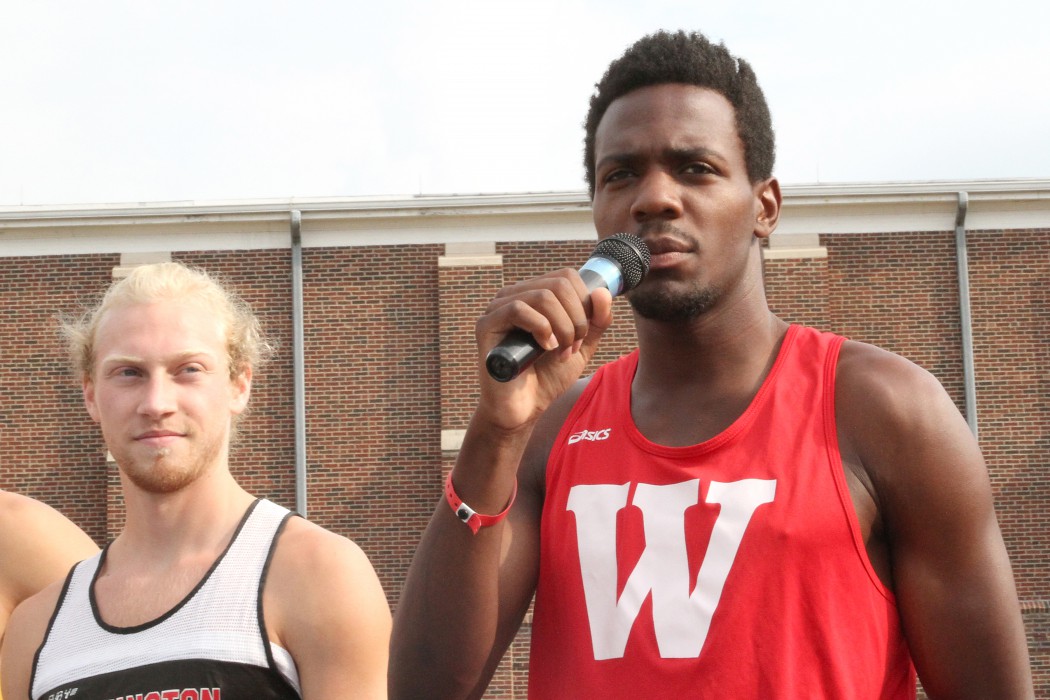 Introducing himself at the Charlie Finch Fun Run, 2015 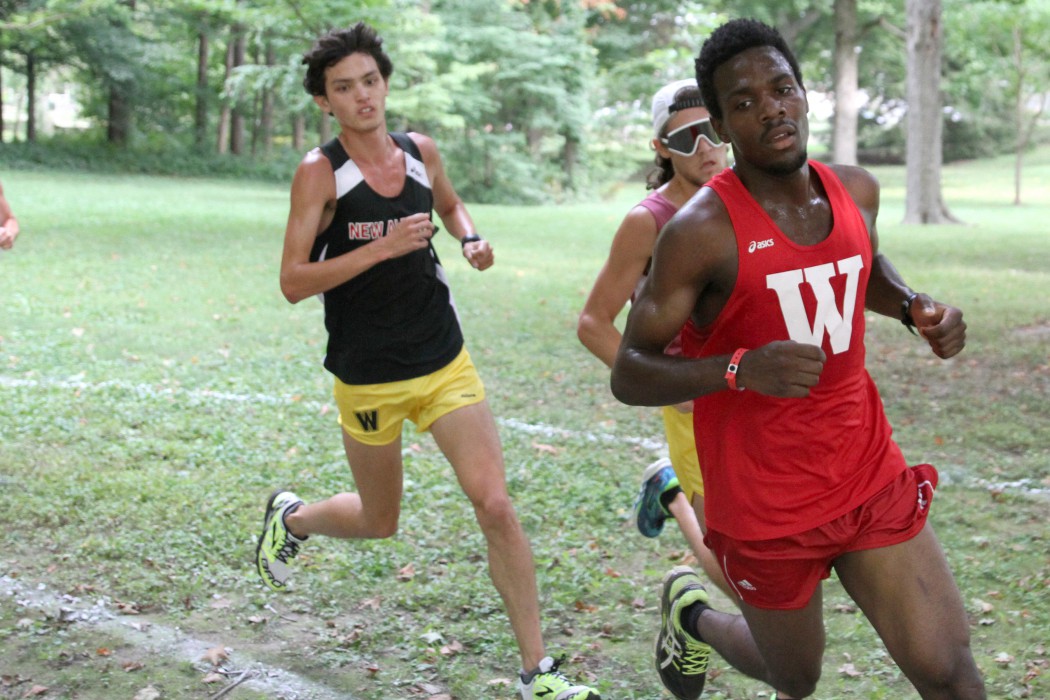 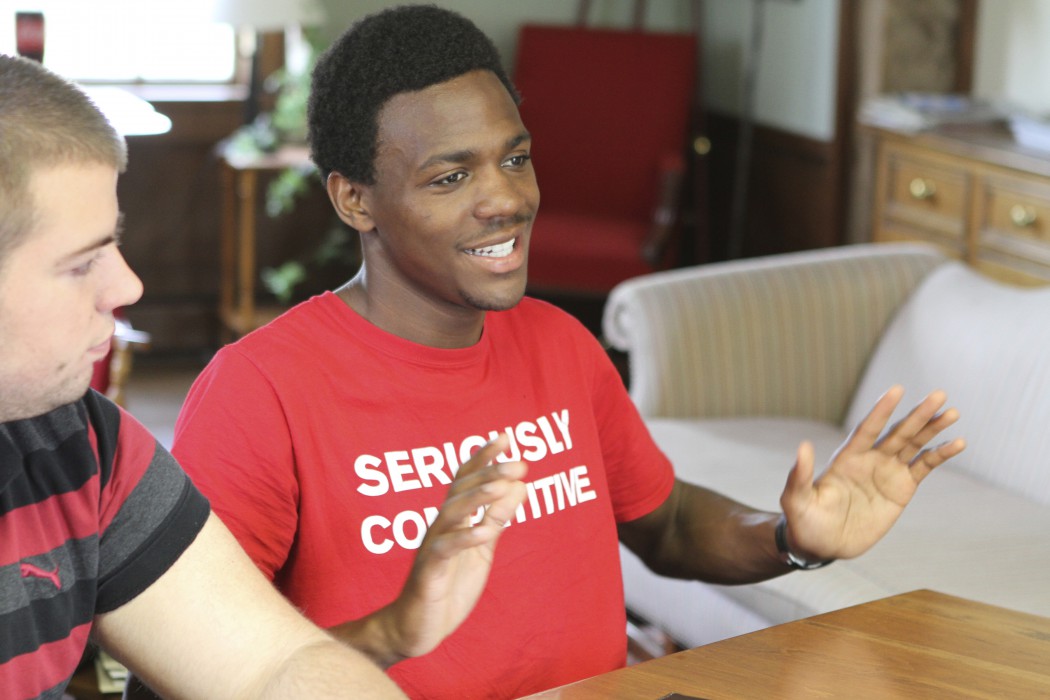 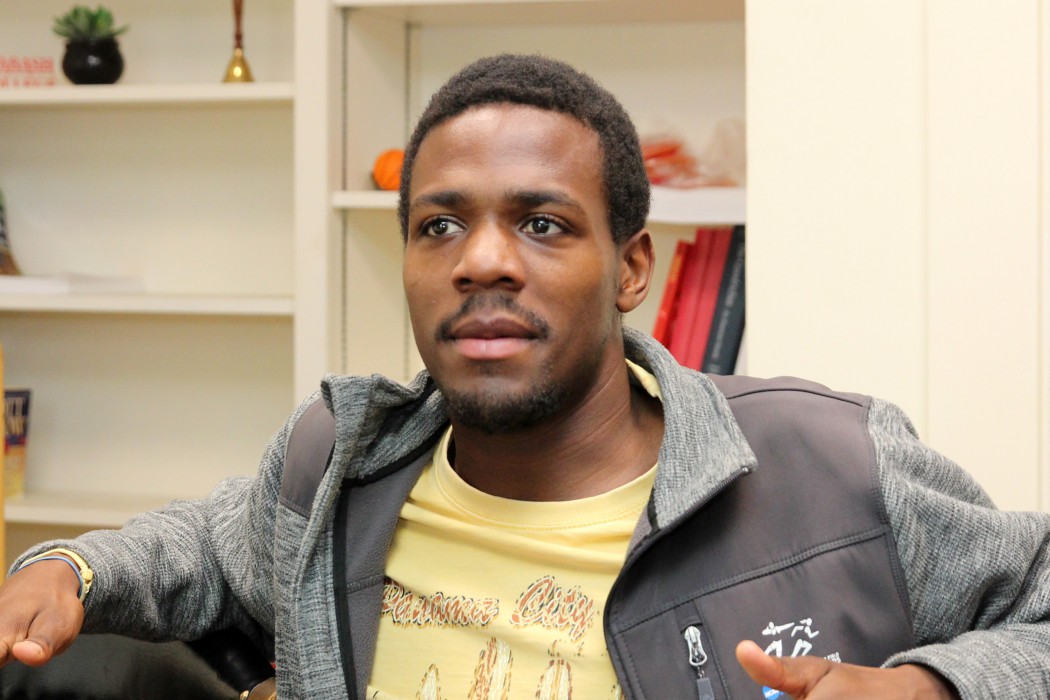 House interviewed in Hovey Cottage, May 2016 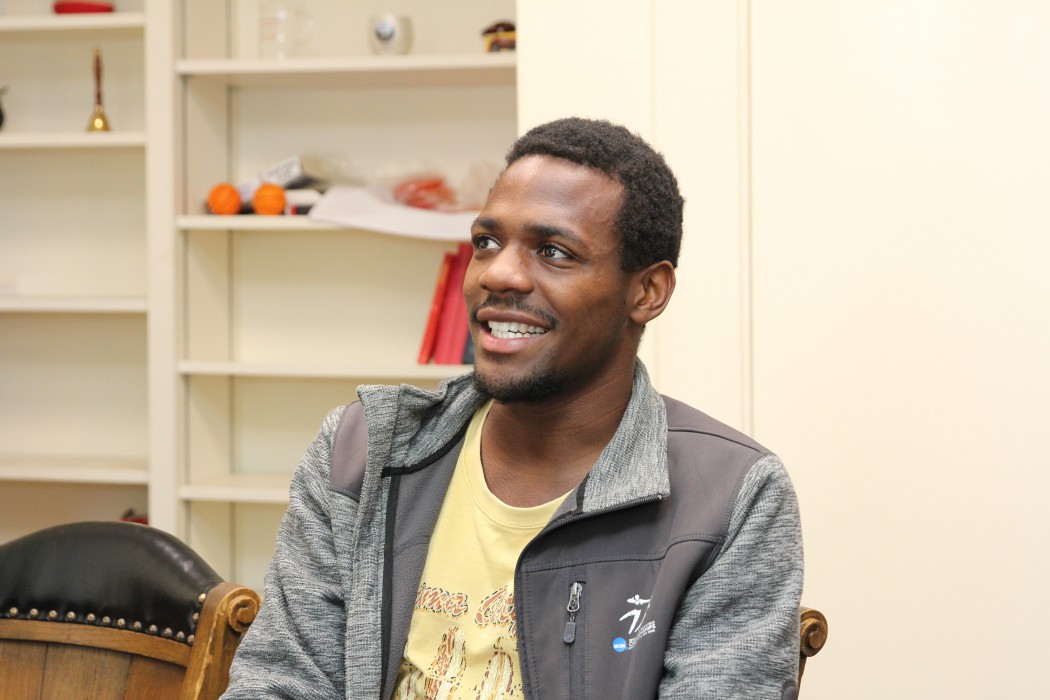 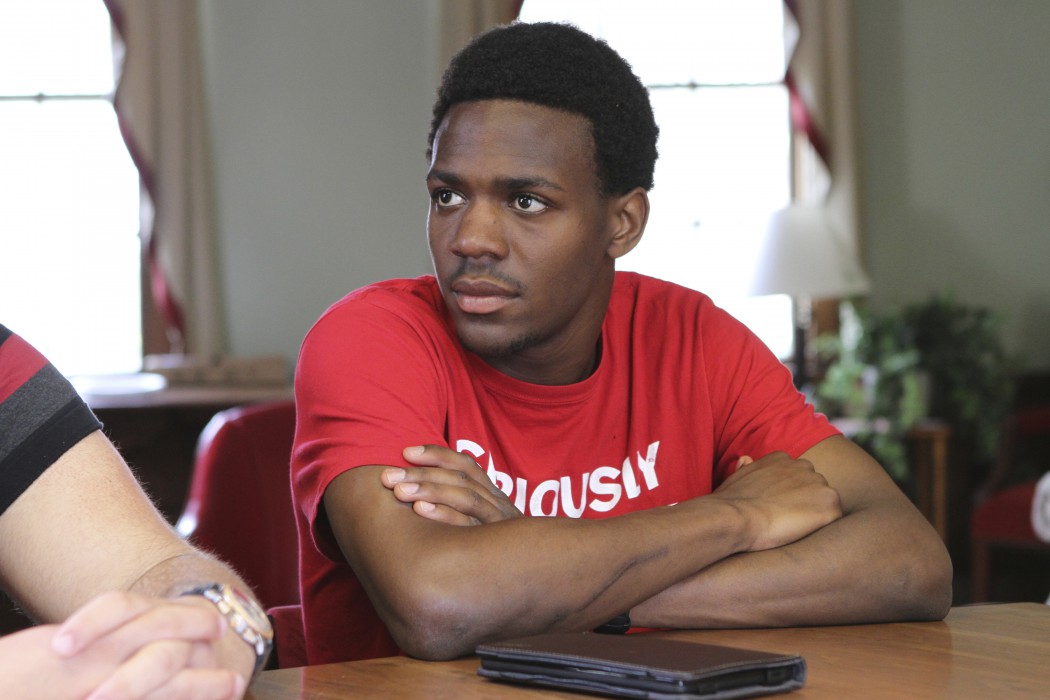 Fabian House ’16: The Face of Wabash

“I have given over 350 official tours on campus. My last one was really special. After the son went into class, the parents thanked me and said, ‘You said a lot of things and answered a lot of questions that made Wabash feel like a place that he would want to go.’ I got a little tearful.”

Richard Paige –In my three years on campus, Fabian House, as much as anyone, has been the face of Wabash College. The guy, like many here, is involved in seemingly everything: resident assistant, orientation leader, vice president of the student senate, student representative to the NAWM board, member of the Little Giant cross country and track and field programs, and a tour guide for Admissions.

Between the official and more informal tours, Fabian thinks he’s led more than 500 tours over the last three and a half years. Just think of how many future Wabash men’s first impressions were shaped by Fabian. Those tours are the primary reason I think of him as the current face of the College.

With final exams complete and Commencement a few days away, I thought it would be interesting to see how Fabian, who will teach on the east side of Indianapolis next year, felt about his time on campus and the impacts he’s had. Below are his thoughts in his own words:

“I don’t feel like I’m done. I get the feeling that all of this is another step. I’m going to be off campus. I won’t be seeing the same sights here on campus that I’ve grown used to, like the tulip tree just outside Center Hall, and in the winter, the Milligan Clock beside Baxter Hall. I’m looking forward to being an alum, to being an ambassador for Wabash in a different way. I’m not going to be giving tours per se, I’m going to miss that for sure, but I hope, as a teacher working in the Indy area, that I’ll be able to at least guide students this way and make them seriously consider an all-male institution.”

“One of the biggest things I’m going to miss is fall at Wabash. The fall months are gorgeous, the leaves change, and so that is a beautiful moment for Wabash. I’m going to miss the Monon Bell Chapel, where the seniors talk about these formative years and how important it is to keep the Bell. I’m going to miss cross country and running on a team where we try to peak and run our best when it gets cold in the fall. Defending our regional championship this past season was probably my best athletic moment at Wabash. I’m going to miss Honor Scholarship Weekend as well. It’s a big introduction to Wabash – one I had and enjoyed – and is something that we’ve made very much a campus moment. Everyone knows what Honor Scholar is all about and everyone is excited for it.”

“At the banquet, they thanked me for my three and a half years of service and said I have given over 350 official tours on campus. That doesn’t count all of the unofficial tours I’ve given. I gave my last tour last Wednesday (April 27) and it was a really cool moment because I wasn’t going to tell the folks that it was my last tour. I told my first tour that it was because I felt like I needed to let them know that it was going to be an interesting ride. My last one was really special. After the son went into class, the parents thanked me, which happens occasionally, and said, ‘you said a lot of things and answered a lot of questions that made Wabash feel like a place that he would want to go.’ I got a little tearful. It’s my last tour and I get folks telling me that I gave a tour that made Wabash seem like an accessible place for their son. That’s how I want every tour to be. It’s not how many tours you give, it’s the impact you had in that 45 minutes you are with them.”

“I can’t imagine myself doing anything else right out of college other than teaching (in Indianapolis for Indiana Teaching Fellows). I’m happy that I’ll be close. I’m going to know guys in the next three graduating classes – guys I gave tours to, guys that I’ve come to know through classes. I don’t think you really are finally able to call yourself an alum and fully disconnect from Wabash as a student until you are able to look at a graduating class and know that you didn’t go to class with any of them. In many ways I still feel very connected to campus and the day-to-day activities.”

“At no one point do you think that you’re done. It won’t hit me until the summer that I’m a Wabash graduate.”