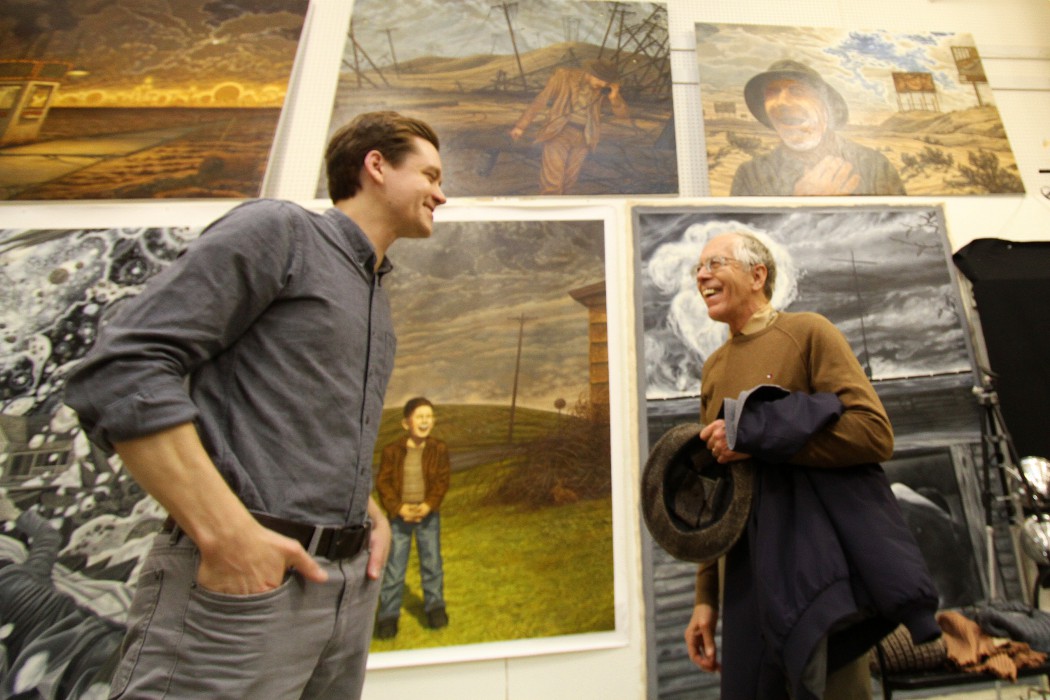 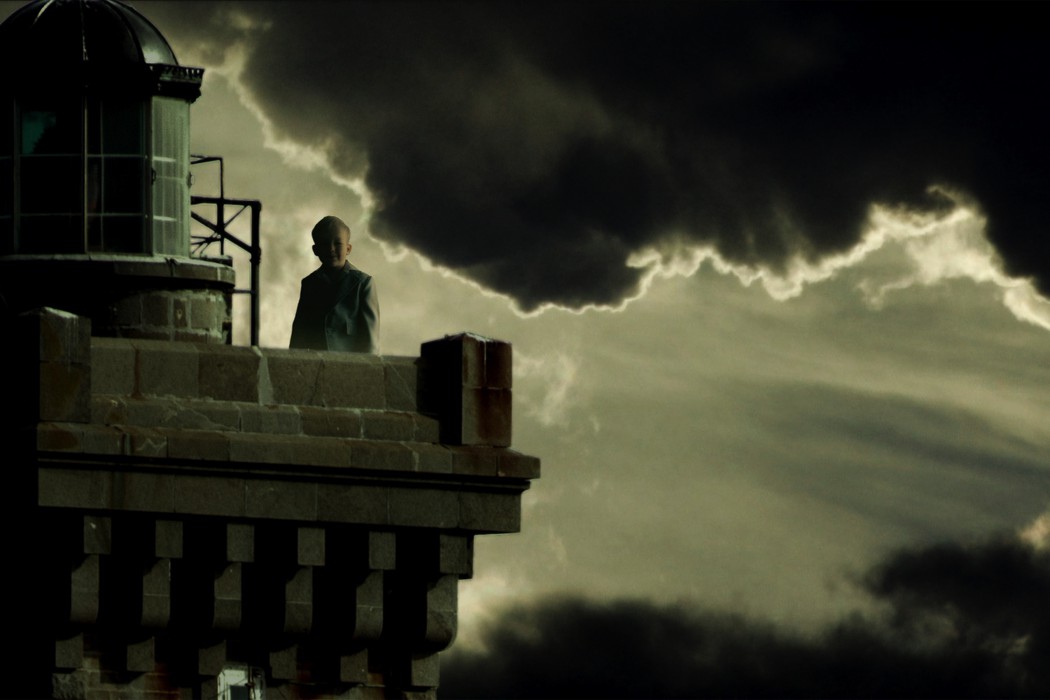 A scene from Professor Mohl's film "The Anatomical Universe" 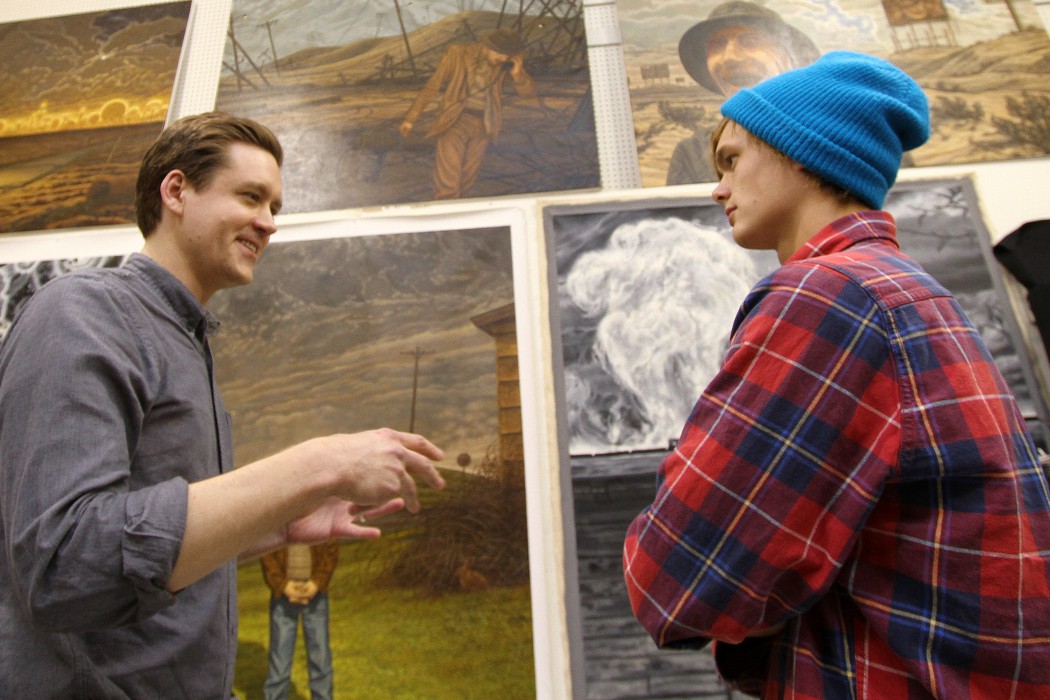 Mohl talks with Free Kashon about the films. 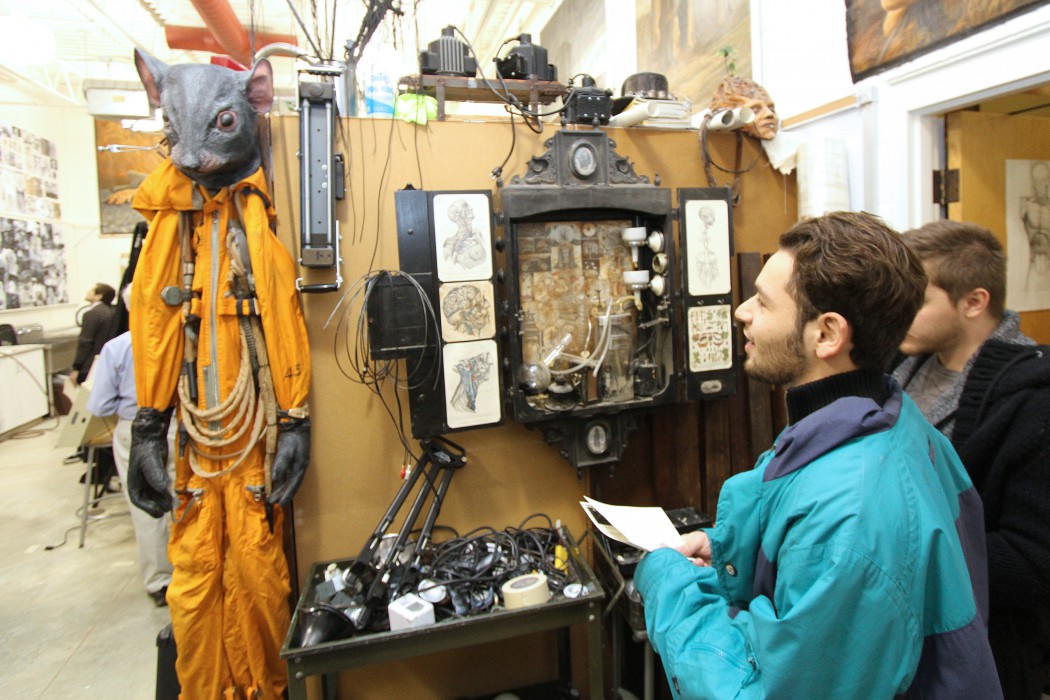 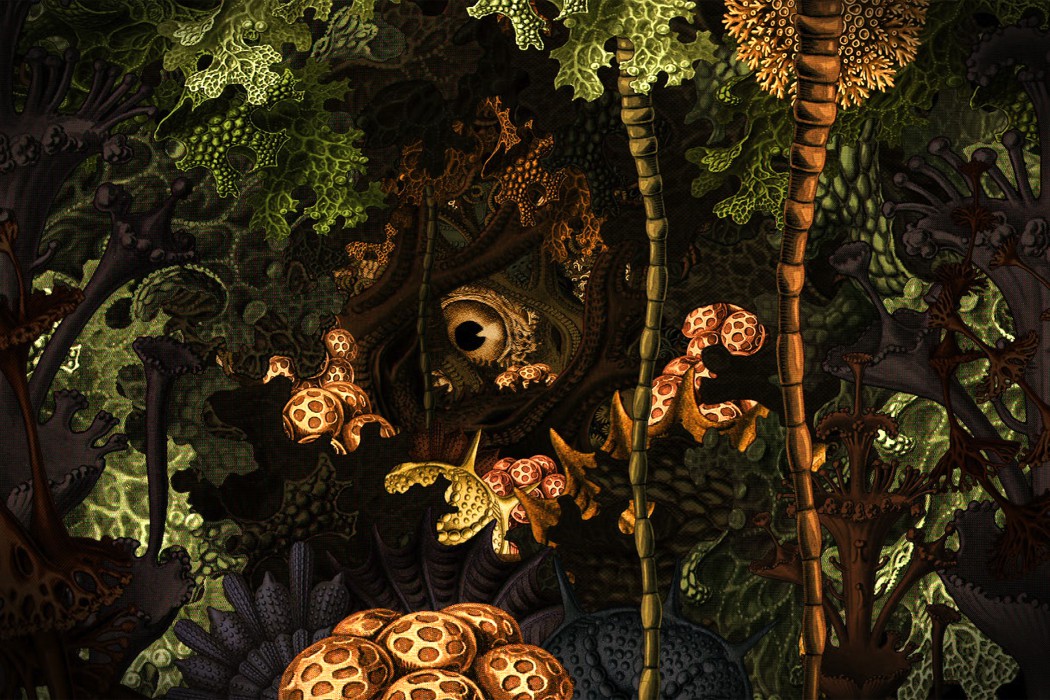 A scene from "The Diver" highlights Mohl's painting and drawing skills. 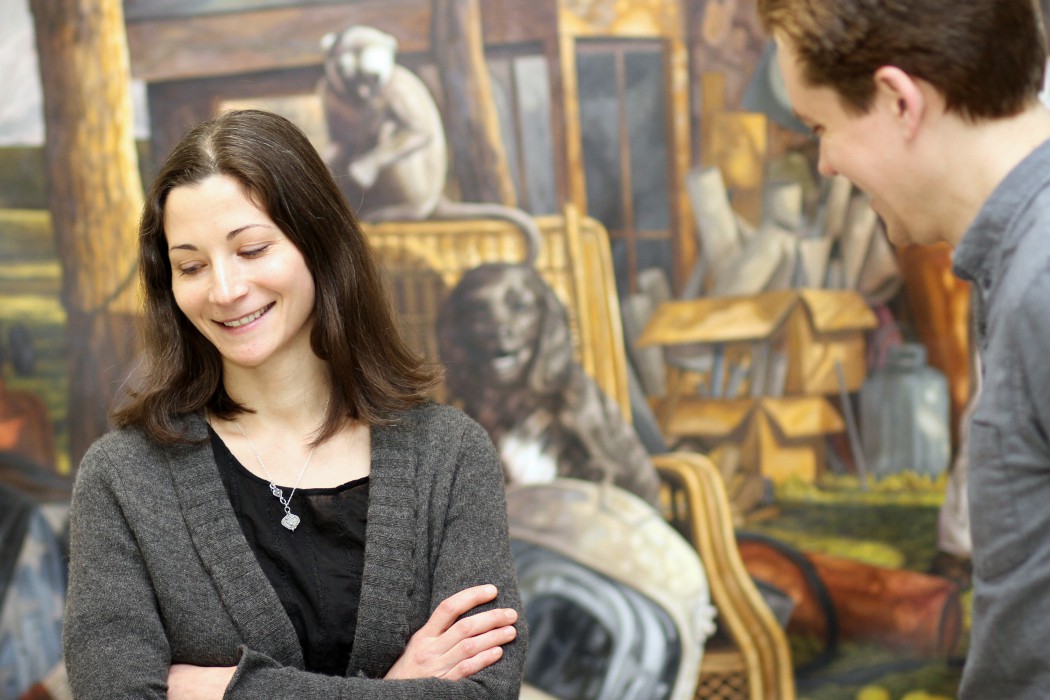 Jessica Mohl, an artist who creates metal work and jewelry, talks with her husband, Damon, after the reception. 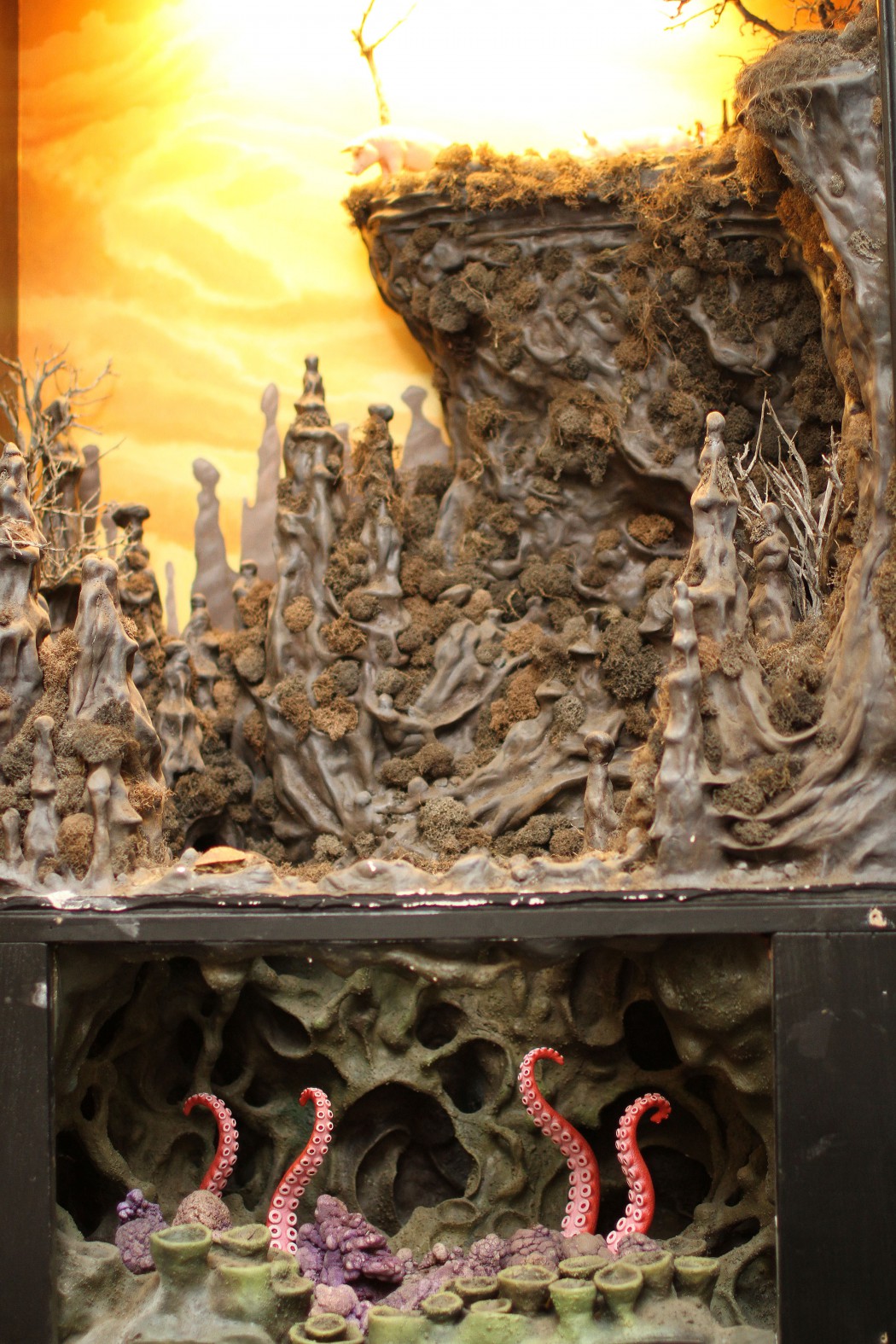 One of the miniature sets in Mohl's films occupies a corner of his office. 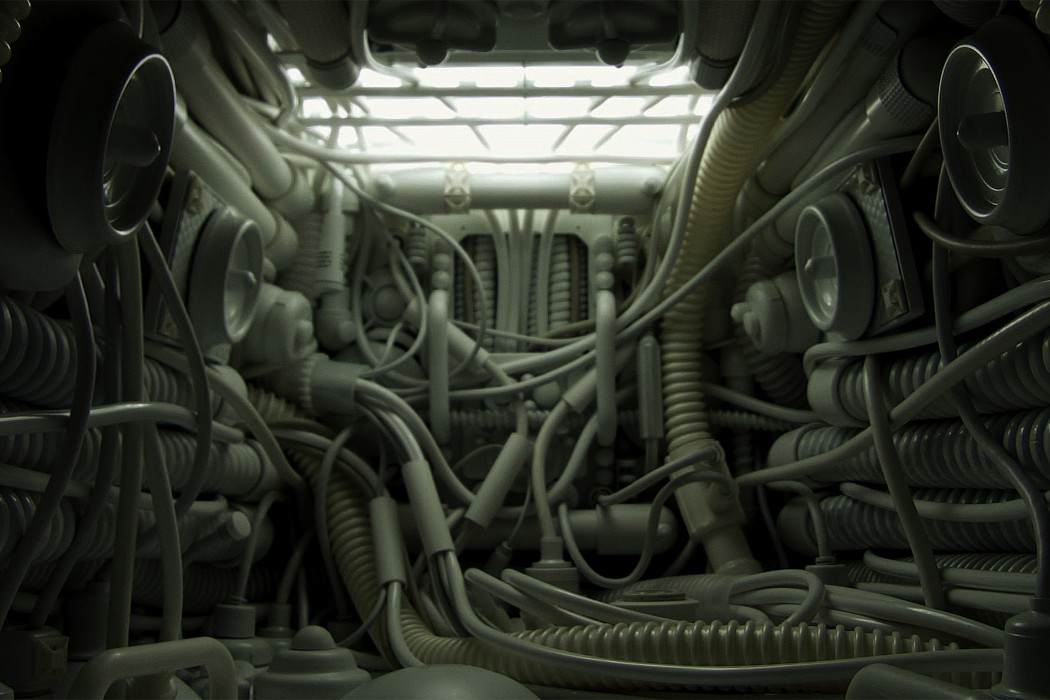 A scene from "The Mysterious Disappearance of the Town's Last Resident." 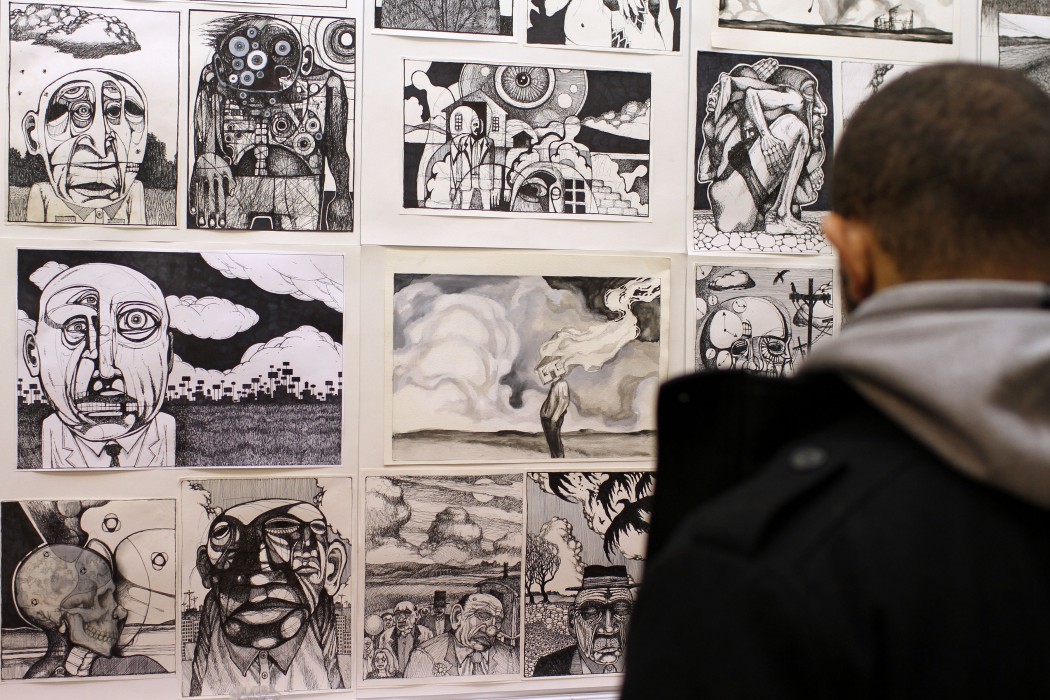 A student looks over some of the professor and filmmaker's drawings. 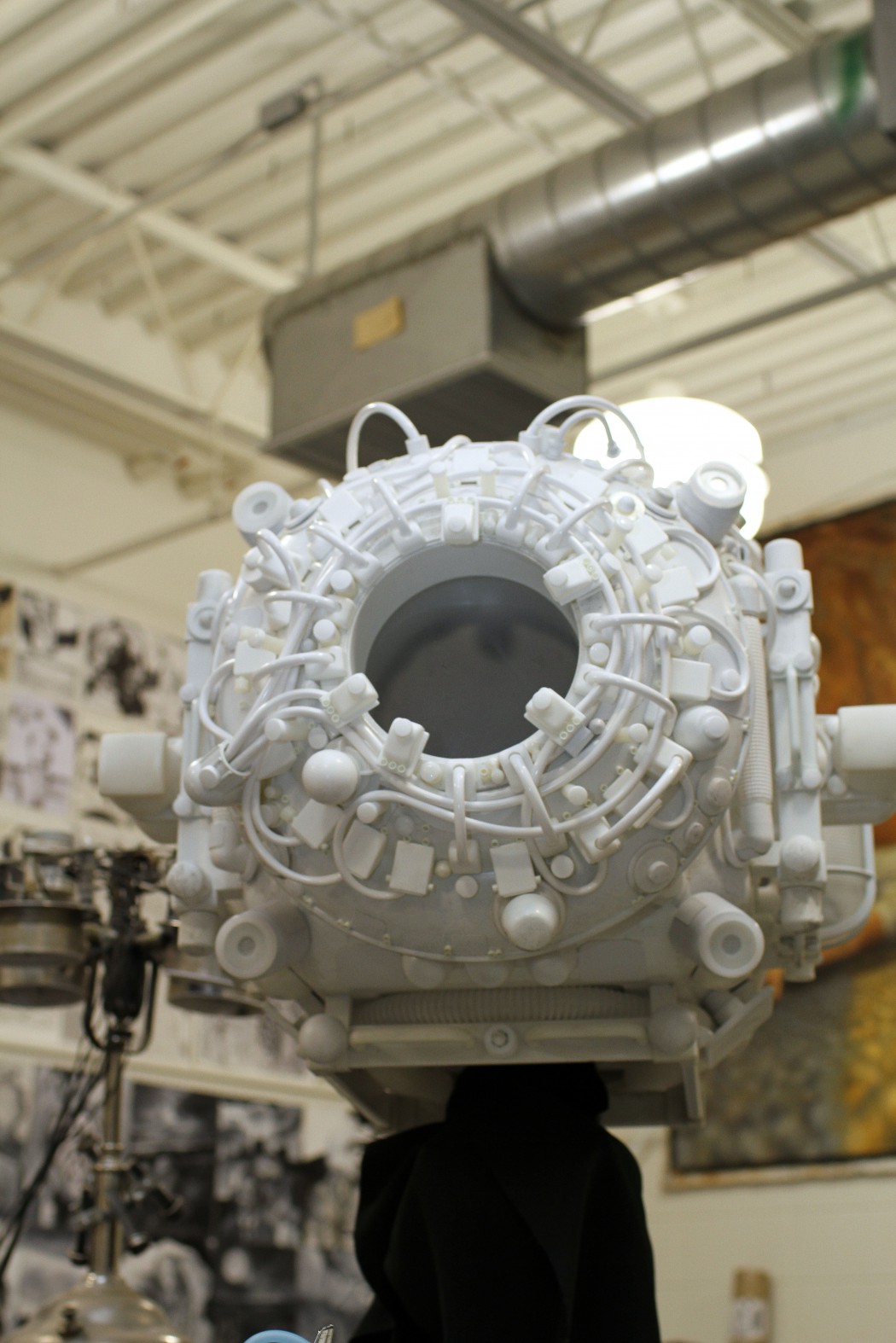 Another set from "The Mysterious Disappearance of the Town's Last Resident," and just about the size of a cat carrier. 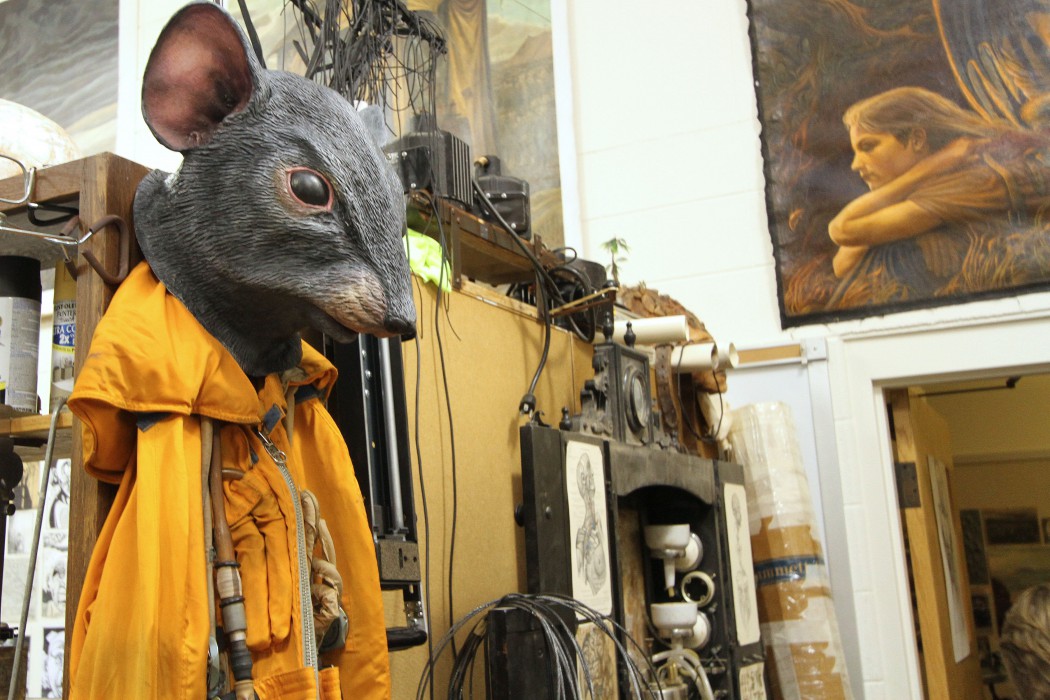 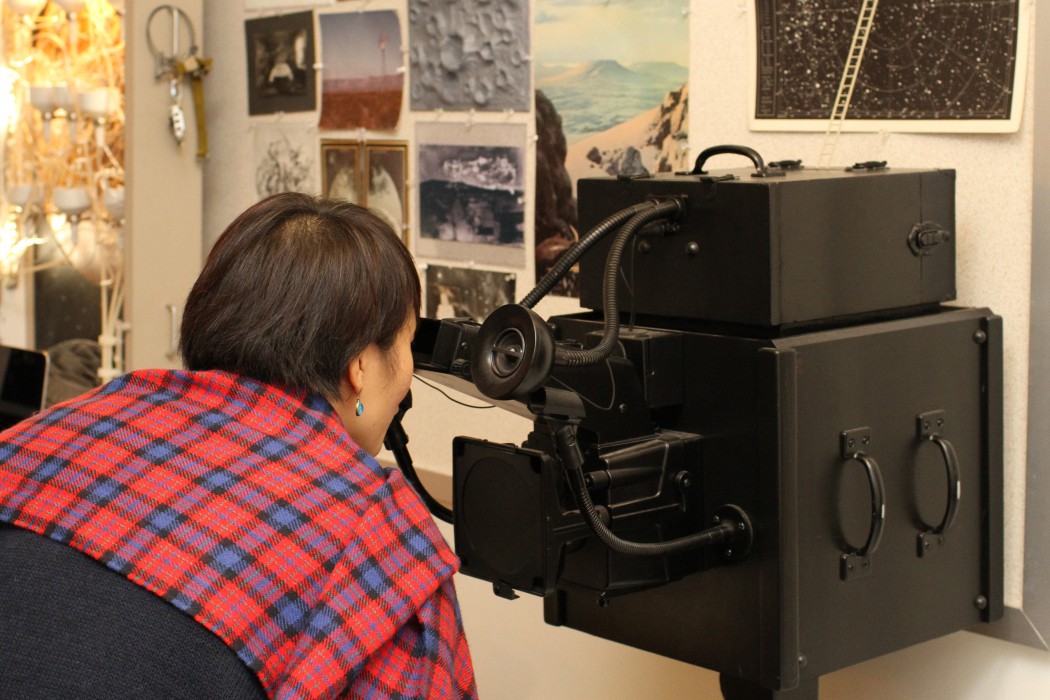 History and Chinese language Professor Qian Pullen looks into the small viewer that holds all six scenes from "The Forest."

Professor Damon Mohl’s films have earned awards at film festivals across the nation and around the world. Last Tuesday the Wabash community enjoyed a glimpse of why.

The screening of five of Mohl’s films in Korb Hall and the tour of his studio in the Fine Arts Center drew a large crowd of faculty, students, and members of the Crawfordsville community eager to see not only the films, but also how the first-year Wabash professor of art makes them.

“When I saw the email, I knew it was something I just had to come see,” said Colin Rinne ’18. “I thought the landscapes were incredibly intimate, the different drawings and videos that I saw. There was so much depth in it, and the light in it was really cool. There seemed that there was so much more to it under the surface.”

“I like to build sets—I want to construct a whole world,” Mohl once told a reporter during his grad student days at Colorado University-Boulder. Visitors to his studio Tuesday stepped into those worlds, and if their enthusiastic response is an accurate measure, Mohl’s multimedia artistry and teaching hold great promise for the art department’s impact across campus.

“I am definitely looking forward to collaborations with Wabash faculty and students,” Mohl said.

Tuesday’s screening opened with The Dust Machine Variation, which Mohl created over three years while pursuing his MFA. It includes two life-sized sets and more than 12 miniature sets. A version of this film was nominated for a 2011 Student Academy Award.

The Forest, a two-minute, 40-second wonder, was shot entirely on a 12-inch rotating stage containing six miniature diorama scenes. Each scene is but six inches wide and three and one-half inches deep, yet the film evokes a feeling of being in an immense woods. Mohl said the work was influenced by philosopher Gaston Bachelard and his phrase “inner immensity.”

The Diver, a “funny yet dark” piece, was the Audience Favorite Animated Film at the 2013 Moondance International Film Festival. It examines “the inner life of an inanimate object”—a plastic toy diver. The Diver won the Best Domestic Short film at the Autumn Shorts Festival in Kentucky, and was named “one of the best” of the Edinburgh Short Film Festival in 2013, among other honors.

The Mysterious Disappearance of the Town’s Last Resident places a cat in the vestiges of Bodie, CA, a gold-mining ghost town with a violent past. “The remnants of this establishment are preserved in their eternal state of arrested decay,” Mohl said. “It serves as a perfect setting for a short story about a mysterious disappearance.”

The final work presented, The Anatomical Universe, examines the life of a man named Edward Hillcot. It premiered in September at the Aberdeen Film Festival in Scotland and begins with this quote from Charles Dickens: “A wonderful fact to reflect upon, that every human creature is constituted to be that profound secret and mystery to every other.”

Mohl said he watches “a lot of movies,” but his greatest influences in graduate school were Andrei Tarkovksy’s Stalker and the works of Werner Herzog. Herzog actually viewed Mohl’s The Dust Machine in 2010 at the Conference for World Affairs. As Mohl told ColoradoDaily.com: “That was the highlight of grad school!”

Mohl’s wife, Jessica, is also an artist, creating metal work, jewelry, and combining metal and drawing in silverpoint drawings. The couple presented their work together earlier this year in their exhibit “Narrative Forms” at The Muse gallery in Longmont, CO.

Mohl is Byron K. Trippet Assistant Professor of Art at Wabash. His classes include painting, design, drawing, and “new and expanded media,” a course likely to be renamed filmmaking next year. Many of his films can be viewed online at: www.damonmohl.com