My father died more than 15 years ago, but I hear his voice every day.

I don’t mean that I hear its exact tone or timbre, of course. But I do hear, echoing in my own mind and voice, his bluntness, his way of not pussyfooting around but going directly at a thing. “No more bullshit” and the even shorter “Enough bullshit” were two of his favorite phrases.

In appearance he was a no-nonsense, balding bulldog of a man with full cheeks and hanging jowls, and when I first saw a picture of Churchill in my schoolbook, I momentarily believed that my father and the Allied leader were one and the same. (Not that it would have surprised me to find out that the man I sat next to at dinner had also led Great Britain through the war.) When I, as a young writer, whined to him once about the difficulties of my chosen profession, he spelled out this single word of advice: “W-O-R-K.” Of course this infuriated me at the time, though it aptly summarizes my attitude toward my own job today.

My own 20s were spent railing against my fate, feeling misunderstood, unclear on why the world didn’t appreciate my genius. To support myself while I wrote my big, clunky (and ultimately unpublished) novels, I worked as a carpenter, bookstore clerk, and substitute teacher—jobs that left my father scratching his simian head, unable to see a reflection of himself in my stubbornness to succeed on my own terms. We began to reconcile after I turned 30, but then, at the much-too-young age of 55, he learned he was terminally ill. He cut even that whopper of a diagnosis down to size in his characteristic manner. He spent his last weeks writing letters to friends, settling his business affairs, and making sure my mother would be taken care of. And when she tried to get him to slow down, he barked, “I’ll have plenty of time to rest soon enough.” He brushed aside the efforts of well-meaning friends to comfort him with religion, ranking God fairly high on the list of illusions he didn’t have time for.

Near the end of his life, he hadn’t said anything coherent for days, lost in the fog of morphine. He was lying in the hospice bed in the living room with a view of the bird feeders, and I was sitting in a chair by the foot of his bed doing what writers do: taking notes on what was happening in my life. No doubt there was something seedy, and possibly immoral, about writing about my father’s last moments. But there I was, a habitual chronicler habitually chronicling. Lost in that activity, I didn’t notice when he woke up, until he barked at me: “Make sure you get the facts down.”

Which I did and have continued to try to do.

The book I was working on at the time of his death was a nature book, leaning heavily on Henry David Thoreau. But as his death began to dominate the pages of that book, my father kicked Thoreau out the door. That book, which would become my first published work, began flowery and full of quotations, but grew more blunt as it went on. The central irony of my literary life is that I made my name on his dead body, and that I found my voice just as he lost his forever. That my mature writing voice carries echoes of his is hardly a surprise.

As I grow older, closing in on the age he was when he died and now a father myself, I think more and more about this gift my father gave me. In some ways I still define myself against him. He had plenty of flaws: He was incapable of navigating any complex emotional terrain, his temper could be wild, and he too often reached for the bottle when not W-O-R-King. There were deep reasons for this, among them the fact that his own father died when he was six, and he had no model to help him along. I was luckier than that. I had a good, if far from perfect, model.

We are very different men: He was a businessman who sold textile machinery, and I am a writer and professor. But when I take a break from professing and the long-winded sentences that go with it, I find myself returning to his blunt ways. “No More Bullshit,” says the sign that hangs over my desk as I type today.

This attitude permeates my reading as well as my writing. The writers I admire tend toward the common-sensical and direct, not the lyric and airy. While I had a youthful infatuation with Dostoyevsky, and still have long-standing relationships with Thoreau and Montaigne, the other group of writers and politicians I admire are blunt men of action, foregoing the theoretical for the actual. These qualities are embodied in the 18th-century English writer Samuel Johnson, who, when frustrated by a philosopher’s argument against the possibility of motion, stood up and kicked the man’s chair and said, “I refute it thusly.” Johnson also had little tolerance for fancy language, like those who called fish “the scaly breed.”

Two 20th-century writers—Wallace Stegner and Bernard DeVoto—also shared this hardheadedness, as well as a tendency toward workaholism, the former once comparing the latter to a beaver that needed to keep chewing lest its teeth grow so long it self-impaled. Like these men, and like my father, I have found something close to satisfaction, if not salvation, in W-O-R-K.

As is true with many businessmen, the vernacular of the military and of sports often leaked into my father’s words. Words like attack, charge, and blast constantly cropped up. A history major, he enjoyed the language of great battles, of trumpets, and smoke. It was a tendency I sometimes mocked. By the time I was a teenager I could do a pretty good impression of him, huffing up my chest and deepening my voice. Later, in college, while hunting through the stacks of the library, I stumbled upon Theodore Roosevelt’s most famous essay, “The Strenuous Life,” and reading it recognized exhortations that peppered my childhood:

I wish to preach, not the doctrine of ignoble ease, but the doctrine of the strenuous life, the life of toil and effort, of labor and strife; to preach that highest form of success that comes, not to the man who desires mere easy peace, but to the man who does not shrink from danger, from hardship, or from bitter toil, and who out of these wins the splendid ultimate triumph.

This ultimate triumph can’t be gained without “virile qualities necessary to win in the stern strife of actual life.” To the modern ear, Roosevelt can sound pompous, comical, sexist, racist, dangerous, even psychopathic, but there is still no denying the bristling energy—a contagious energy, an energy like the tide or, more accurately, like a waterfall. When I first read the words, I, of course, heard them spoken in my father’s gruff voice.

One thing that would have saddened my father, and that saddens me, is that the mantle of bluntness has been seized by the conservative right, many of whom fancy themselves straight-shooting truth-sayers. Of course no party or wing has a monopoly on this quality, and my father was that anachronistic thing, a true independent who voted for, among others, Kennedy, Carter, Reagan, Michael Dukakis, and Ross Perot. Hemingway wrote that every writer needs a “bullshit detector,” and it’s a device that comes in handy in the nonliterary world as well. My father was wary—not just of bunk, but of all parties, sects, certainties, and answers, anything pat and settled, anyone unable to adapt.

DeVoto believed that the only honest attitude toward life was an ad hoc one, that each and every situation should be judged not by some stiff and preestablished philosophy, but on its particulars, which will, of course, be different than every other situation. “Keep your options open” was one of my father’s few pieces of advice to me. He wasn’t suggesting that I not commit to things—hardly!—just advising me to be aware of the way that the world is always shifting, the way that, as soon as you say “things are this way,” they turn another.

This skepticism was balanced in him, as it is in me and in most of us, by other more exuberant qualities. He loved birds, booze, and the Red Sox, and so do I. But the helium of enthusiasm was always anchored by something solid, heavy, and hard, and today it is that anchor, or foundation, which I celebrate. While he believed that the world is moving, and that therefore we must move with it, he also knew there were times for staying still, times when the self was to be trusted no matter what the world said. To accomplish this requires seeing through the shams, delusions, opinions, and, yes, bullshit that so often passes for truth. To accomplish this requires planting one’s feet solidly on the ground and saying a thing directly.

My father taught me to be skeptical, and that includes being skeptical of a merely reflexive bluntness, a tendency to cut others down while cutting to the quick. I will watch for that. But I will also continue to appreciate the joy of going right at a thing, of brushing cobwebs aside and charging ahead. I will never actually hear his voice again, I know that, and even if I could I would understand that it is not flawless. But while that voice provides no answers and no certainty, I will take its counsel nonetheless. It may not be a perfect voice, but it’s a good one. And I plan on listening to it until I, like him, lie quiet.

—from A Man’s Life: An Ongoing Conversation About What it Means to be A Man in the 21st Century, WM Fall 2011 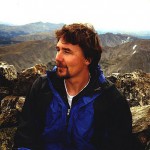 David Gessner is the author of six books, including Sick of Nature, The Prophet of Dry Hill, and Return of the Osprey, which was chosen by the Boston Globe as one of the top 10 nonfiction books of the year. In 2006 he won a Pushcart Prize; in 2007 he won the John Burroughs Award for Best Natural History Essay; and in 2008 his essay “The Dreamer Does Not Exist,” was chosen for The Best American Nonrequired Reading. He is currently an associate professor at the University of North Carolina at Wilmington, where he edits the national literary journal, Ecotone.