My father shot the elk—a 16-point bull weighing more than 500 pounds—high in the Cascade Mountains. This was in November, when ice ringed the lakes, frost sparkled in the ditches, and every breath hung around you like a scarf. After he gutted the animal, hauled it into his pickup, and drove the three hours home, he felt safe leaving the carcass in our unfinished garage, knowing that the meat wouldn’t spoil.

He was working as a lawyer at the time—and the next morning, when he was due in court, he scrubbed the blood from his hands, buttoned himself tightly into a suit, kissed my mother goodbye, and told her he would be back later that evening to dress the elk.

Plans changed. The pressure system shifted. A warm wind blew off the ocean, across Oregon, and shook the trees, breathed through the windows of the courtroom and chased my father to the phone when the judge called for a recess. “You need to dress the elk,” my father told my mother. Otherwise the meat would thaw and spoil.

Not only is my mother a small woman—only 5’ 2’’, someone who would have trouble wrestling with an elk carcass on the best of days—but at this time she was also six months pregnant, and I was the baby in her belly.

She managed all the same. I imagine one hand wielding a boning knife, wrapping the meat in butcher paper and stacking it in our deep freeze, while the other hand cradled her belly, the weight of me.

We hear every day about how pregnant women should avoid alcohol, cigarettes, fish—about how they should drink gallons of orange juice and choke down supplemental vitamins, every swallow shaping the baby inside them. I like to think that, in the hurried recklessness of that November afternoon, some of the elk blood soaked through my mother’s skin—and siphoned through our umbilical cord—into me.

As a boy, I would roll out of bed and pull the blinds to reveal the jagged incisors of the Cascades. It was a childhood spent ducking under barbed wire fences, chasing jack rabbits with BB guns, exploring lava tubes, tearing through pine forests on dirt bikes.

We spent our vacations in the mountains or desert. I remember waking up in the bed of my father’s pickup with elk bugling in the distance and fog swirling through the big firs. I remember wading the Metolius, fighting the pull of the current, whipping my rod back and forth, hoping to hook a brown trout. I remember clawing up petrified wood, fist-sized agates, thunder eggs that, once split open, revealed their violet crystal cores.

I like to think that if my own body split open, the core of me would be reddened by elk blood, seasoned by sage, dusted with alkali. I like to think that place, the wilds of Oregon, created me, like the broken-down particles of food that once sustained and fashioned me in my mother’s belly.

Many years later, when my wife was pregnant with my son, we fretted over her diet, shopping at the co-op, buying grass-fed beef, pesticide-free greens, and (lots and lots of) organic chocolate. We thought constantly about all of those cells aligning, organs forming. And when my son was born, our concerns continued, as we played classical music, read Dr. Seuss books, and fitted together puzzles, wanting him to be the smartest, the healthiest, taking every precaution with helmets, five-point safety harnesses, gates for the stairs, and fences for the yard.

Not all at once, but gradually I found myself annoyed by the constant phobia and helicopter parenting advocated by so many magazines and TV programs today. And I began to reflect on my own childhood, the Huck Finn freedom of it. How I would wander our 36 acres of land alone for hours. How I would fire guns and throw knives and chain-saw logs and hammer together treehouses without supervision. I was taught to be independent—and I was educated, in that freedom, by banged-up knees, wrecks on dirt bikes, fearful encounters with rattlesnakes.

Today I make my living as both a writer and a professor, and when I look to my students, I see young men who often prefer to be inside (playing video games or updating their status on Face-book), who take few risks in their lives or education (chasing practical careers over dreams), who ask questions like “How do I get an A?” (instead of querying the material out of genuine curiosity).

I can’t say for sure, but I suspect that this culture of fear—where parents wring their hands over kneepads and soft-edged playground equipment—and the quiet, regulated sameness of the suburbs—where so many of them grew up—might have something to do with their behavior.

And this is the very situation in which I have placed my son.

Not long ago, my family stayed for 10 days in Jackson Hole. The violent upthrust of the Tetons —so different from the rolling hills of Iowa, where I now live—made my son’s eyes widen with wonder. The splintery cabin and mildewy tents we slept in made him dream aloud about cowboys and grizzly bears. We hiked rocky trails, sank into hot springs, canoed lakes, and crept near moose and elk. He whittled a stick with my knife and didn’t cut himself once. He stepped to the edge of a cliff to take in the view and I didn’t grab him by the elbow. He tripped on a trail and cut his knee and I stood nearby until he was done crying, then I messed his hair and offered him a drink of water. I don’t think either of us had ever been happier.

Since then I have resolved that, whenever I can —a weekend of camping, an afternoon at the lake—I will make certain my son falls asleep sunburned, muddy, and completely exhausted. I will make him feel an awe for nature, the thrill of independence. Because when we think about the substance of our young men—the glowing core of them—what we need in these painfully safe, compliant times is a little more blood, a little more dirt, a little more wildness.

—from A Man’s Life: An Ongoing Conversation About What it Means to be A Man in the 21st Century, WM Winter 2011 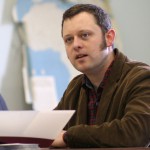 Ben Percy is the author of the short story collections Refresh, Refresh (whose title story won the Plimpton and Pushcart Prizes) and The Language of Elk, a contributor to Esquire, and assistant professor in the MFA program at Iowa State University. He was a visiting writer-in-residence at Wabash last Spring, and his first novel, The Wilding, was published in September.