Richard Paige — He drew me in with a well-emphasized have.

Listening to Brent Bolick ’91 talk about his life in and around Florida, those words confidently paint a picture of a guy who likes where he is.

“I wanted to be a lobbyist,” said Bolick, the son of a lobbyist, when asked if he’d planned on a career in billboards. “It seemed to me that most of the lobbyists I’d come in contact with through my father were lawyers, so I applied to law school.” 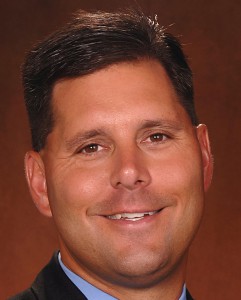 Brent Bolick ’91 is the president of Clear Channel Outdoor advertising in Jacksonville, Fla.

There was just one hurdle for Bolick. “I had very average LSAT scores.”

Undaunted, he went to work right out of college on Steve Goldsmith’s mayoral campaign in Indianapolis. That led to a fundraising gig with U.S. Sen. Dan Coats and his 1992 re-election efforts.

Bolick passed on an opportunity to work full-time with the Coats local administrative staff and ended up working at a Carmel landscape company with more than a handful of recent grads.

“They gave us the flexibility to leave and interview when we needed to,” Bolick said, “and they loved us because we had clean driving records and could communicate with customers.”

He did a stint with Sue Anne Gilroy’s secretary of state campaign in 1994 before settling into a public affairs position with IndyGo, the regional transit authority.

From there, he took a chance with Clear Channel Outdoor, worked his way up, moved to Florida to pursue administrative opportunities, eventually rising to president and overseeing 26 people in his Northwest Florida region.

Bolick feels his Wabash education gave him the flexibility to handle whatever challenge awaits.

“Liberal arts means you know enough about everything to be dangerous, but not enough to be an expert,” laughed the political science major. “Because I dabbled in so many things, it makes it so much easier to shift gears in my world, where you may talk to a city councilman downtown, a landowner over here and a sales rep in the office. It’s like handling all of the disciplines. It’s a big snowball of everything.”

While his primary focus as president is to work with community leaders to provide for sustainable growth and consistency of regulation within the industry, one of the benefits of his multi-faceted approach was to learn all aspects of his business.

“To be able to shift gears from real estate to sales to finance to operations is an advantage,” Bolick said. “It was interesting to learn the other sides of the business and how it all fit together.”

While the digital age has affected many, including game-changing developments in the billboard business itself, one thing still ties him to his college days. He’s an old-school note taker.

“I can’t imagine what it’s like there now,” he said. “We didn’t even have computers. I think my last year there was when they opened the first computer lab in the library. Everyone takes notes on laptops or tablets and I’m still taking notes the way I was at Wabash: outlines, bullet points, arrows back. It’s amazing how much more wired things are, how much more tech savvy kids are now.”

What is your favorite Wabash tradition?
Monon Bell. We were 0-4 when I was there, so I kept going back until we won one, which we finally did. That’s where I’m able to connect with other alums. The tough part of living down here is just how easy it was to stay connected by going to that one game.

Success and failure are a part of life. To this point, what has been your favorite mistake?
Not taking that job with Sen. Coats in Indianapolis. It was lesson about humility and a hard way to learn it.

If you could cook one meal, what would it be?
Steak and shrimp

If you could give your 10-year-old self a piece of advice, what would it be?
Oh, there is so much. Self-esteem and being comfortable in your own skin would be where I’d start.

If you have a personal credo, what is it?
If you start something, finish it.

If in your dreams you could have created one great piece of art – painting, song, sculpture, prose, etc. – by any other person, what would it be?
I have no idea. I’m not an artsy guy. I was always fond of Beethoven’s Fifth Symphony.

If a picture is worth a thousand words, what are you doing in that picture?
With any luck, I’m retired and it’s a big family portrait.

If you could wish for one thing in your future, what would it be?
Do the best I can to get my kids through high school and college and off on their own. Hopefully, you did it the right way. I wish there was a guidebook, but there isn’t.