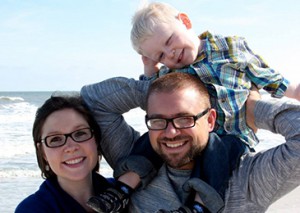 Richard Paige – This most recent winter storm makes me wish I were in Jason Siegel’s shoes.

Ten days ago he and I were steps away from the Atlantic Ocean sharing the joys of a sunny, 80-degree day in Jacksonville, Fla.  The snowfall blanketing campus today is not a reasonable facsimile for a white-sand beach.

“When you move here, everybody, says, ‘You are going to miss the seasons.’ I don’t,” he said laughing loudly.  “I enjoy the 80-degree weather in December.”

Jason is a resident at Jacksonville’s Mayo Clinic.  Four years as a biology major with a chemistry and math minor propelled him to medical school at IU before earning a residency at one of the Southeast’s most reputable medical institutions.

His focus is neurology – disorders of the nervous system.  “It’s not neurosurgery,” Siegel said.  “Neurosurgery is a little sexier, I suppose, but we deal with probably 90-plus percent of the neurological diseases.”

Siegel’s dreams of being a doctor date back to childhood.  The neurology came a bit later.

“I always liked the sciences and when you are a little kid and you do well in school, you are either going to be a doctor, lawyer or astronaut,” laughed Siegel.  “I love neurology.  There was just something that fit.  It’s a very methodical discipline.  You are testing so many different systems.  It’s like a big puzzle.”

I asked Jason, now midway through his residency, what surprised him most about the medical profession, and he didn’t mention long hours of study, patient care or the rigors of residency.  He mentioned the grunt work – transcribing notes, putting in orders, calling nurses.  The stuff you never see on television.

“I spend a lot of time at a computer typing notes, putting in orders, a lot of time on the phone calling nursing homes and nurses,” said Siegel.  “That part, I wasn’t ready for.  I never watch medical shows on TV, but I caught an episode of Grey’s Anatomy a while back and you never see the any of the doctors writing progress notes or admission notes.  That’s something that isn’t recognized…just how much time we sit at a computer.”

When it comes to prepping for a career in medicine, Siegel had these thoughts:

My friends who went to bigger state schools had a little advantage over me in med school at first because you sit in a big lecture hall and you get PowerPoint lectures and you have to memorize them.  It’s straight memorization of notes and textbooks. There is not a ton of critical thinking.

At Wabash it’s the exact opposite, even in the sciences.  There is a lot of discussion and interaction.  Don’t get me wrong, Biology 111 and 112 at Wabash was a lot of memorization, but there is a lot of compare and contrast.  You have to think critically.  There wasn’t a lot of that in the first two years of medical school.

But in years three and four, and definitely in residency moving forward, you don’t do that.  It’s taking a patient, figuring out what’s happened, solving the puzzle and communicating that plan with the patient.  You can be very good at memorizing textbooks, but you have to be good at making connections.  That is where Wabash helped me the most.  Thinking critically is something I do every day.

In trying to take care of people – living humanely – I’ve found there is a bit of resistance to people listening to doctors in general.  Part of that resistance is because when you go to a doctor, you are bearing a lot, you are very vulnerable.  Sometimes we don’t appreciate that and deal with it very well.  Having empathy for what the patient is going through, whether it’s someone helping their mom with a stroke or someone who’s just been diagnosed with Lou Gehrig’s Disease, the undergraduate education I’ve seen at other places doesn’t prepare students as well as what I had at Wabash.

What is your favorite Wabash tradition?

My favorite week every year is Monon Bell week.  The campus just has a different energy.  The freshmen staying up ringing the Bell, guarding the Bell.  That’s my favorite tradition, the Monon Bell festivities.

If you could cook one meal, what would it be?

I’m thinking of two things.  One is a very tender New York Strip steak – juicy and pink in the middle – just perfect.  The other thing is a perfect batch of chocolate chip cookies.  I love cookies.  If I could make my grandma’s cookies – they were always soft and gooey, chocolate melted just right when they come out of the oven.  If I could do that, I’d be pretty happy.

If you could give your 10-year-old self a piece of advice, what would it be?

I would tell him to start figuring out who he is as soon as he can.  Figure out what you are good at, and what you are not, as early as you can and let that guide you through big decisions in life.

If you have a personal credo, what is it?

There is a Greek temple for Apollo.  There are three things inscribed on it: know thyself, all things in moderation, and in essence, know that you can’t control everything.  Those are three things that have guided me since high school and I’m most cognizant of when making decisions.

If in your dreams you could have  created one great piece of art – painting, song, sculpture, prose, etc. – by any other person, what would it be?

Oh man…My favorite piece of art is a song called “Jupiter” by Gustav Holst, a classical composer who played piano and trombone.  He wrote a suite called “The Planets.” If I could have written “Jupiter” – it’s my favorite song ever – that would be something to put my name on.

If a picture is worth a thousand words, what are you doing in that picture?

I’m probably with my wife and son and we’re all laughing.

If you could wish for one thing in your future, what would it be?

Do people usually put that much thought into this? (laughs) I have to make sure this is right.  I want to make sure my kids are on the right path…figure out who they are, make good decisions and are happy and successful in life.