Jim Amidon — There was one second remaining on the scoreboard clock at Wabash’s Chadwick Court when freshman guard Ross Sponsler stepped to the line to attempt two free throws in a game the Little Giants led by a single point.

The Terre Haute North High School graduate calmly sunk both shots — just as he had 16 seconds earlier when Wabash led Denison University by just a point in a game the Little Giants desperately needed.

The freshman stood tall in both cases, scoring all four of the Little Giants last points in a North Coast Athletic Conference victory that snapped a two-game losing streak and helped erase memories of a miserable game earlier in the week against Rose-Hulman.

These Little Giants — these young, but talented players — will be fun to watch in the coming years.

There will be moments like in last Monday’s loss to Rose, when Wabash looks like a rag-tag group of freshmen and sophomores trying to learn how to play together at the college level.

But there also will be moments like last Saturday’s win over Denison when the full potential of these young basketball players is readily apparent. The Little Giants built a big lead against an experienced team led by an all-conference player, relinquished the lead, and then leaned on the rookies to eek out a much-needed NCAC victory.

Denison had cut the Wabash lead to just three points when Little Giant junior Andy Walsh buried a three-pointer to push the home team’s lead back to six points with nine minutes to play.

From that moment on, freshmen scored the final 17 points for Wabash. 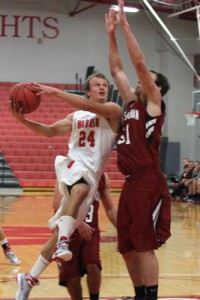 Sponsler scored 11 points in the final six minutes of his first game back after sitting out a few games with an injury.

Denison had taken a one-point lead late in the game. That’s when Southmont graduate, Austin Burton, who earned his first collegiate start, sunk a three-pointer. He later added a critical free throw and finished with eight points, three rebounds, and two assists.

By game’s end, freshmen and sophomores contributed 50 of Wabash’s 75 points and 23 of 41 rebounds.

Indeed, Coach Antoine Carpenter has a young Wabash basketball team. It might well be the youngest team to take the court for the Little Giants in decades.

But it is a very talented team. When Coach Carpenter can get his players to understand their roles, run the offense, and hustle on defense, they are very good and a joy to watch. The team’s seniors — Jordan Surenkamp, Evan Johnson, and Colten Craigen are doing a terrific job teaching the rookies the ropes. 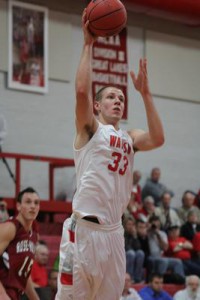 Purvlicis is a 6-7 forward with soft hands and good instincts around the basket.

Rookie center Marcus Kammrath stands 6-9 and is the team’s tallest player. As his defense improves, his minutes will increase, and he’ll soon be a powerful force in the paint. (He had six rebounds in just nine minutes.)

The rookie guards, Burton and Sponsler, are both hard-nosed players who bring toughness to the position. Both were well-coached in high school and it shows in their ability to handle the ball and take key shots in pressure-packed situations.

The sophomores have suddenly been cast in the roles of leaders. Oetting, a silky 6-7 forward, scored 15 points with seven boards in Saturday’s win. Hodges is still getting into basketball shape after football season, yet he’s contributing mightily as a leader.

In a season that’s just five games old, you don’t want to start talking about “next year.” But it is fun to imagine how good this team will be a year or two years from now.

I think these Little Giants are just talented and scrappy enough to surprise some of the league’s front-runners before this season ends. There will be growing pains along the way, but the upside of this team is exciting.

Coach Carpenter will get a sense of the team’s toughness soon enough. Wabash plays five of its next six games on the road, including a trip to always-tough Wooster.

Plan now, though, to check out this promising young team when it hosts Hanover on December 17. If you are a basketball fan, you will like what you see, and you, too, will witness the beginning of a new era of Wabash basketball.