Jim Amidon — Wabash College Cross Country Coach Roger Busch had his team back at the Division III National Championships again this year. It’s the third straight year the Little Giants have qualified as a team for the national meet after top-20 finishes in 2010 and 2011. 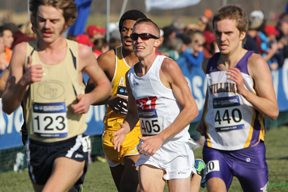 While traveling to Terre Haute where the meet was held, I was reminded of much longer drives to national championship races back when Coach Busch was running for Rob Johnson in mid-1990s. I made trips with those teams to Virginia, Pennsylvania, and Wisconsin during a stretch when Wabash captured four top-11 finishes in a row — capped by a third place finish in 1995.

Coach Busch’s young team — one senior, one junior, and five sophomores — ran brilliantly a week ago to take second place at the NCAA Great Lakes Regional.

Wabash didn’t fare as well last Saturday at the championships

The Little Giants placed 28th at the national meet. Sophomore Shane Hoerbert paced Wabash, but he was the team’s only runner to crack the top 100 individuals. 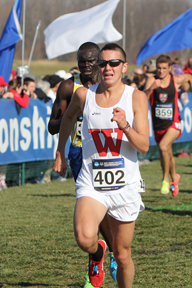 After the race, Coach Busch was disappointed. He knows his team is young and that nerves probably got the better of his runners, especially early in the race when a quick pace was set. The Little Giants lingered well back in the pack of almost 300 runners.

“We just never asserted ourselves,” the talented coach told me after the race. “We got out slowly and I expected our guys to make a move, but they never really did.”

Being a fierce competitor, Coach Busch didn’t want to use youth or inexperience as an excuse. He saw the same runners perform much better during earlier meets and he knows how much potential they have.

“At some point, even when you’re young, you have to start running to your potential and begin to assert yourself as a champion,” Busch said. “I think we’re at that point now — we need some guys to step up and learn how to compete in these big meets.”

I suspect Hoerbert and his teammates Nick Boyce, Billy McManus, Dalton Boyer, Daniel Hoover, and Jared Burris will use the indoor and outdoor track seasons to do exactly that — learn how to turn their potential into performance. Finishing second in the North Coast Athletic Conference and at the Great Lakes Regional proves the talent is there.

I remember Coach Busch’s sophomore year. He and Jeremy Wright and Scott Gall were brash young competitors whose second trip to the national championships didn’t go was well as they wanted. In fact, they ran well below their potential that year.

But that was the only time that happened for the rest of their careers at Wabash. Over the next two years, the team blitzed its competition in an unprecedented era of distance running success at Wabash.

They would go on to place fourth and third at the national championships. Perhaps even more impressive, they posted a perfect score at the 1995 Great Lakes Regional — Little Giants finished first through fifth for a score of 15, which is nearly impossible to accomplish in a race with more than 150 runners. 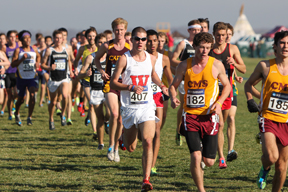 I suspect Coach Busch will use Saturday’s performance as a lesson on how to persevere through times of difficulty. He’ll talk to his runners about his own experiences at nationals when he was a sophomore and how the core group on that team dedicated itself to constant improvement.

Tagging along on Saturday was a lot of fun for me personally. It brought back fond memories from my time as Wabash’s sports information director. It also reminded me of just how great those Wabash teams of the early and mid-90s really were.

Will history repeat itself? Can Coach Busch drive his talented, but young team to heights of greatness?

I sure think so. After Saturday’s race was concluded, every single Wabash runner knew he hadn’t run his best race. Those guys realize that they can compete at a higher level.

Now the hard part begins. The weather has turned cold, but the Wabash cross country team knows now is the time when they have to begin preparations for next year. You’ll see them running in the morning and in the afternoon to log the miles they’ll need to become champions in the future.

It’s a safe bet this group will make a return to the national meet. And it’s also a safe bet that 20 years from now, someone like me will be looking back on last Saturday’s national championship as the point when the cross country program turned the corner.