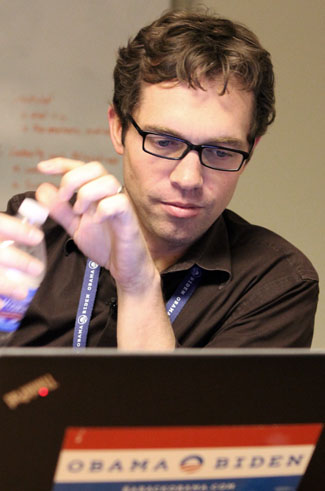 He shared stories, spoke of co-workers with great admiration and fondness, and often minimized his own contributions.

How many people can say they had a key hand in electing the President of the United States – twice? The St. Louis native and Wabash graduate can say just that.

Bird was a field organizer in 2008 orchestrating one of the campaign’s most important primary victories in South Carolina. He led the field effort in Ohio during the general election. After the 2008 Obama win, Bird worked for the Democratic Central Committee and then Organizing America. When it came time in 2011 to restart the Obama campaign Bird was on board and named the National Field Director.

He worked the election out of Obama’s Headquarters in downtown Chicago.

He compared the 2012 campaign to his Wabash education. “We knew we couldn’t run the same campaign,” he said Monday. “We had to rethink everything and that’s what Wabash guys do.”

The Wabash religion major and Harvard Divinity School graduate believes the President’s second term will be very different than his first. In 2008, Bird said, the President had to hire and appoint people to deal with the ecomonic crisis. Bird said the President can take a broader view organizing his leadership team now.

The sprawling headquarters was alive up until election day with 500-600 people working on the campaign. The staff now is down to 50 or so working on a legacy project to document the Obama ground strategy.

Personally times couldn’t be much better for Jeremy Bird. He married in 2010, lives in downtown Chicago, and will be in demand for future campaigns. He wants to continue community organizing work either for social issues or electing political candidates.

The Wabash website will feature an extensive video interview over the holidays on Bird’s success. He is expected to return to campus in the spring for a public talk about the campaign.

Adam Bowen did yeoman’s work getting lots of Jeremy on video for the upcoming feature. And it was fun for both of us to have Wabash freshman Derek Andre along to write a story about the experience for The Bachelor.