Jim Amidon — Writing about the Monon Bell Classic never gets old or boring. There are always incredible stories leading into the famed football game between Wabash and DePauw, and certainly the actual game provides plenty of its own.

The 119th meeting of the two liberal arts colleges was played on a picture-perfect day at Hollett Little Giant Stadium. Some 7,000 Wabash faithful packed the home stands — and all of the temporary seats — to cheer on the Little Giants to their fourth straight win over their archrivals.

Winning four in a row is tough sledding. Not since 1979 had a Wabash senior class swept all four games against DePauw. And a 23-0 shutout was the second blanking in the last three years.

After the crushing home loss to Oberlin the week before, the Wabash football team was bruised — physically and emotionally. The playoff hopes were dashed. The conference championship was lost. All that remained was the Monon Bell.

And that’s plenty of motivation for any red-blooded Wabash football player.

When interviewed all week by the media, Wabash’s seniors Weston Kitley, Chase Belton, Pat Clegg, and Austin Hodges spoke about the importance of winning the Bell Game and becoming only the 10th class in the 119-year history of the rivalry to sweep DePauw.

Those same seniors quietly talked about their concerns, too. They wondered if Wabash’s freshman and sophomore starters — about 10 in all — would understand the importance of the game. 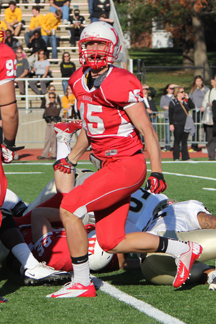 Tyler McCullen celebrates after a tackle.

When the freshmen were interviewed — guys like Tre Taylor, Justin Woods, and Tyler McCullen — they spoke in unison: they would play their hearts out for the seniors. The freshmen got it; they figured it out so perfectly. When the seniors’ other goals of going undefeated and winning the league title were gone, the freshmen players knew they HAD to do their part to win the Monon Bell. For the seniors.

When the ball was kicked off on Saturday with AXS TV on hand to share the rivalry with the rest of the country, Wabash played with nervous sloppiness. The freshmen were pressing. So were the seniors.

Wanting to win so badly and to avoid an upset in a second straight week created even more pressure. Add to that all the importance the College’s alumni place on winning against DePauw and it was easy to see why Wabash came out unfocused.

The offensive line was penalized repeatedly in the first and second quarters for holding and illegal motion. Those are penalties created by nerves.

But once Belton and Tyler Holmes found a rhythm — running and passing — the offense started to calm down. By game’s end, Kitley and his offensive line mates (including the rookies Taylor and tight end Darren Bost) helped Wabash put 275 rushing yards in the stat book.

On the other side of the ball, Hodges and fellow seniors Clegg and Jonathan Koop set the tone. Big hits, one after the other, and constant pressure on DePauw’s quarterbacks allowed the Tigers to cross mid-field only once in the entire game.

What impressed me most was the play of the rookies, who have been guided and mentored by the seniors and learned the important lessons of Monon Bell history.

McCullen was remarkable. So was Justin Woods, playing in his first Bell Game. Jon Laird made two huge catches.

The veterans played mightily, too. Nate Scola brought intensity. When DePauw was able to complete a pass, Scola and his fellow linebackers A.J. Akinribade and Cody Buresh brought the hammer.

After the sloppiness of the first half, Wabash calmed down. The defense roared and the offense pounded the Tigers into submission.

I’ve seen 30 Monon Bell Games in a row and each year I discover something different or unique about this famed rivalry, which is built on mutual respect and admiration among the rivals.

This year, I saw more keenly the passing on of tradition. It was more apparent how critical it is for seniors to teach the freshmen how to focus; how to play hard; how to treat every play in the Monon Bell Game as if it were your last.

While the Little Giants got poor marks for penalties, the team received straight A’s in the most important category: the teaching and learning of the greatness of the rivalry.

All of Wabash is proud of the seniors for capping their careers in such grand fashion. All of Wabash is equally proud of the players who participated in the Bell Game for the first time, and who so quickly figured out that winning or losing the Monon Bell lasts a lifetime.