Jim Amidon — When the League of Women Voters reached out to Wabash President Pat White about the College’s willingness to host a Candidate Forum, he quickly agreed to open up the Fine Arts Center.

For President White, it was an easy decision to say yes because of the neat connection to Wabash: Our first professor, Caleb Mills, founded the public school system in Indiana and served as the state’s second superintendent back in 1847. 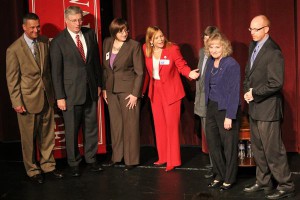 Organizers and participants in last week’s Forum pose for a photo before the event.

By any measure, the event was a huge success. The Montgomery County LWV, headed by Kathy Brown and staffed with a huge volunteer base, helped the state LWV get the word out and execute the Forum, which was attended by over 300 people and watched live in more than 400 locations.

Behind the scenes, literally dozens of people worked together, efficiently I might add, to make it look to visitors like the event was months in planning. In reality, we had two weeks to pull it off.

So how does a political forum that attracts media attention and attendees from across the state come off so smoothly?

It takes a campus — and then some — to host an event with so many moving parts (not to mention competing politics).

Once the Fine Arts Center’s Ball Theater was secured, we reached out to Eileen Bowen, who so beautifully manages the box office for all of the events in that building. But to suggest she simply runs the box office would be a huge understatement.

We leaned on Eileen for two solid weeks and by the time the Forum began at 5:30 Wednesday, she’d exchanged well over 50 emails with various organizers and planners. Working with the Indiana LWV leadership, Eileen carved up Ball Theater perfectly — seating Dr. Bennett’s staff on one side of the theater and Ms. Ritz’s staff on the other.

By 4 p.m. Wednesday, LWV volunteers were staffing tables with the names of ticket holders all perfectly organized. The collaboration between Eileen and the LWV was a thing to behold.

The theater’s scene designer, James Gross, got the stage ready with proper lighting and banners.

We also knew that our theater, which seats exactly 358 people, would not accommodate the demand for tickets. That meant we had to broadcast it and stream the feed live through the Wabash website.

For that, we leaned on Adam Bowen and his talented student workers in the Media Center. Adam and his students create all of the glorious event posters you see around the Wabash campus, but they also produce all of Wabash’s football games for live broadcast, as well as other important campus events. They manage hundreds of videos on the College’s YouTube channel.

But moving the Media Center equipment to backstage of Ball Theater was no easy task. The guys worked six hours to set up the equipment for the one-hour broadcast. It took another three hours to tear it all down.

If you tuned in, you would have been blown away by the quality of the broadcast and the professionalism with which it was accomplished.

Brent Harris, who manages our sports information and marketing office, was also called in for extra duty. Brent is a tech-whiz, so when we do live events like this, we often ask him to bring a truckload of sound equipment and make sure it works. He was also savvy enough to know that television news media would need sound feeds, so he made that a breeze, too.

(You only ever notice the quality of sound at an event when it’s bad. Needless to say, Brent always does it well.)

We enlisted student workers to help in the lobby and in the overflowing Fine Arts Center parking lot.

We asked Rich Woods, Wabash’s incredible director of safety and security, to help us make sure it was a safe environment for the candidates and the crowd. Rich enlisted some off-duty CPD officers, who helped us before, during, and after the Forum.

When Kathy Brown took to the lectern at 5:30 and the broadcast went live, the audience and Internet viewers likely had no clue that over 50 people worked very quietly behind the scenes to make it look so seamless and professional.

I’m guessing that virtually everyone in attendance took for granted the intricate details of coordination and collaboration.

But having planned and executed events like this at Wabash for a few decades, I know how much work — and how many people — it takes to make them happen. We’re blessed, both at Wabash and in Montgomery County, to have so many selfless, dedicated people willing to work together for the betterment of our community.