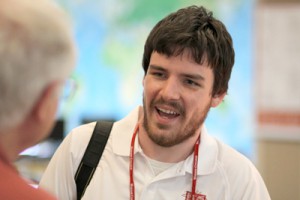 Ian Grant ’13—During the Scarlet Yarns recording sessions at this year’s Big Bash it was not uncommon for four or five of us—including Josh Mitchell ’13 (taping), Jimmy Kervan ’13, Ian MacDougall ’12, James Blaich ’14 (interviewing), and Steve Charles and myself (photographing) to all be listening to the same alumnus’s stories.

We gathered because we were intrigued. Cross-country hitchhikes with convicts and riding a horse while dressed as Lady Godiva for Homecoming are not commonly told tales.

During one of these sessions I was poised to snap a picture of an alumnus when he turned to me in surprise and said, “I feel like a celebrity.”

If a celebrity is a celebrated person, I suppose he was right.

Here are some of my favorite “celebrity” stories, a couple outrageous, another sort of amazing in its own right.

When I was here we had a tradition of streaking to Dean [Ben] Rogge’s house. Once there you had to ring the bell and wait for someone to answer the door. You always hoped it wouldn’t be Mrs. Rogge. I had a friend who decided that he wanted to do this.  So he stripped down, ran across campus, across town, and onto the Dean’s porch where, after hesitantly ringing the bell, Dean Rogge answered the door.  Naturally, after ringing the bell, he ran like hell, but it wasn’t enough to quite get away.  Mrs. Rogge asked the Dean who was at the door and all the Dean said was, “I’m not entirely certain, but I think I recognize his ass.”

This from Fred Obenchain ’62: 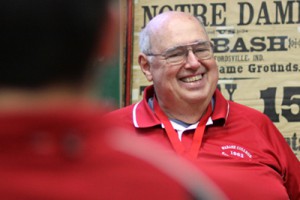 In the very first Homecoming queen contest that we had, my fraternity, Phi Delta Theta, was talking about assigning the task of Homecoming queen candidate to a freshman pledge and I stupidly spoke up in chapter and said I didn’t think it was a good idea to force a pledge to do that.  So the chapter unanimously decided that I got to be the candidate for Homecoming queen. I was Lady Godiva and I rode a white horse. My only regret in all that is that I only got second place. So that was a tremendous disappointment to me.

Finally, Dennis Harrell ’67 tried to hitchhike to Washington, D.C. over spring break but was dropped off, and subsequently stranded, in Washington, Pennsylvania:

We went out and hitched a ride again and we were dumped off at the entrance to the Pennsylvania Turnpike.  So you have to remember this is a Sunday morning, over spring break, two guys from Wabash not wearing Wabash clothing and thumbing a ride on the entrance to the Pennsylvania Turnpike.  A car comes along and stops and picks us up.  It happened to be [Professor] Jack Charles. He recognized us. Just two guys standing along the road in Pennsylvania on a Sunday morning, yet he knew who we were. I had taken only one class from him.

Ian Grant is an intern this summer with Wabash Magazine and the College’s Office of Communications and Marketing.