Howard W. Hewitt – Columbia, Ky. – Bill Luckey ’82 is the first to admit no one wants to hear about where you come from or how someone else operates when you’re in a top leadership position. 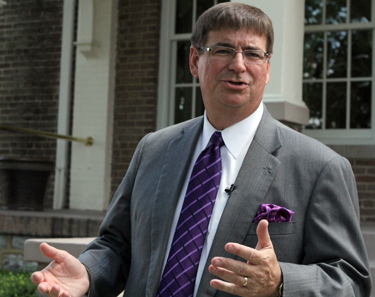 But the President of Lindsey Wilson College will admit his Wabash experience has profoundly influenced his leadership of the small private liberal arts college in rural Central Kentucky.

Luckey’s first job was at Lindsey Wilson. He became President at the age of 38 and today, at 51, leads a campus that has doubled enrollment, significantly increased faculty size and annual giving.

Lindsey Wilson was a two-year college when Luckey arrived in one of the poorest educated areas in the nation. The College’s graduation rate of just over 30 percent might seem shocking. But when its considered the rate was in single digits not many years ago, the turn around has been nothing short of remarkable.

Lindsey Wilson is a very different place than Wabash. The school takes students who may not have sterling academic credentials but through its liberal arts education creates leaders, teachers, and lawyers who are showing a loyalty not unlike former Little Giants.` 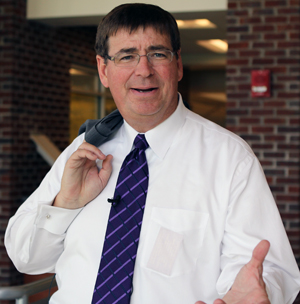 During a walking tour of campus Tuesday he shared how many of Wabash’s great professors of the 1980s influenced his life. He walked us through building after building constructed during his tenure. The school’s annual giving has gone from $1 million to more than $6 million annually. When faced with a key capital campaign President Lucky was told by professionals the College would raise less than $20 million. They went out and raised $56 million.

On a simpler level, a walk around campus encountered administrators, a few students and staff it was clear he’s a respected and loved leader.

Media Center Director Adam Bowen and I visited Luckey for a video profile which will be on the website this fall.

Student Listeners Celebrate Alumni
Made in the Shade