McClendon’s “Off 63rd” Premieres in Chicago 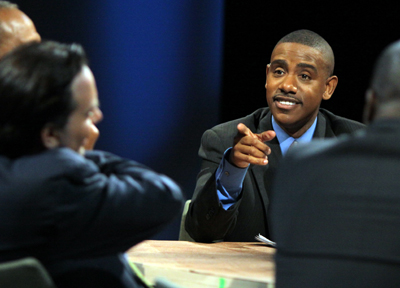 Steve Charles—An hour before the first show of his new public affairs series Off 63rd with Garrard McClendon on Chicago’s WYCC-TV 20 PBS affiliate, Dr. Garrard McClendon stands alone 10 feet in front of the camera, the flat screen behind him shimmering with the show’s logo. He’s running his lines one last time, warming up like a sprinter taking short practice starts out of the blocks.

He tries again, a little more emphasis on ‘nail.’

“This is Off 63rd—Chicago, from the beach to the burbs.”

The soundman aims and positions the mics. Then another practice run to make sure the teleprompter is working as it should. Fix the lighting. Then more waiting.

Garrard does his “AHH-nold” Schwarznegger impersonation, playfully flexing his biceps, then banters back and forth with one of the cameramen about friends they have in common in the business. The cameraman has worked with one of Garrard’s mentors. “A wonderful man, wonderful man,” Garrard says, glancing back at the camera.

Many Chicagoans know Garrard from his previous talk show, Garrard McClendon Live, which ran for two years on Chicago’s CLTV. More learned about him in the midst of personal tragedy—Garrard’s parents, Milton and Ruby, were murdered in October 2009. Even while grieving, Garrard publicly forgave the killers, an act even more remarkable because Garrard and his parents were very close. “I have forgiven the perpetrators,” he told WGN-TV in October 2009. “Do I want them caught? Of course I do. I want justice served. But I can’t live a productive life in constant pain.”

The killers were sentenced three months ago.

“Where do you sleep?” the cameraman jests.

It’s got all the tension of opening night in the theater, with every eye and every hope in the room focused on one man. Garrard tells me later that he uses this time to visualize the entire show, not unlike the way he envisioned each entire race from the starting line when he ran track at Wabash in the late 1980s.

“I know I can’t leave, so I think about the show, from the first minute all the way to the end.” 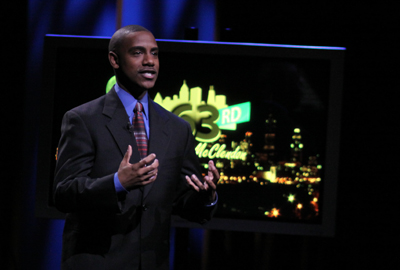 Getting the sound, the light, the lines and the look just right takes almost 15 minutes for this, the only pre-recorded part of the show. There will be no do-overs from here out. Off 63rd is live. And in 25 minutes that’s the way it will go from this studio on the campus of Kennedy-King College on the south side of Chicago to more than 250,000 viewers in the city.

Twenty minutes before the show, Garrard strides to the observation room to greet his guests and some friends. With 15 minutes to go he walks back out to the set, going over notes at the desk with a marker in his hand as guests are brought out to get the lighting, sound, and seating just right.

First up will be the day’s breaking news: Rahm Emanuel is back on the ballot in the Chicago mayoral race, thanks to the state’s supreme court, and Garrard will lead comedian and radio host George Willborn and political commentator and 2010 Republican candidate for governor Dan Proft in a debate on the issue.

Mayoral candidate William “Dock” Walls walks out to the set for a lighting and sound check, Garrard greets him warmly before the candidate departs for the green room, to return in the show’s second half.

Five minutes before the show, everyone’s in place. A few last minute makeup touch-ups for the Willborn and Proft. Garrard’s producer, Allison Hunter, steps to the table. She leans over him, speaking a few quiet words, perhaps reassurance. Then they smile, laugh, clearly energized as Allison’s idea, and this dream they’ve shared the past few months, is about to go live into the world.

“I just want to put this out there,” she calls out to the crew as she walks off the set. “I want to thank you all for a great show. I want to put this out there now. This one has been written, that work has been done. Thank you.” It’s Garrard’s visualization technique provided en masse for the professionals behind all this high-end technology—the mix of TV journeymen and novices who have to get everything just right for the program to come off as seamless as it must.

Two minutes. Then one. Floor Director Lathea Smyles steps up to the set.

“Five,” she calls out, backing away, counting down the remaining seconds with her fingers. The recorded opening booms from the speakers, the show’s theme playing behind it. Smyles cues Garrard as the opening ends. Garrard McClendon’s future is about to begin.

In case you can’t tell, I’d never been on the set of a live TV show—the no-safety-net tension these professionals handle with such calm every day. I only got to go because we’re publishing a feature on Garrard in the next issue of Wabash Magazine, and our writer and primary photographer, Evan West, who had already finished the first interviews, couldn’t make it because of his assignments for his day job with Indianapolis Monthly. So I went as back up. The fun part—taking a few photos and notes, getting to meet for the first time an alumnus I’ve corresponded with many times and greatly respect.

That Garrard let us be there at the very first show—when anything can go wrong—says something about his confidence and much about his feelings for his alma mater.

Here’s what he told me after that show—which the cameraman said went “like butter,” and which put smiles on the faces of the producer, director, and floor director alike.

“Wabash College taught me how to critically think, and that’s such a valuable thing for a student and adult to have. Drs. Thomas Campbell, Warren Rosenberg, Tobey Herzog, and Horace Turner, Robert Johnson, they all mentored me at such a high level when I was 18 and 19 years old, because they saw something in me that I couldn’t see. They’d pull that out in the classroom—say, ‘Come on Garrard. You’re better than that.’ ‘Come on, Garrard. You’ve got to read the material more critically, go deeper.’

“And that’s what I do on this show. This show is a Wabash experience.”

Evan’s article in the next Wabash Magazine will catch you up on Garrard’s story in-depth. But for me, standing in that studio and watching this man stand and deliver this first broadcast of his new show—only months after his second talk show was cancelled, barely a year after his parents were murdered, and only months after their killers were sentenced—gave new meaning to the phrase “Wabash Always Fights.”

Check out the show’s Web site.

3 comments on “McClendon’s “Off 63rd” Premieres in Chicago”